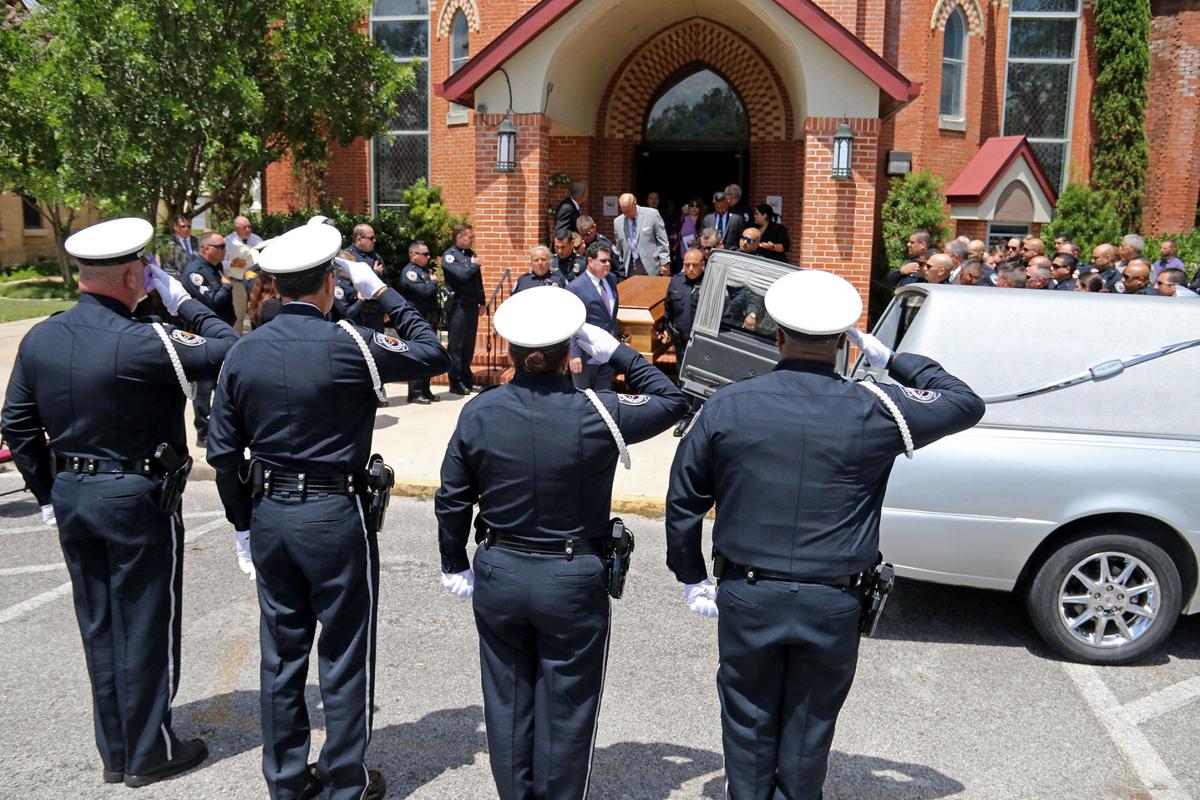 The Seguin Police Department honor guard salutes and law enforcement officers and firefighters from around the area stand watch as Seguin Police Officer Paul Blea is carried from the church during his funeral on Tuesday, July 16, 2019 at St. James Catholic Church. 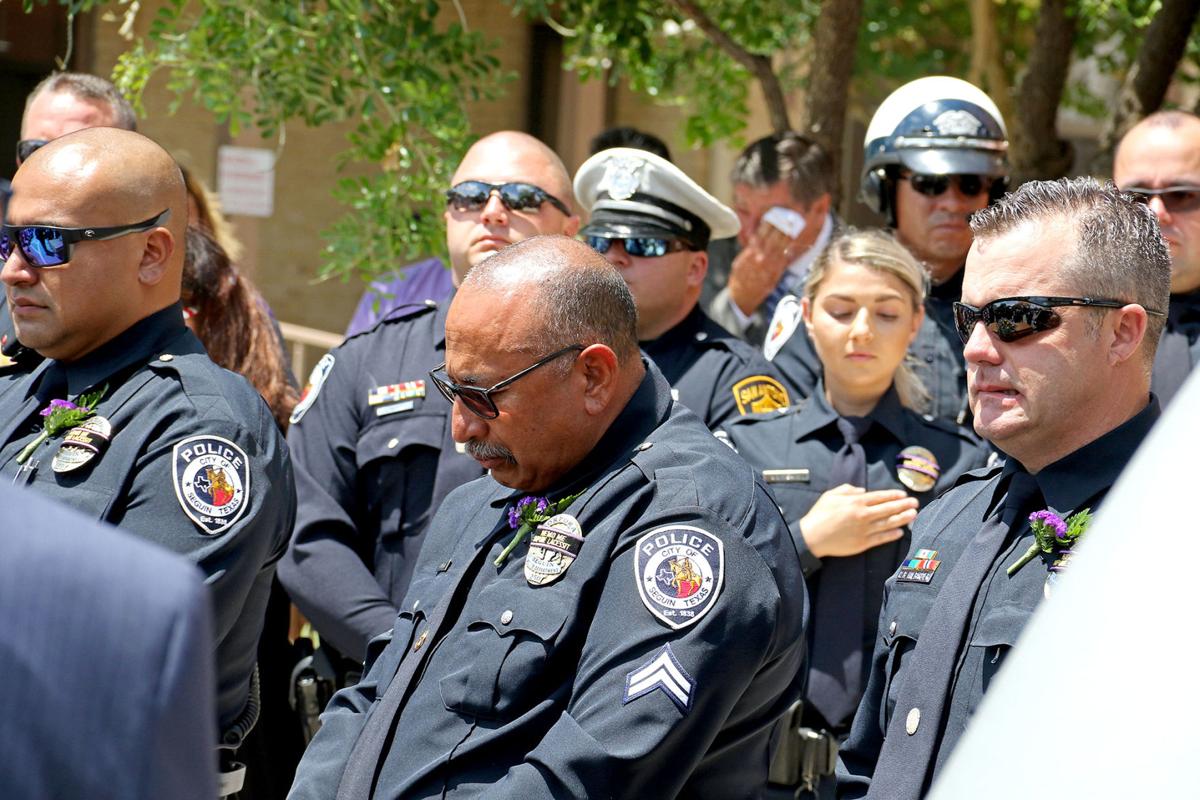 Seguin police officers solemnly listen and fight back tears as the last call for service for Seguin Police Officer Paul Blea was read out on the police radio following his funeral on Tuesday, July 16, 2019 at St. James Catholic Church.

The Seguin Police Department honor guard salutes and law enforcement officers and firefighters from around the area stand watch as Seguin Police Officer Paul Blea is carried from the church during his funeral on Tuesday, July 16, 2019 at St. James Catholic Church.

Seguin police officers solemnly listen and fight back tears as the last call for service for Seguin Police Officer Paul Blea was read out on the police radio following his funeral on Tuesday, July 16, 2019 at St. James Catholic Church.

In his 24 years of service in multiple different capacities with the Seguin Police Department — patrolman, detective, D.A.R.E. officer and instructor — Paul Anthony Blea undoubtedly responded to hundreds upon hundreds of calls.

Blea responded to each of those calls offering exemplary service and did so with a zeal many knew he showed when performing the work he loved. However, he recently answered a call he may not have been so eager to respond to, but did it just as honorably, his longtime friend and fellow law enforcement officer Detective Moses Morales of the Cibolo Police Department said.

Morales was one of several people who spoke glowingly and offered prayers and condolences Tuesday morning at Blea’s funeral. The funeral began with a rosary followed by a Mass of Christian burial at St. James Catholic Church.

Blea died Friday while recovering from an open-heart surgery procedure. The surgery took place about a month ago and things were looking good, leading Blea to have a date of Aug. 1 to return to the police department. He didn’t make it back.

He left behind his mother Juanita Blea; daughters Miranda Blea and Judi Blea; sisters Annette Smith, Barbara Strey and Catherine Gentry, as well as many other family members and friends.

The Catholic Mass of Christian Burial was filled with prayer and song commemorating the life of a faithful servant to God and to the community. It was far from a completely somber event.

Seidenberger said he recruited Blea into the Knights of Columbus and was honored to be his friend. Blea always had a smile in his heart and a joke on his lips, the county commissioner said.

“He always made me laugh because he was always full of mischief, always told a joke,” Seidenberger said. “He made me laugh not because the joke was funny, but it was stupid.”

More people spoke on Blea’s behalf and some of them offered additional lighthearted remembrances.

Father Gregory Nevlud, a reverend at St. James Catholic Church, told a joke of his own. He also told those gathered for the funeral about the words Blea’s family used to describe the fallen officer.

They said he was, among other things, fun-loving, compassionate, giving, brave, always down for a laugh, as well as a lover of bird watching, cooking, all things pasta, a good steak and this country of ours, Nevlud said.

Seguin Police Traffic Officer Willie Ybarra and Blea were sworn in to begin working with the SPD on the same day, Ybarra said. He recalled the nervous excitement they felt on their first assignment as police officers here.

A sergeant told the newbies to come with him. Here it was, their first assignment and their first chances to prove themselves.

The excitement mounted as they rode in a car with the sergeant, encouraging each other along the route, knowing that they would do their best, Ybarra said. After making some turns and traveling over some railroad tracks, tension mounting the whole time, they arrived at their destination, he said.

“Lo and behold, we turn into Maria’s Taco Shop,” Ybarra said to widespread laughter. “Our first assignment was getting tacos for everybody. This donut thing is just a myth. It’s tacos.”

People attending the mass recited the Lord’s prayer and scriptures, and silently prayed under Nevlud’s direction. He pointed out that people are complex, and so Blea meant many things to many different individuals.

Nevlud asked those in attendance to hold their favorite memories of Blea within their hearts where God could find them.

God’s decision to take Blea is our loss, the loss of his family and of this community, of all the citizens of Seguin, Nevlud said.

Blea did many good deeds in his work as a police officer, SPD Chief Terry Nichols said. He recalled meeting Blea long ago and remembered him as a loving man who put family first. Blea also loved a good Cuban cigar and a “cold beverage,” the chief said.

“Finally, he loved being a cop, pure and simple,” Nichols said. “I think we’ve all heard it today. He loved serving.”

Nichols thanked Blea and thanked Blea’s family for sharing their loved one with this community. His work is now done, Nichols said.

Following the mass, Blea’s badge was retired with a final call to service on the radio.

Blea will be buried during an interment service 9 a.m. Tuesday at Fort Sam Houston Cemetery Pavilion No. 1, Nevlud said. Military honors will be bestowed upon the Navy veteran at that time.