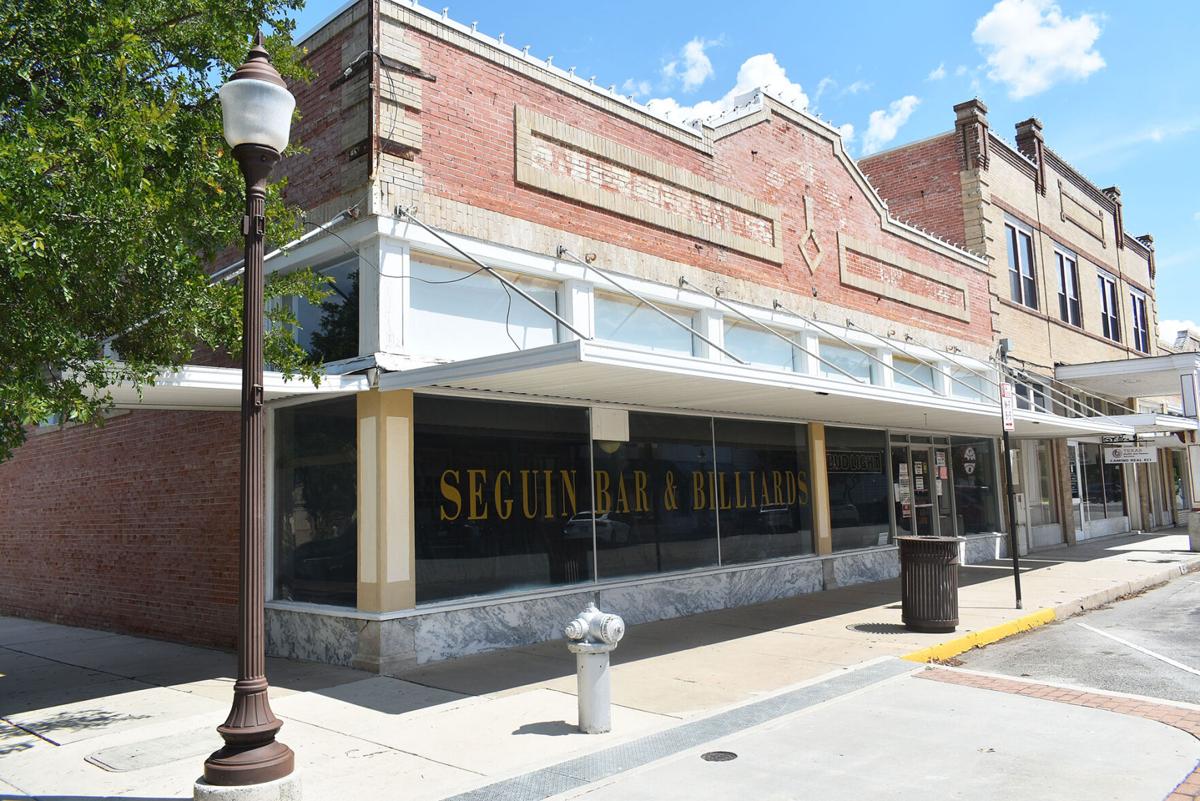 Seguin Bar and Billiards on 113 N. River St. is just one of many local bars affected by the coronavirus related shutdown. 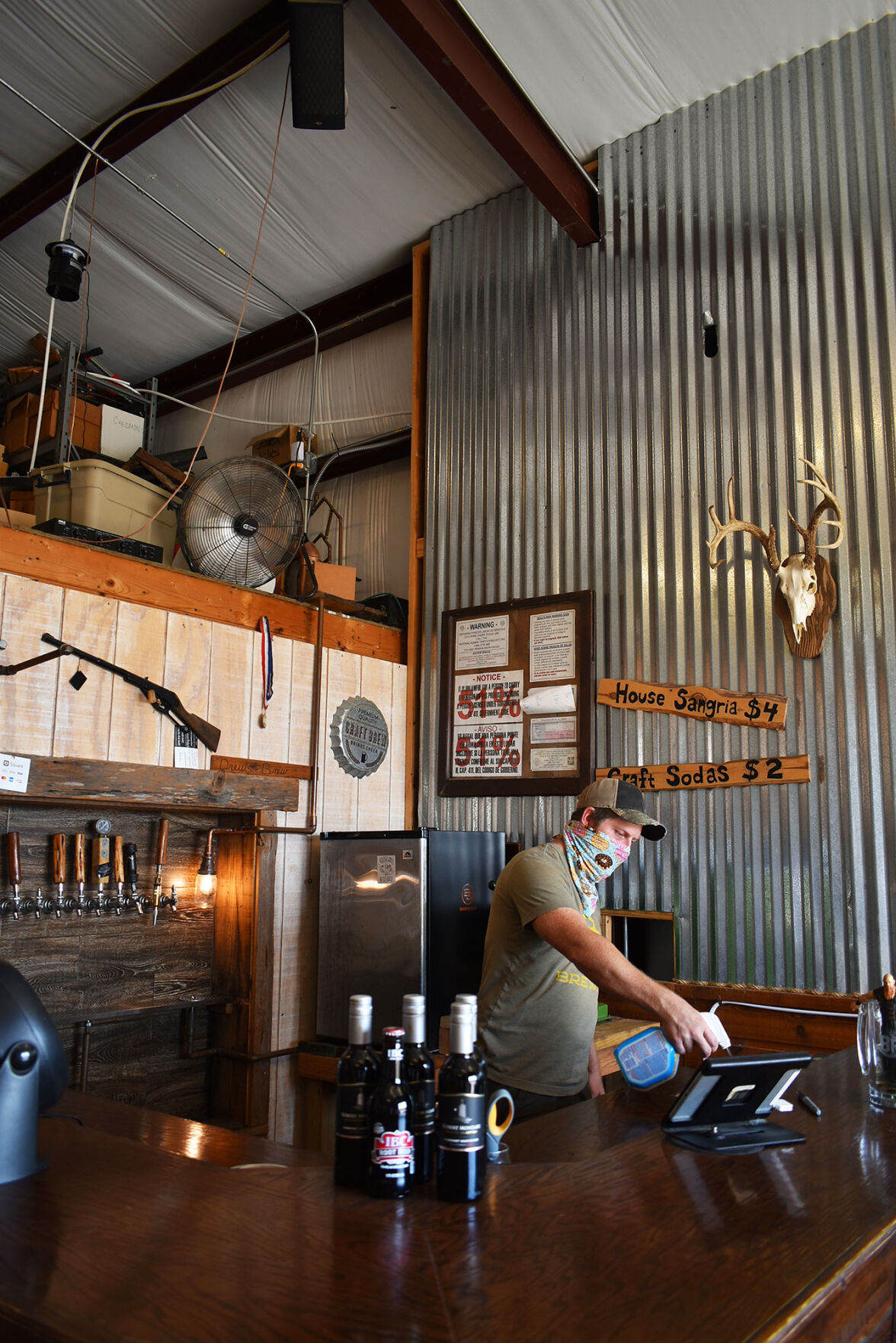 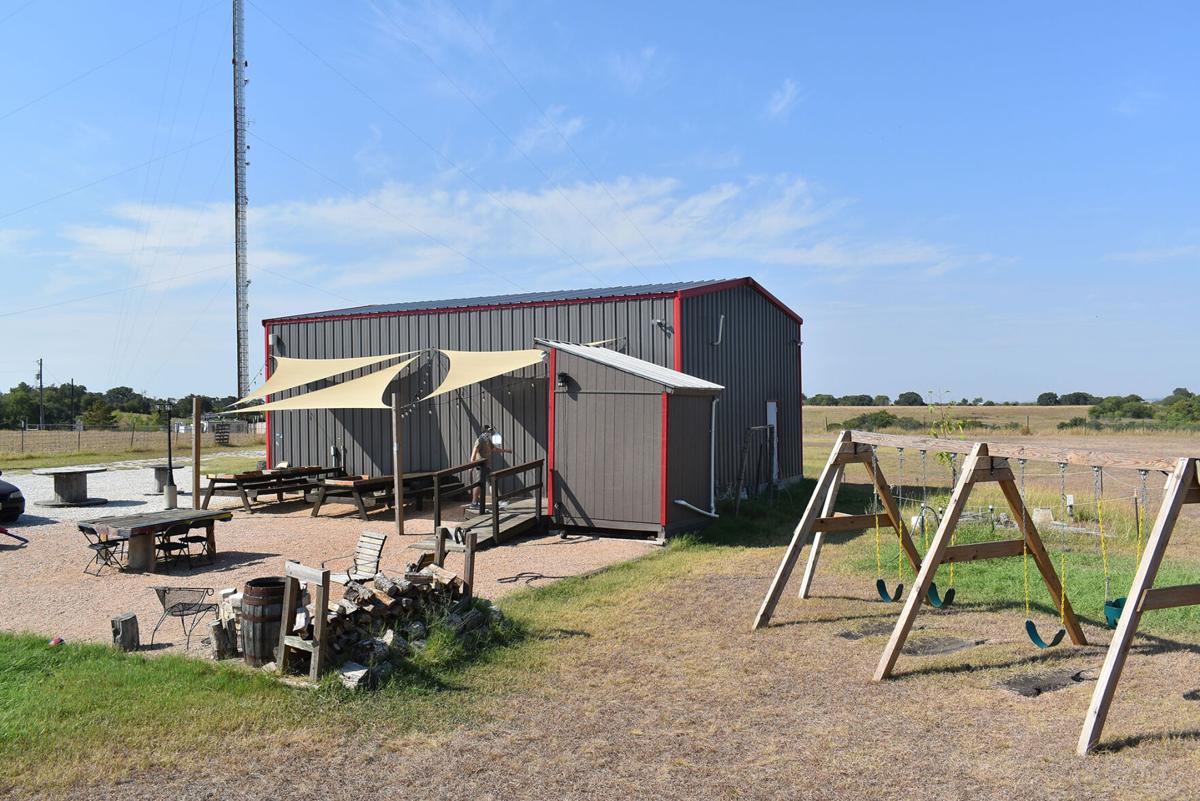 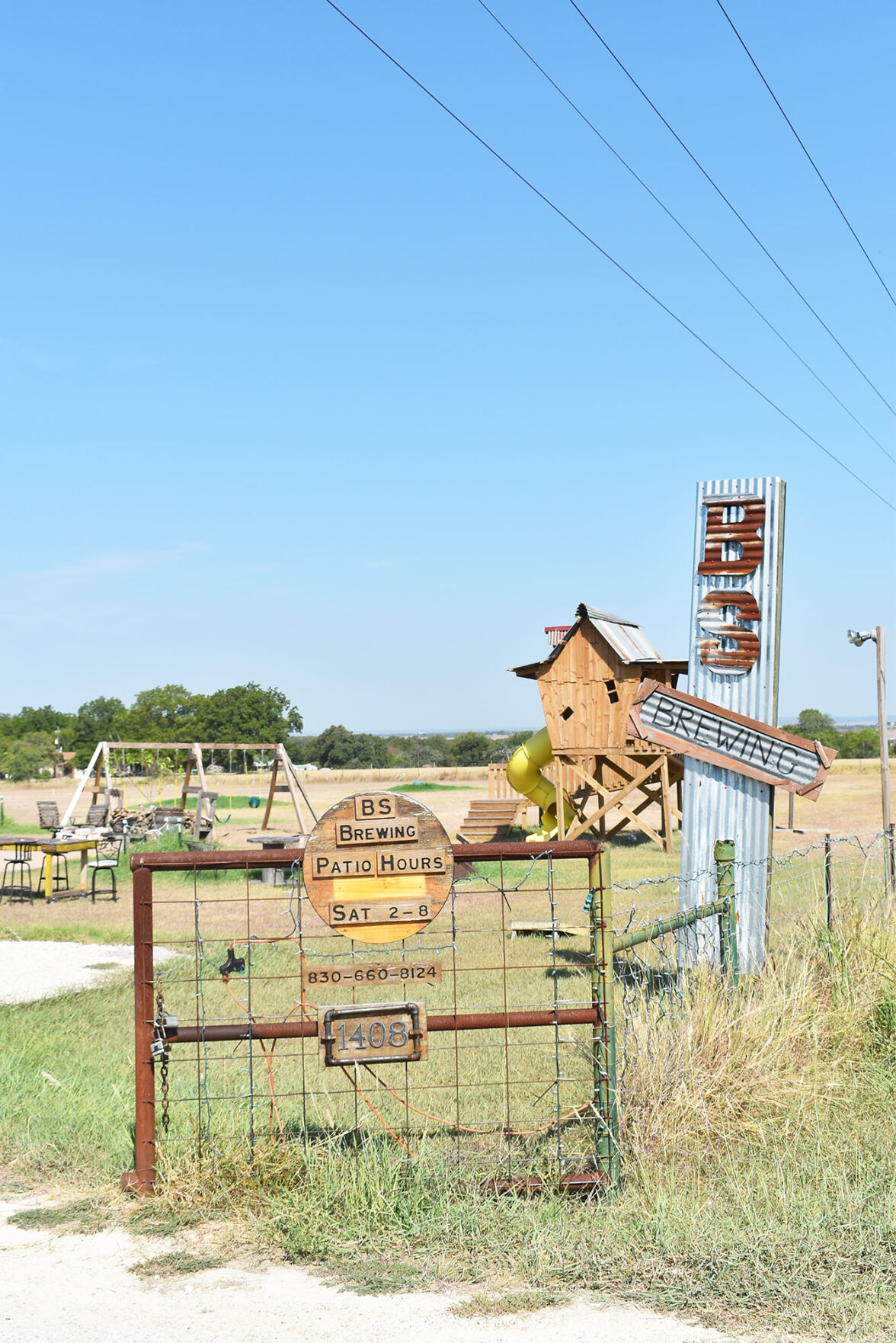 A kid friendly entertainment area sporting a Higgledy Piggledy House and swing set can be seen from the street in front of BS Brewing.

Seguin Bar and Billiards on 113 N. River St. is just one of many local bars affected by the coronavirus related shutdown.

A kid friendly entertainment area sporting a Higgledy Piggledy House and swing set can be seen from the street in front of BS Brewing.

Since the coronavirus pandemic began, bars along with tasting rooms within distilleries, wineries and breweries have struggled to make ends meet thanks to state restrictions.

And after months in the dark, the light at the end of the tunnel does not look any brighter.

In June, Texas Gov. Greg Abbott issued an executive order mandating the closure of bars and similar establishments whose alcohol sales exceeded more than 51% of their income, allowing them only to provide delivery and take out options.

As part of the executive order, restaurants can offer dine in services, but with a limited capacity.

To Seguin business owners like Brian Schmoekel of BS Brewing, the restrictive order has created a frustrating environment that, in his experience, has led many to question why tasting rooms and bars have been left behind while their food serving cousins can operate, to a degree.

“I’m appreciating that people are starting to realize this,” Schmoekel said. “It has become an exhausting conversation. A lot of people are still actively trying to find a logical reason, and they want to assume the government [has] our best interest at heart. [They can say] ‘there’s a safety issue here, there’s something that bars deserve to be shut down for.’ But the reality of it all is it is an accounting issue. There’s zero to do with safety.”

Schmoekel said, shaking up the business model at his brewery for the 51% rule would be a redundant task.

“If I were to buy a food truck and sink that capital, put it up outside and make it a permanent establishment, get that permitted, pay my fees and get my blue 51% sign, my operations inside this business would not change at all. It’s just paperwork, it’s just accounting, and it has nothing to do with the health and safety because nothing health and safety wise changes. Once we get these other permits, we just all of a sudden magically get to open again.”

Owner of Seguin Bar and Billiards Manuel Cevallos said the coronavirus related shutdown could be the nail in the coffin for his business that only first opened its doors in September.

“I just can’t believe it,” he said. “This was a lifelong dream of mine to open up a pool hall because me and my daughter were always involved in pool, and now that it has finally become a reality, this happened. I don’t know how much longer I can go on this way, but I don’t want to give up, and then boom, find out in the next couple weeks they will allow us to open.”

For months Cevallos said he has banged his head to the ground looking for ways to keep Seguin Bar and Billiards afloat, but the ever evolving treatment of the industry has made it difficult to adapt.

“We’ve put a lot of thought and are trying to plan for when they open up again,” he said. “We’re thinking we’re going to put plexiglass up where the pool table area is and where the seating area is put plexiglass up there and separate the tables [as well as] no dancing. So it’s possible. I wish I had the power to be able to speak to Governor Abbott’s office to say that it is possible, just like restaurants are doing it.”

Since the early days of the first shutdown, bars and similar establishments found ways to offer dine in through various loopholes.

One of these ways was the sale of food at the establishment; however, now even that loophole is sealed, Blue Lotus Winery/Texas Mead Works owner Melissa Poole said.

“They are allowing people to become restaurants, but they want pictures of a commercial kitchen – they’re regulating what is an entree, things like that. You can no longer just do chips and cheese and crackers,” she said. “They want actual entrees and photos of commercial kitchens, and it’s ridiculous. We shouldn’t have to be jumping through those hoops.”

Adding a full blown kitchen to any establishment is a costly gamble, especially with the unknowns surrounding the industry’s fate, Cevallos said.

“Opening up a kitchen takes a lot more money,” he said. “There are codes you have to meet, and it’s not cheap. I was thinking about talking to the city about food trucks because I have an area where they can park, but I don’t think the city would go for that either.”

Many bars, breweries, wineries, and distilleries have more than enough room to allow for six foot social distancing; however, the state has mismanaged the industry and created a double standard in the process, Poole said.

“If there’s some bars or winery tasting rooms that are not abiding by CDC regulations, that should be handled not as the government shutting down an entire industry,” she said. “… They’re basically saying, if you have a restaurant with your wine or tasting room, you can pack as many people as you want to in there, and you’re not going to get COVID. But if you’re just drinking alcohol, then you’re going to get COVID, and we’re shutting you down.”

Cevallos said many people have looked to restaurants to fill the need that local watering holes have left empty.

“There are places that are considered restaurants because supposedly 51% of the sales are more food, but nowadays it’s not, because people just go there eat a little something and then sit there and use it like you would a bar,” he said. “I know people that go in and eat at 5 p.m. and then leave at 11 p.m. when the [restaurants] close. I don’t know why we can’t just open and operate like a restaurant.”

Poole argued Abbott’s statements during a recent press conference in Beaumont, where he said customers do not follow mask mandates and social distance recommendations while intoxicated.

“He came out saying that if people are in bars, they’re intoxicated,” she said. “They get so intoxicated that they forget and they don’t wear their masks. Well, if you know anything about TABC, you cannot serve anybody that is intoxicated, period. That’s the law.”

“When we get our liquor license, it’s already in the paperwork that it is illegal for us to serve somebody to the point of being intoxicated,” he said. “So that defense as to why they don’t want to open up bars, its already taking the few bad apples and applying it to everybody.”

Schmoekel said the state has failed to provide evidence to back up the bar shut down.

“The governor has not listened to petitions [and] not answered the questions,” Schmoekel said. “They have been asked repeatedly to show proof. They’re saying that restaurants are safer and that bars are the problem – we need to see statistics, we need to see how you have proof of these conclusions, and they have failed and ignored and not provided any of that.”

According to a survey done by the Texas Craft Brewers Guild more than a month ago, one in three Texas breweries are believed to be permanently closed over a three month span, and two in three breweries are expected to die out by the end of the year.

The death rate of wineries is not far behind that of breweries, and the industry is barreling towards a point of no return, Poole said.

“Not everybody [will last], definitely not in another three to six months,” Poole said. “There’s a lot of bigger people than us that are having to scale back on workers. [Also] people are not going to want to raise grapes anymore. There’s a number of wineries’ tasting rooms right now that are throwing in the towel because they cannot operate under these circumstances. There’s a number of breweries. If you look out there, there’s breweries going under all the time.”

There are multiple ways to help wineries, breweries, distilleries and bars, and it begins with talking to a local Congressman, Poole said.

“There is a hashtag called #SaveTexasWineries that people can donate to and basically what it is is having people write the Governor and do it legally as far as opening up tasting rooms and separating tasting rooms form bars,” she said. “And then, of course, support your local winery, brewery, because they’re being closed more than they are being able to open this entire year.”

Joe Martin is a staff writer for the Seguin Gazette. You can e-mail him at joe.martin@seguingazette.com.

The big question is, how much longer are Americans going to put up with this? The land of the free. The home of the brave. November 3rd can't get here fast enough.

Has the Bait & Brew in nearby McQueeney closed for good? Their Facebook page has been taken down so I suspect it will no longer be in business.

It is what it is. CoVid-19 cures STUPID, but stupid doesn't cure anything.