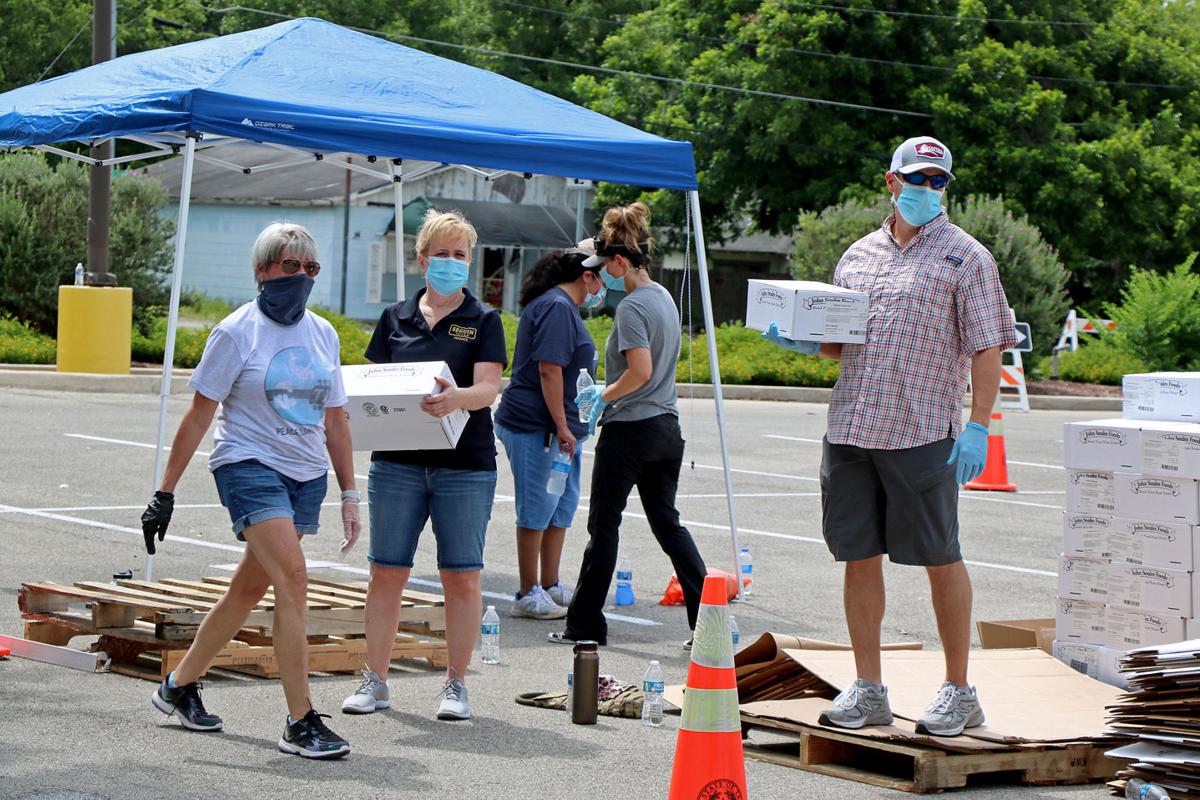 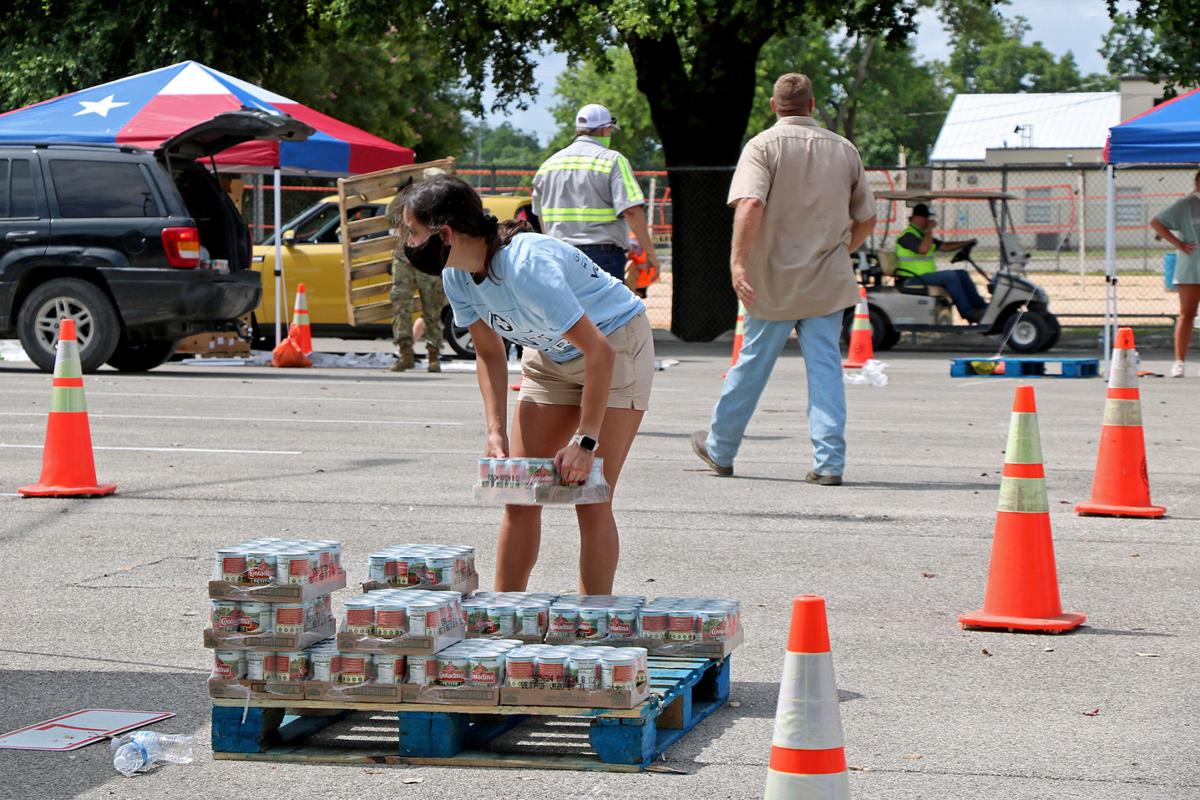 A volunteer lifts a case of canned food to place in the back of a vehicle during the food distribution day on Thursday, une 18, 2020 at the Seguin Events Complex - Coliseum. 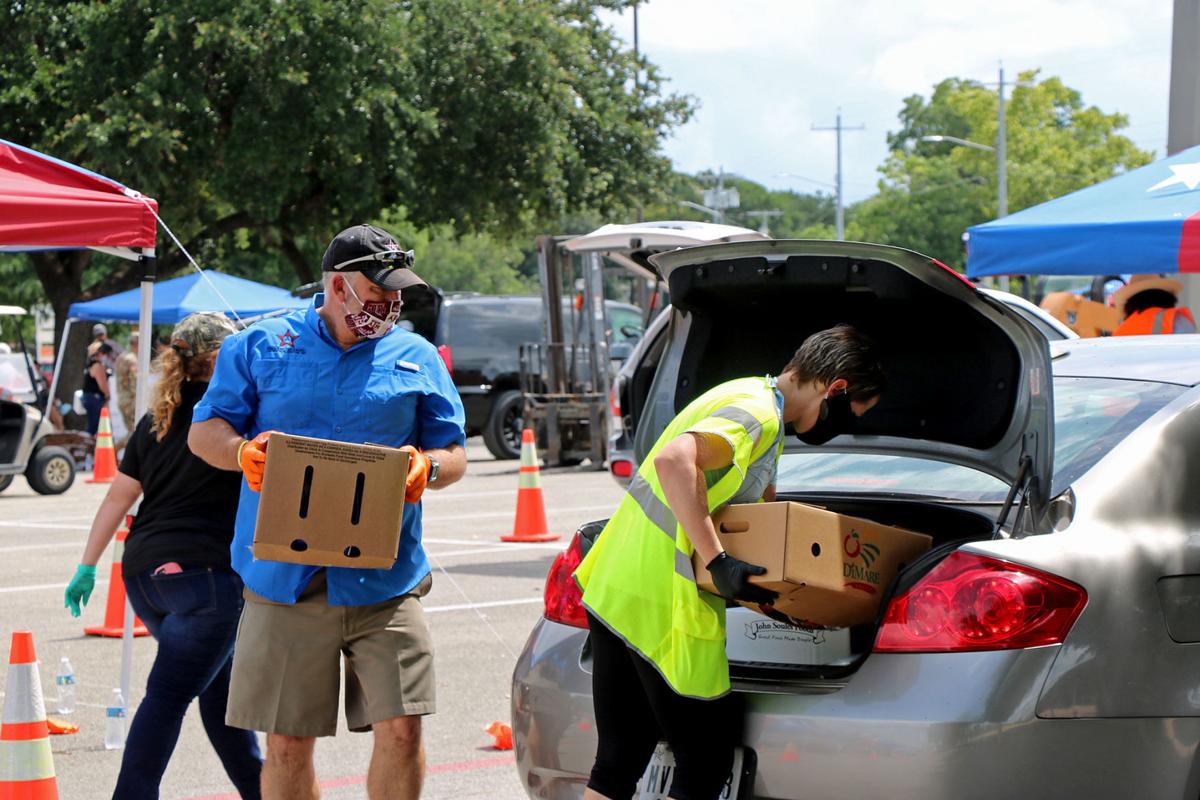 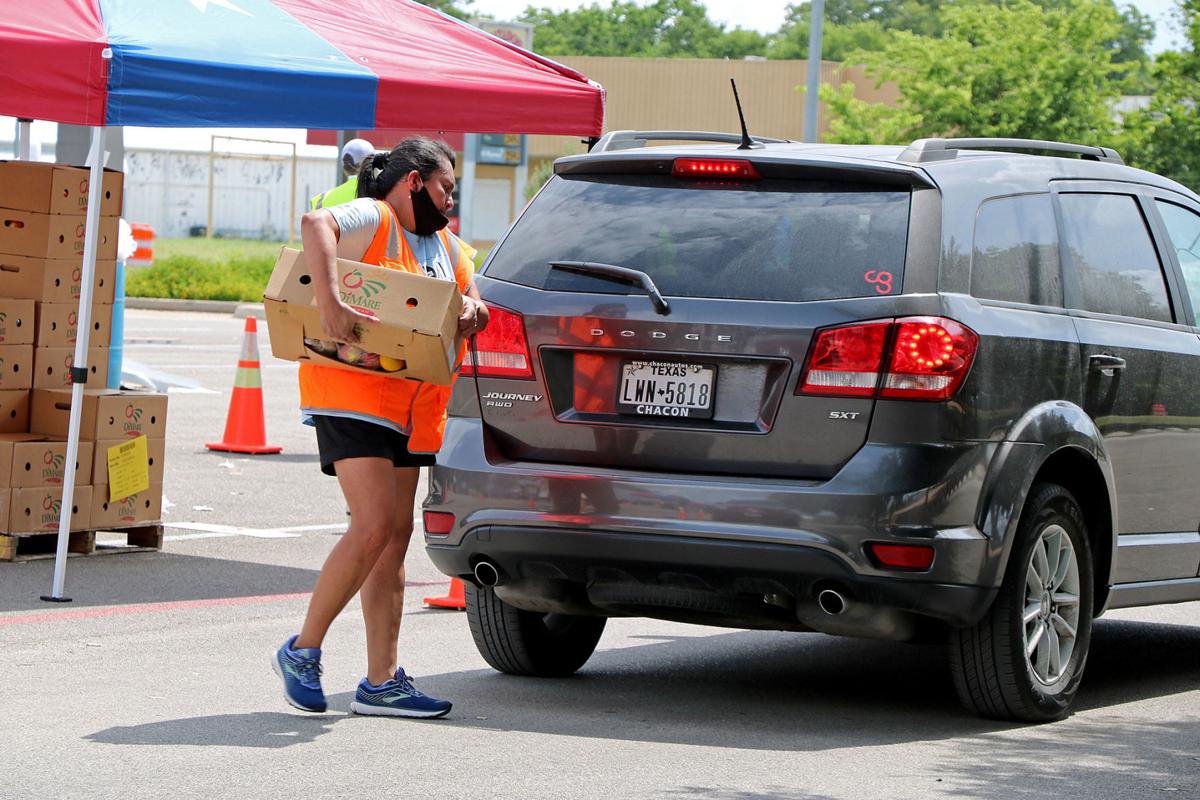 A volunteer loads a box of food into a waiting vehicle during New Braunfels Food Bank distribution on June 18, 2020 at Seguin Event Complex - Coliseum.

A volunteer lifts a case of canned food to place in the back of a vehicle during the food distribution day on Thursday, une 18, 2020 at the Seguin Events Complex - Coliseum.

A volunteer loads a box of food into a waiting vehicle during New Braunfels Food Bank distribution on June 18, 2020 at Seguin Event Complex - Coliseum.

Hundreds of Seguin residents restocked their homes on Thursday with the help of the city, local hospital and area food bank.

Dozens of volunteers stood in lines placing about 120 pounds of food items in the backs of vehicles during the food distribution event at the Seguin Events Complex — Coliseum.

“This is the largest turnout we’ve had since beginning our food distribution in Seguin.” said Monica Borrego, executive director of the New Braunfels Food Bank.

The large event was the culmination of a partnership between the city of Seguin, Guadalupe Regional Medical Foundation and the San Antonio/New Braunfels Food Bank.

“We just had a great turnout from families coming to get help and volunteers that wanted to help their community,” Borrego said. “Even though it’s a time when we’re all feeling at risk, we still had a lot of people come support us, which helps our events run smoothly and run well. We just really appreciate the volunteers for being there.”

“We distributed 92,000 pounds of food in two hours, which is amazing,” she said. “It was so rewarding to see everyone come through. They seemed very appreciative of what we were doing for them.

“It felt good for us to be able to help the community in this time of need during this pandemic. We understand there are a lot of people right now that have lost their jobs through all of this and they really need this help.”

The sheer number of volunteers and work put in by the city’s Public Works Department helped make the event run smoothly, especially in the registration cues, Sourdellia said.

“Public Works director John Donnelly led the effort on the logistics of getting everything set up, on all of the cones and how the flow was going to happen,” she said. “It takes them about four days to get everything set up out there, to really get it going and make sure everything flows properly and flows well.

It is a lot of work, but it is very rewarding in the end.”

The city hopes to partner again in the near future with the hospital and food bank on another distribution event.

Katy O’Bryan is a staff writer for the Seguin Gazette. You can e-mail her at katy.obryan@seguingazette.com . Felicia Frazar contributed to this story.

EKAF NEWS in the picture is 8 lbs per box of bone in frozen RAW chicken big letters KEEP FROZEN sitting on a pallet in the summer sun. same with the liquid egg in cartoon again (KEEP FROZEN.) Some rocket scientist put cold vegtables in paper bags the bottoms got wet and busted. 1/2 Rotted purple onions and blighted green oranges. 10 lbs of grapes. No way it was 120 lbs a person. At Least rise to the level of Trump University diploma. Before you mouth off about being ungrateful, you come and eat it. Already planning the next event, The Seguin Dumpster Dive.

Claxon, be careful your comment may be deemed as hate speech and censorable by the out-spoken Left!

Didmny, LOL only wait to hit left in this county is making right hand turns upside down. I get up on my soapbox... Actually I was prepared. A 50 gallon ice chest , I went and bought dry ice as soon as I saw the egg mix. I feel sorry for those that had to throw theirs out cause they couldn't get it in a freezer, They had about an hour before they had a choice to cook it. The egg mix I already started baking and I will try and save the rest as omelets and freeze. I have three pressure cookers. but chilling is going to be a marathon musical chairs. I was just venting on behalf of those who need it and are going to regret having to throw it out in a few days. Thanks for the response it aint like we can have face 2 face discussions and now stupid is going to be far more dangerous than the virus.