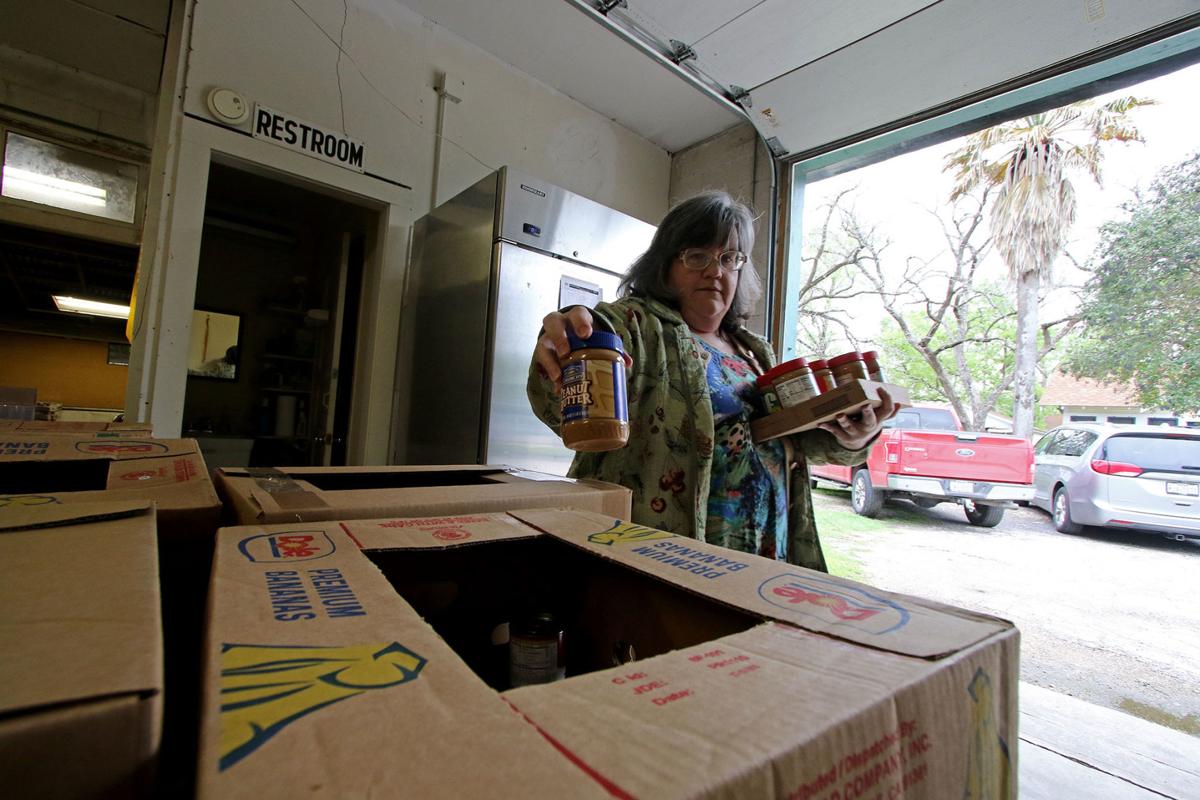 Patty Buckley puts jars of peanut butter into boxes of food on Saturday, March 21, 2020 at the Seguin Christian Cupboard. 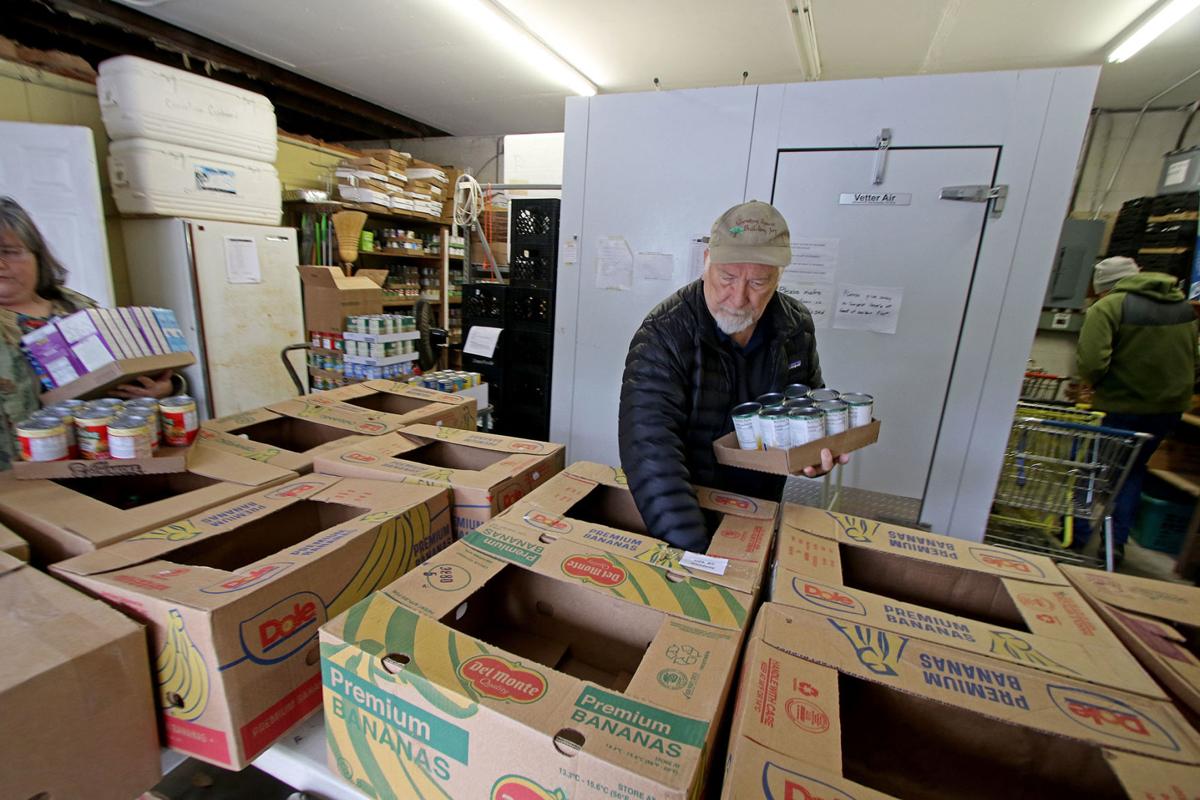 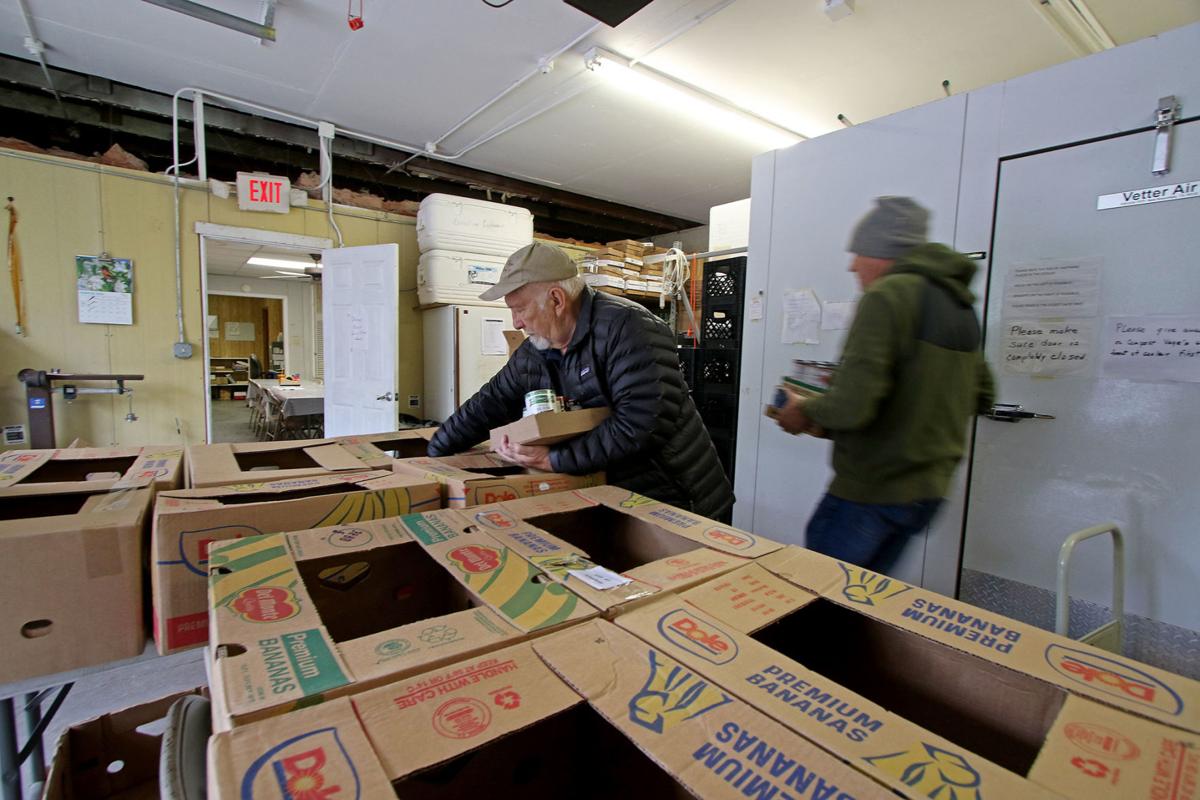 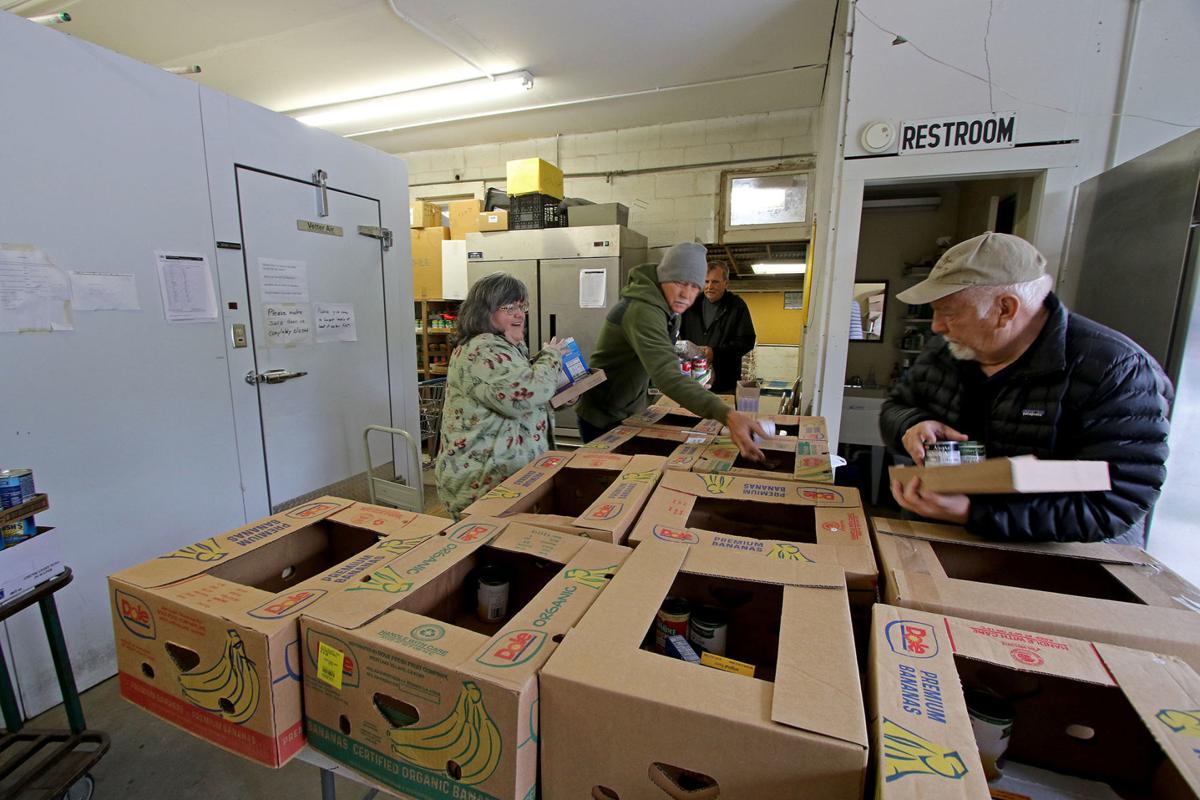 A host of volunteers help fill boxes with food for community members in need on Saturday, March 21, 2020 at the Seguin Christian Cupboard. 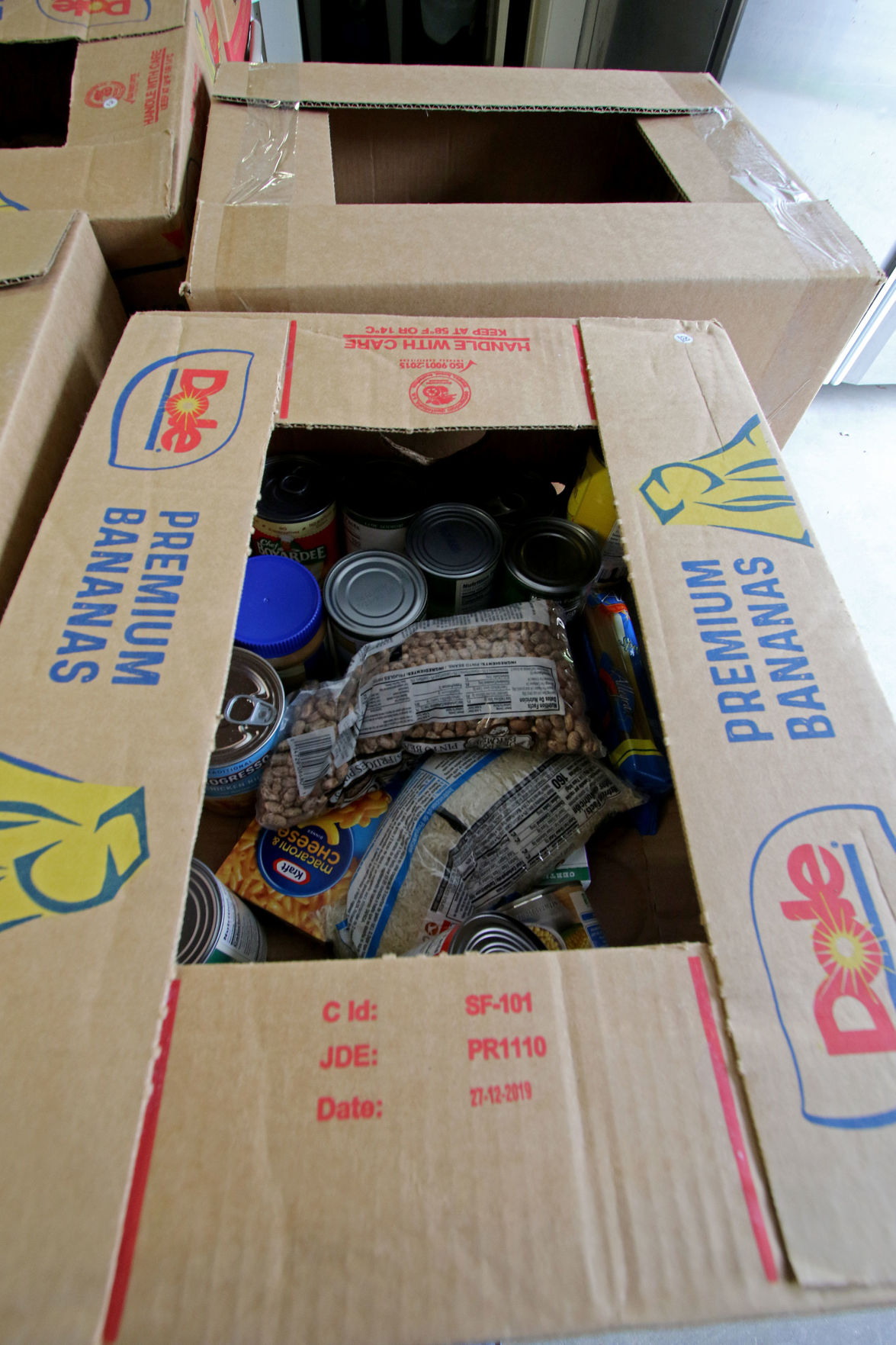 A box is filled up with dry goods at the Seguin Christian Cupboard on Saturday, March 21, 2020.

Patty Buckley puts jars of peanut butter into boxes of food on Saturday, March 21, 2020 at the Seguin Christian Cupboard.

A host of volunteers help fill boxes with food for community members in need on Saturday, March 21, 2020 at the Seguin Christian Cupboard.

A box is filled up with dry goods at the Seguin Christian Cupboard on Saturday, March 21, 2020.

The novel coronavirus pandemic sweeping the globe is taking a toll on different parts of the community in varying ways.

“March 26 will be our last day of operations. We will reopen April 6,” she said. “It’s really trying times.”

The cupboard will continue accepting donations, Lee said. And if things improve or if there are any changes in plans, she will notify the public, she said.

She worried, though, about people who won’t be able to access her organization’s services in the interim.

People in this area have responded in various ways to the threat of the spread of the novel coronavirus that causes COVID-19, a respiratory illness leading to severe, flu-like symptoms in many people across the world and sometimes death.

As word of the virus’ spread poured in, shoppers began making runs on area grocery stores, emptying the shelves of various items, including toilet paper, meat and dairy products.

Even before area grocery store shelves began turning up empty, nonprofit food providers began to think about the effects of COVID-19.

Eric Cooper, executive director of the San Antonio Food Bank, and his staff began considering what they could do to help those in need as word began trickling out of Wu Han, China, that the illness was spread.

The food bank began with the three Rs of disaster — readiness, response and recovery.

“In our readiness phase, really knowing at the onset of what was happening in China and knowing it was coming to the U.S. gave us an opportunity to think strategically,” Cooper said. “We started back at the first of the month giving a larger benefit to families, giving them more food. Included in that was giving them more sanitation products and cleaning supplies.”

programs to provide meals. Programs such as the Supplemental Nutrition Assistance Program, also known as SNAP or commonly called food stamps, don’t allow families to use those programs to buy things like toilet paper, hand sanitizer and other items needed during the pandemic, Cooper said.

The food bank helped get some of the items to its clients, he said.

The food bank also helped locally last week by partnering with the school district to deliver meals to families in need at Seguin ISD schools, Cooper said. Parents drove to schools and collected breakfast and lunch meals at the schools.

His organization last week saw a tremendous increase in the people it helped, Cooper said.

The food bank generally feeds about 58,000 to 60,000 people a week, he said. In responding to the effects of the spreading pandemic, the food bank served more than 80,000 people in a recent week, Cooper said.

“It’s about a 40% increase in demand,” he said. “Boy, we’re feeling it. It’s coming from all areas of our 16 counties — county judges, mayors, our nonprofits.”

Lee lauded the food service efforts at the schools, but knew there could be other hardships that prevent people from making it to the schools for meals.

“I have what I have and I’m going to give it out until I don’t have it to give anymore,” Lee said. “Then I’m going to beg the community to give more.”

She hopes the community will pitch in and provide, Lee said; but the pantry can only give what it has, she said.

She and volunteers at the pantry have faith that things there will continue to work out for the best, she said. They will continue to buy the supplies needed from the San Antonio Food Bank and other regular suppliers as long as the supply lines remain open.

One supplier to the Christian Cupboard over the years is the local HEB store, Lee said. The store continues to provides food, but is limiting order sizes for the organization, she said.

Recently, Cooper was in contact with leadership at H-E-B and the food giant assured him that it would be able to supply Texas communities with their dietary needs. However, people need to stop clearing the shelves unnecessarily and allow everyone to get what is needed without stockpiling, Cooper said a representative of the grocery chain told him.

“People just need to be, using HEB’s words, ‘Texas friendly’ and not hoard,” Cooper said. “Just get what you need and leave what’s left on the shelf for the next customer. If we do that, there won’t be a shortage.”

People in need of food assistance in Seguin and Guadalupe County may contact the Christian Cupboard or the San Antonio Food Bank for assistance, Lee and Cooper said.

The Christian Cupboard is open 9 to 11:30 a.m. Monday through Thursday and the first and third Saturday of each month at 516 N. Camp St.