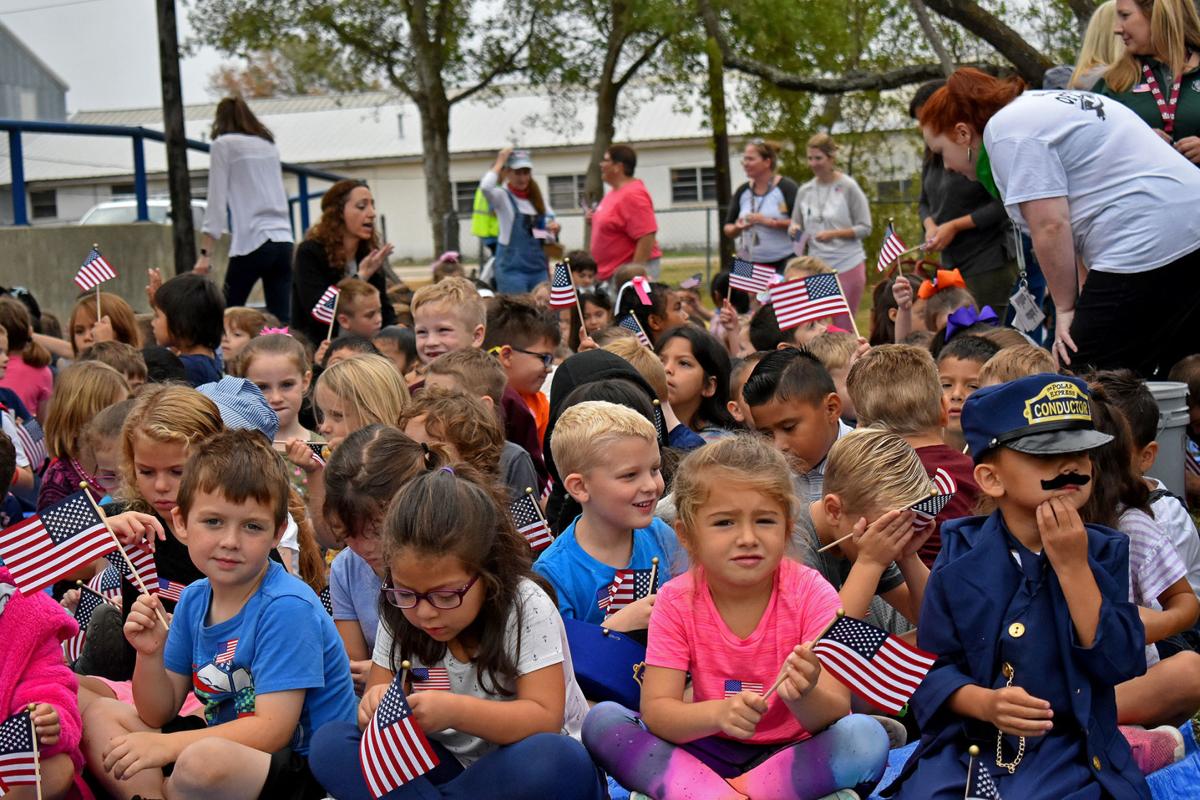 Students from the Norma Krueger Elementary Primary Campus eagerly wait for Big Boy 4014 to pass through Marion on Wednesday, Nov. 6, 2019 at the Marion State Bank. 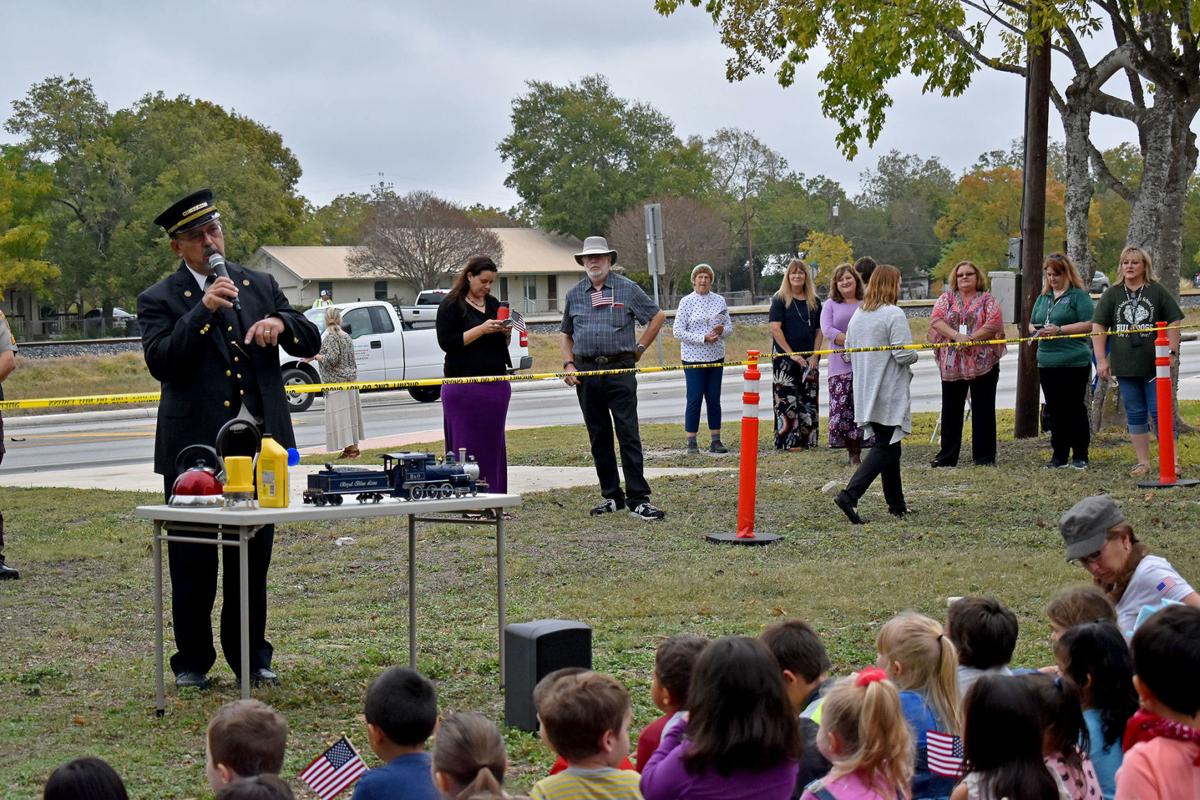 Union Pacific's Big Boy Steam Locomotive 4014 rolls into Marion during its journey from Sunset Station to Luling on Wednesday, Nov. 6, 2019 as part of the celebration of the 150th anniversary of the complete of the Transcontinental Railroad.

Joe Martin - The Seguin Gazette
1 of 2

Students from the Norma Krueger Elementary Primary Campus eagerly wait for Big Boy 4014 to pass through Marion on Wednesday, Nov. 6, 2019 at the Marion State Bank.

Robert Howell, of Spring, and Hubert Hillman walked around the tracks near the Kingsbury Road crossing, looking for the perfect spot to start their journey of following the steam engine on Wednesday.

The duo, who are former co-workers, decided to follow Union Pacific’s Big Boy 4014 on its journey from Sunset Station in San Antonio to several of its stops on the Great Race Across the Southwest during the 150th anniversary celebration of the Transcontinental Railroad’s completion.

“We’re going to hit it in several different places,” Howell said.” This is a once-in-a-lifetime viewing of this train.”

Hillman has a place in Harwood and felt Kingsbury was a good place to start.

“We’re going to chase it back to Luling, run it through Welder, run it through Flatonia,” he said. “I told him that this is wide open and it might be a good spot, so here we are.

“We’ve spent time in Silverton and have ridden the Durango train,” he said.

Looking around the site they were setting up, Howell was blown away by the amount of attention Union Pacific’s Big Boy 4014 was getting.

“Look at all of the people out here,” Howell said. “This is just incredible.”

“It is really cool to look out and see everybody lined up along the railroad track,” Hillman said.

In Marion, about 400 students from Marion ISD, and hundreds of others, looked on with smiles as one million pounds of steel rumbled through Marion Wednesday morning.

The train that drilled its way through the eyes and ears of onlookers throughout the county is known as the “Big Boy 4014.” It made its journey through the area as part of a celebration commemorating the 150th anniversary of the Golden Spike Transcontinental Railroad, Union Pacific Railroad Public Safety manager Buck Russel said.

“Union Pacific was the westbound railroad that met at Promontory Point, Utah, with the Central Pacific that came from Sacramento, California,” Russel said. “So when we met 150 years ago, that’s why the Big Boy’s out running. We retired him after around a million and a half miles back in the ’60s, and he was in a museum. But we recently rebuilt him and use him for service for special events like this year’s 150th anniversary.”

Although Big Boy holds the status of “the worlds largest steam locomotive,” the train has quite a ways to go on its trip to reenact “The Great Race Across The Southwest,” where it will cross numerous state lines ranging from its starting location in California to its final destination of Cheyenne, Wyoming, Russel said.

“What we’re gonna do is he (Big Boy) is going to end up in Houston tonight, and I think he will spend two days in Houston,” Russel said. “Then it’s going to make stops along the way like in Bryan College Station, Texarkana, then to Kansas City. Then it will make its way back to Wyoming.”

Those who gathered to watch the train’s pass through town had to wait a little longer than expected as an 18 wheeler found itself stuck on the tracks blocking the railway.

As a result, officials worked quickly to unhinge the marooned rig.

“We contacted a wrecker and were able to get it off the tracks in about 30 minutes,” Guadalupe County Sheriff’s Lt. Clint Garza said.

Hundreds of students from the Norma Krueger Elementary Primary Campus waited in anticipation for the locomotive’s imminent passing as they got the opportunity to spend their morning sitting in the grass outside of the Marion State Bank.

“We have our whole primary campus out here today, so that will be kids from pre-k, kindergarten as well as first and second grade,” Norma Krueger Elementary Primary Campus Principal Rachel Robertson said. “In total, it’s around 400 kids. I have all the administrators from Marion ISD here, helping us take care of our students. It’s great that our kids get to experience a once-in-a-lifetime event like this, so we have been super excited.”

As the children waited, they were entertained by members of the Texas Transportation Museum who donned the garb of conductors and various other railway workers.

“We came to talk to the kids a little bit about whistles and steam engines and show them how they work,” Texas Transportation Museum Secretary Bill Foster said. “Hopefully, they will get a better understanding of some other the jobs that might be available to them if they go to work for the railroad.”

As Big Boy 4014 passed, the cries of the locomotive’s horn were mirrored by the excited screams of the students.

“The engine was loud,” 6-year-old Norma Krueger Elementary Primary Campus first grade student Owen Fletcher said. “I like trains because they’re big, fun, they scare you, and they haul lots of stuff.”

“We have known about this for a couple of weeks now,” she said. “We started putting it out to parents out so they would know because of course, we needed permission slips for them to be here and the kids have been doing some activities in their classes to prep them for what they saw today. The kids have been so excited for this, and I think the teachers were just as much as excited as the kids.”

The greatest of the great steam locomotives of a by-gone era. Who cannot be impressed by their size and sound? Sounds forever embedded in the minds of many Americans such as myself. As a child, I lived near a railyard and loved the unmistakable sound of the increasing beat of the steam, drive-wheels, and whistle, as they gained momentum.