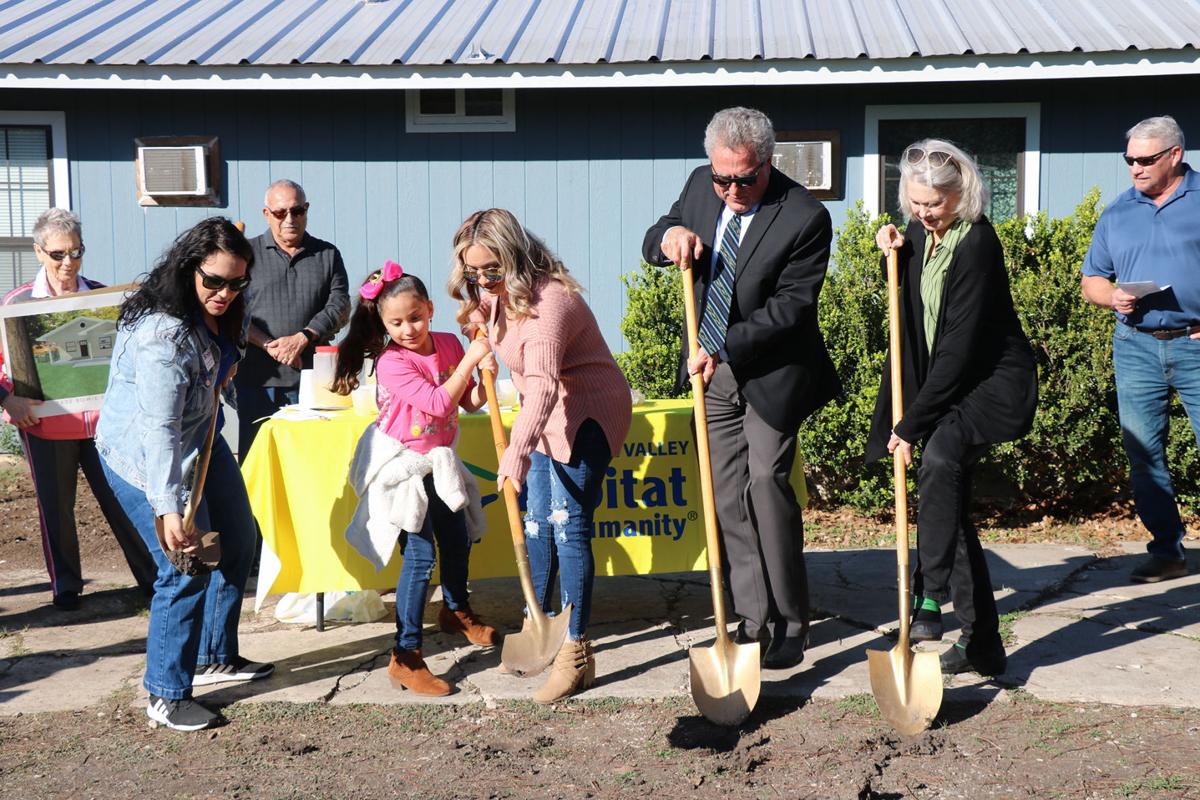 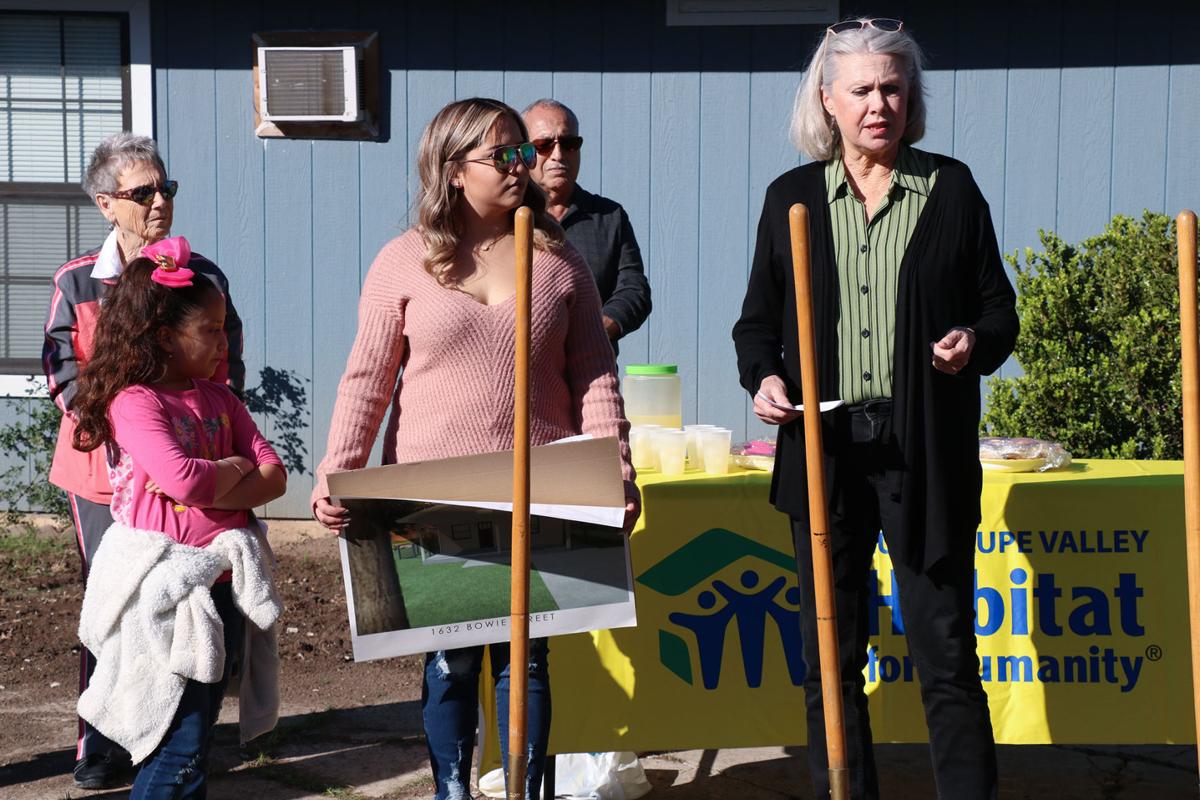 Nancy Masterson speaks on behalf of Jack Linden's family during a groundbreaking ceremony on Saturday, Jan. 11, 2020, for Guadalupe Valley Habitat for Humanity's 30th home. The home will be named, "the Jack Linden House," in his honor, and owned by Bianca Muñoz and her 8-year-old daughter, Zerenity Garcia. 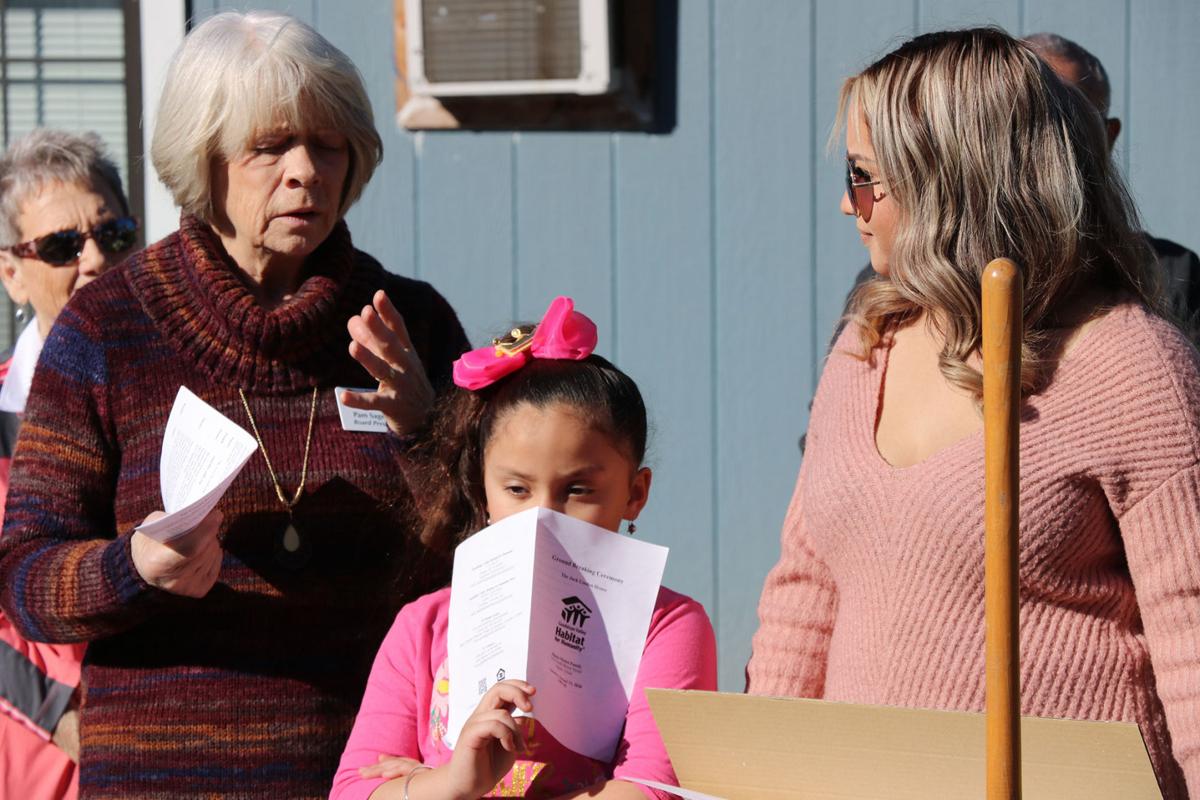 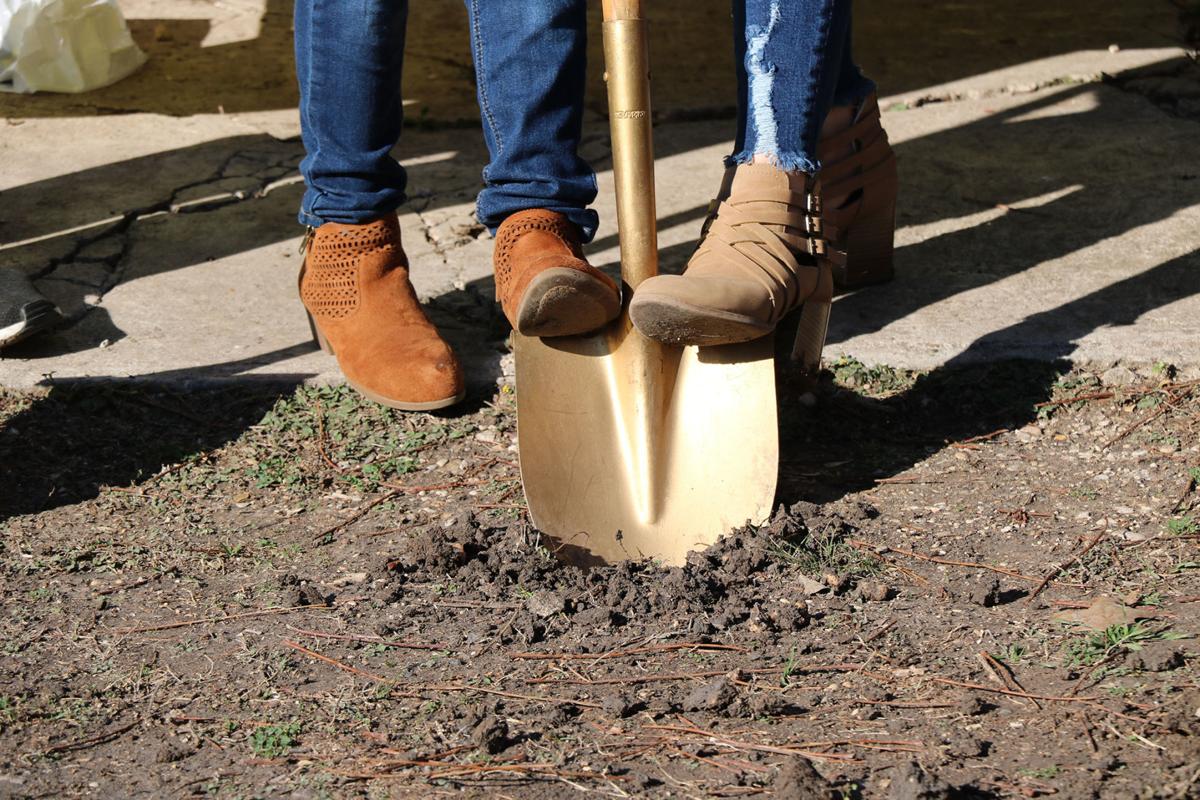 Bianca Muñoz and her daughter, Zerenity Garcia, 8, use their feet to push a golden shovel into the ground during a groundbreaking ceremony on Saturday, Jan. 11, 2020 for Guadalupe Valley Habitat for Humanity's 30th home. Muñoz and her daughter will become owners of the home named the Jack Linden House.

Nancy Masterson speaks on behalf of Jack Linden's family during a groundbreaking ceremony on Saturday, Jan. 11, 2020, for Guadalupe Valley Habitat for Humanity's 30th home. The home will be named, "the Jack Linden House," in his honor, and owned by Bianca Muñoz and her 8-year-old daughter, Zerenity Garcia.

Bianca Muñoz and her daughter, Zerenity Garcia, 8, use their feet to push a golden shovel into the ground during a groundbreaking ceremony on Saturday, Jan. 11, 2020 for Guadalupe Valley Habitat for Humanity's 30th home. Muñoz and her daughter will become owners of the home named the Jack Linden House.

With their feet on a golden shovel, Bianca Muñoz and her 8-year-old daughter, Zerenity Garcia, pushed it into the ground and became one step closer to their dream of owning a home.

They helped break ground on Guadalupe Valley Habitat for Humanity’s 30th home, named “The Jack Linden House” during a groundbreaking ceremony on Saturday.

Muñoz, who works as a PBX operator at Guadalupe Regional Medical Center, said she felt overwhelmed and ecstatic when she found out she was selected in November 2019. She was surprised by Guadalupe Valley Habitat for Humanity representatives while at work. During the ceremony, Muñoz held a picture of how her home will look like when it’s finished.

“I’m in love with it,” she said. “This home means I’ll be able to have a home for my daughter for the rest of her life. That’s the part that is going to be the joy of everything.”

Mayor Don Keil congratulated the family for the designation of a Habitat homeowner.

“It’s a new year, which means a new house, a new life and all kinds of great things are going to be happening to you,” he said. “This is great, and I want to congratulate you for being able to qualify for this.”

Being selected and qualifying is not an easy thing to do, he said.

“That means you’re a responsible adult, that you are going to contribute to society and make this a great neighborhood,” he said. “We really do appreciate all the hard work that you have done.”

Breaking ground on her future home felt like a new beginning, Muñoz said.

“I can’t wait to actually start actually building the house,” she said. “This is going to be our lifetime home.”

“They have to be here pretty much every weekend during the entire build,” she said. “Our homeowners love it. They say they learn so much. And even volunteers say, ‘I know how to do repairs in my home.’ So, it’s really cool they to get to learn how to do everything.”

Muñoz is excited to begin.

“That’s the fun part,” she said. “I’ve actually started helping out on the other ones already and I’ve had a lot of fun doing them. I just can’t wait to get started on mine.”

Muñoz’s home will bear another name, “The Jack Linden House,” in tribute to one of Guadalupe Valley Habitat for Humanity’s past presidents and long-time volunteers.

Linden recently died, but everyone in the community speaks very highly about him, Zwicke said.

“I’m glad that we can honor him in this way,” she said. “That’s just really special for his family to know that he was a man that served our community and that his legacy lives on here in Seguin.”

Nancy Masterson spoke on behalf of Linden’s family during the ceremony and thanked all who came out.

“Jack was on the family selection committee before he became president,” she said. “There’s no more fitting role for Jack than to be involved in selecting a family because he deeply cared about the intrinsic worth and dignity of every single person in this community. I just want to say thank you so much on behalf of the family for this lasting tribute to Jack.”

With ground broken on the home, the build process can begin. The next step for the house is to work on the slab, Zwicke said.

“We’ll build the walls and bring them out here and put them up and then they’ll get going,” she said. “It’ll be done probably by summertime.”

For those interested in getting involved with the organization, there are volunteer opportunities in their store and on their build sites, Zwicke said.

“You can come volunteered at the job site every Thursday and Saturday from 8 a.m. to 12 p.m.,” she said. “We’re always looking for people to serve on our family selection committee. It’s such a worthwhile mission.”

The application process for being selected as a Habitat for Humanity homeowner also opens in February, she said.

“We encourage people just to apply and take a chance,” she said. “Feb. 1 through the 29, we’ll be accepting applications.”

To learn more about applying or volunteer opportunities, visit the Guadalupe Valley Habitat for Humanity website at www.guadalupevalleyhabitat.org .

Steffanie Agnew is a staff writer for the Seguin Gazette. She can be contacted by e-mail at steffanie.agnew@seguingazette.com .