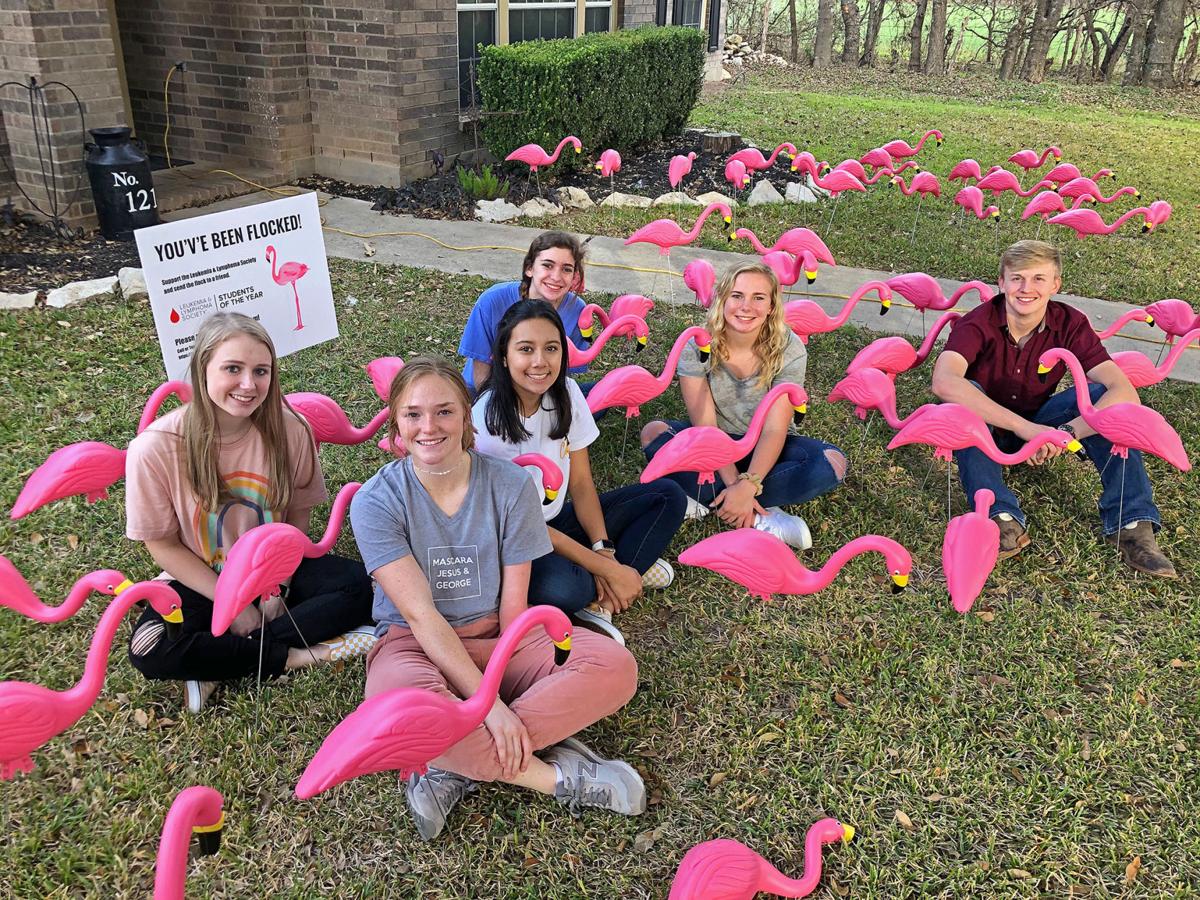 A group of Navarro students sit among their flamboyance of flamingos for the Leukemia & Lymphoma Society. 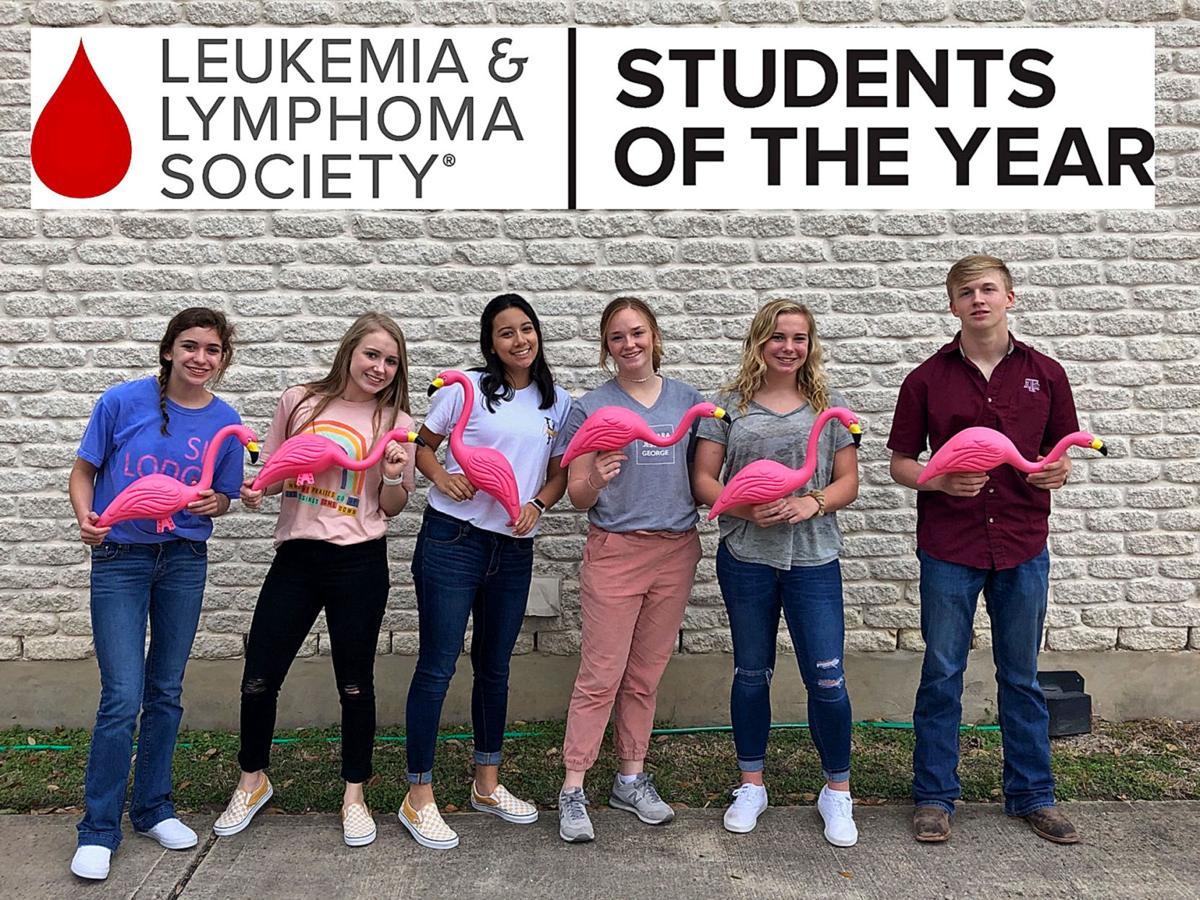 A group of Navarro students stand with their flamboyance of flamingos for the Leukemia & Lymphoma Society. 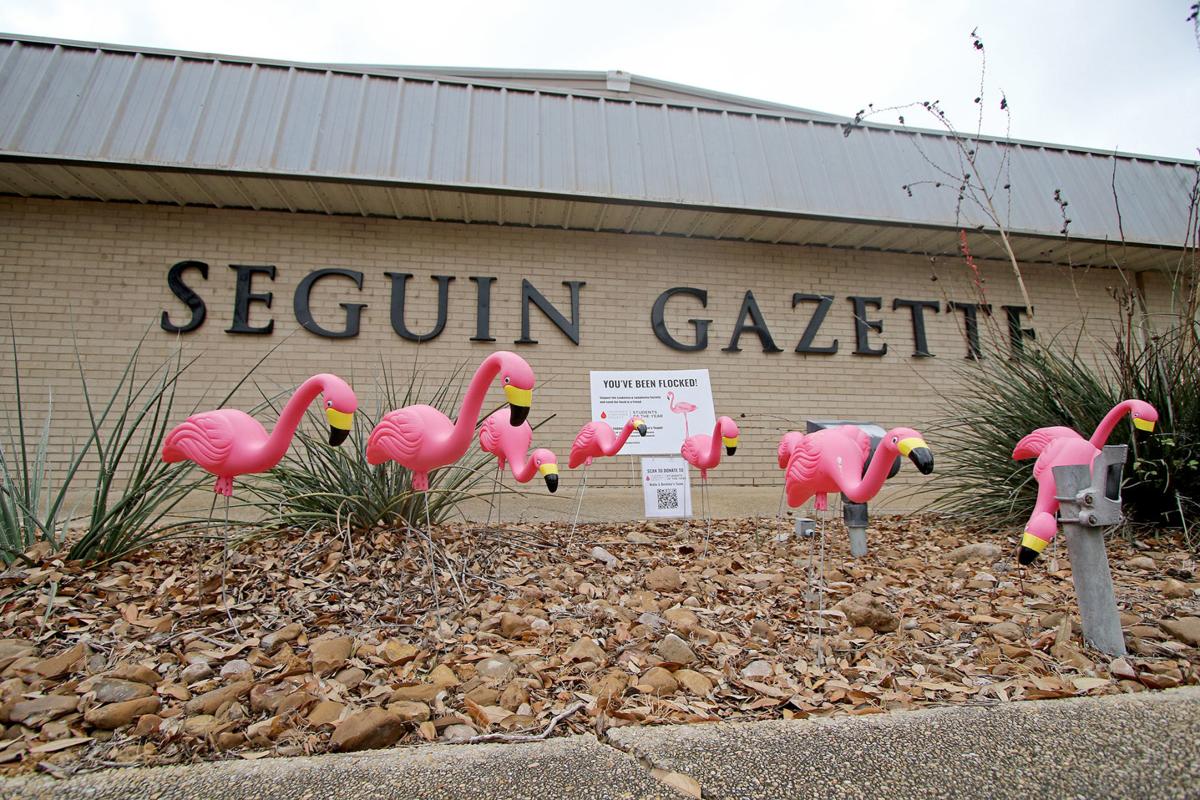 The Seguin Gazette was flocked with flamingos on Sunday, Feb. 9, 2020 by a group of Navarro students raising money for the Leukemia and Lymphoma Soceity.

A group of Navarro students sit among their flamboyance of flamingos for the Leukemia & Lymphoma Society.

A group of Navarro students stand with their flamboyance of flamingos for the Leukemia & Lymphoma Society.

The Seguin Gazette was flocked with flamingos on Sunday, Feb. 9, 2020 by a group of Navarro students raising money for the Leukemia and Lymphoma Soceity.

Sophomore Berklee Andrews, 16, and her flamboyance of friends — Mary Gilliam, 15, Jaelyn Martinez, 15, Halle Lanham-Scheib, 16, Katie Durrett, 15 and Jacob Frederick, 16 — have flocked the Seguin and New Braunfels area for several weeks raising funds for a good cause.

“Berklee is running for student of the year for the Leukemia and Lymphoma Society, and to do this, you get a team,” Berklee’s mother Dana Andrews said. “So, they decided that their fundraiser was going to be flocking. Flocking is where they put flamingos in people’s yards and they can make a donation or in lieu of a donation if they have somebody in mind because everybody’s somehow affected by cancer, so they’ve been really busy.”

Nightly, Berklee and her team tend to more than half a dozen flocks of the pink plastic flamingos they’ve placed since they began about three weeks ago.

“I wouldn’t have been able to do this without my great friends,” Berklee said. “We have seven flocks going every night or every few nights where we pick them all up and get the next address, and move it along. Every penny counts, and it’s really just been a great experience.”

The seasoned flocking team has hit more than 100 yards. The late-night antics are an adrenaline rush, Berklee said.

“We usually go after dark and try to place as many as we can, and then we have to tape a piece of paper on their door with all of the instructions that explains what it’s all about,” she said. “So we hurry up and do it, but it can be scary if people are right there so we escape really quick so that hopefully in the morning it can be a big surprise. We have been caught a few times and luckily they haven’t gotten mad.”

Berklee decided to run to honor her cousin, who recently fought and won a battle with cancer, she said.

“We are totally blessed that she is cancer free,” Dana said. “And a lot of that is due to the funds she received from LLS (Leukemia and Lymphoma Society). She had a blood cancer and is 100% cured. Not in remission, cured.”

Jaelyn said flocking alongside Berklee has been an enlightening experience.

“I think it’s interesting that we can be so young and know that we are actually making a difference,” Jaelyn said. “Even if we don’t meet our goal, we’re still raising money to help, and anything counts.”

The fundraiser is an entertaining way to bring light to an important cause, Berklee said.

“Usually people are affected by cancer in some way, shape or form, and so people really draw to and tend to spread the news and tell their friends about it,” she said. “Whenever the word spreads, it obviously brings more to the research, and literally every penny counts. So we just thought it would be more eye-opening and more fun for everyone to see.”

“It’s just been really neat watching this group of girls and Jacob come together,” Jim said. “I really think they’re going to raise their $25,000, and it’s an amazing effort.”

If a resident is flocked by Berklee and her team, a flyer is left on their door with a space open for donations to have the flamingos removed and passed along. There is also a space to opt-out of a donation.

“We have rarely not had a donation made,” Dana said. “And that’s fine because part of it is, if you can’t donate then send it somewhere. We know that not everybody is able to donate, but everybody’s enjoyed having them. Every dollar counts and no donation is too small.”

A social media hashtag has also been created to highlight those who have participated and can be found at #MeetTheFlockers2020.