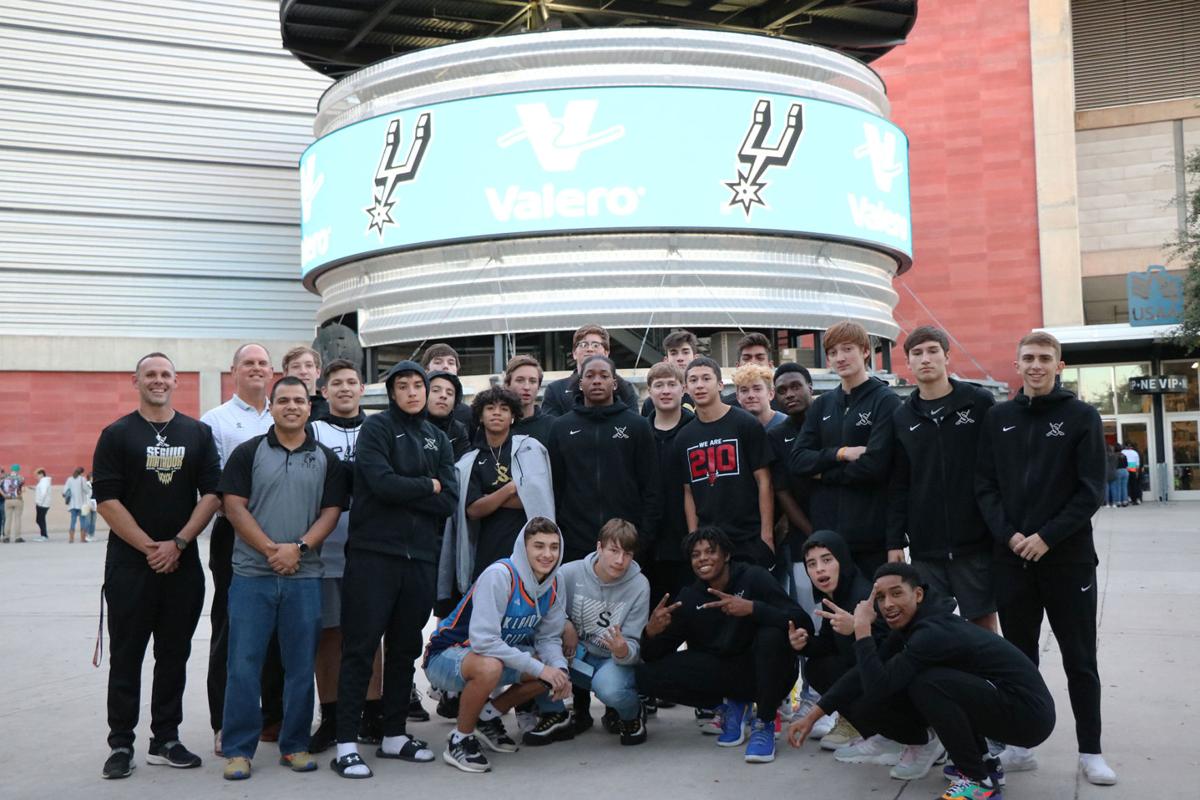 The Seguin High School basketball team stop for a photo outside the AT&T Center prior to attending the Spurs game on Tuesday, Dec. 3, 2019. 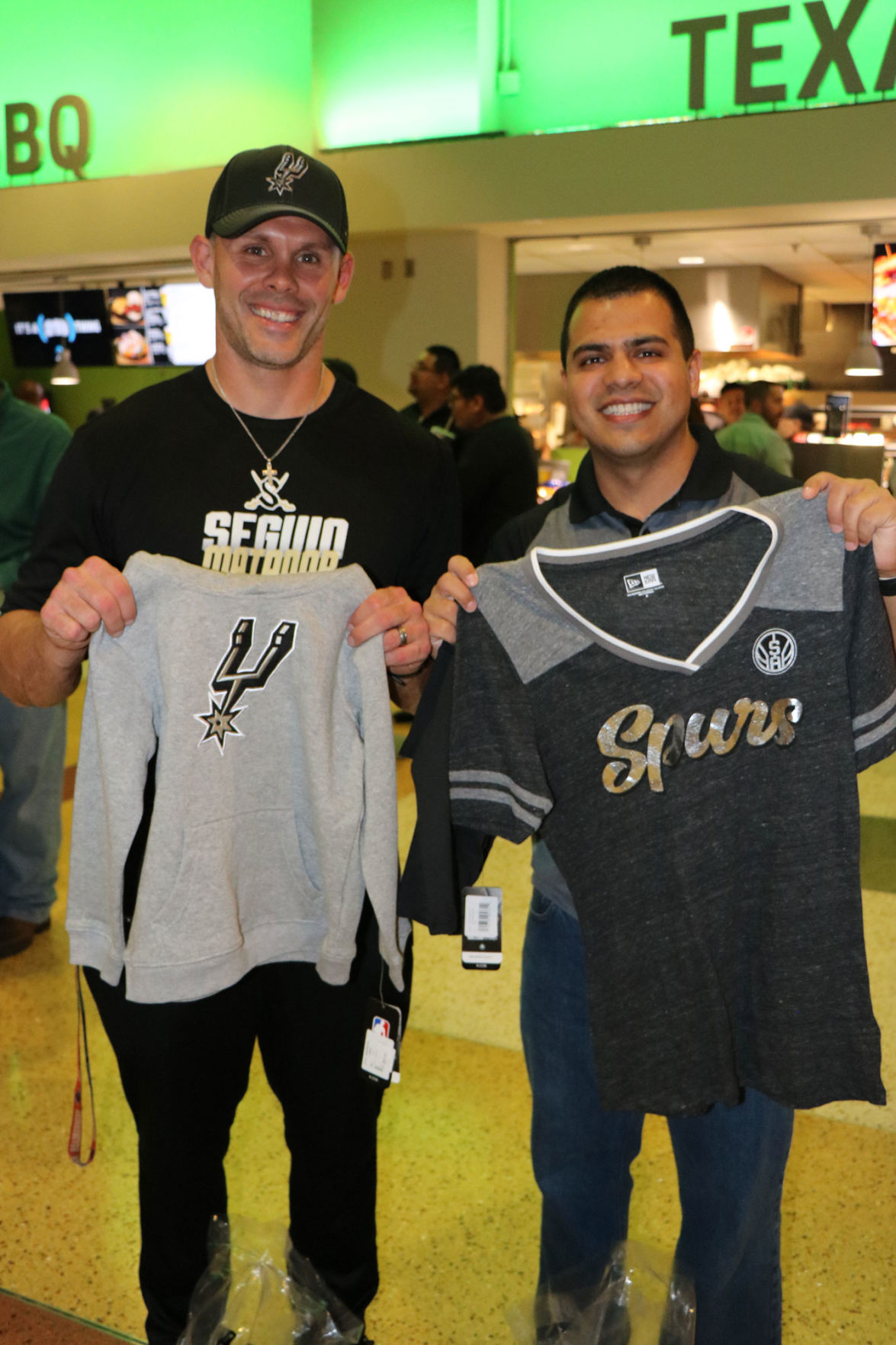 Seguin assistant coaches Guy Nowlin (left) and Joseph Saldana show off their purchases of Spurs' gear while attending the Spurs vs. Rockets game on Tuesday, Dec. 3, 2019.

The Seguin High School basketball team stop for a photo outside the AT&T Center prior to attending the Spurs game on Tuesday, Dec. 3, 2019.

Seguin assistant coaches Guy Nowlin (left) and Joseph Saldana show off their purchases of Spurs' gear while attending the Spurs vs. Rockets game on Tuesday, Dec. 3, 2019.

After the Mats had played and beat La Vernia in an early afternoon game at the At&T Center in San Antonio, the team got the VIP treatment from the organization and came back to the arena for the Spurs, Rockets game that night.

I hung out with the coaches for the game, while the kids were all over the arena, grabbing seats in the Fan Zone and watching what turned out to be a double-overtime thriller of a game.

The Spurs would win the game, and all of us had a fantastic time watching some great NBA basketball just 30 minutes away from Seguin.

Part of the experience for the kids was a front row seat on the floor for the warmups of both squads.

We were all amazed at the skill level of the players — and their size. These guys are large human beings, even the guards are 6-foot-2 to bigger, and San Antonio’s two centers, Jakob Poltl and LaMarcus Aldridge are giants at 7-foot-1 and 6-foot-11, respectively.

You don’t really notice it so much when you watch the games on TV, because they’re all so big — but when you are right there at floor level — they are huge.

As the Spurs were warming up with shooting drills, we noticed that they rarely missed from three-point range. Brent Forbes and Marco Belinelli were shooting from outside the arc, about 25 feet away from the rim, and at one point Belinelli made nine in a row before a miss, then made eight in a row after the miss.

The kids were counting them down and gasped with the ease of the makes from two of the Spurs premier shooters.

The seats down on the floor for the warmups were part of the VIP package the team enjoyed since they had played at the arena earlier in the day.

“The kids got to sit down there for an hour,” Seguin head coach Dwayne Gerlich said. “They got to watch the guys warm up and shoot, it was a great experience for them. They thought it was awesome — they didn’t realize how big the NBA players are.

“Even I was kind of amazed watching them shoot three’s down there. They would miss one, then make five or six in a row. I never saw them miss two in a row.”

The rotation on Belinelli’s shots was a thing of beauty, the ball spinning perfectly as it left his hands.

“It was perfect,’ Mats’ assistant coach Guy Nowlin said. “That’s years and years of reps shooting the ball — they were perfecting their craft out there.

“They were doing some form shooting, and that’s something we do with our boys. So it was good for our guys to be able to see them, even in the pros, stick to the basics and fundamentals. Hopefully they were able to take something from that.”

Nowlin and fellow assistant Joseph Saldana went shopping on the concourse after the warmups, grabbing a little Spurs gear for the family prior to the start of the game.

While the Matador players headed to the Fan Zone to grab the open seating area early, Nowlin, Saldano and I headed up to seats in the upper level of the arena to watch the game.

As the three of us watched the first half of the game, the two Seguin assistants could not help themselves.

Once a coach — always a coach.

The play on the floor drew constant comments from the pair, as they coached the Spurs from the upper deck at the top of the arena.

“The backside didn’t roll over to help out,” Nowlin said after one Rockets’ bucket. “I don’t know why the defense has been such a problem this year, we’ve always been great defensive team, but not now.”

After the Rockets’ James Harden drew a foul on one of his drives to the bucket, Spurs head coach Gregg Popovich came off the bench, angrily arguing the call with the officials.

Coach Nowlin agreed with Popovich. “That call was terrible,” he said.

Harden is an enigma — the Rockets’ leading scorer looks a little overweight and not in particularly good shape — but he scored at will throughout the first half, and had 16 points before we knew what had happened.

He’s as smooth as silk on the floor, his first step so quick that there wasn’t a player on the Spurs that could keep the guy in front of them.

The Spurs would go down by 22 in the second half, and we all thought the game was over. But an incredible comeback, including a career high and a game-tying three from backup Lonnie Walker, propelled the Spurs to an amazing double-overtime win.

A great game that concluded a cool day for the Matadors’ coaches and players alike at the AT&T Center.