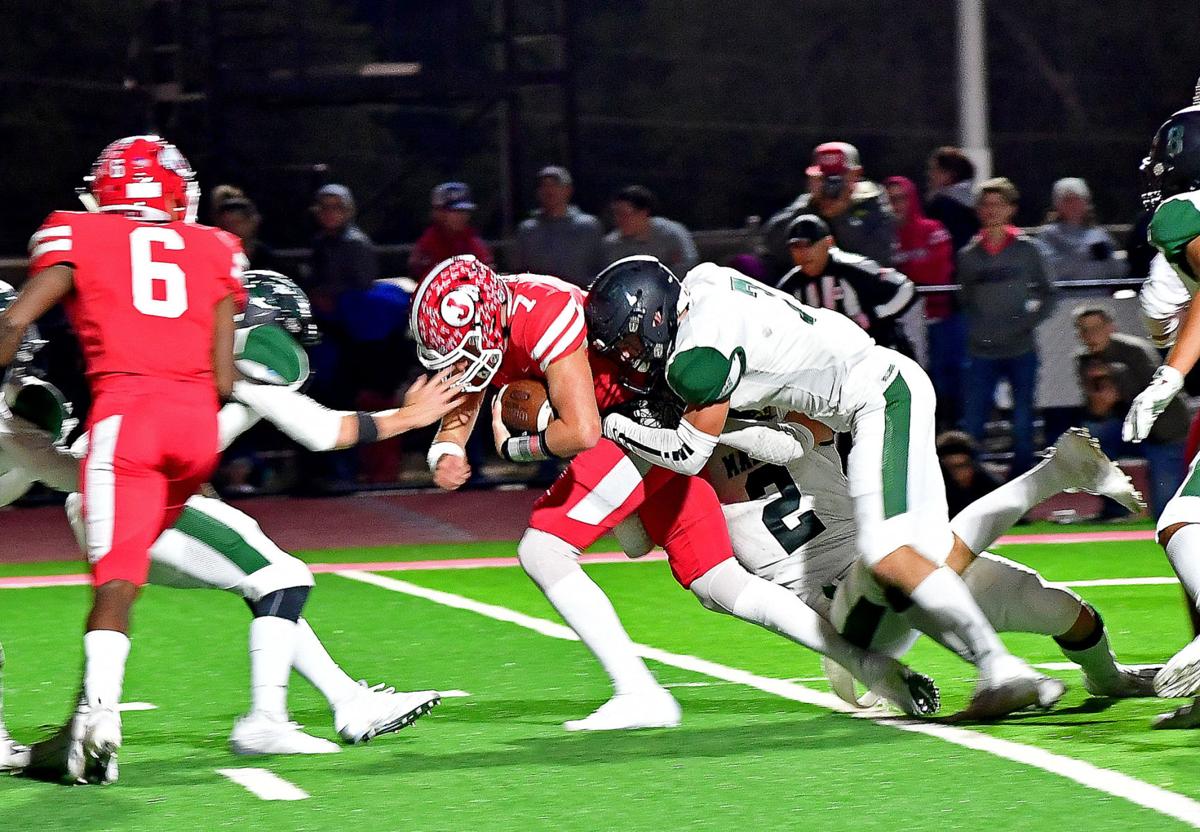 Marion’s Cade Baumann (7) was one of five area players that pariticiapted in the HEB All-Star game in San Anonio on Jan. 4, 2019. Baumann had a sack and a forced fumble in the game. 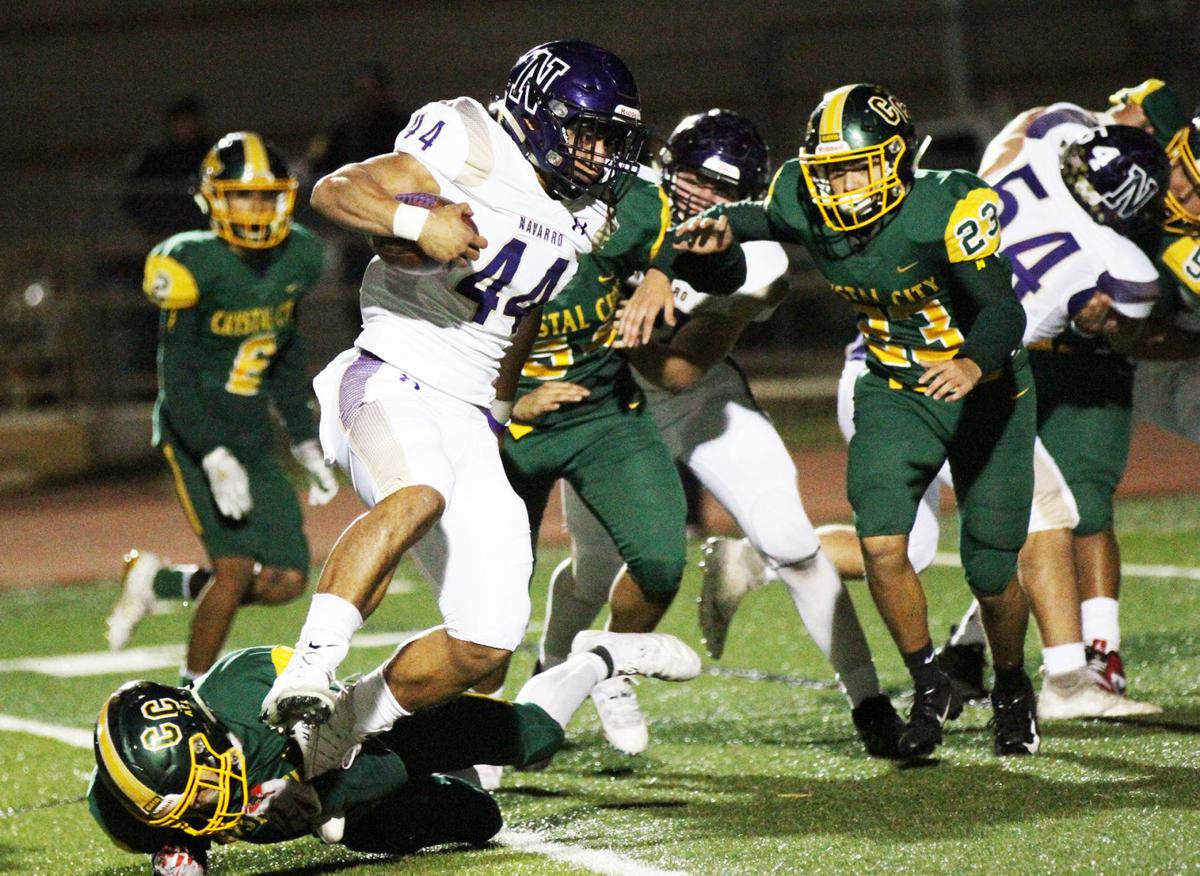 Navarro’s Euler Deleon (44) was on the winning side as a running back for the Black team at the HEB All-Star game at the Alamodome. His squad won the game in a thriller, 35-34. 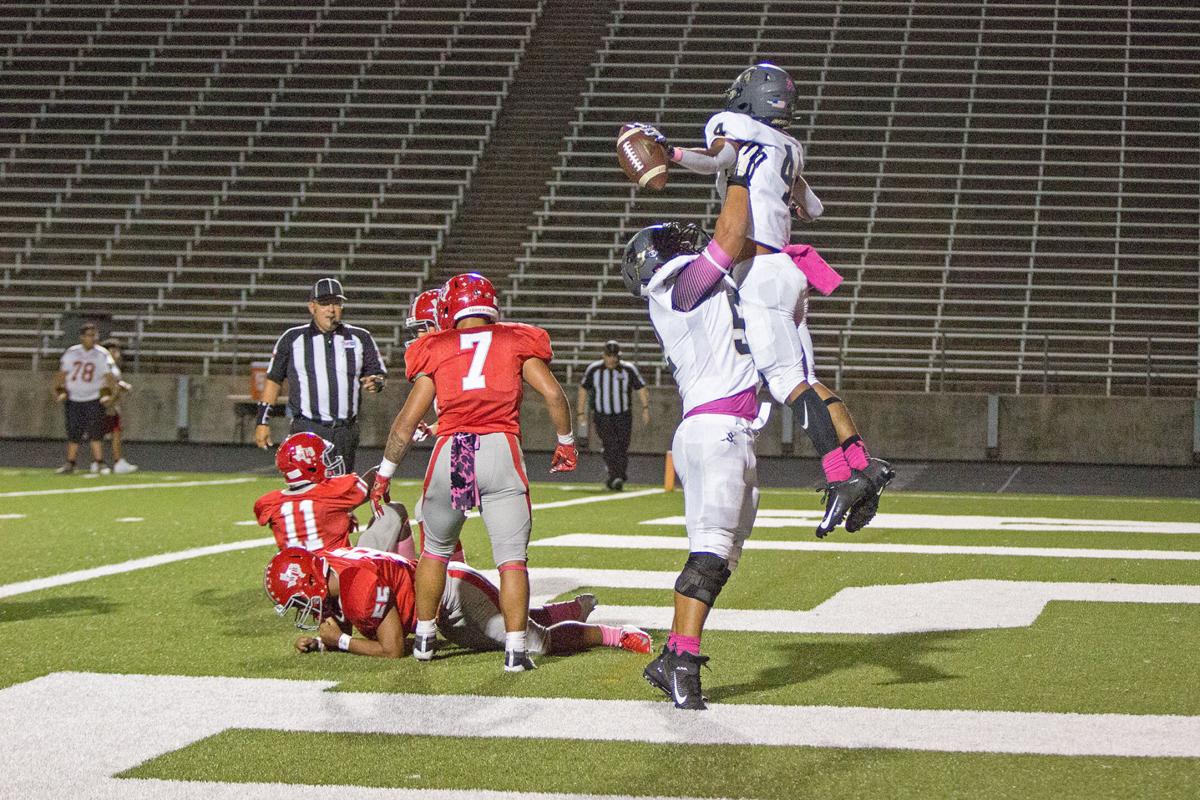 Seguin lineman Josh Avalos (50) lifts Marques Washington into the air in celebration after a touchdown last fall. Avalos played in the HEB All-Star game last weekend at the Alamodome.

Marion’s Cade Baumann (7) was one of five area players that pariticiapted in the HEB All-Star game in San Anonio on Jan. 4, 2019. Baumann had a sack and a forced fumble in the game.

Navarro’s Euler Deleon (44) was on the winning side as a running back for the Black team at the HEB All-Star game at the Alamodome. His squad won the game in a thriller, 35-34.

Seguin lineman Josh Avalos (50) lifts Marques Washington into the air in celebration after a touchdown last fall. Avalos played in the HEB All-Star game last weekend at the Alamodome.

For most of them, it was the last football game they will ever play.

Five area players represented their schools at the HEB San Antonio All-Star Football Game on January 4 at the Alamodome.

Navarro’s Euler Deleon and Gabriel Means, Seguin’s Josh Avalos and Dillion Gutierrez and Marion’s Cade Baumann were chosen to play in the game featuring the best of the best high school seniors in the San Antonio area.

The Gazette caught up with three of those players;  Avalos, Baumann and Deleon.

The game was bittersweet for Avalos and Baumann, as both said it was likely the last time they would wear the helmet and shoulder pads and take to the field.

Deleon, the Gazette’s Player of the Year, rushed for more than 2,000 yards his senior year for the Panthers, and may continue his playing career. But as with the other two, football is now becoming an option, rather than the focus of his life after high school.

The Seguin senior went to the game as an offensive tackle, but volunteered to move to center, a position he had not played since he was a sophomore.

He did so for a very simple reason — the tackles were huge.

“I’m normally used to be being one of the bigger guys on the team,” Avalos said. “But I got there and was looking up at the rest of the offensive line. I was playing with a whole bunch of guys that fit the position.”

Avalos had run into that throughout the regular season with the Mats, including playing against a likely DI recruit, Devin Grant, when Seguin played Antonian early in the year.

He went to the game to play football for one of the last times, as he does not have plans to play in college.

“I’m not trying to further my football career,” Avalos said. “I wasn’t getting looked at very much, and also, if I was to do that it would take away from my real plans — as of right now I’m going to A&M to be an engineer.”

His move to center allowed him to see more playing time than he had anticipated.

“I played way more than I expected,” Avalos said. “The two tackles we had were just big and good at what they did. I asked if I could move to center because I felt like at that position I could get the starting spot, which I did.”

Because the game was close, the Black team eventually came to win 35-34, those on the second string didn’t get as many opportunities to play.

“We were fighting the whole game to come back or take the lead,” Avalos said.

He felt like he played ok, for not having played the center position for two years.

“With only being able to practice a week before the game, I would call a slide protection to one side and a guy wouldn’t get it,” Avalos said. “Up on the Jumbotron all you could see is some guy breaking through the line free.”

Avalos played in one more All-Star game last weekend in San Antonio, and said it was likely the last game he would ever play.

The Marion outside linebacker enjoyed playing with all the players from other schools on the Gold team.

“It was a great experience to play with people from other schools, meet a ton of other people and create bonds and friendships that you normally wouldn’t create,” Baumann said.

He played for about “three-quarters of the game,” he said. “The other guy rotating at my position got a little banged up.”

Baumann had a sack, five or six tackles and a forced fumble in the game.

“I think it went really well,” he said. “I wanted to represent my school, it’s a great thing to do. We’ve had people in the game the last five or six years, so I wanted to keep that tradition going.”

Like Avalos, Baumann noted the quality and size of the players from around San Antonio, but said his position kept him from some of the bigger linemen on the field.

“It was pretty stacked,” he said. “There were some dudes in that game. But I played outside linebacker, so I didn’t have to mess with them that much.”

It was Baumann’s last game to play, as he is already accepted at A&M and plans to attend school there.

“It’s pretty much the end of the road for me,” Baumann said. “I’m going to miss football but everything has a time. There’s going to be intramural sports in college.”

He’s played football every fall for the last eight years, so he will miss the game that’s been such a big part of his life.

“I’m definitely going to miss it,” he said. “There’s something about football that other sports don’t have — the physicality and the bonds of a football team that are a lot closer than other sports.”

Baumann will try to fill the void by going to as many A&M games as he can while there.

The Navarro running back played for the Black team, and while he played quite a bit, the team’s offense revolved around the passing game, the exact opposite of the offense he was in at Navarro.

Deleon spent much of his time on the field pass blocking and got just three carries in the game, but played pretty much every other series for the Black squad.

“They had me blocking a bit more and it was fine,” Deleon said. “I got a couple of good blocks out there. Yes, the guys were bigger, but you don’t really look at their size, you just look at them.”

Unlike Avalos and Baumann, Deleon has had some schools interested, including Texas Tech, but football is secondary to his career path.

“I have a couple of offers from schools in Oklahoma, and Texas Tech was looking at me, but they don’t really have the program I was looking for — I want to major in biochemistry,” Deleon said. “I was looking at schools that have a good medical program.”

The football will become a means to an end for Deleon.

“It would be nice if they would pay for it,” he said. “But if I can’t find a school with the right program, then I’ll probably just go to UT and I might walk on there — just to see.”

He thought about the possibility of the All-Star game being his last game, but is taking a wait-and-see approach.

“I looked at it like it could definitely be my last football game,” Deleon said. “But I’m just waiting to see what the future holds really.”

The Black team getting the win was special for the running back, as his Panthers got beat by Wimberley in the Alamodome just a couple of weeks before in the playoffs.