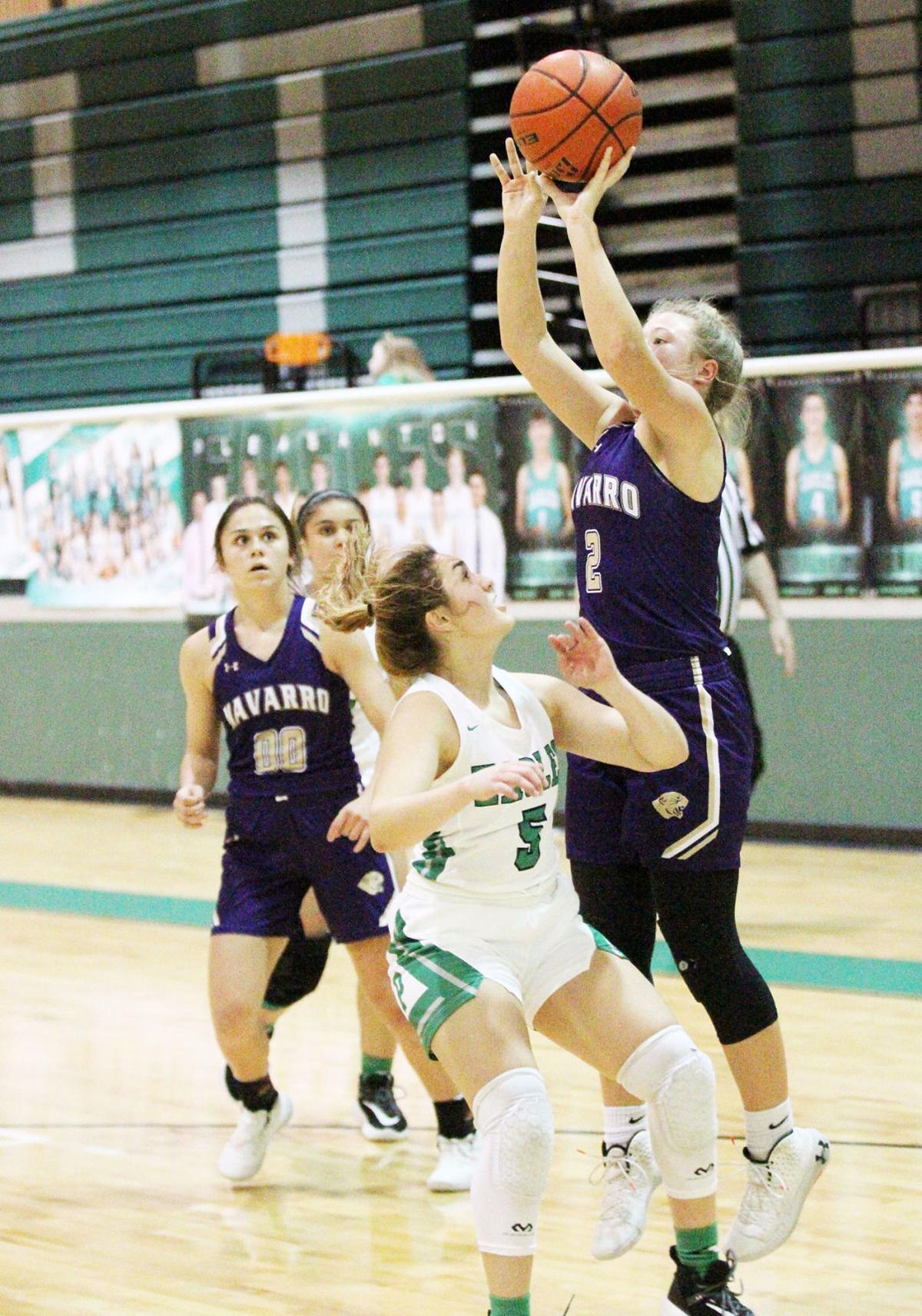 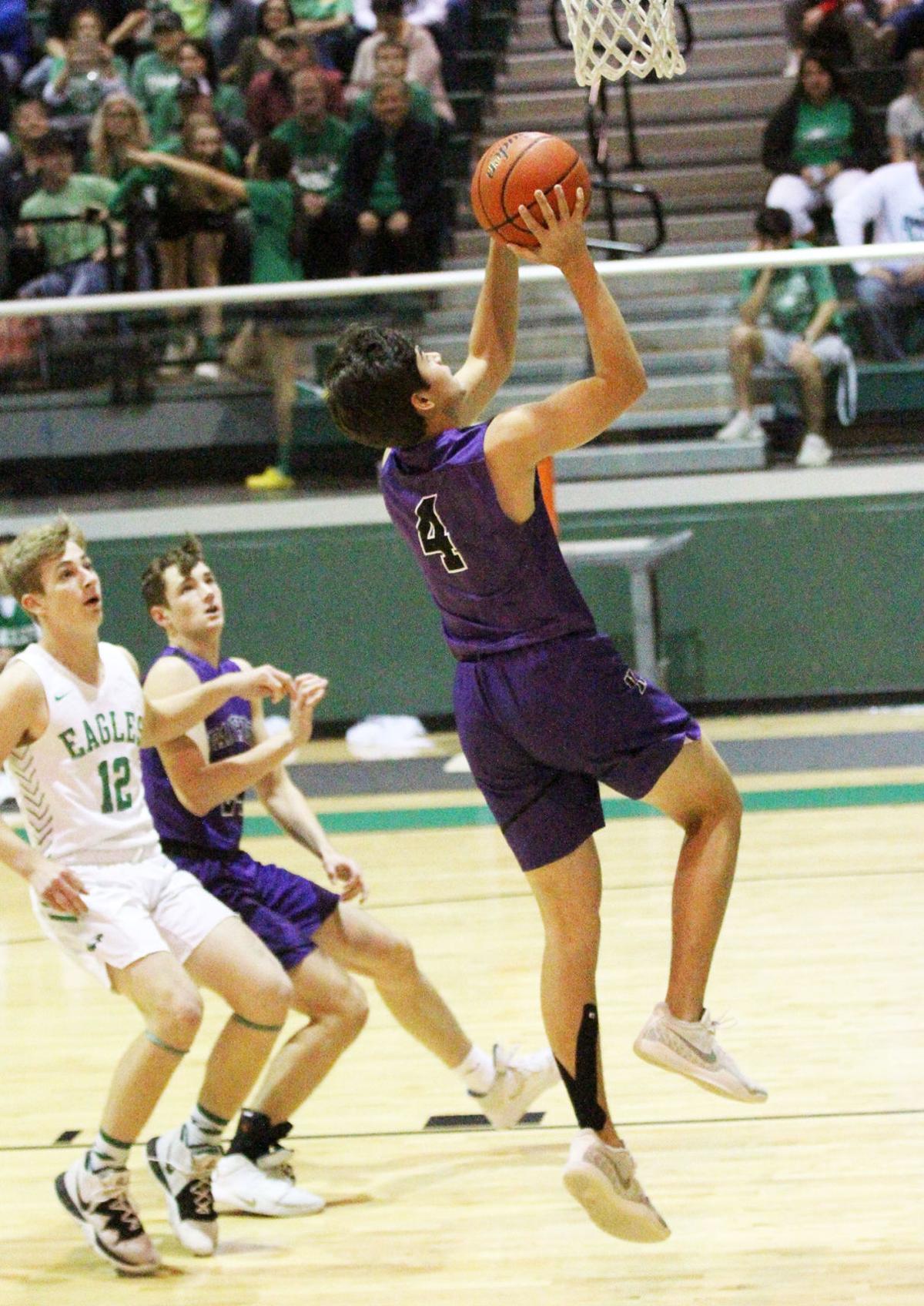 Navarro's Cooper Guetzke takes the ball in for a layup in the Panthers' loss to Pleasanton on Friday night, Jan. 24, 2020. 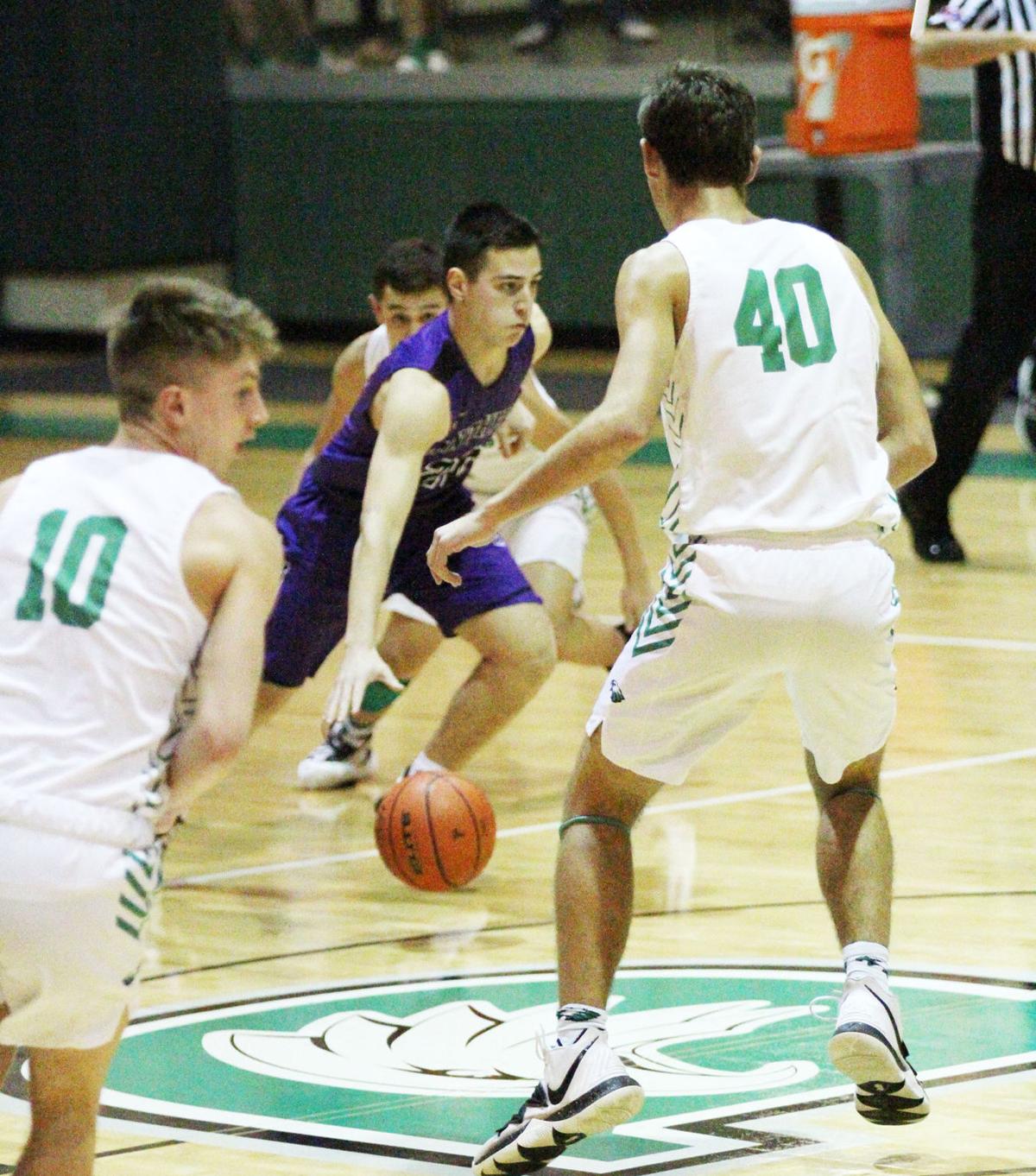 Navarro's Reese Rojas dribbles through defenders in the Panthers' loss to Pleasanton on Friday night, Jan. 24, 2020.

Navarro's Cooper Guetzke takes the ball in for a layup in the Panthers' loss to Pleasanton on Friday night, Jan. 24, 2020.

Navarro's Reese Rojas dribbles through defenders in the Panthers' loss to Pleasanton on Friday night, Jan. 24, 2020.

PLEASANTON — The Navarro Lady Panthers got a big win at Pleasanton Friday night, riding a hot second quarter to get a seven-point lead, then holding on for a 46-41 win.

Navarro outscored the Eagles 18-5 in a decisive second quarter that saw the Lady Panthers get three straight threes, one each from Tatum Harborth, Sara Benner and Berklee Andrews, to build the seven-point lead at the half (25-18).

“It was a big spot in the game,” head coach Darrell Harborth said. “When we had our big run we had back-to-back-to-back three pointers to increase the lead.

“On the road in this district, it’s not always easy, so it’s good to get a win, especially against a team like Pleasanton. Even though they’re in fifth place, they have been winning late in the fourth quarter against district opponents. So it’s good to get out of there with a win.”

Coach Harborth slowed things down in the second half with the Lady Panthers holding on to the lead.

“In the fourth quarter on the road, we slowed it down a bit in the last three or four minutes,” he said. “We went with a little bit of a spread offense, making them have to foul us. We made our free throws, and held on to win.”

“They made a little run and hit a few shots late, but that was probably as close as they got, was five points at the end.”

The Lady Panthers finished the night 15-20 from the free throw line, including 5-5 from Tatum Harborth, who led all scorers with 20 points. Laylin Sturm and Benner had seven points each and Micayla Hawes had five for the Lady Panthers.

The Lady Panthers trail Gonzales (7-0, 17-7 overall) by a half game after the Apaches beat 5-3 La Vernia, 47-43, on Friday night. Gonzales is the only team to beat Navarro in district this season.

“They’ve been living like that all district long,” Harborth said. “Maybe it’s because they’ve got a lot of senior leadership, but they’ve been winning a ton of close ones.

“We’ve got them next Friday at their place, so we just need to take care of business against Brooks on Tuesday night.”

Pleasanton outscored the Panthers 22-7 in the first quarter to take an early lead, then cemented the game with a 33-12 third period to move to 24-3 overall and 6-0 in District 30-4A.

The Seguin girls fell to Boerne Champion at Goldie Harris Gym, 53-30. The loss dropped the Lady Mats to 2-10 in district and 12-19 overall, eliminating them from playoff contention.

The Marion boys kept it close for a half against the No. 3 ranked team in 3A in the state, SA Cole, but eventually fell, 62-48.

The Bulldogs trailed by just two at the half, 26-24, before Cole outscored them 20-9 in the third to build a cushion.

The Lifegate Falcons got a road win at Smoking for Jesus, 57-35. Quinten Shellnut had 25 and Zach McCulloch, 17, as the Falcons moved to 5-6 on the season.