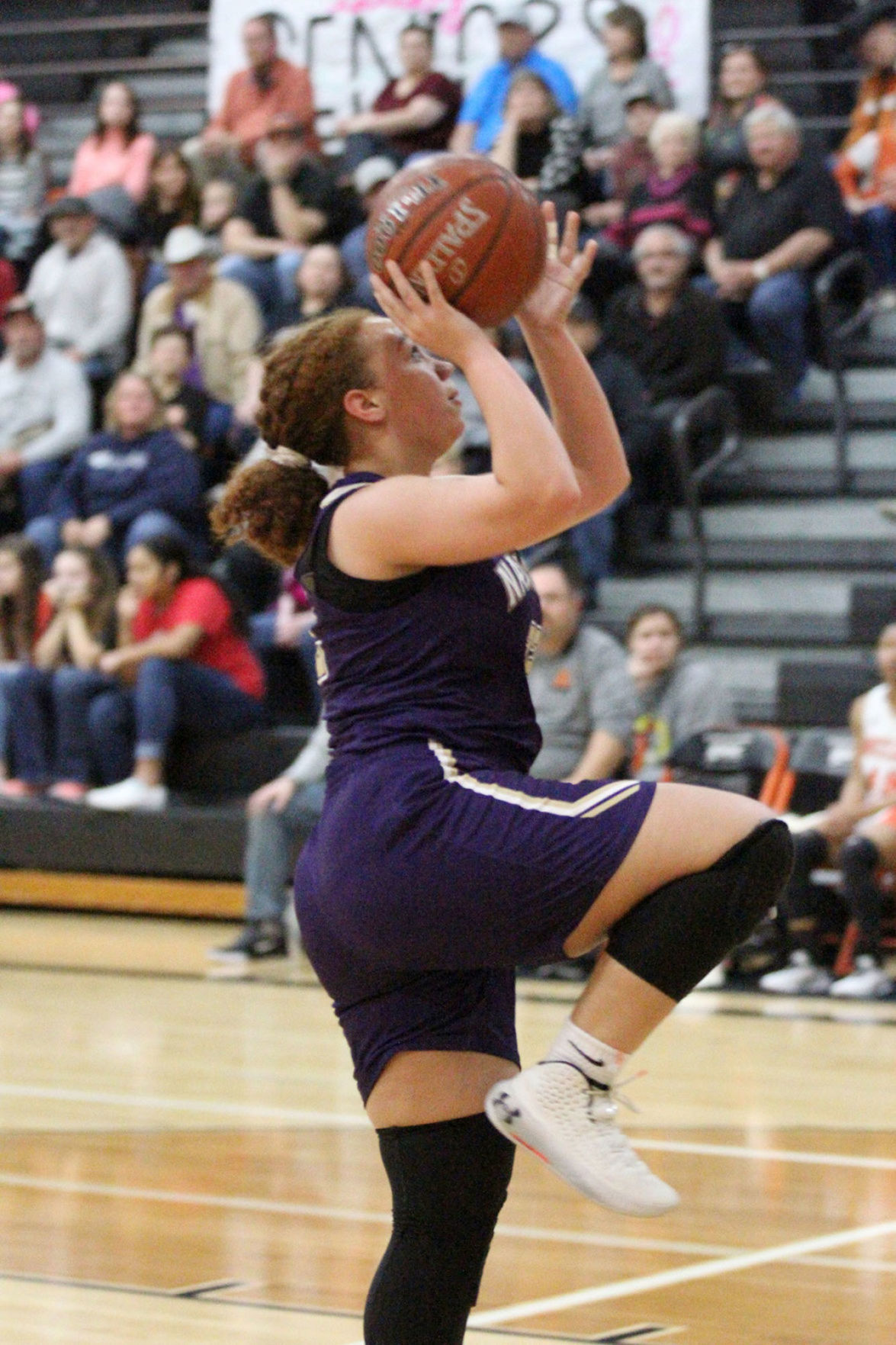 Navarro's Micayla Hawes takes it to the rim duirng a Lady Panthers' game this season. She signed last Wednesday to play basketball at UT-Dallas. 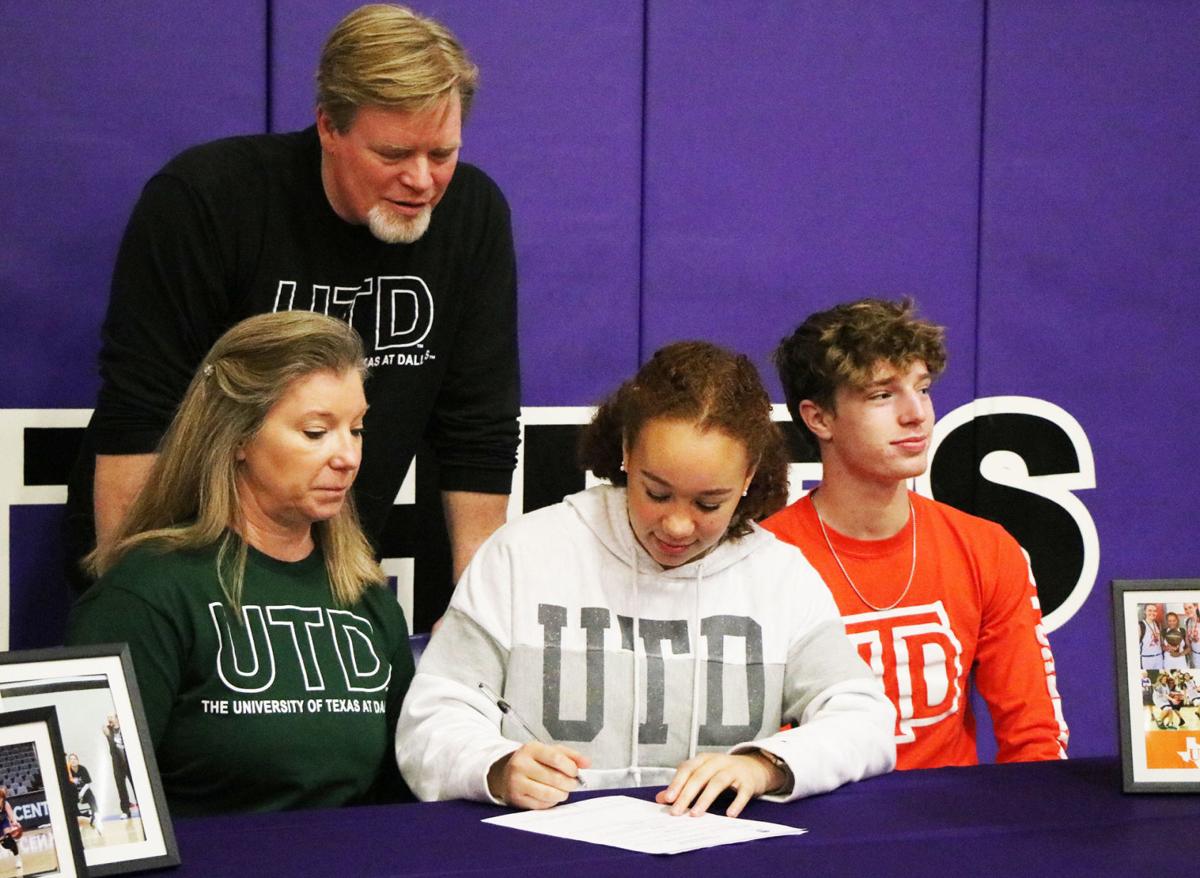 Navarro's Micayla Hawes, with her family around her, signs a letter of intent to play basketball at the University of Texas at Dallas on Wed., Feb.. 5, 2020 at the Navarro Events Center.

Navarro's Micayla Hawes takes it to the rim duirng a Lady Panthers' game this season. She signed last Wednesday to play basketball at UT-Dallas.

Navarro's Micayla Hawes, with her family around her, signs a letter of intent to play basketball at the University of Texas at Dallas on Wed., Feb.. 5, 2020 at the Navarro Events Center.

A mix up with her dad on directions in the Metroplex may have been fate for Navarro’s Micayla Hawes.

Hawes, a senior on this season’s district championship Lady Panthers’ basketball team, signed her letter of intent to play basketball at UT-Dallas last Wednesday at the Navarro Events Center.

And it all got started when she sent her dad to the wrong school.

Hawes and her father were on visit to the Dallas-Ft. Worth area, looking at a potential school for her to attend in college — but it wasn’t to tour UT-Dallas.

‘I was actually going up to Dallas to visit a different school and I accidentally sent my dad to the wrong address, ” Hawes said. “We ended up on the campus at UT-Dallas.

“I fell in love with the campus and thought that I should get ahold of the coach.”

She contacted the coach at the school and “it all went from there. I ended up at the wrong campus and it was literally like God’s will — that’s all I can say.”

She went to a recruitment camp last summer at the school and has kept in contact with the coaches since.

“They like my determination and my defense,” Hawes said. “My defense is definitely my best skill set and I hope to practice and get better on my offense.”

Hawes was a little surprised to already be a senior and preparing to head off to college.

“High school just seemed to fly by,” she said. “One time it’s like the first day of high school  and all the sudden you look back and it’s senior year.”

She’s appreciated the last few years with Navarro head coach Darrell Harborth — even though he’s sometimes excitable on the court.

“We have a really good relationship — even with his … um … yelling,” Hawes said. “I still love him, we give him a hard time about his bald head.

“It’s been really fun to play for him, especially this year with the good attitudes on the team.”

Hawes plays some at guard and some at post for the Lady Panthers.

“I’ve played literally everything,” she said. “I’ve gone from guarding a 6-foot girl to guarding somebody my height, but it’s really helped me to transition, to have post moves and guard moves. Whatever coach needs me to do, I just step in and do it.”

The Lady Panthers have clinched the District 30-4A crown and are waiting to find out this week who they will face in the first round of the playoffs.

Harborth returned the sentiment to his senior, noting her work ethic and effort on the court.

“She’s the type of kid that every coach loves to coach,” Harborth said. “She’s going to go out there and execute the game plan, do the things you want her to do, work hard at practice and play hard on the court.

“She exemplifies that and that’s why she’s going to the next level.”

While the university may not have signed her for her scoring, her other attributes on the court are substantial, Harborth said.

“She’s not the biggest scorer sometimes, but she’s a great defensive player, rebounder and competitor on the court,” he said. “She makes her teammates better because of her attitude and how excited she is on being on the floor.”

Part of Hawes’ decision to attend UT-Dallas was for the academics — as she has big plans for a future career in the law.

“I want to major in business marketing and that could lead somewhere,” she said. “But I’m looking to go on the track to study for my LSAT and get into a law school, maybe UT.”