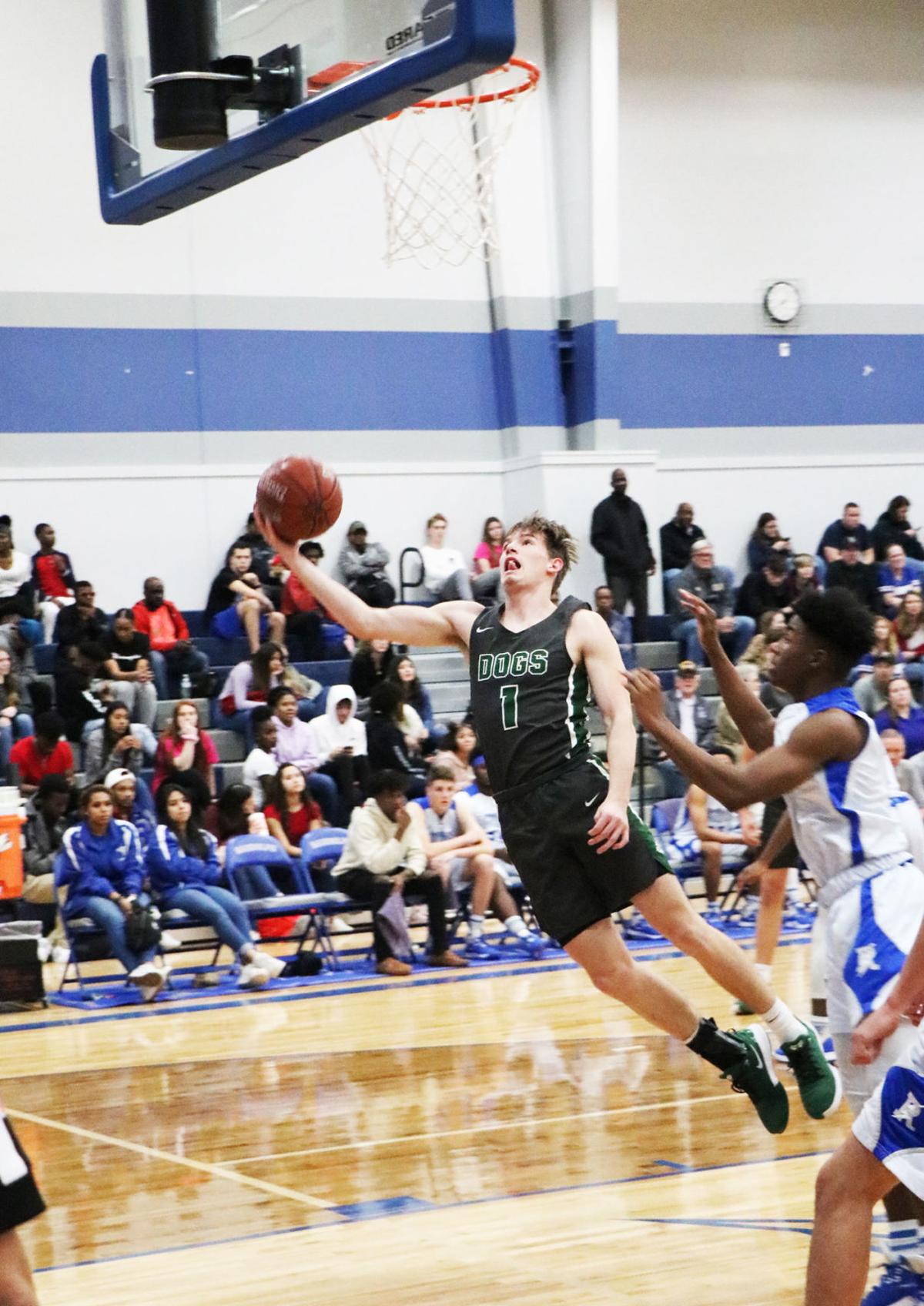 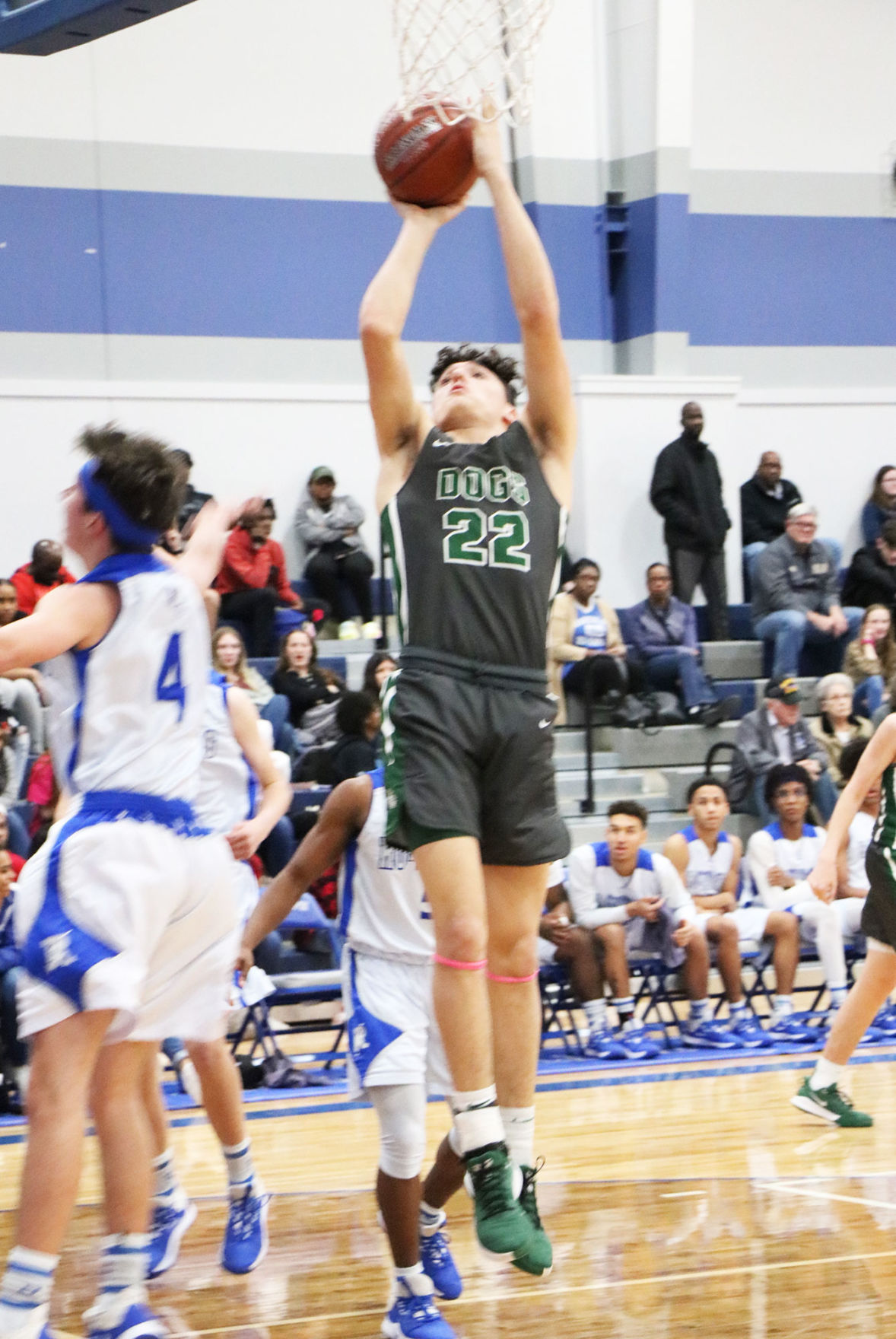 The Bulldogs' Jayden Williams gets a bucket from close range in Friday's loss to SA Randolph.

The Bulldogs' Jayden Williams gets a bucket from close range in Friday's loss to SA Randolph.

To say that the top of District 26-3A is stacked would be a vast understatement.

The Marion Bulldogs basketball team is still on track to make the playoffs, but took it’s second loss in a row on Friday night — falling to the No. 6 ranked 3A team in Texas, the Randolph Ro-Hawks, 66-37, in Universal City.

This was after the Bulldogs (3-6, 14-16) faced No. 3 SA Cole on Tuesday night, giving them back-to-back games against two of the top 3A teams in the state.

“There’s not that much to say, they’ve got better athletes than we’ve got,” head coach Jon Allen said after the game. “They’ve got some studs, but as bad as we’ve looked the last two games, if we win on Tuesday we’re in the playoffs.

“That’s where you want to be at the end of the year. We beat Gervin  the first time and I think we’ve got a good chance to beat them at home.”

The Bulldogs leading scorer, Ryken Autry, was shut down by a fronting Ro-Hawk defense that denied him the ball, and was held scoreless on the night.

‘I don’t think anybody else has shut him down like they did tonight,” Allen said. “They were denying him the ball, not letting him get it and it frustrated him a little bit, but anybody is going to be frustrated when they are doing that to you.

“We’ll have some stuff ready for that for the playoffs — they’ll probably be some people doing that to us so we’ll have some things drawn up to negate that.”

The Bulldogs hung tough for about half the first quarter, trailing by just one, 11-10. Kadeem Byden got a couple of buckets on good cuts to the basket, while Zach Goodwin, Jayden Williams and Samuel Montoya each scored to keep the Bulldogs close.

But the Ro-Hawks went on a 17-0 run over the next seven minutes of the contest, creating easy baskets on the fast break off of turnovers to build an 18-point cushion, 28-10.

Marion played Randolph even over the last three minutes of the half to cut the lead to 14 at 38-24, but that was as close as they would get the rest of the night.

The two back-to-back games against Cole and Randolph, who the coach said he wouldn’t be surprised if they met in the regional final for the right to go to state, may be the toughest competition the Bulldogs will see until a potential rematch with Cole in the third round of the playoffs.

“If we take care of business on Tuesday, we’ve got a great chance to meet up with Cole in the third round,” Allen said. “The other districts don’t have these two teams in them — I would be shocked if I don’t see them in the regional final.

“There are at least two Division I prospects on these two teams, if not three. You don’t see that very often, especially in the same district.”

Montoya and Goodwin led the Bulldogs with nine points each, while Allen contributed with eight, including two three-pointers in the second half.

A win over Gervin on Tuesday night advances Marion as the fourth seed out of district, with a date the following Monday or Tuesday against either Blanco or Jarrell, which were tied for first after Friday’s games.

The Matadors struggled with their shooting in Kerrville, making just two three-pointers the entire night and struggling from the free throw line, (9-19).

Chris James led the Mats with 16, 14 coming in the second half, while Gerrit Twitero had 10, Joseph Vela had five and R.J. Acuna added four points.

The Navarro Panthers (6-5, 15-15) clinched a playoff berth with a 59-36 win on the road at Poteet. The Panthers are tied with Gonzales for third in District 30-4A with one game left, a rematch with top seed Pleasanton Tuesday night in Navarro.

Cooper Guetzke had 14, while Ian Osborne and Grant Chase had 10 points each.

The Navarro Lady Panthers (11-1, 25-10), currently No. 21 in the 4A state rankings, will face Pearsall on Monday night in the Bi-district round in Pleasanton for a 7 p.m. tipoff.

The Marion girls face No. 18 Jarrell in the 3A Bi-district round at Johnson High School in Buda on Tuesday for an 8 p.m. tipoff.