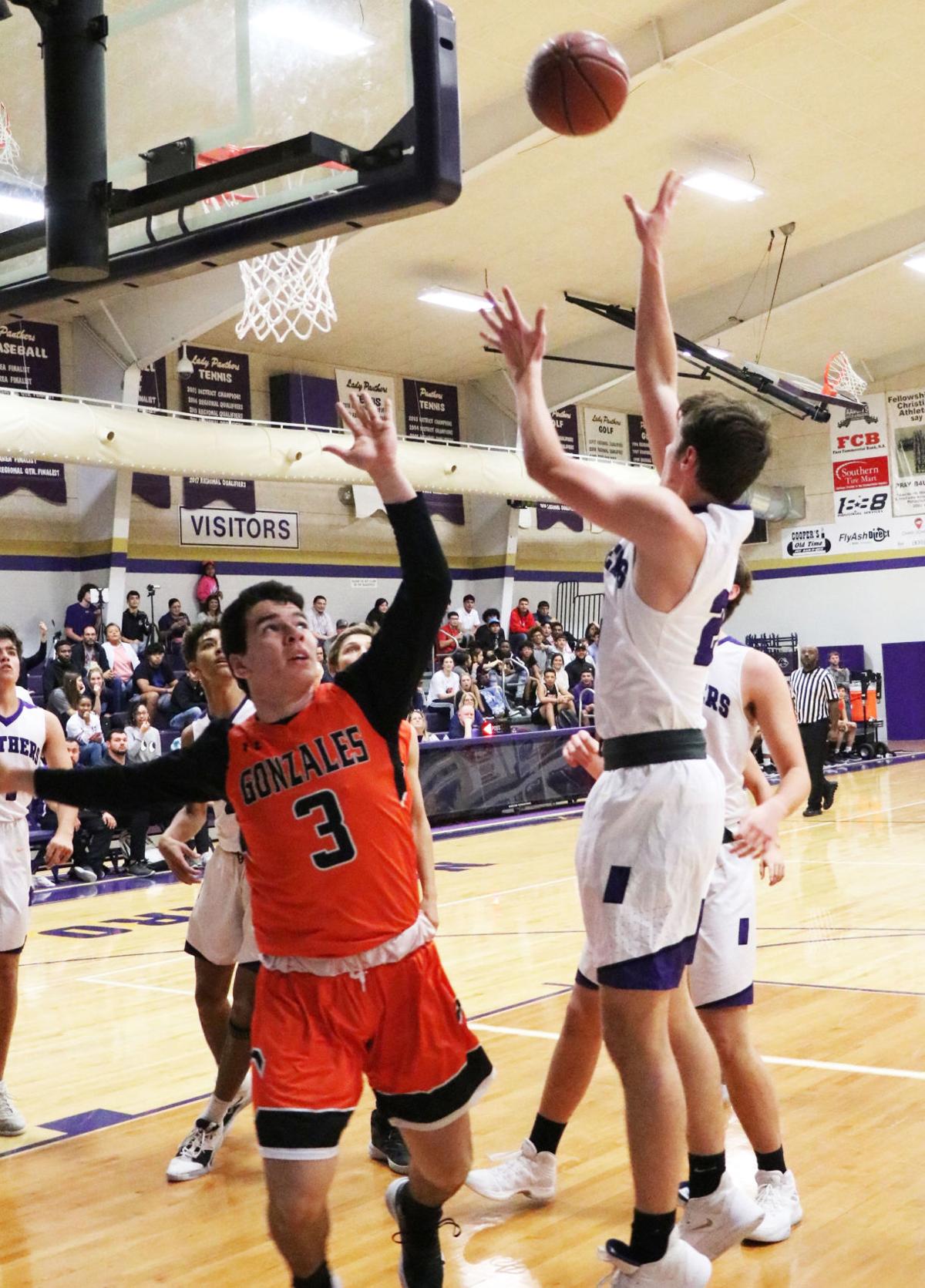 Navarro's Ian Osborne makes a short jumper in the Panthers's 56-51 win over Gonzales Tuesday night, Jan. 7, 2019. The win moved the Panthers to 2-0 in district play. 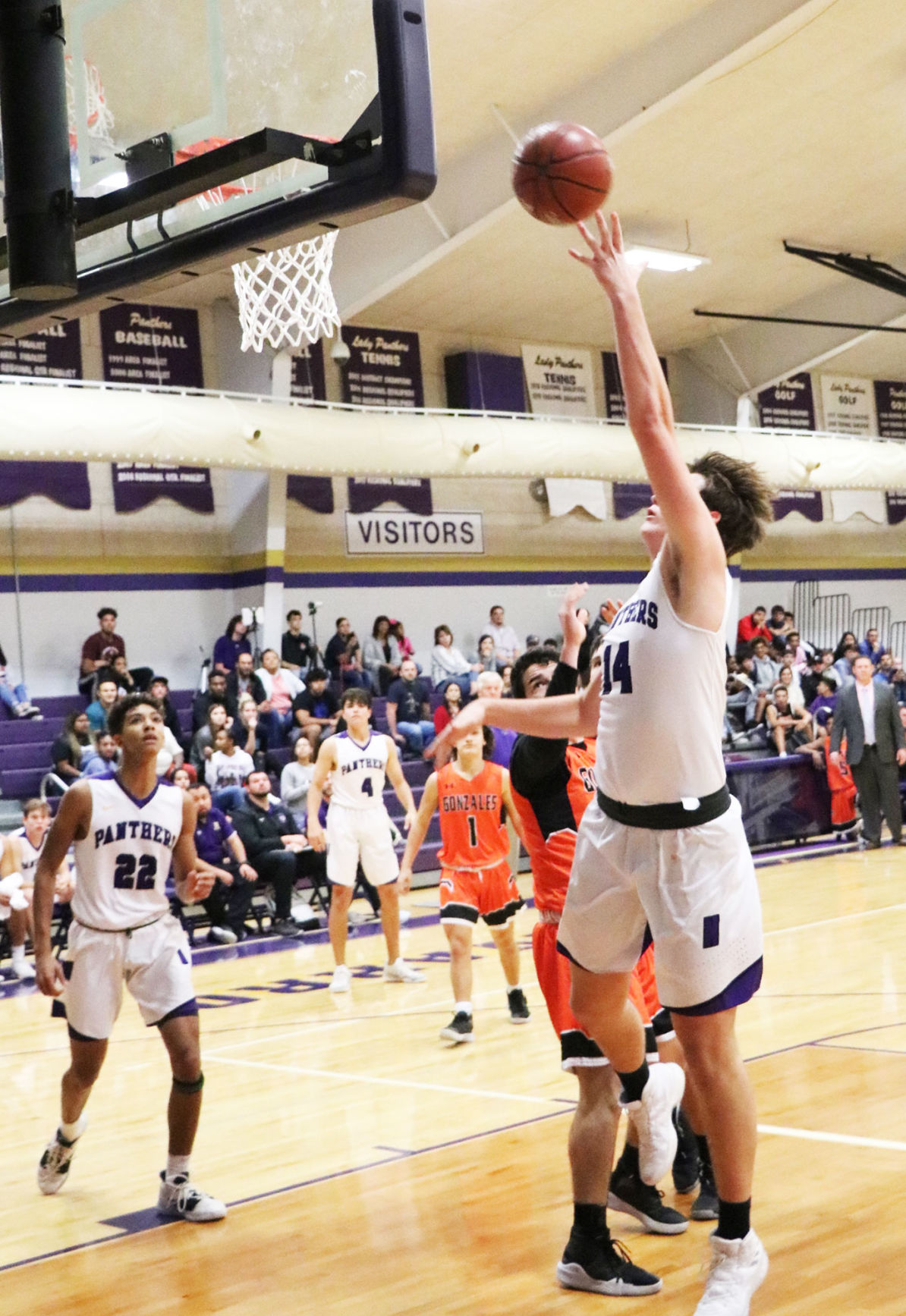 The Panthers' Keegan Pugh lays one in for Navarro in their win over Gonzales on Tuesday, Jan. 7, 2019. 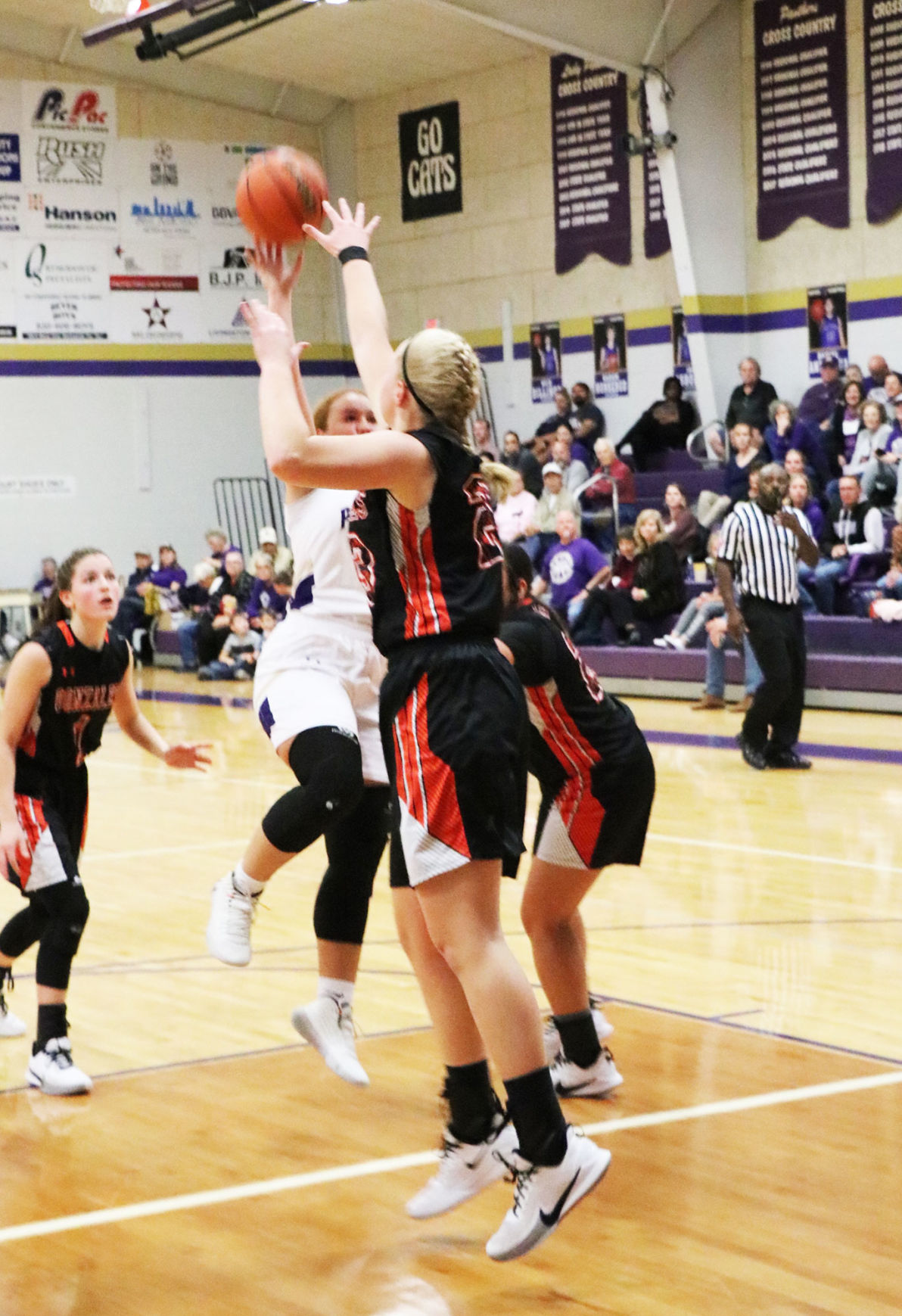 Navarro's Micayla Hawes tries to score on the inside in the Lady Panthers' loss to Gonzales on Tuesday, Jan. 7, 2020. 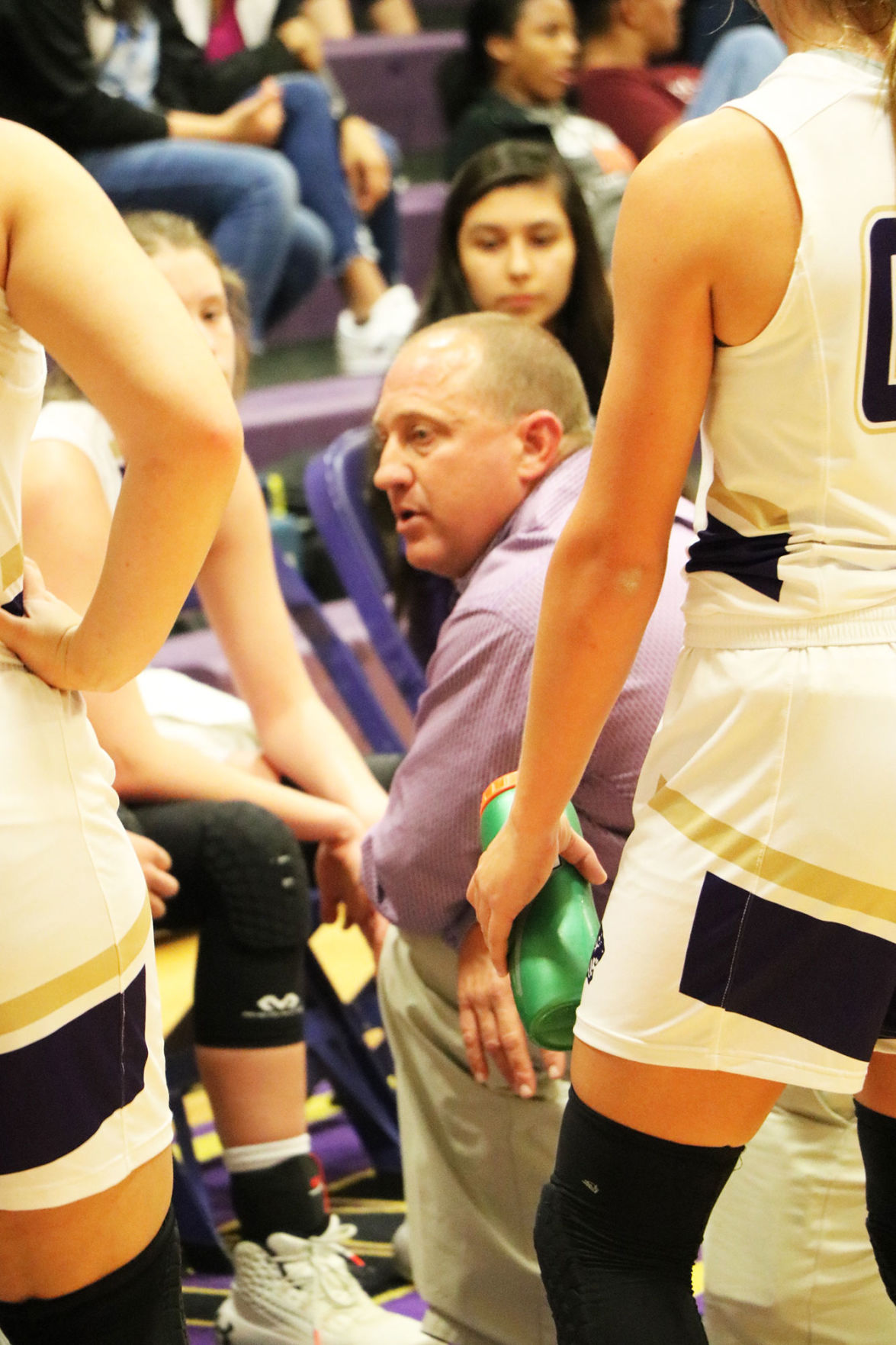 Navarro's head coach Darrell Harborth talks to the team during a timeout in the Panthers' loss to Gonzales on Tuesday night.

Navarro's Ian Osborne makes a short jumper in the Panthers's 56-51 win over Gonzales Tuesday night, Jan. 7, 2019. The win moved the Panthers to 2-0 in district play.

The Panthers' Keegan Pugh lays one in for Navarro in their win over Gonzales on Tuesday, Jan. 7, 2019.

Navarro's Micayla Hawes tries to score on the inside in the Lady Panthers' loss to Gonzales on Tuesday, Jan. 7, 2020.

Navarro's head coach Darrell Harborth talks to the team during a timeout in the Panthers' loss to Gonzales on Tuesday night.

Two crucial early season district games went down to the wire in a Tuesday night doubleheader at Navarro High School, as the Lady Panthers fell to Gonzales and the boys beat the Apaches in back-to-back games.

Both games were highly competitive affairs, as the Lady Panthers and Lady Apaches battled back and forth for a full four quarters, and the Panthers and Apaches game came down to the last couple of possessions.

The Lady Panthers and Gonzales came into the game at the top of  District 30-4A, and played a tight contest throughout.

But a Navarro scoring drought throughout the third quarter, when the Lady Panthers couldn’t get a bucket to fall, may have been the difference in the 51-43 loss.

Everything from three-point attempts to lay-ups seemed to be shot with the proverbial lid over the basket, with shot after shot going halfway down, before bouncing out, and Navarro managed just one made free throw in the quarter.

“I don’t know how many we had that rattled in and out,” head coach Darrell Harborth said after the game. “That’s how the game goes sometimes, I just wish it wouldn’t have happened in a big game like this.

“I don’t know if we scored one or two points that quarter. The fourth quarter we made our runs, we played with heart, played hard. But it seemed like every time we would get it within three or four points, they made a run back at us.”

While the Lady Panthers were not scoring in the third, neither was Gonzales, as the two teams combined for just nine points in the quarter and the game was still within reach with the Lady Apaches in front, 30-22.

But Navarro went on a 15-9 run over the first four minutes of the fourth quarter, getting two three-point plays from Tatum Harborth, a pair of free throws from Laylin Sturm and a three-pointer and two free throws from Sara Benner to cut the lead to two, 39-37.

A 5-0 run by Gonzales pushed the lead back to seven, and two successive trips to the free throw line by Navarro resulted in just two points as the Lady Panthers trailed by five with just two minutes left in the contest.

“We have a few less turnovers and make a few more free throws, it could’ve been a different story,” Harborth said.

That was as close as Navarro would get for the rest of the game, as the Lady Apaches made their free throws coming down the stretch, and would go on to win by eight.

For the game, Tatum Harborth and Sturm led the Lady Panthers with 10 points each, while Benner had nine.

The loss dropped the Lady Panthers (3-1, 16-10 overall) into a tie with Gonzales for the lead in District 30-4A. They travel to La Vernia on Friday night.

The Panthers and Apaches were tied at the end of the first two quarters in a game that had a one or two-point spread much of the night.

“I’ve emphasized to the kids the whole year so far that all we were trying to do is get ready for district,” head coach John O’Dell said. “We’ve had ups, we’ve had downs, but the team is getting better each game and hopefully that continues as we keep going through district.”

O’Dell played his starters to start each of the quarters, but employs what has been called a “shift change” strategy in his substitutions, seating all five starters and bringing in five new players at the end of the quarters.

The Panthers were pressing much of the game, and O’Dell wanted to keep up the energy on the floor.

“We try to make sure that we keep the kids fresh,” he said. “We’ve got enough kids that can play and we try to keep the pressure on them (the opponent) and not let them relax.”

After the tie at the half (26-26), the Apaches would go on a run in the third, building a six-point lead, before the Panthers made their big run in the game.

Navarro got 10 straight points from four different players, as Reece Rojas, Cooper Guetzke, Grant Chase and Nick Billings made buckets to give the Panthers a four-point lead, 42-38.

That led to Navarro outscoring Gonzales 12-4 to end the quarter, and the Panthers held on to a two-point lead entering the fourth, 44-42.

The game was tied at 48 halfway through the third, when Navarro got two easy buckets in transition from Guetzke and Chase to take the 52-48 lead.

The Apaches would score again to cut it to two with just over a minute left, but Gonzales would turn it over twice in the last minute, leading to another Chase score to push it back to four, and two free throws from Ian Osborne to seal it.

“It got down to the end where they had to foul,” O’Dell said. “We keep track of every free throw, and we know who our best guys are. They all take pride in making sure they are ready if they are the guy at the line.”

Chase would lead the Panthers on the night with 19 points, while Guetzke had 11 and Osborne, nine.

“In the focus of the team, Chase has a lot of opportunities,” O’Dell said. “He might have a good night one night, everybody will have their night. Tonight he played a little better, next time hopefully somebody else will step up.”

The Panthers also travel to La Vernia on Friday night.

The Seguin boys got a second district win in a row, beating SA Memorial on Tuesday night in San Antonio, 80-51.

Gerrit Twitero led the Mats in scoring again with 21, while Chris James had 18 and Joseph Vela, 11, in the win.

Taylor Bode and Tresalyn Roberts had 13 each, while Cyan Clack had 10, and Reese Brittain and Kaitlyn Ranft had nine apiece in the win.

The Marion girls (8-15) fell to Fredericksburg, 59-23, with Sarah Cooke getting nine points and Lizzie Abrameit, six, in the loss. The Marion boys (10-11) fell to Devine, 48-30, after a tough shooting night, making 11-of-36 field goal attempts. Ryken Autry led the Bulldogs with 11 points, the only player in double figures.