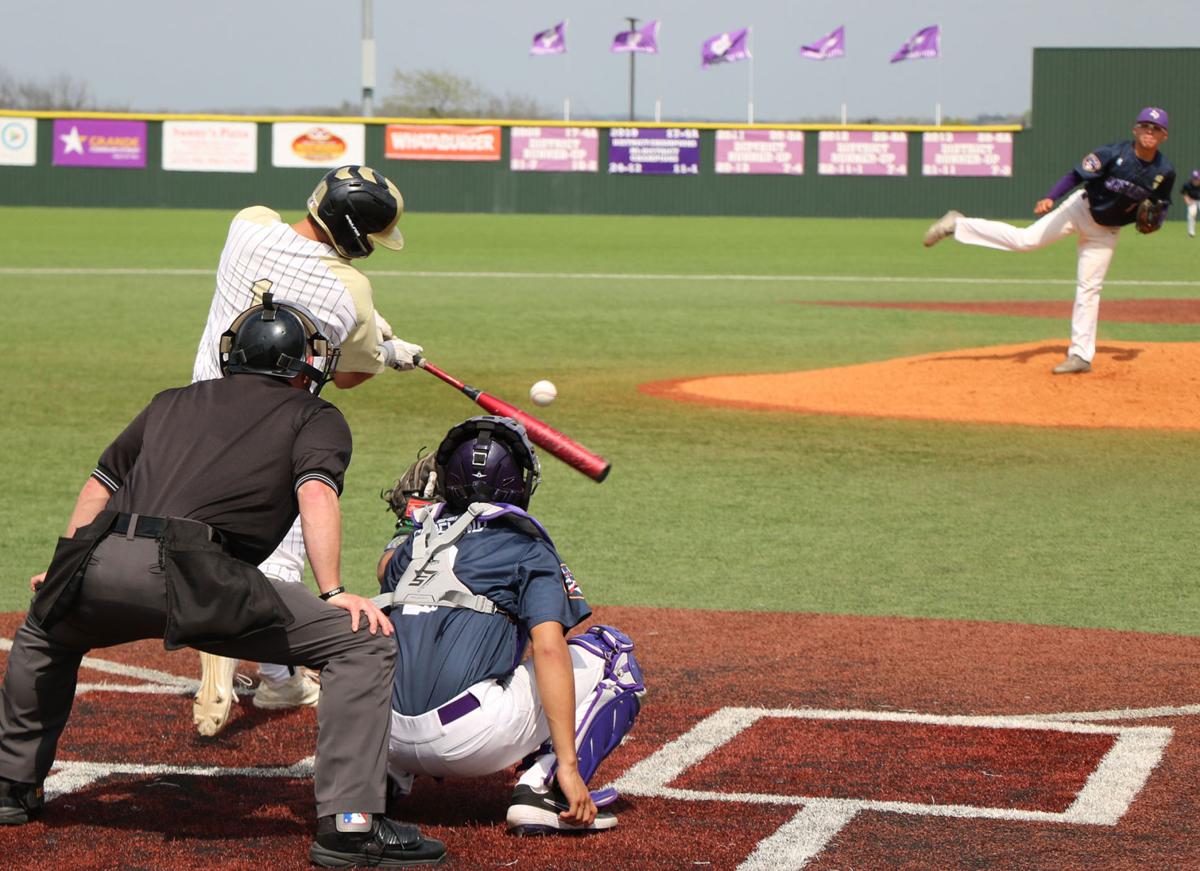 Seguin's Chase Boenig gets ahold of a pitch for a double in the Mats' loss to San Marcos on Friday, March 13, 2020. 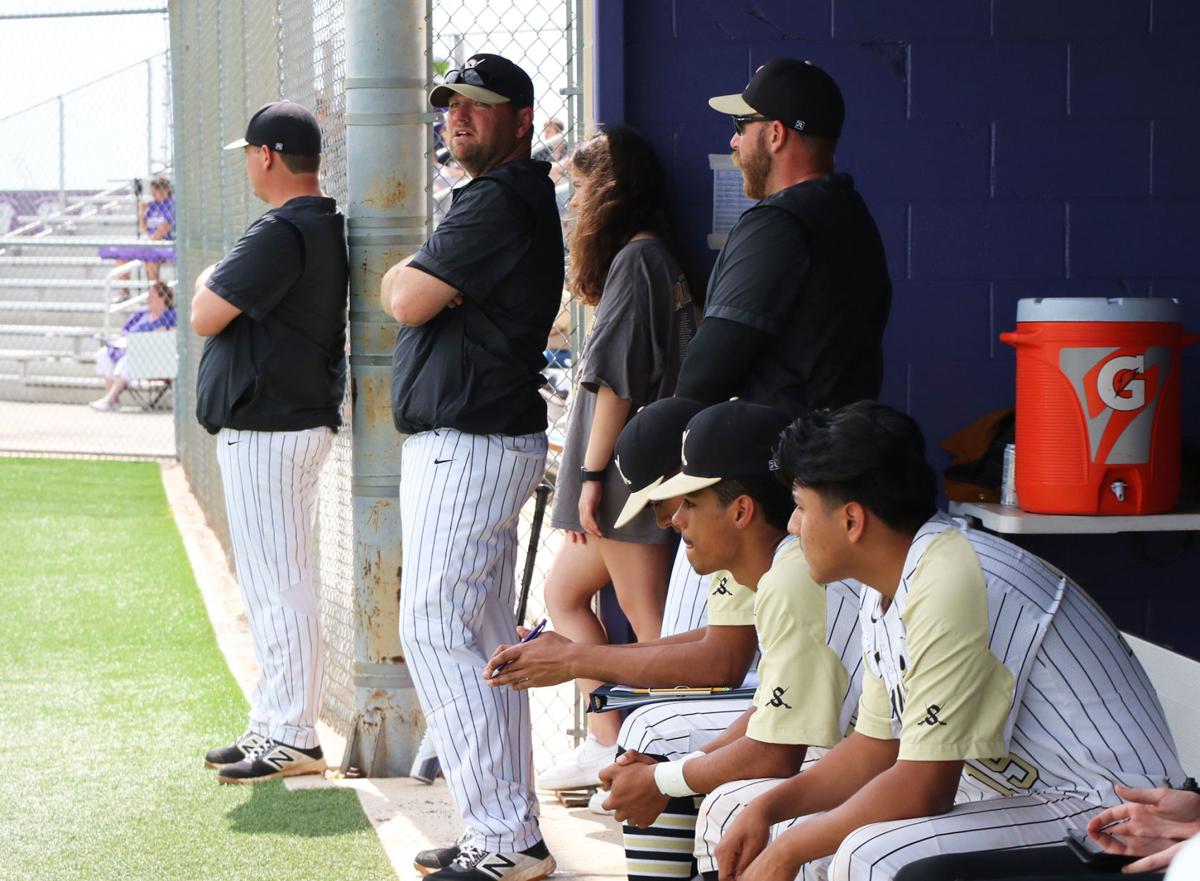 The Matador coaches and players watch the action from the dugout during the San Marcos tournament on Friday, March 13, 2020.

Seguin's Chase Boenig gets ahold of a pitch for a double in the Mats' loss to San Marcos on Friday, March 13, 2020.

The Matador coaches and players watch the action from the dugout during the San Marcos tournament on Friday, March 13, 2020.

The Seguin Matadors got some great pitching from Heston Osborne on Friday afternoon in the shortened San Marcos tournament, but were unable to push any runs across the plate in a 4-0 loss to the host Rattlers.

Osborne scattered six hits over six innings of work, and just two of the 6A Rattlers’ four runs were earned in the contest, as Seguin gave up two runs with some miscues in the third inning.

“He pitched really well,” head coach Dusty Brittain said. “To come off of a game where he had a really rough outing, to come back and throw a lot of strikes and let us make plays, I was really proud of him.”

Chase Boenig and Osborne had the only two extra base hits in the game, but both failed to make it home after their doubles put them in scoring position.

“In the morning game we struggled early, then the bats came alive, so that was promising,” Brittain said. “But in this one the pitcher kept us off balance and we didn’t hit the ball well.

“We gave up two unearned and that didn’t help, but regardless of that if we don’t score runs, we can’t win games.”

The Rattlers scored twice in the first inning for the early 2-0 lead, then took advantage of a couple of Mats’ errors in the third for the final margin.

The Mats fell to a very tough Pioneer team earlier in the day on Friday, 11-3, in a time-shortened game of five innings. Pioneer was a state semifinalist last season.

“We played two good teams today,” Brittain said. “It’s a good tournament, that’s why we come. We need to play good quality teams and play good games — that’s what these tournaments to me are about, us getting better — it’s not about wins and losses.”

Tristan Moreno went 3-3 in the game, scoring a run and collecting an RBI, while Cory Mazzurana and Michael Hernandez drove in the other two runs for the Mats.

Seguin started the tournament on Thursday with a 10-2 win over Ellison, pushing four runs across the plate in the third and adding five more in the fifth for the win.

Moreno picked up the win on the mound, scattering seven hits over six innings and giving up just the two earned runs in the second inning.

Drew Burnett went 3-3 with two RBI’s and a run scored, while Hernandez was 3-4 with three runs scored and a pair of RBI’s. Charles White, Osborne and Mazzurana, who had a home run in the contest, got the other RBI’s for the Mats.

“Drew played well in the tournament, and in that one Mikey (Hernandez) hit the ball well with two triples and a double,” Brittain said. “Drew was 3-3 in that game too, so he had a pretty good weekend.”

With that win, the Mats went 1-2 over the two days of the tournament and were supposed to play another contest on Saturday, but Saturday’s play had already been canceled by the San Marcos ISD.

“San Marcos had canceled all activities for tomorrow,” Brittain said, first hearing the last day of the tournament would not be played on Thursday evening.

Shortly after the game, the UIL suspended all sanctioned contests for about two weeks on Friday, until March 29.

“I’ll get more word from coach Bush later on, but we’re scheduled to play Harlandale on Tuesday and we’ll get ready for that,” Brittain said after the game — about 30 minutes before the UIL sent out the press release suspending spring sports seasons for the most of the rest of March.

The Mats are 7-8 on the season and are currently in fourth place in District 26-5A with a 2-2 record.