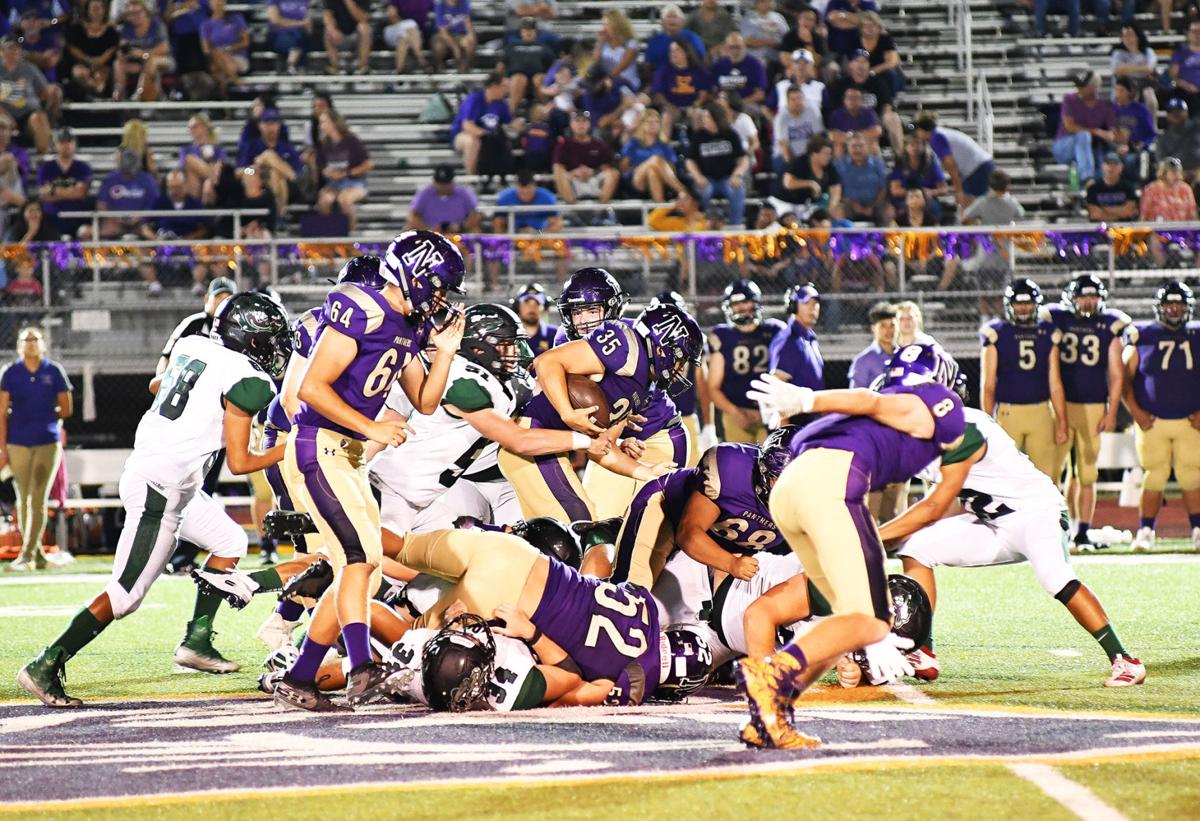 The Marion defense brings down Navarro running back Ethan Thomas (35) for a short gain on Friday night, Sept. 6, 2109 at Erwin Lee Field. Navarro rolled to 41 first half points in the 55-15 win. 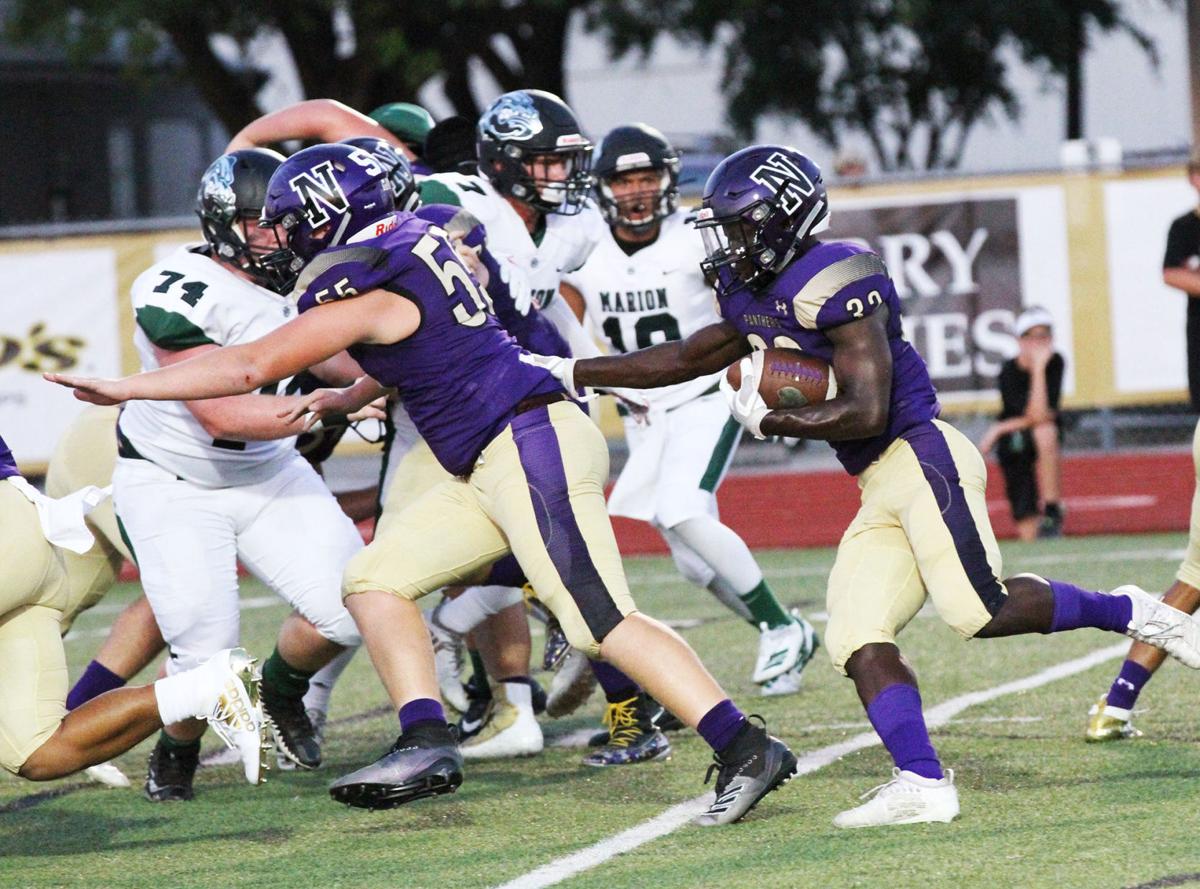 The Panthers Moise (Momo) Sims follows his blocks into the line during Navarro’s win over Marion on Friday night, Sept. 6, 2019.

The Marion defense brings down Navarro running back Ethan Thomas (35) for a short gain on Friday night, Sept. 6, 2109 at Erwin Lee Field. Navarro rolled to 41 first half points in the 55-15 win.

The Panthers Moise (Momo) Sims follows his blocks into the line during Navarro’s win over Marion on Friday night, Sept. 6, 2019.

The Marion Bulldogs’ hopes for breaking their losing streak against the Navarro Panthers came crashing down on Friday night as they fell by a 55-15 score to their long-time rivals.

Most of those games had the same storyline as Friday’s contest, with the Panthers running wild in their Slot-T offense. Navarro racked up 434 yards and eight touchdowns on the ground against Marion, continuing success that has seen them average more than 53 points per game against the Bulldogs in those 10 wins.

Running back Euler Deleon scored four of those touchdowns Friday while rushing for 143 yards.

But unlike in their last two meetings, Marion (1-1) could not get its offense on track. The Panthers’ defense limited them to 144 total yards and just 10 yards on the ground. They were forced to punt seven times.

Marion head coach Ryne Miller saw it was a learning opportunity for his young team.

“We’re very young on offense with four new starters up front,” he said. “We knew we were going up against a tough defense, especially against the run.

“Our kids got to see the physicality of a state ranked Class 4A team. It is a rivalry game but in the grand scheme of things it is about getting us ready for district and that’s why we like playing tough opponents like Navarro.”

The Panthers did not come charging out of the gate, however. Their first play from scrimmage was a false start penalty and was followed by a short gain, an incomplete pass, and a fumble they recovered but for no gain.

It was not the start that Navarro head coach Rod Blount wanted to see.

“It was the same thing as last week when we put the ball on the ground on the first series,” he said. “We need to come out and execute better than that.”

Their execution would improve in this game as they scored touchdowns on their next seven possessions.

The first came after Myles McCord returned a Marion punt 30 yards to the Bulldogs’ 34-yard line. Deleon scored on the next play on a run up the middle, carrying a Marion defender with him for the last eight yards.

The Bulldogs’ next series ended with the kind of self-inflicted wound Miller knew they could not allow. Following a three-and-out, a snap sailed over the punters’ head and was recovered by Navarro’s MoMo Sims at the Marion six-yard line.

Deleon would score on a six-yard run on Navarro’s next drive, capping a five-play, 57-yard drive.

On the Panthers’ next possession, they would take to the air. Sam Muniga, who is alternating with Billings behind center, hit running back Johnny Alegria for a 53-yard pass play to the Marion 24-yard line.

Two plays later, Sims would cut through the defense for a 21-yard touchdown run to extend Navarro’s lead to 27-0, just 10 seconds into the second quarter.

Running back Kyle Dietert then gave the radio announcers something to shout about, breaking tackles and turning on the jets for a 75-yard touchdown run.

The Bulldogs followed that score by finally sustaining a drive, marching 75 yards in eleven plays. Receiver Jayden Williams made the key play of the drive when he caught a screen, broke free from would-be tacklers, and raced 38 yards to the Navarro two-yard line. Running back Liam Christensen scored on the next play to get Marion on the board with 2:09 left in the half.

The Panthers’ next possession would result in a scare when Alegria took a shot on an incomplete pass. The standout tailback did not return to the game. Blount said afterward that it appeared to be an elbow injury and he would get a fuller evaluation from doctors this week.

Two plays later, sophomore running back Konner Schwarzlose converted a fourth-and-13 with a 45-yard run to the Marion 18-yard line. Deleon scored on a one-yard plunge as the half expired, giving Navarro a 41-7 lead at the break.

Deleon would open the scoring in the second half with perhaps his best run of the night. On that play, he broke three tackles near the line of scrimmage, stumbled for a few yards, and then regained his balance to fly through open field for a 49-yard touchdown run.

The Bulldogs would score twice in the third quarter. The first score came on a safety when Navarro had its own punt snap sail too high. They followed that on their next series when quarterback Zachary Goodwin escaped heavy pressure and rocketed a perfect pass on the run to receiver Samuel Montoya for a 35-yard touchdown completion.

The conversion attempt failed, leaving the Panthers with a 48-15 lead going into the fourth quarter.

Navarro would close the night’s scoring in the middle of the fourth quarter when running back Matthew Gilliam motored through the line for a five-yard touchdown run.

“I think our offensive line got more comfortable where they could play faster and more aggressive this week,” he said. “And our defense reacted quickly and flew to the football. On most of the plays, I looked up and there were nine guys around the ball.”

The win moves Navarro to 2-0, the seventh straight season that they have started with that record.

Marion will try to rebound next week when they play their home opener against the Blanco Panthers. Navarro will be on the road, trying to avenge a 42-32 loss last season to Marble Falls.