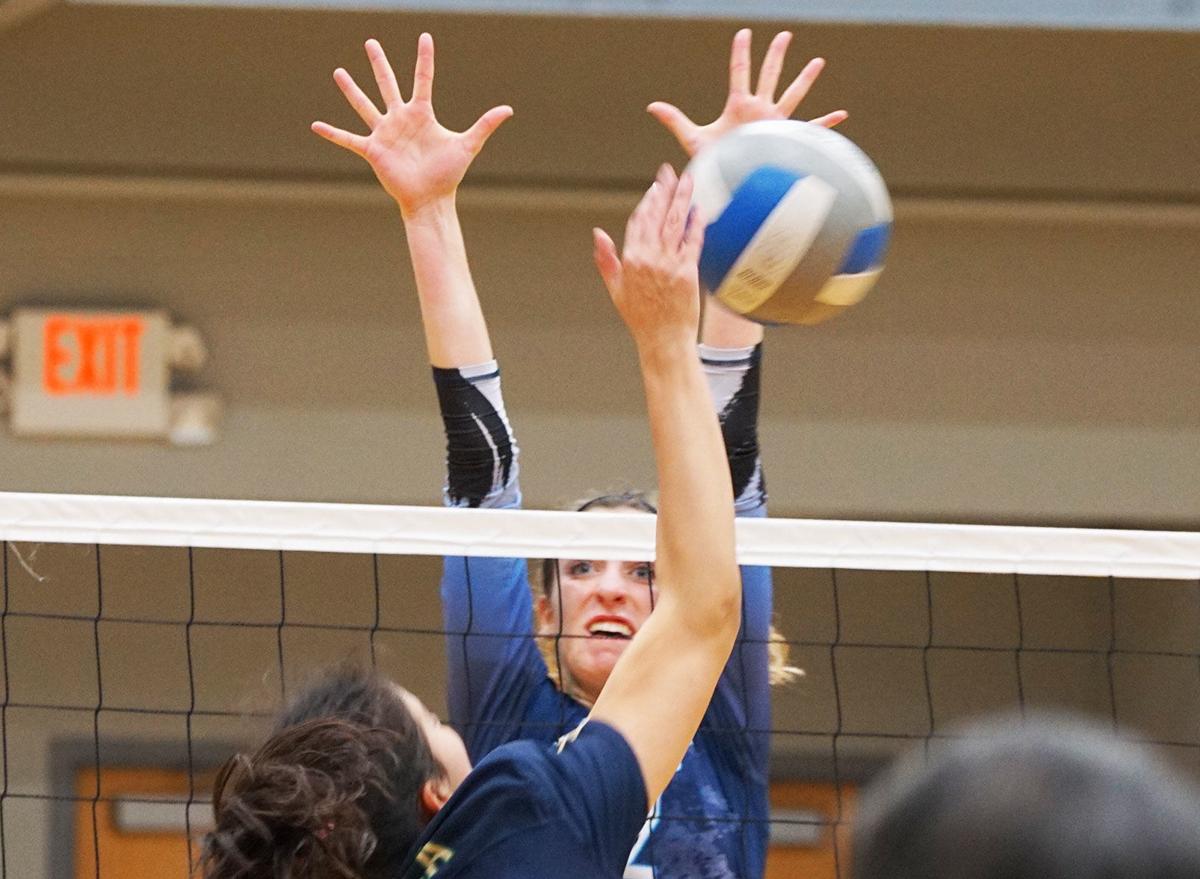 Lifegate’s Gracie Peters goes up for a block in the state semifinal match in October.  Lifegate won the match and went on to win the TCAL 2A state championship, while Peters was named the tournament MVP. 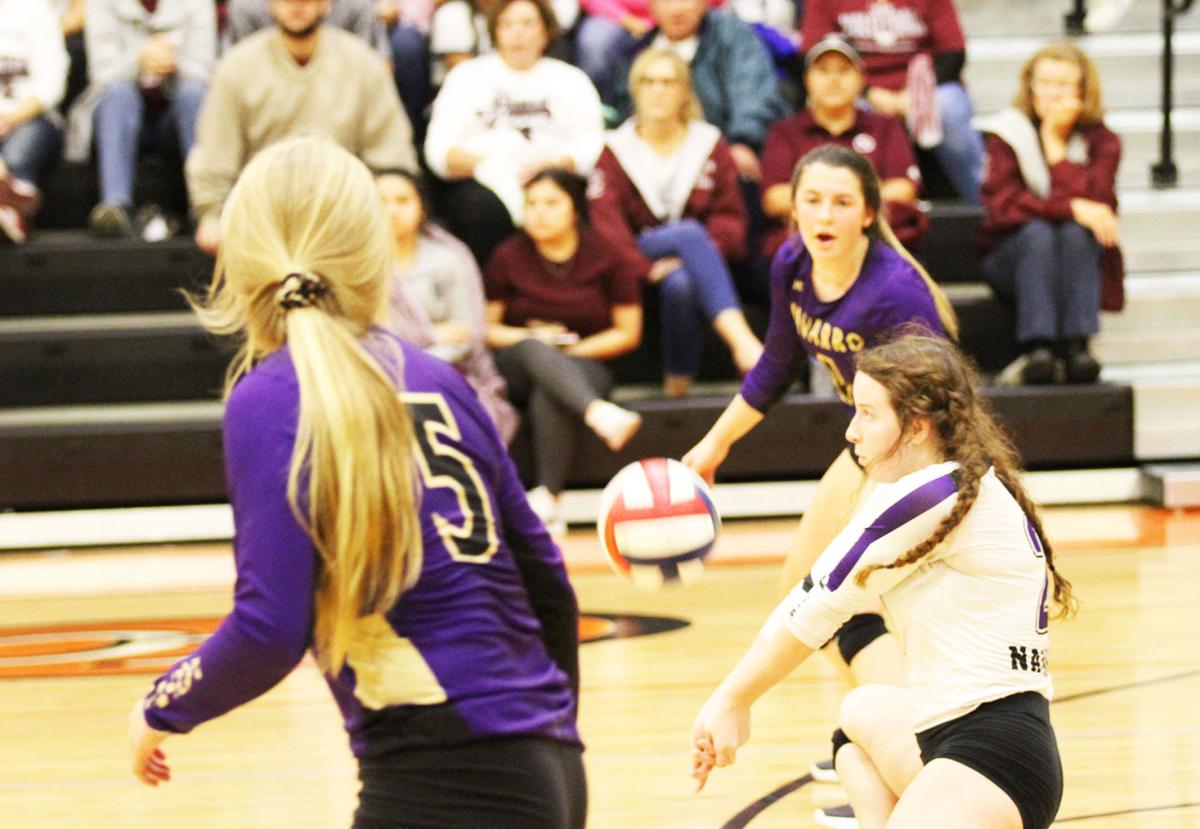 The Lady Panthers’ Carolym Burch digs out yet another shot in the five-set playoff win over Sinton in November.

Lifegate’s Gracie Peters goes up for a block in the state semifinal match in October.  Lifegate won the match and went on to win the TCAL 2A state championship, while Peters was named the tournament MVP.

The Lady Panthers’ Carolym Burch digs out yet another shot in the five-set playoff win over Sinton in November.

In a 2019 volleyball season that saw all of our area teams make the playoffs, postseason honors have poured in for the teams from Seguin, Navarro, Marion and Lifegate.

As a precursor to the Gazette’s All-Area Volleyball teams coming next week, coaches from each of the schools spoke about the girls that received All-District honors and made a big impact on their squads this season.

The Lady Panthers made a deep run into the playoffs this season, finishing the year 37-9, ranked in the top 10 in 4A in the state, and making the regional semifinals.

Senior hitter Kelly Helms was the Co-Offensive Player of the Year in District 30-4A and made the 4A All-State team from the Texas Girls Coaches Association.

Helms had 504 kills this season alone, and passed the 1,000 kill mark for her career at Navarro in October.

“Kelly led our offense and sometimes carried our offense,” head coach Nicole Blakeman said. “She was our captain, leader and made the All-Tournament teams at Devine and San Antonio Christian.”

Burch, a senior libero for the squad, also made the All-Tournament teams at Devine and SAC, and accumulated an amazing 819 digs for the year.

“She led our defense,” Blakeman said. “Our defense was a lot of the reason that we were in a lot of our games.”

Benner, a setter, led the team in assists this year with 779, setting up Helms and McCaig for kills. She was an alternate for the Texas Association of Volleyball Coaches All-Star 4A team.

McCaig was second in kills on the team with 229 for the year.

“Maddie hits the ball hard and was very explosive on the floor,” Blakeman said.

Second teamers Hoffman and Brumley had 154 and 104 kills, respectively, with Brumley adding 546 digs during the season.

“Haley is a smart and consistent player,” Blakeman said. “She was doing really well but had an injury, then came into her own during district. Nelly was a defensive specialist and sometimes a hitter, had tremendous ball control and did a good job for us, especially only being 5-foot-3.”

The Lady Mats had a brutal opening district schedule, but came back to finish fourth in district and qualify for bi-district.

Harrington was a three-year letterman on varsity and led the team with 382 kills for the season.

“With the youth on the team, Julianna was one of the only ones that really had experience,” head coach Kristi Stanley said. “We definitely tried to utilize her as much as possible. She played as our middle hitter most of the time, but if our ball control wasn’t good enough we would switch it around and put her outside. She did a phenomenal job for us all season.”

Setter Riley Brittain set up Harrington and other hitters on the team all year, leading the team with 706 assists. Sister Reese would relieve her at times and checked in with 254 assists for the year.

“Riley pretty much ran our offense for the year,” Stanley said. “We used her last year in the same role, but with Riley’s experience, we ran her almost the entire time as a setter. They’re like the quarterback of the team — they need to know who’s on, who’s struggling sometimes also, and she (Reese) came in and did a great job, especially as a freshman. We were able to use Riley as a hitter when she was on the front row, instead of as a setter.”

“Amasti anchored our serving and our defense,” Stanley said. “You’re looking for that kid, that no matter where that ball is, they’re not going to let it hit the floor. She did not have as much court experience coming in, but led the team defensively and overall did a great job.”

Muenchow and Bode were outside hitters for Seguin this season and finished the year with 258 and 224 kills, respectively.

“The outside hitters have a tough job,” Stanley said. “You really have to have somebody out there to put the ball away. If one was struggling, the other person did a great job of coming in and putting the ball away.”

“In some key games they really were on — the win against Kerrville and Wagner — they did an incredible job of being smart and letting the other team make errors, which allowed us to take a lead and take the advantage.”

The Bulldogs finished fourth in district and made the playoffs before being eliminated in the bi-district round by Johnson City.

Making the All-District first team were Lizzie Abrameit and Madyson Schulze; Toryn Autry and Madison Doss made the second team; Lily Bek and Ingrid Nava were honorable mention honorees; and Hayley Mabee was the Newcomer of the Year.

Mabee, a freshman, played libero for the Bulldogs and impressed coaches throughout the district, head coach Taylor Creamer said.

“Hayley was a huge asset to our team right off the bat,” Creamer said. “Even as a freshman, she was a huge presence in the back row — she had more than 300 (331) digs this season, and received a lot of compliments from coaches around the district.”

Abrameit, a senior outside hitter and setter, was the team leader in kills this season with 192, and the assist leader with 385.

“Lizzie never came off the floor,” Creamer said. “She’s a great setter, hitter and she can block. She’s a fierce player and has a lot of passion for competing, whether it be for volleyball or basketball. She hates to lose and put the team on her shoulders all year.”

Schulze, also a senior, was second on the team with 188 kills and contributed with 77 aces this season.

“Madyson was just the type of person that no matter what came her way she was going to take a swing at it,” Creamer said. “She can hit with both hands, left or right, so she was able to surprise some people — she would swing with her left hand and be able to put the ball  down.

“She and Lizzie are both going to be missed next year.”

Autry, a junior, played opposite Abrameit much of the year as the other outside hitter and finished the year with 113 kills. Doss, a junior setter, led the team with 401 assists on the season.

“Both are great volleyball players,” Creamer said. “They know the game and both have come a long way, worked really hard this year and were a big part of our success.”

Bek and Nava were defensive specialists for the Bulldogs this season.

“With Lily and Ingrid getting honorable mention, our entire back row received All-District honors,” Creamer said. “I believe we had one of the best defenses in district. With Hayley, Ingrid and Lily, they didn’t let anything touch the ground.”

The TCAL 2A state champs for the second year in a row, the Lady Falcons finished the year 15-4.

Gracie Peters was an All-State first team selection, as was fellow senior Kayla Hallmark. Peters was named the MVP of the state tournament and has signed to play volleyball at Texas Women’s University in Denton.

“Gracie is an amazing athlete,” head coach Jinny McCulloch said. “She was very instrumental in our wins and of course the state championship. Her and Kayla are both just wonderful young ladies, both strong in their faith and both love the game.

“It made it easy for me and coach Green to coach the team when we had athletes like this.”

Hanah Osborne, Hannah Green and Sarinna Skrzycki were all named to the All-State second team.

“Hanah (Osborne) quickly rose in the ranks as our libero,” McCulloch said. “She’s a phenomenal defensive player. As a sophomore, Hannah Green stepped up and stepped into a spot that she shared with Kayla. Having our other setter out, she helped Kayla out so that we could run double setters. I look forward to having her back so we can run dual setters again next season.”

Skrzycki was an outside hitter and middle hitter for the Lady Falcons this season.

“Sarinna has some middle blocks that are good, has grown as a player and will do really well next season,” McCulloch said. “She’ll be helping us to fill those two seniors' spots.”