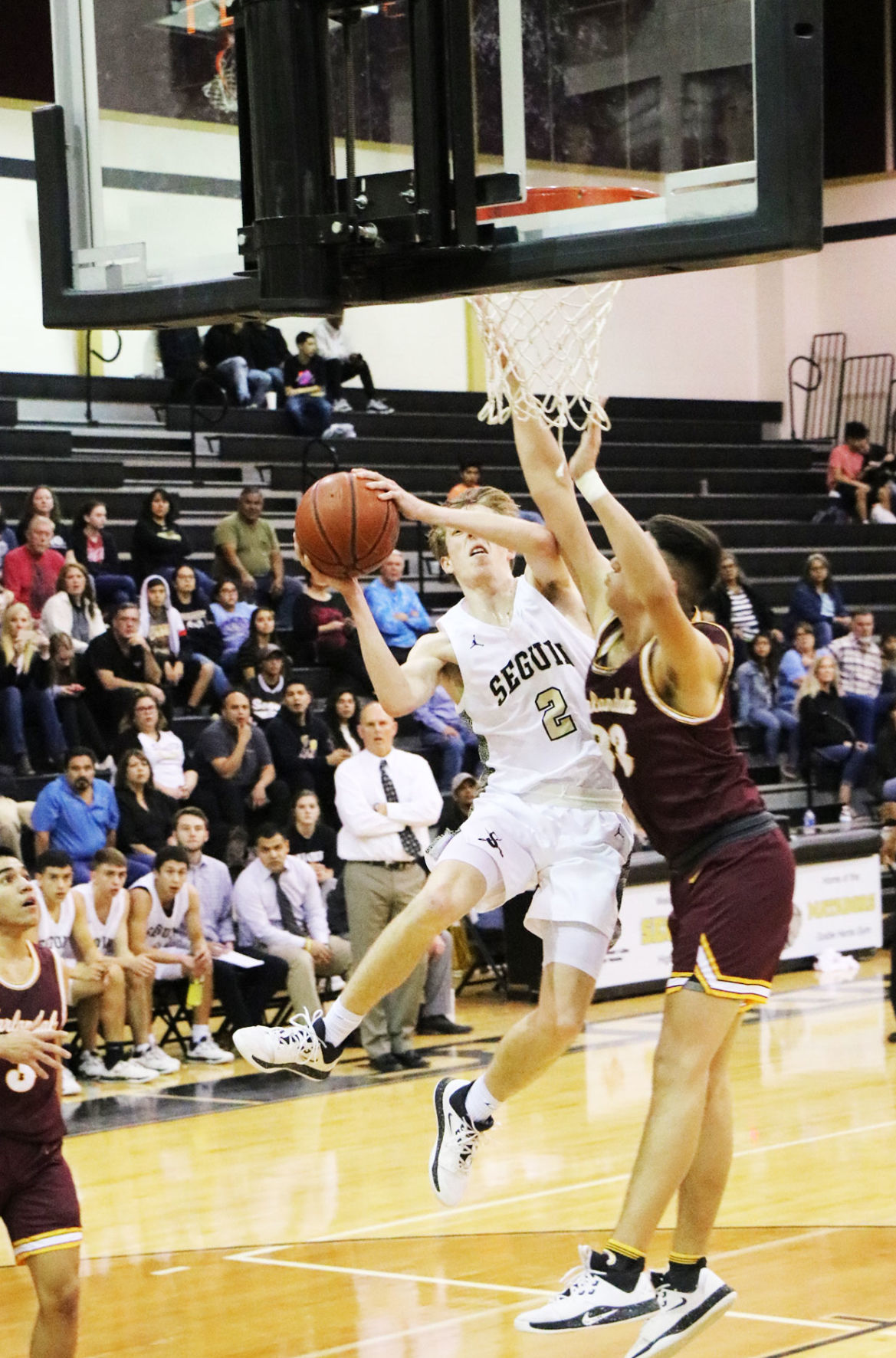 Seguin's Gerrit Twitero (2) goes up for two with a defender in his face in the Mats' overtime win over Harlandale on Tuesday, Jan. 28, 2020. 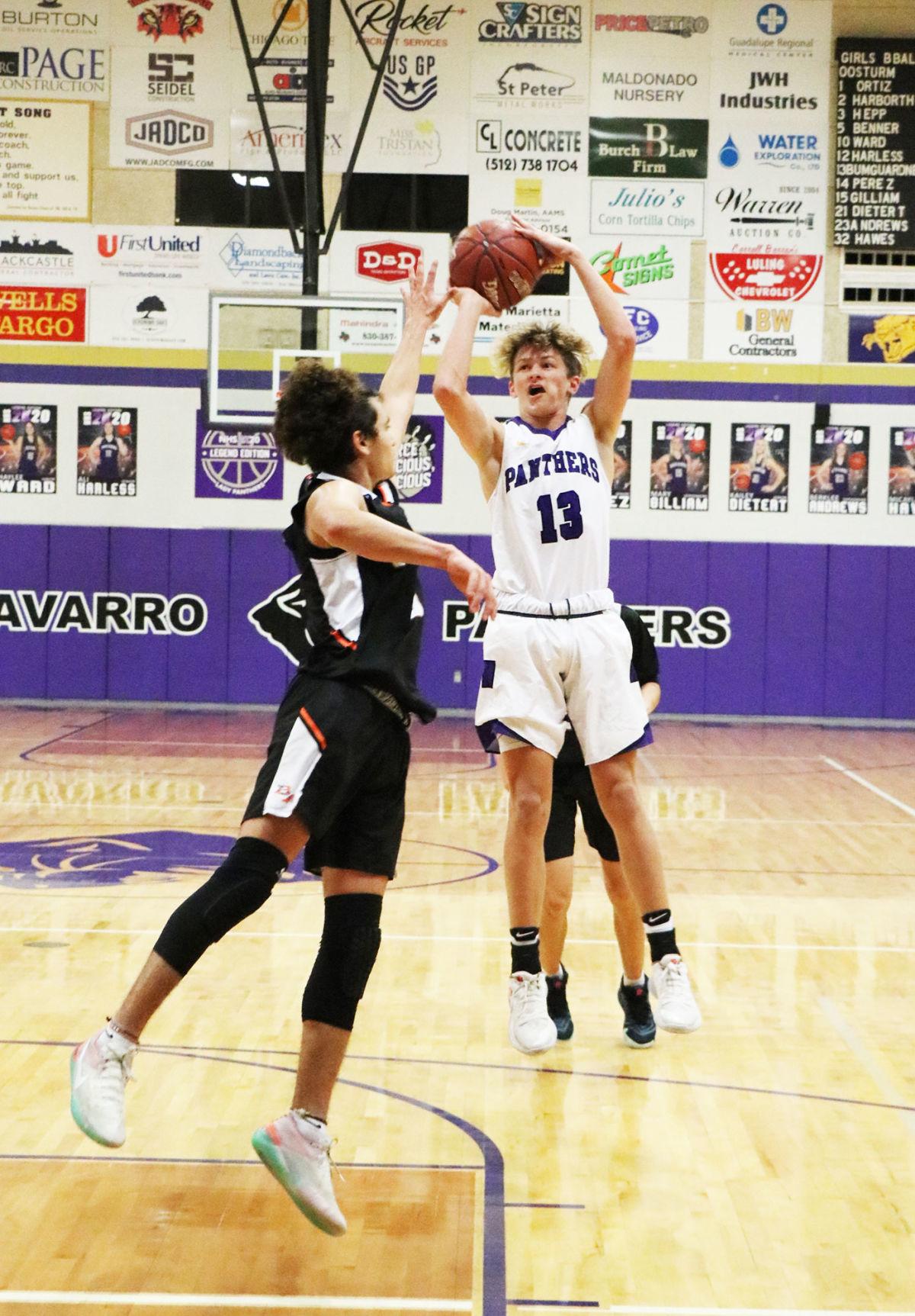 Seguin's Gerrit Twitero (2) goes up for two with a defender in his face in the Mats' overtime win over Harlandale on Tuesday, Jan. 28, 2020.

Tuesday night was an incredible night for high school basketball in the area, as the Seguin Matadors and the Navarro Panthers treated fans to a couple of thrilling ball games.

At Seguin, the Matadors got a bucket at the buzzer in overtime for a huge win over Harlandale, 61-59, and about an hour later, the Panthers got a bucket with four seconds left to beat Brooks Academy, 48-46.

Two crucial district games went down to the wire on Tuesday night.

The atmosphere was playoff-like for the Mats at Goldie Harris Gym, as Seguin’s season is coming down to the last few games to determine if they will make the postseason in 2020.

And when Gerrit Twitero got a steal with just five seconds left in overtime, hit Joseph Vela on the outlet, and Vela drove in to lay it off the glass right as the buzzer sounded, Seguin had a huge two-point win over the Harlandale Indians.

Students rushed the court, high-fiving and chest bumping with players celebrating in the middle of the floor.

“It was kind of like March Madness out there,” head coach Dwayne Gerlich said after the game.

Seguin (6-5, 15-13 overall) came into the game trailing Boerne Champion by a half game for the fourth and final playoff spot out of District 26-5A.

Harlandale (8-2, 19-6) had just one district loss in nine games, that to district leader Wagner.

But the Mats took the game to the Indians all night, forging small leads in the second and third quarters — only to see the Indians fight back into the game every time.

“I thought it was a great defensive effort by the whole team,” Gerlich said. “The bench was a great help, especially in the first half when the starters got some rest.

“No matter what the score was, what the situation was, the defense came up with big play after big play. The defense led to some easy offense and it led to the win in overtime.”

Seguin was up by as many as seven early in the third quarter, after Chris James drove in for two at the start of the period for a 36-29 lead.

The Mats had several chances to extend the lead, but Vela missed a wide-open three and the Indians went right back down to get a three of their own to close the lead to three, 39-36. The Mats went into the fourth up by that margin at 45-42.

The fourth saw Harlandale come back to take the lead, holding Seguin to just two points as they went on a 6-2 run to regain the advantage, 48-47.

Vela got fouled on a layup attempt that just rolled out, but made both free throws with 1:16 left to pull the Mats back to within one at 52-51 with 1:16 left.

After Seguin created a turnover, R.J. Acuna was fouled with 34 seconds left and calmly sank the first free throw to tie it at 52-52, but his second free throw was halfway down before popping back out, and the game remained tied.

Good defense created a poor three-point attempt from Harlandale with five seconds left, and the game went into overtime.

Seguin got its majority of points from the free throw line in the fourth quarter and the overtime session, hitting 7-8 from the line in overtime to stay with the Indians, setting up the Twitero steal and Vela layup to win the game.

“When we were behind, we had to step up the defensive pressure full court,” Gerlich said. “We got a couple of steals and attacked the rim, I think that was the big thing. We weren’t just pulling up to shoot. It’s better to get the ball inside if you can and hopefully you’ll get fouled, if you don’t make the layup.”

The Mats had four players in double figures; Vela had 14, James had 12, Twitero, 11 and Acuna, 10. Tyson Coleman came off the bench for seven, and Joey Ornales hit a big three in the first half as the Mats rested their starters.

“The balanced scoring was a huge factor,” Gerlich said. “Look at our four players in double figures, they couldn’t just key on one player. The bench was a big help tonight too, we got some good help scoring and defensively.”

Seguin has Friday off before hosting SA McCollum next Tuesday night at Goldie.

At Geronimo, the Panthers are in the thick of the playoff hunt in District 30-4A, and got a big win to stay in the race against Brooks Academy.

But like the game at Seguin just an hour before, it came down to the last seconds.

It was Navarro’s Ian Osborne that made the play with just five seconds left in the contest, getting a steal and driving in for the winning layup to get the 48-46 win.

“Like we always tell the kids, this is the most important game of the year,” head coach John O’Dell said. “Why? Because it’s the next one.”

After trailing at the half by five, 26-21, the Panthers went down by 13, (37-24), with about three minutes left in the third quarter, before two threes from Nick Billings and the old-fashioned three-point play from Joshua Linton got them back in the game at 37-33 over the next two minutes.

Navarro clawed into the lead with a 13-5 run in the fourth quarter, getting points from five different players in the stretch to go up 46-42 with two minutes left.

“It was a true team win,” O’Dell said. “The starters were struggling a little bit, getting frustrated, so we put the next group in and they would give us a spark. All five guys were hustling, getting after the ball, and they got us back in the game and we were able to finish it with the other group.”

O’Dell brought full court pressure in the second half to try to create some turnovers, and the Panthers got turnovers that led to easy baskets during the decisive second half run.

“When a team sits back in a zone, you’ve got to try and create some situations were you can get more looks,” O’Delll said. “We press as much as we can, sometimes the whole game, but sometimes you have to go in and out of it.”

The coach noted that the team is doing a better job of staying under control in key moments during the game.

“We did a good job of not panicking and throwing bad shots up,” O’Dell said. “It’s something we’ve had to work on. Early in the year, when we would get turnovers, we would jack up a bad shot and it wouldn’t turn out good.”

Navarro outscored the Bengals 15-9 in the fourth quarter to complete the comeback.

Cooper Guetzke had 10 points to lead the Panthers, while Osborne and Billings had eight apiece.

Gonzales lost to Cuero on Tuesday, setting up Friday’s Lady Panthers game at Gonzales (7-1) as a possible district title game.

Freshmen Laylin Sturm and Tatum Harborth led the way with 11 and 10 points, respectively, with Ryanne Hepp getting eight.

The Lifegate Falcons evened their record at 6-6 after a 55-30 win over SA Town East. Quinten Shelnutt had 18 to lead the Falcons.

Kevin Duke is the sports editor of the Seguin Gazette. You can email him at sports@seguingazette.com .