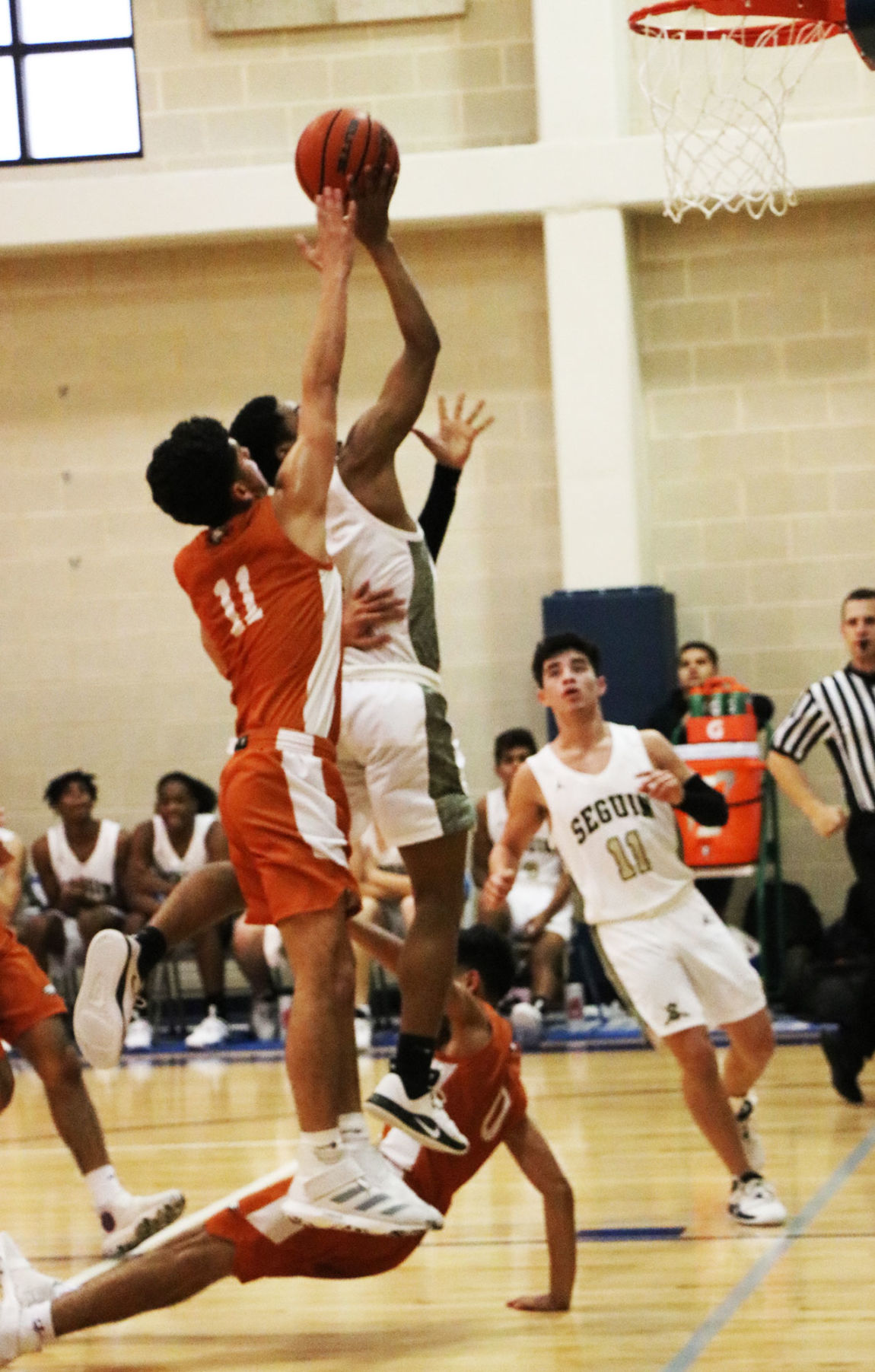 Seguin's Chris James goes up for two in a crowd during the Mats' win over Eagle Pass in the River City Classic tournament on Friday, Dec. 13, 2019. 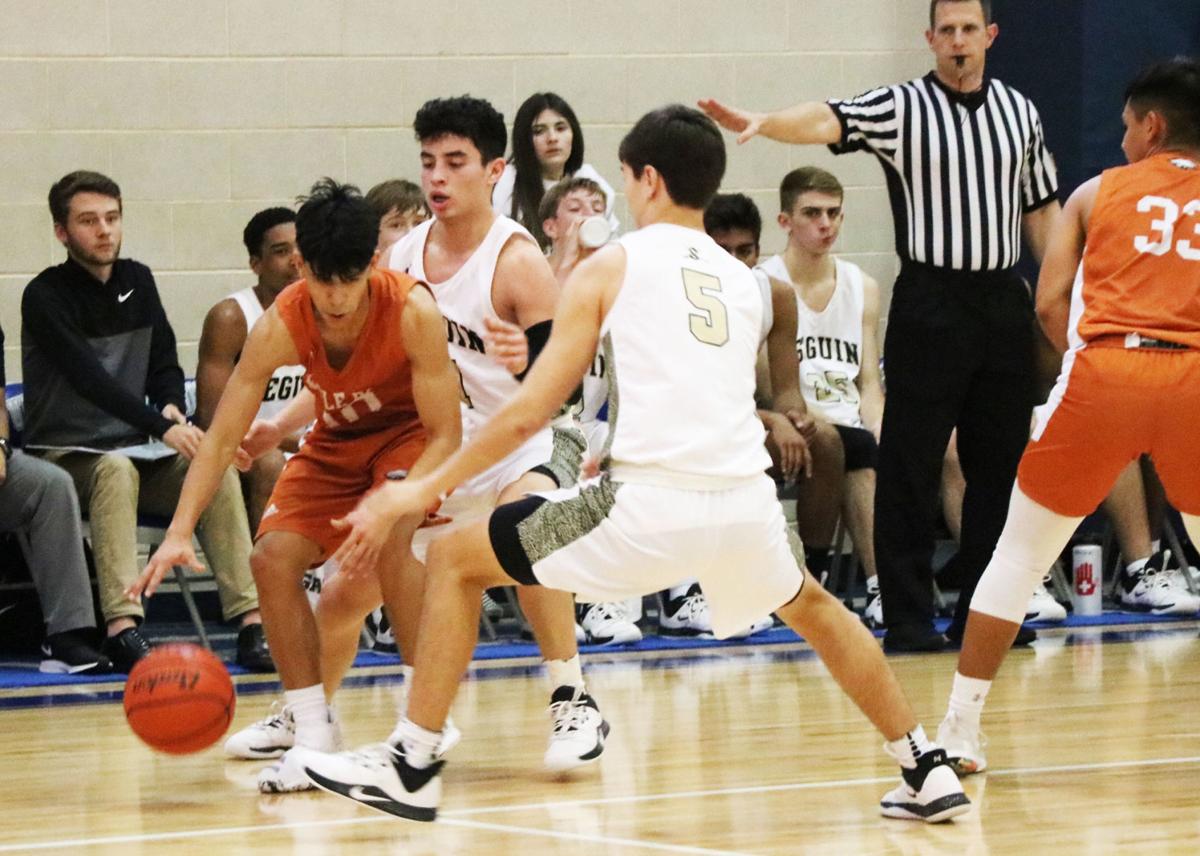 Seguin's Joseph Vela (left) and Tyson Coleman (5) trap an Eagle Pass guard in the Mats' 77-52 win over the Longhorns in the River City Classic in New Braunfels on Dec. 13, 2019.

Seguin's Chris James goes up for two in a crowd during the Mats' win over Eagle Pass in the River City Classic tournament on Friday, Dec. 13, 2019.

Seguin's Joseph Vela (left) and Tyson Coleman (5) trap an Eagle Pass guard in the Mats' 77-52 win over the Longhorns in the River City Classic in New Braunfels on Dec. 13, 2019.

It’s how the Seguin Matadors want to play.

In a return to the Mats preferred style of basketball, Seguin used full court pressure and traps to create turnovers against Eagle Pass at the River City Classic on Friday, and coast to 77-52 win over the Longhorns in the long running New Braunfels tournament.

Seguin went on extended runs in the second and third quarters to put the Longhorns away, using turnovers off the pressure to get easy baskets on the other end of the floor.

Seguin assistant coach Guy Nowlin took over for head coach Dwayne Gerlich for the final quarter, as Gerlich had a plane to catch to attend his son’s graduation from West Texas A&M.

Nowlin liked what he saw from the defense during the decisive runs.

“That’s the kind of style we want to play, to force the issue and speed up the tempo of the game,” Nowlin said. “Obviously opponents can dictate some of that. Today with our opponent, we felt we could get back to the way we want to play.”

The Mats were up 25-17 in the second quarter, when the traps of the Longhorns’ top two scorers began to work, and Seguin went on an 11-0 run to increase the lead to 19.

“During that run we got better at securing those traps,” Nowlin said. “We wanted to take the ball out of those guys hands and make somebody else beat us. It led to easy transition buckets for us on the offensive end.”

But the Longhorns came back and made it interesting, closing to within 10 at the end of the half, and to eight with 4:43 left in the third quarter at 43-35.

Once again though, the trap created turnovers and Seguin got buckets in transition from Chris James, R.J. Acuna , Gerrit Twitero and Matthew Doege to go on another run, this time 13-0, and put the game away.

James would score eight of the Mats next 13 points, as Seguin would increase the lead to 24 at the end of the third quarter, and push it to 25 several times in the final stanza.

“That run was more of the same story,” Nowlin said. “At halftime, we told the guys it doesn’t matter who the opponent is, we’ve got to come out and play our style, force our brand on them as we prepare for our district games.”

Twitero got six points in a row off of turnovers for the Mats during the second quarter, and led the team in scoring on the night with 21.

“It’s just all defense,” Nowlin said. “We don’t care who scores the basketball, it’s a team deal. The defense is going to lead to easy offense, and whoever the beneficiary is doesn’t really matter to us.”

The Mats leading scorer for the year, James, had a slow first half but came on strong in the second, especially in the half court set, when the Mats didn’t have the fast break going. The Seguin guard broke down players off the dribble and drove to the basket when the Mats were running the half court offense, getting 10 of his 13 points during the game.

“He was in a little bit of a slump there and coach and I talked to him at the half,” Nowlin said. “We told him we had faith in him and to get back to his style of basketball.”

Seguin’s tallest player, Doege, (6-foot-7) had a breakout game, blocking and influencing shots on the defensive end of the floor, and getting some of those easy buckets off of transition on his way to 11 points on the night.

“He played big under the rim, protecting it and blocking shots,” Nowlin said. “We were telling him to get his hands straight up, make these guys shoot over you. If you can high point the ball great, if not, then we’ll play the rebound and run the other way.”

The Mats played on Saturday with the chance to go on to the Silver or Gold Bracket final.

Catch up with that action, and with the other teams in the area, online Monday at www.seguingazette.com.