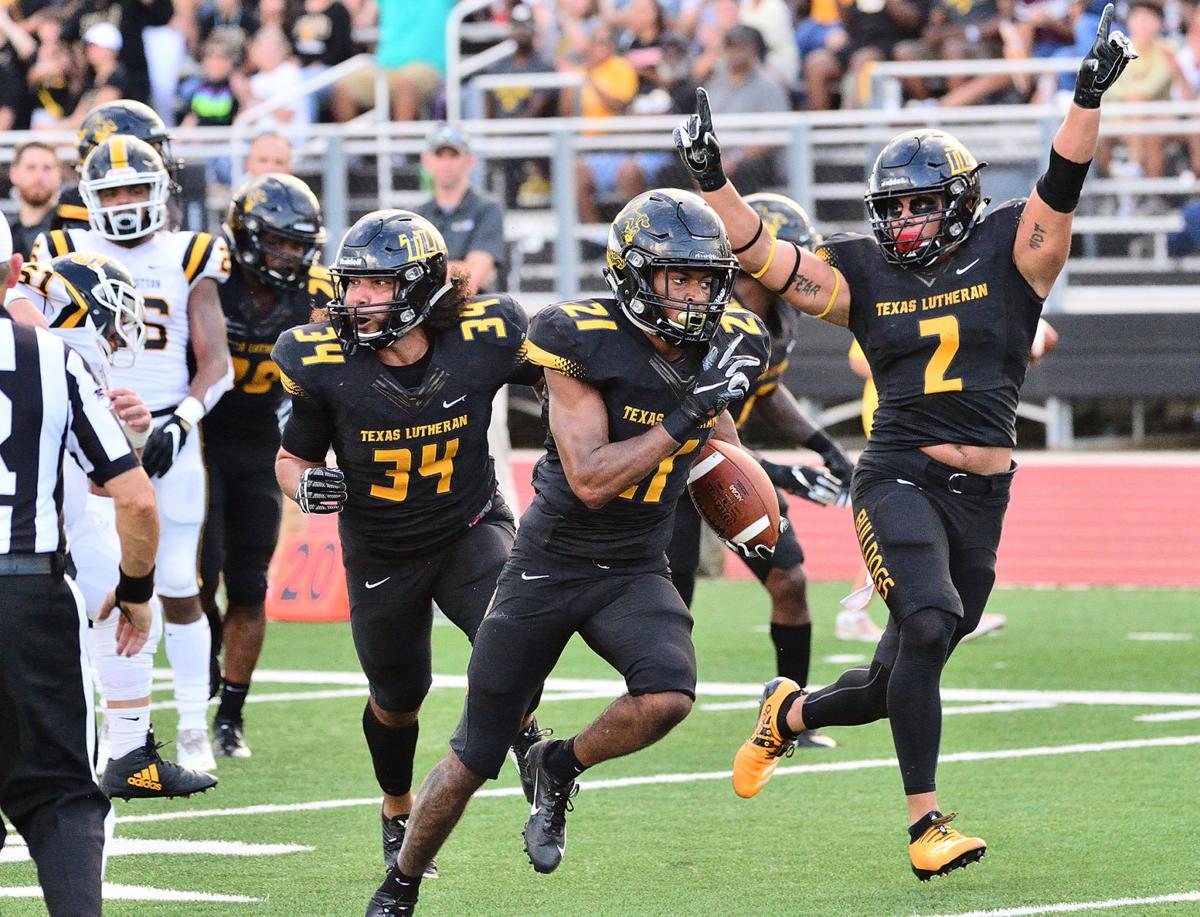 TLU's Manny Longoria (2) escorts his teammate into the end zone as the Bulldogs' defense gets a score against Southwestern last fall. Longoria has made the decision to forego a tryout to turn professional and go into coaching. 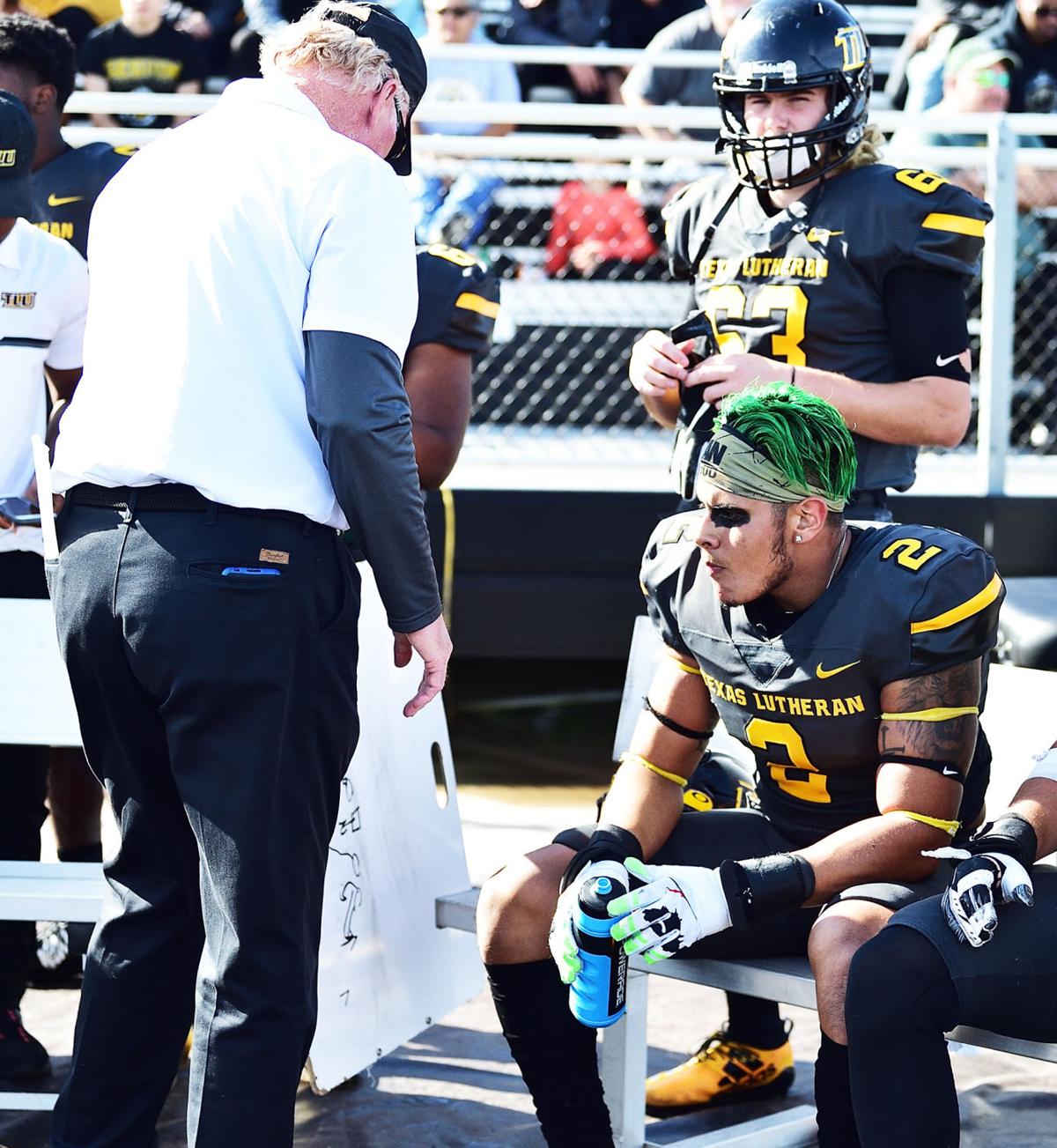 Navarro graduate and TLU defensive end Manny Longoria sits on the sidelines at a TLU game in November. Longoria was an All-American selection for the Bulldogs in his senior season at TLU.

TLU's Manny Longoria (2) escorts his teammate into the end zone as the Bulldogs' defense gets a score against Southwestern last fall. Longoria has made the decision to forego a tryout to turn professional and go into coaching.

Navarro graduate and TLU defensive end Manny Longoria sits on the sidelines at a TLU game in November. Longoria was an All-American selection for the Bulldogs in his senior season at TLU.

Try to continue a football career as a player, or give up playing the game that has been his entire life.

He had a chance — at very long odds — to give a professional playing career a shot.

After all, how many NCAA Division III collegiate players actually make it to the NFL?

So Longoria made a decision to pass up on invitations to attend pro days and move on to the next stage of his life.

It was not an easy decision to make, but he is still not done with football.

Longoria was a cornerback at Navarro, but made the move to defensive end at Texas Lutheran.

He worked closely with coach Ricky Matt at TLU. Matt was the defensive coordinator for the Bulldogs for Longoria’s career at the school and recently took the head coaching job at the university.

Matt was the coach that moved Longoria to defensive end for the Bulldogs, a move he wasn’t sure of at first.

“I can remember the day he told me I was going to be a defensive end, I thought he was full of it. I was out of position, I could have been an outside linebacker or a DIII safety, but I did what I did because my coach gave me a chance,” Longoria said. “He put me in there at fall camp and the rest is history, the awards speak for themselves.”

The move was a good one, as Longoria excelled at the position while at the university.

“There were always naysayers, people that thought I wasn’t going to make it,” Longoria said. “Each and every week I worked to prove them wrong.

“I wanted to put icing on the cake and God blessed me with an All-American choice. I really think it was the best one you can get, because it was from the ASC, where all the coaches get to vote on it. Those are the guys that scout to get ready for you the next week, the guys that say, ‘How can we stop Manny Longoria?’”

Longoria leaves TLU with two records, the tackles for loss record and the sacks record.

“I’m thankful for TLU and it’s always going to have a special place in my heart,” Longoria said.

He graduates in May with a degree in math education.

Longoria, 21, played his last game for TLU last fall, and became the fifth American Football Coaches Association All-American in school history when he made the second team.

The award was just one of the many accolades from his four years of playing for the Bulldogs, including three American Southwest Conference All-Conference selections and two All-South Region selections.

His ability on the field got him noticed enough to get a couple of invites to combines (tryouts) for the NFL, and to train with players that were trying to make that step.

“I was going to see if I was going to try and go to a pro day or a combine,” Longoria said. ‘I didn’t want to go, get my hopes up, then get disappointed and hate football.

“My family and I spent about a month in prayer over it about the time that Coach (Carl) Gustafson retired. I had asked the Lord for a sign ….  and when Coach Gus stepped down and Coach (Ricky) Matt became the head coach, I saw that it was time to hang it up.

“It was indescribable how I felt at the moment, I felt like God was saying ‘this was it, you wanted a sign on what to do, it’s time to go coach.’”

Gustafson retiring and Matt taking the job helped Longoria to realize that it was time to pursue his true career goal — becoming a coach.

“It was really hard,” Longoria said. “I had never been depressed in my life. But for about two months, I knew what depression was.

“It hit home pretty hard — that there was going to be no next season for me as far as playing.”

When Matt got the job, Longoria knew he wanted to coach with him. He has signed on to become a coach with the Bulldogs next fall.

He hopes to find a graduate assistant position somewhere down the line so he can get his master’s degree.

‘I’ll be able to go get my master’s for free and get that all paid for,” Longoria said. “That’s how coaches do it. One of our old coaches, Cedric Whitaker, coached with us for a few years and moved on to Baylor and HBU (Houston Baptist).

“It can be done, moving up to the highest level and I’m shooting for the stars. That’s my plan, to be a college coach and maybe one day coach high school football.”