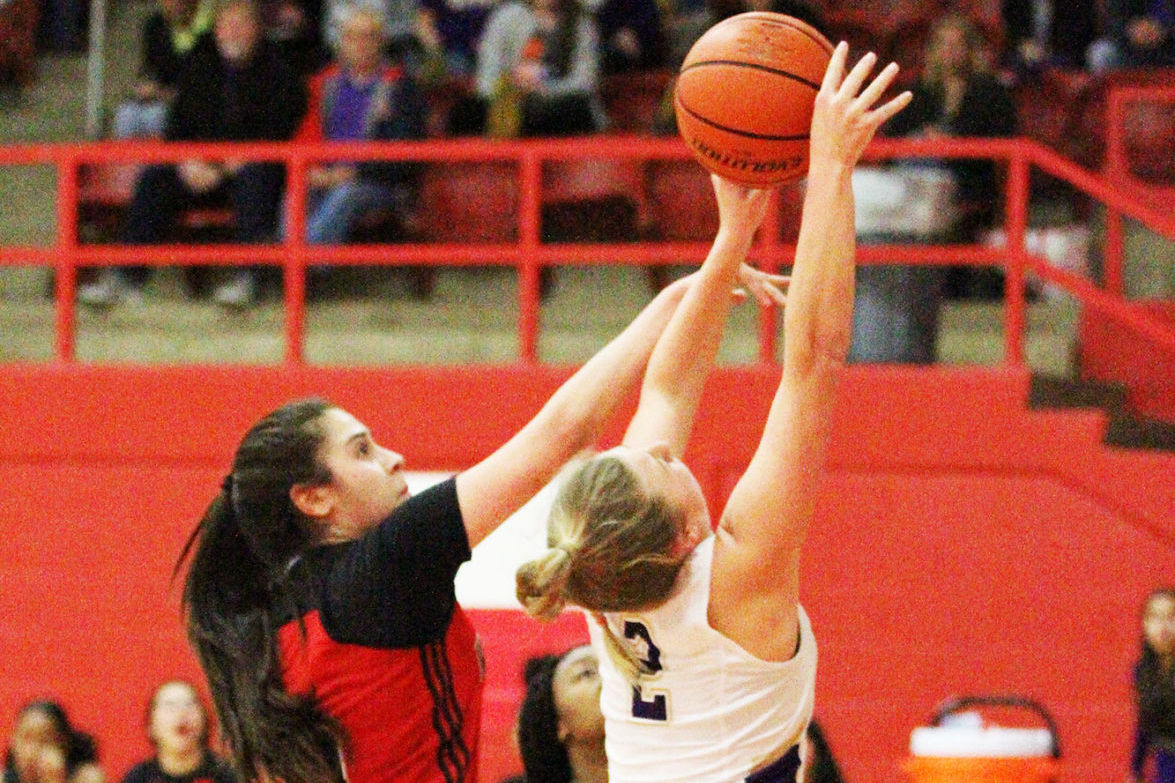 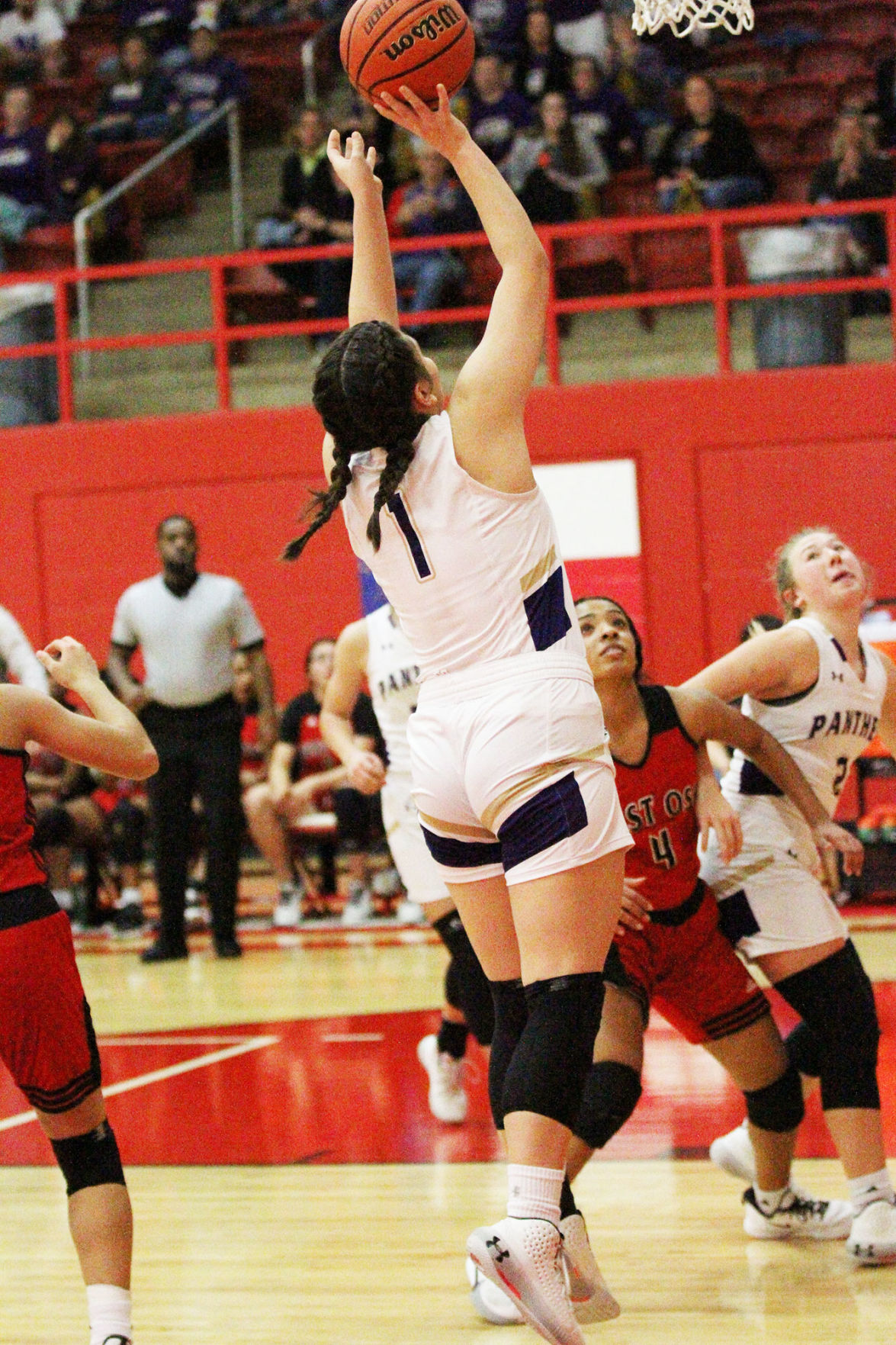 Navarro's Haleigh Ortiz lays it in for two in the Panthers' season-ending loss to CC West Oso on Tuesday, Feb. 26, 2020. The Panthers three-point attempt to tie at the buzzer was ruled a two-pointer in the 56-55 loss. 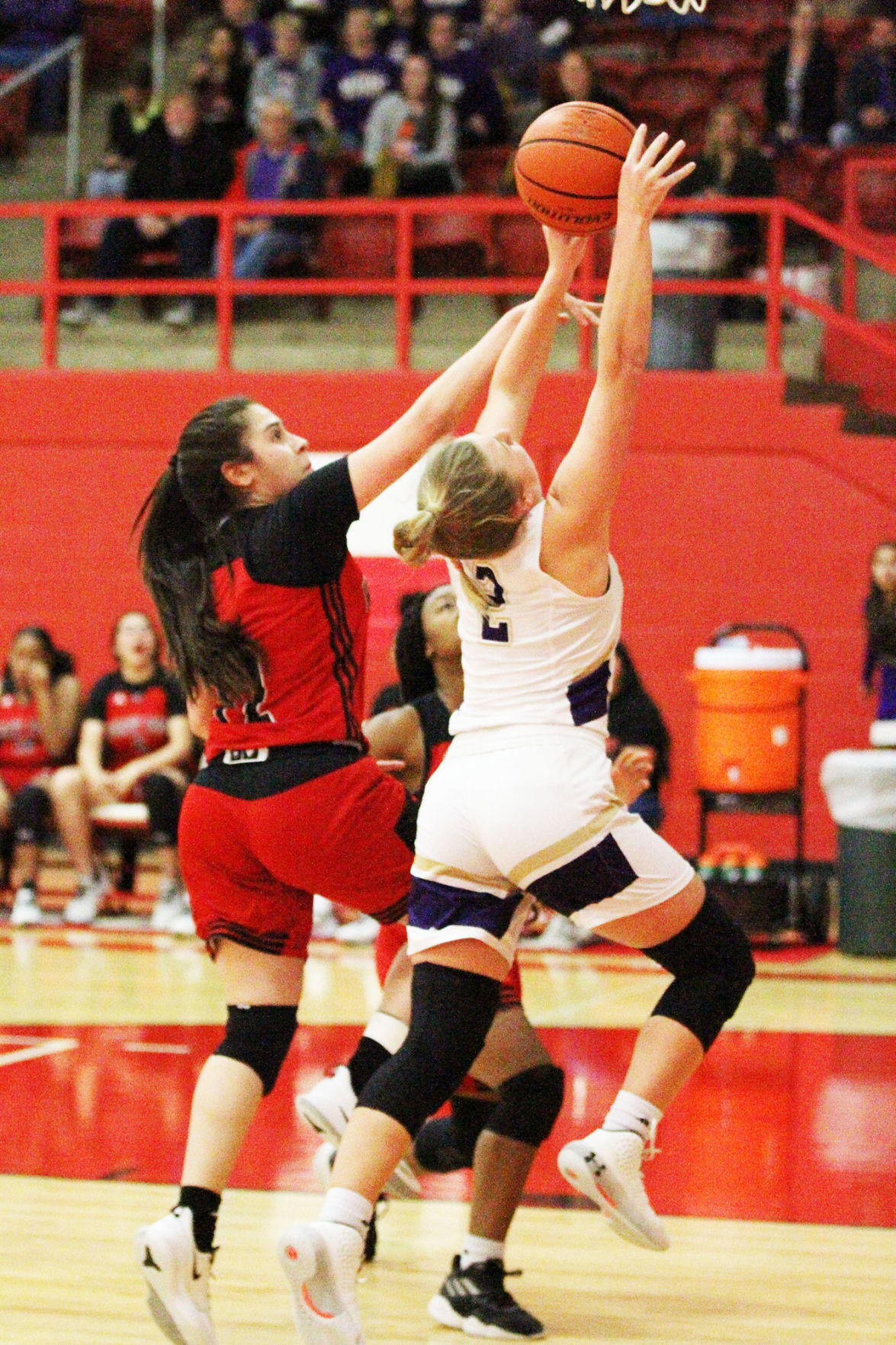 Navarro's Haleigh Ortiz lays it in for two in the Panthers' season-ending loss to CC West Oso on Tuesday, Feb. 26, 2020. The Panthers three-point attempt to tie at the buzzer was ruled a two-pointer in the 56-55 loss.

JOURDANTON — One toe … or possibly two.

When Navarro’s Berklee Andrews drained an apparent three-point shot at the buzzer to tie the game at 56, the Navarro side of the gym exploded — the crowd expecting overtime in the regional quarterfinal game against Corpus Christi West Oso.

But the realization hit within seconds, when the officials ruled it a two-point shot — and as suddenly as the celebration began, it ended.

As did the Lady Panthers’ season.

Navarro (27-11) came up one point short of forcing overtime to extend the contest, falling to West Oso, 56-55, in a game that was more than worthy of the playoffs.

Andrews’ shot came at the end of a frenetic last four minutes of the contest, as the Lady Panthers held West Oso (24-12) scoreless and fought their way back from a 56-47 deficit.

After a Micayla Hawes’ bucket that cut the lead to seven, Tatum Harborth made a steal at the half court line, dished a pass to a streaking Laylin Sturm, who laid it in and got fouled for the three-point play.

But despite creating numerous turnovers with the half court press, the Panthers could not take advantage of several scoring opportunities and missed their chances to tie the game.

“Opportunities — we didn’t take advantage of some opportunities that we probably needed to,” head coach Darrell Harborth said. “We probably missed too many free throws, we probably turned the ball over too many times.

“Some of that was self-inflicted, some of it was because of West Oso.”

Tatum Harborth got to the free throw line twice on the next two possessions, but struggled to find the range from the line for most of the night, making just one of four attempts on the two trips, and the Panthers still trailed by three, 56-53.

Navarro had two open looks at threes over the last minute of the game, but could not get one to fall for the tie. Tatum Harborth got the first, but it was just a little long.

Navarro forced two turnovers from the Lady Bears over the next minute, but in both cases, turned it right back over to West Oso, not getting a shot attempt.

“We got some turnovers there late, when we had to go back to pressing,” coach Harborth said. “We just couldn’t capitalize at the other end. We had several in and outs, or we just turned right back over to them.”

“Perhaps I should have done it (the press) earlier, but their guard was killing us. As good as our half court defense has been, I felt like they scored on us a few times with us not getting good effort.”

But with 15 seconds left, the Panthers got their best opportunity when they found three-point shooter Sara Benner open on the outside for the tie, but her shot was just a little strong and did not go down.

“It would have been nice to see them go in, but that’s how the game goes.”

The Panthers got one more shot, when West Oso missed two at the free throw line, and in a mad scramble with time running out, Andrews lined up the shot and knocked it down as the buzzer sounded.

But her toe was on the line.

“To get that shot at the end — it was inches from being a three-pointer,” coach Harborth said. “I’m really proud of the girls for the grit they showed by coming back.”

The Panthers struggled from the free throw line most of the game, hitting less then 50% from the charity stripe (11-26).

“In a one-point game you always look at free throws,” coach Harborth said. “I don’t even want to look at it, I know we didn’t shoot it very well.”

The Lady Bears’ three guards put the Panthers up against a team that, for the first time in weeks, matched their overall team speed.

“I knew coming into it that those three guards were probably even a little quicker than us,” Harborth said. “I thought in our post play we were faster, and we probably missed a few opportunities there.”

Coach Harborth will have to wait until next year to reach a milestone in coaching, as the game would have been his 500th win.

For the game, Sturm led the Panthers with 16, while Benner had 13, Haleigh Ortiz had 11 and Andrews had six. Leading scorer Tatum Harborth was held to just one point on the night.

The Marion boys and Navarro boys both fell on Tuesday night in the bi-district round of the playoffs.

The Bulldogs made 13 three-pointers on the night, but it wasn’t enough as they fell to No. 1 seed Blanco in Wimberley, 83-71.

Ryken Autry had 31 on 6-8 shooting from outside the arc, while Zach Goodwin had 14 and Easton Allen, 13. Marion finishes the season 16-19 overall.