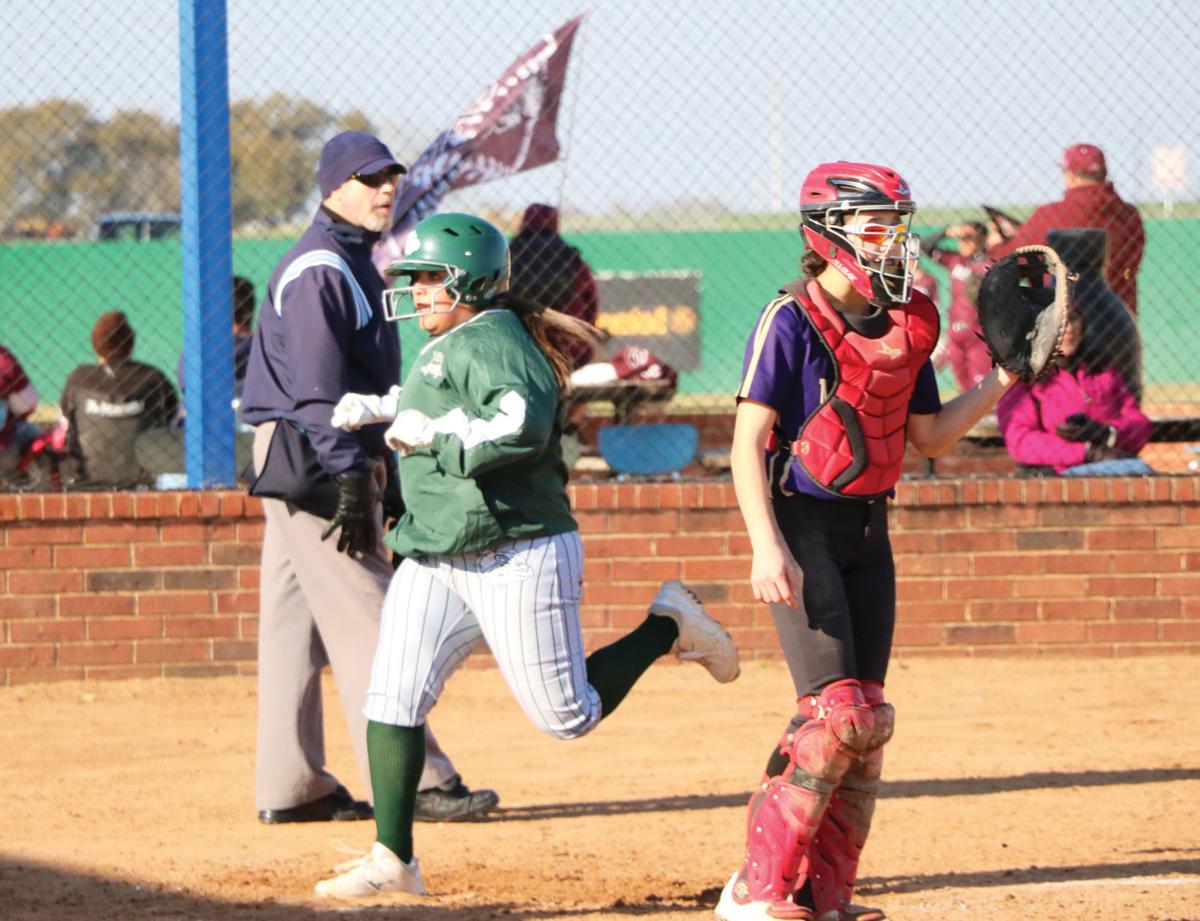 Marion scores in the first inning against Navarro at the Navarro Tournament at Huber Ranch on Friday. Marion beat their cross-county rivals, 5-3. 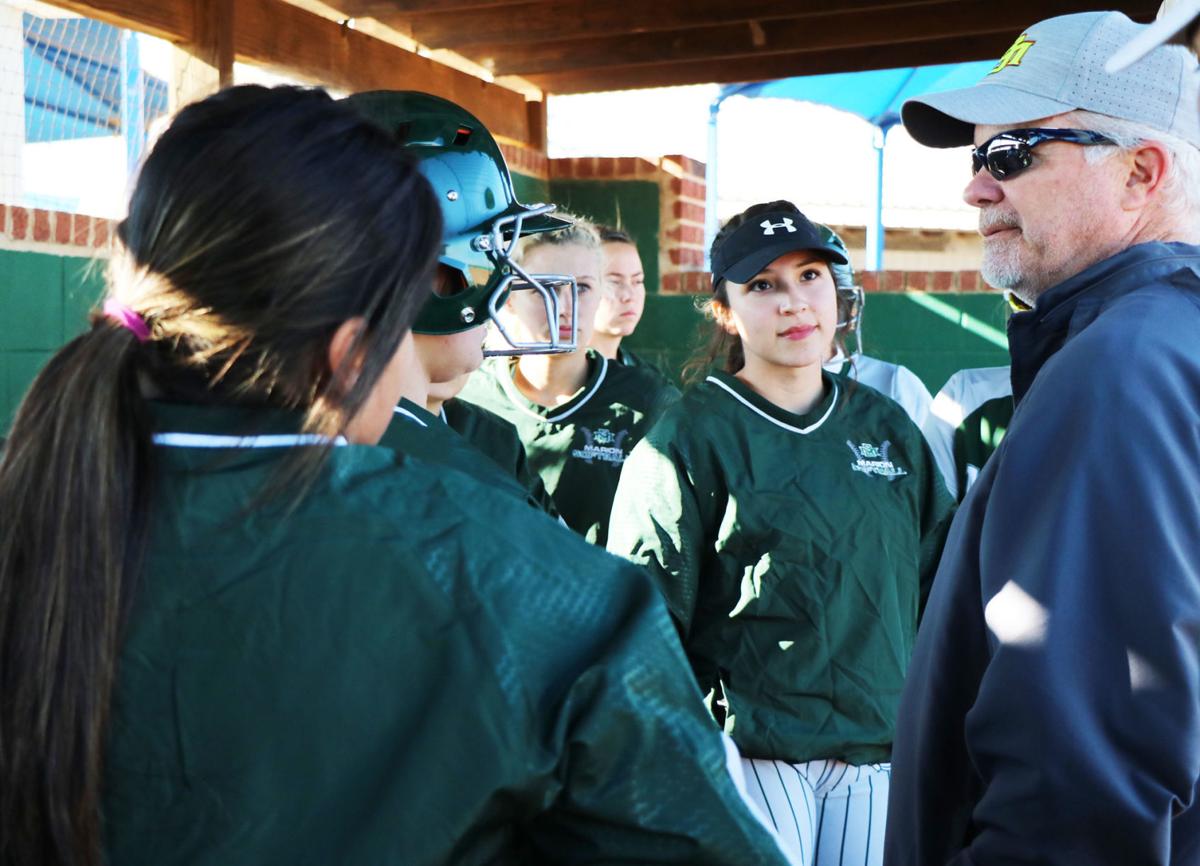 Marion head softball coach Sammy Scribner (right) talks with his team in the dugout at the start of the Bulldogs' game against Navarro at Huber Ranch on Friday,. Feb. 21, 2020.

Marion scores in the first inning against Navarro at the Navarro Tournament at Huber Ranch on Friday. Marion beat their cross-county rivals, 5-3.

Marion head softball coach Sammy Scribner (right) talks with his team in the dugout at the start of the Bulldogs' game against Navarro at Huber Ranch on Friday,. Feb. 21, 2020.

Winter isn’t quite over in Central Texas, but the sounds of spring were in the air on Friday afternoon at Huber Ranch outside of Seguin.

The ping of the aluminum bats on the ball, the cheers of fans watching softball on five different fields — all part of the Navarro Softball Tournament on Friday and Saturday.

A rain out on Thursday and another couple hours of delays on Friday morning had Navarro assistant coach Morgan Cavazos scrambling to accommodate the 19 teams playing in the tournament.

“We’re trying to get some games in … the weather’s been fun, it’s made it pretty interesting here,” Cavazos said. “We’ve got a lot of teams, we’re getting some good games in, some good competition going on, and getting some reps with the bats.

“We had to cancel all the games on Thursday and had about a four-hour delay today.”

Teams were supposed to play six games over the three days, but that was cut back to four with the delays.

Cavazos was handling the duties of running the tournament and coaching the Lady Panthers’ softball team, as head coach Darrell Harborth was busy with his girls basketball team, which was still in the playoffs.

Cavazos and Harborth have basically a new team this year, after last year’s senior-laden squad made it all the way to the regional semifinals before being knocked out by Fredericksburg.

“This year we’re young, we have a lot of freshman, so we’re going with a whole new program,” Cavazos said. “They’ve got some great background, playing softball their whole lives, so they come in knowing the sport and they’re fun to coach — we’ll see how it goes.”

Sydni Stevens, Kassidy Bishop and J.J. Martinez return, and will be joined by Berklee Andrews and Haleigh Ortiz, who will come over from basketball once the Lady Panthers’ basketball season is over.

Marion got their season started against Blanco earlier in the week, but as with Navarro, head coach Sammy Scribner was waiting for the girls from the basketball program to start play with the softball team.

“We didn’t have everybody from basketball,” Scribner said. “We lost that game, but now we’re at full strength. We lost a couple of players from last year. Our catcher (Kyleigh Mulanax) was a big loss, she’s hard to replace.”

The Bulldogs lost just one other senior, but the coach returns eight starters from a year ago, when the Bulldogs were eliminated in the bi-district round of the playoffs.

“I’m hoping that we don’t stop hitting in the playoffs like we did last year,” Scribner said. “We came across a pretty good team, but we just quit hitting the ball. That left a sour taste in our mouths, so we’re ready to go out and redeem ourselves and get a little bit further.”

The Bulldogs rebounded from the opening-season loss to win three games at the Navarro Tourney, tied a fourth, and finished second overall at the tournament.

Marion got the win over Navarro on Friday, shut out El Paso Ysleta and Providence Christian, 11-0 and 6-0, and tied Bandera, 9-9.

“The tournament gets us a lot of reps,” Scribner said. “The girls that came out of basketball have not seen live pitching as of yet, outside of what we’ve thrown as coaches. The more reps you can get the better it is.”

The Lady Mats played two games on Friday at the New Braunfels Canyon tournament, falling to Canyon, 5-2, and Canyon Lake, 6-5.

Seguin had the lead over Canyon Lake after giving up three runs in the first, but came back to score four in the third and one in the fourth to take a 5-3 lead. Canyon Lake got three runs in the top of the fifth to go ahead 6-5 and held the Mats scoreless in the bottom of the inning to secure the win.

The Lady Mats also led Canyon, 2-0, before giving up three in the sixth and two more runs in the seventh inning.

Kevin Duke is the sports editor for the Seguin Gazette. He can be contacted by e-mail at sports@seguingazette.com .