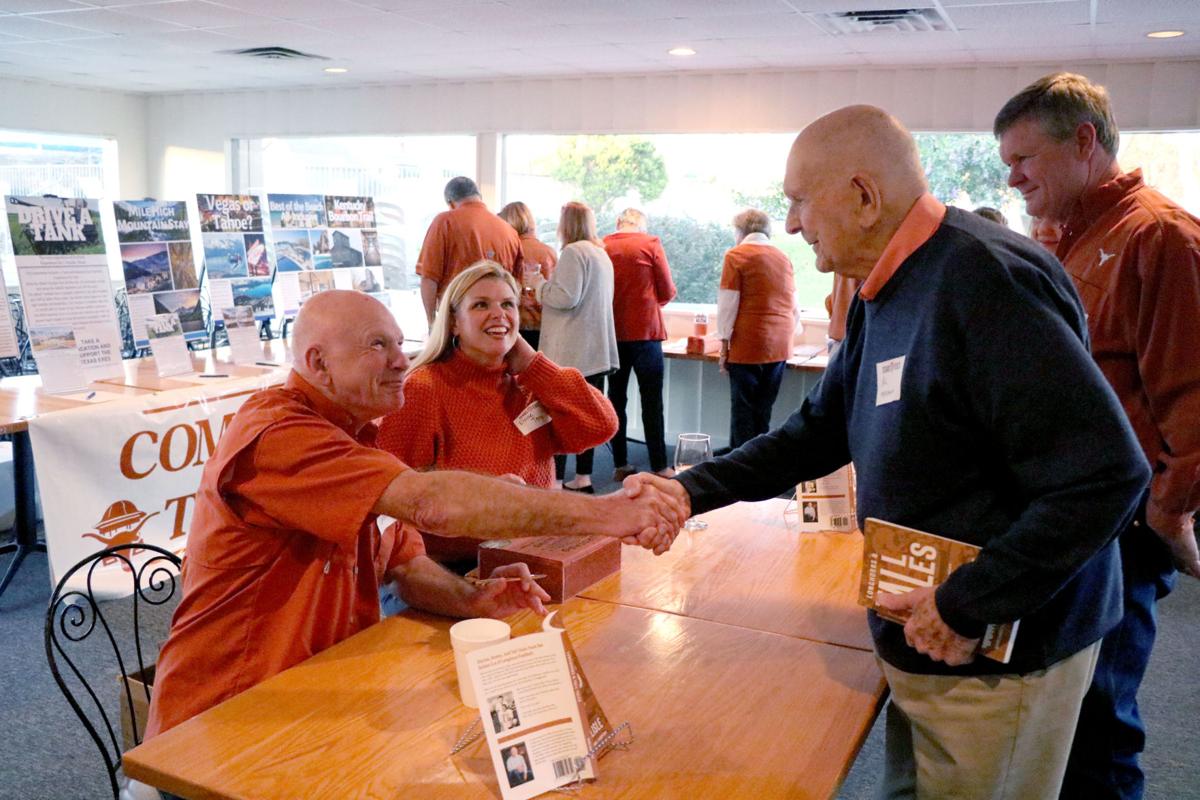 Duke Carlisle (left) shakes hands with a Longhorn enthusiast after signing his book on the Longhorns run to the national titile in 1963. Carlisle was in town for a presentation at the Guadalupe County Texas Exes fundraiser on Thursday, March 5, 2020. 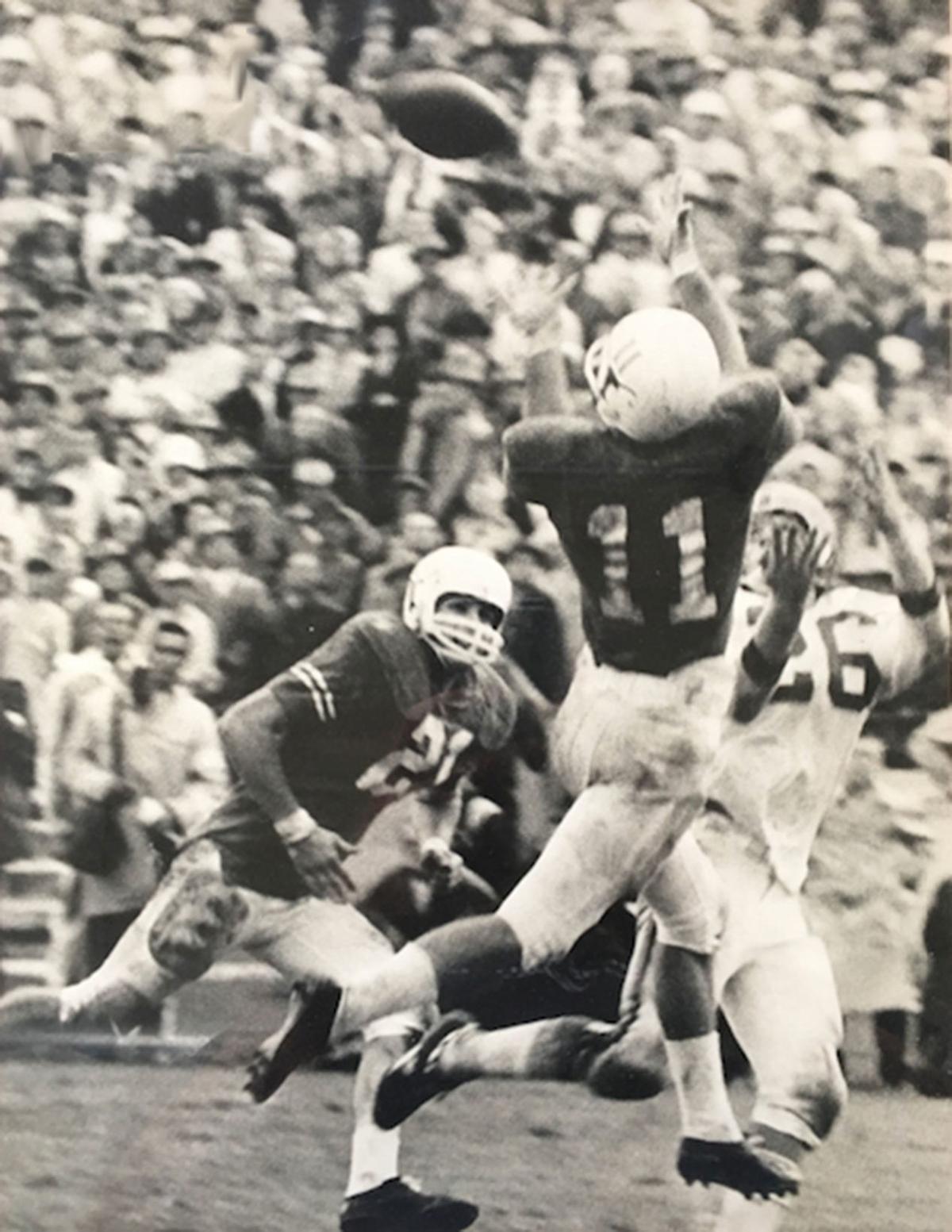 Carlisle (11) makes the game-saving interception in the Horns' game agaisnt Baylor in 1963. The interception came with about 20 seconds left in the 7-0 win. 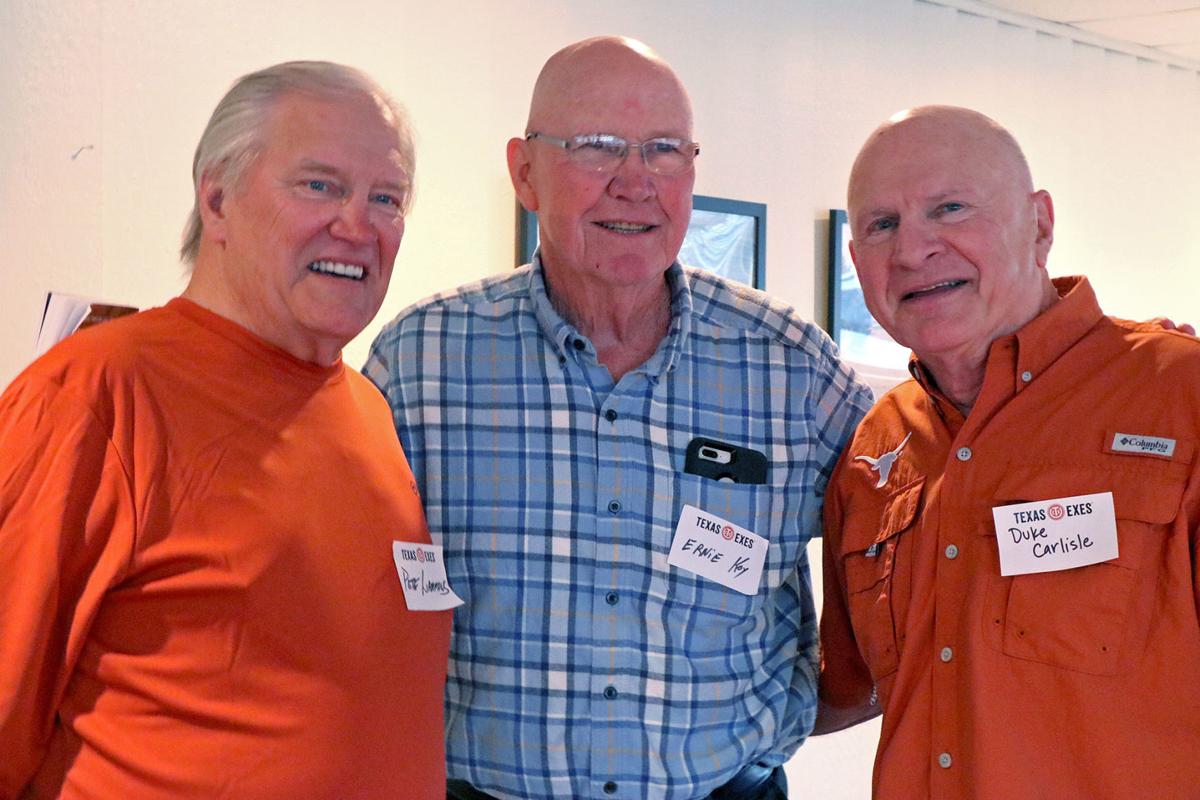 Duke Carlisle (left) shakes hands with a Longhorn enthusiast after signing his book on the Longhorns run to the national titile in 1963. Carlisle was in town for a presentation at the Guadalupe County Texas Exes fundraiser on Thursday, March 5, 2020.

Carlisle (11) makes the game-saving interception in the Horns' game agaisnt Baylor in 1963. The interception came with about 20 seconds left in the 7-0 win.

He and his teammates made the University of Texas football team relevant on the national stage.

And they had help from one of the greatest coaches in Texas football history — Darrell Royal.

Duke Carlisle was the quarterback for the 1963 Texas Longhorns, the first team in University of Texas history to win the national championship.

Several of Carlisle’s teammates came to hear him speak, as he made a presentation telling stories from his recently published book, “Longhorns and Tall Tales.”

Carlisle arrived in Austin as Royal was turning the Longhorns into a national power in the early 1960s.

“I was there at a time when he hadn’t been there very long, and had successfully turned the program around from struggling to huge success,” Carlisle said. “By the end of ’64, coach Royal had probably the most successful program in the country for that five- or six-year period. It was for a number of reasons. He was a successful recruiter, a smart coach, organized and prepared.”

In the 1963 championship season, the Longhorns had several close calls on the way to an undefeated year.

The Longhorns faced off against Roger Staubach and Navy in the Cotton Bowl at the end of the year. Navy was No. 2 and the No. 1 Longhorns beat them to win the national title, 28-6.

“It was the first time since 1945 that a team had played two games the same season that involved No. 1 versus No. 2,” Carlisle said.

“We had some close games — the Aggie game we barely pulled out at the end and the Baylor game was close — that was the only defense I played.”

Carlisle had been a safety on the team in the two years prior to ’63, splitting time at quarterback, but hadn’t played on defense all season until the final series against the Bears. Royal put him in the game at safety and he made the key play to preserve the undefeated season, picking off a pass in the end zone with around 20 seconds left in the game.

The national championship came after the Longhorns got close in 1961, but suffered a late season upset to TCU when they were 8-0 and ranked first in the country.

“We were sick (about the upset),” Carlisle said. “The guys in my class, that was our motto from then on, ‘Remember ’61.’  No matter who it is, you’ve got to be prepared and ready to play.”

Both played for the Longhorns in the early ’60s, and recalled the championship season with Carlisle under center.

“I came to visit and support our boy, Duke Carlisle,” Lammons, a seven-year NFL tight end with the New York Jets, said.

Lammons recalled his favorite memory of Carlisle playing that season, the 7-0 win over the Baylor Bears.

“I guess the coolest thing was when he intercepted the ball at Baylor,” Lammons said. “We were all happy with that.”

The Longhorns had one-possession wins over Arkansas, Rice, SMU, Baylor and a come-from-behind 15-13 win over Texas A&M in the final Southwest Conference game of the season, in which Carlisle scored the winning touchdown with just over a minute left.

“Tommy Wade got us down there and coach put Duke in to score — and we did,” Lammons said. “You have to (win close games) in seasons to be successful, you always have those nail biters.”

Koy played in three successive seasons under Royal, 1962-64, only losing two games in the three years. He laments the game against Arkansas in 1964 when the Longhorns lost by a single point.

“If it weren’t for the one point against Arkansas, we could have had back-to-back national championships,” Koy said.

Koy recalled that Carlisle seemed to rise to the occasion when it was needed.

“It was Duke’s ability to make the big play,” Coy said. “Pete already talked about the Baylor game, when he got put in after he had not been playing defense all year. He was kind of an easy-going person, but his leadership was appreciated too.”

The dinner where the former teammates reunited is an annual event to raise money for scholarships for high schoolers that are going to the University of Texas.

“We are here to raise money for incoming freshman that go to the University of Texas, that are from Guadalupe County,” Ann Terry, chapter president of the Guadalupe County chapter of Texas Exes, said. “We award around three scholarships to those that apply.”

The scholarships are available to students at Lifegate, Seguin, Navarro, Marion and Steele high schools. The application process has begun for next fall, with about 15 applicants so far.

“Each year we try to have an interesting speaker,” Terry said, “and it seems that most people like the sports area, but it isn’t limited to that.”

The Guadalupe County and Comal County chapters held the event together, as they do every year, to draw more Texas graduates from the area.

The dinner, raffle prizes and live and silent auctions generated money for the scholarships, typically about $750 each.

The most significant prize perhaps was a 1963 National Championship commemorative football that Carlisle signed for the event.