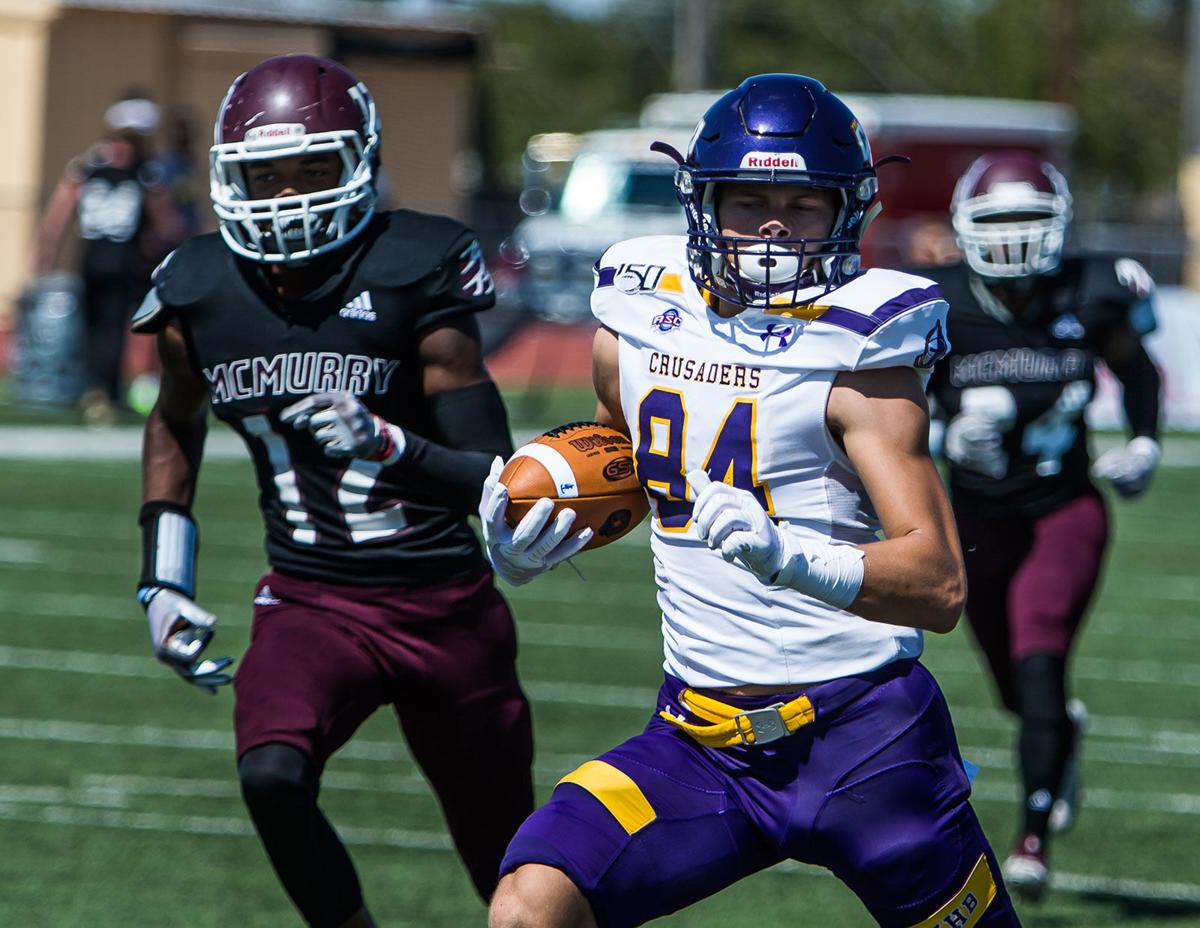 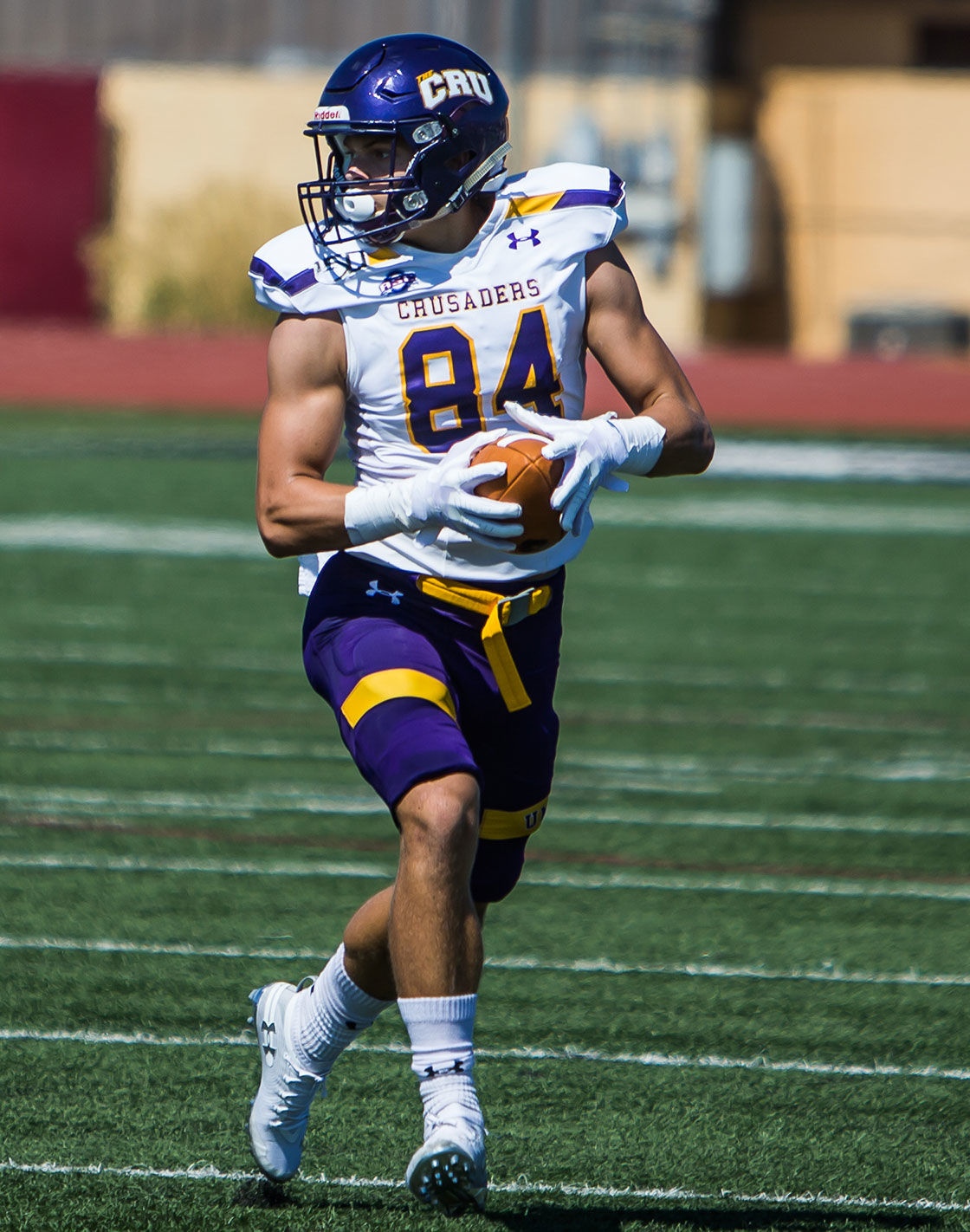 Seguin's Hayde Haas had a game and season to remember for the University of Mary Hardin-Baylor as the Crusaders faced McMurry University in Abilene in October. 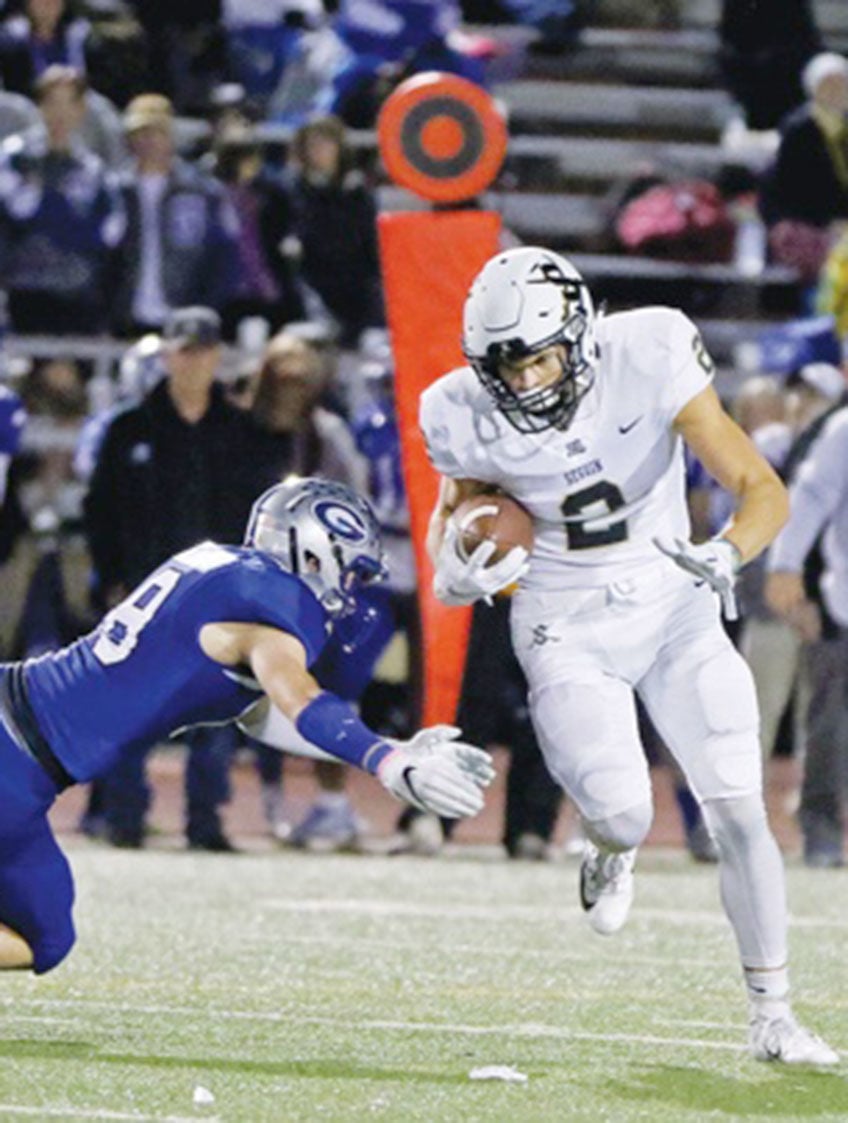 Haas played receiver for Seguin during the 2018 sesaon, when he had 1,005 yards receiving and 12 touchdowns in his senior year.

Seguin's Hayde Haas had a game and season to remember for the University of Mary Hardin-Baylor as the Crusaders faced McMurry University in Abilene in October.

Haas played receiver for Seguin during the 2018 sesaon, when he had 1,005 yards receiving and 12 touchdowns in his senior year.

First, Seguin’s Hayden Haas had to make the team.

Then, as a freshman, Haas had to play a back-up role as a second-string receiver for one of the top NCAA Division III schools in the country.

With both of those requirements met, the 2018 Seguin graduate was set to play his first year for the University of Mary-Hardin Baylor Crusaders, on a team that had won two of the last three Division III national championships.

And in a game at McMurry University in Abilene last October, Haas took full advantage of his opportunity.

The Crusaders were pounding McMurry, up 38-0 in the second quarter, when Haas got the call to play.

He responded with a record-setting performance, catching three balls in the contest, with all three going for touchdowns. The three-touchdown game tied the all-time record for touchdown catches in a game at the university.

Not bad for a second-string, freshman receiver in his first year of college ball.

Haas made the decision to go to UMHB after a visit last spring, at least partially because of the winning tradition at the school.

“I really loved the atmosphere at the school,” Haas, 18, said. “I learned that they were the DIII national champions two out of the last three years and that really intrigued me — I wanted to win.”

Haas hadn’t committed to play anywhere, this despite a senior season at Seguin that saw him catch 12 touchdowns and gain over 1,000 yards receiving, and make All-District, All-Area and 5A All-State teams.

A recruiting coordinator for the university contacted Haas in March of last year, leading to the visit and his decision to go there. He received an academic scholarship to attend the university.

Reporting to practice last August, Haas had a big mountain to climb to make the varsity team.

“The first day I got there, there were about 200 guys,” Haas said. “They bring in a lot of guys so they can get the best of the best. I worked my butt off, beat out a whole bunch of freshmen and got put with the varsity. I was one of two freshmen (receivers) to make the varsity.”

The level of competition to accomplish that goal was formidable, he said.

“It’s a whole other caliber of athlete, going from high school to college,” Haas said. “It’s a whole different ball game when you’re going up against guys bigger than you, faster and stronger. You just really have to push yourself.”

Haas saw playing time in every game with UMHB, but much of it was in games that the 12-1 Crusaders had blown out their opponents.

“I started on punt return,” haas said. “But I saw time at receiver every game because almost every single game was a blowout.”

The game against McMurry was special for the freshman.

“It was the first game I got more than one ball thrown to me,” Haas said. “It was near the end of the second quarter that I got my first college touchdown.”

Haas turned a 10-yard slant into a 38-yard touchdown catch and run for the score. He scored again in the third on the exact same play, this time rumbling for a 53-yard score.

A fade pattern for a 20-yard score came late in the contest, giving the freshman the tie for the record.

“It was a really neat experience,” Haas said.

Most of the games he came into were already decided, so the Crusaders didn’t throw the ball that much when he was in. He ended the season with five catches for 198 yards (a 39.6 yard average per catch) and the three touchdowns.

Haas saw some playing time against his hometown school, Texas Lutheran, which was odd after he had rooted for the Bulldogs growing up in Seguin.

“It was kind of weird, but I wanted to beat them really bad,” he said. “A lot of my family went to the game so it was good to see all of them,. but it was fun because it was the conference championship game this season.”

UMHB beat the Bulldogs 41-3 to continue their unbeaten (at that point) season.

Playing football at a school that has established itself as a winner year in and year out meant Haas had to step up his game.

“You have to have a special mindset when you are around that group of guys, you don’t really have a choice,” Haas said. “The way they work, working toward one goal every day, you can’t help but follow that, follow that lead.

“It’s really an awesome program, that’s why they are so good every year. They’re not only committed to that goal, but to one another.”

The Crusaders were ranked No. 2 in the country for most of the season, won the conference title and two playoff games, before falling to eventual national runner-up, Wisconsin-Whitewater.

“The whole experience of being in the playoffs was really special to me,” Haas said. “Going to Seguin, we didn’t really do much until coach Bush got there and we made the playoffs for the first time in my senior year.

“We lost in the first round, so being able to win a playoff game in college was super special to me, because it was something I had never done in my life.”

Haas plans on returning to the Crusaders for his sophomore season next year, with the possibility of starting, as the receiver ahead of him on the depth chart is graduating in the spring.

“I’ll be going for the offseason (workouts),” Haas said. “I have a good chance (to start), but I know I’ll have to work my butt off, because there will be a lot of new guys coming in.”