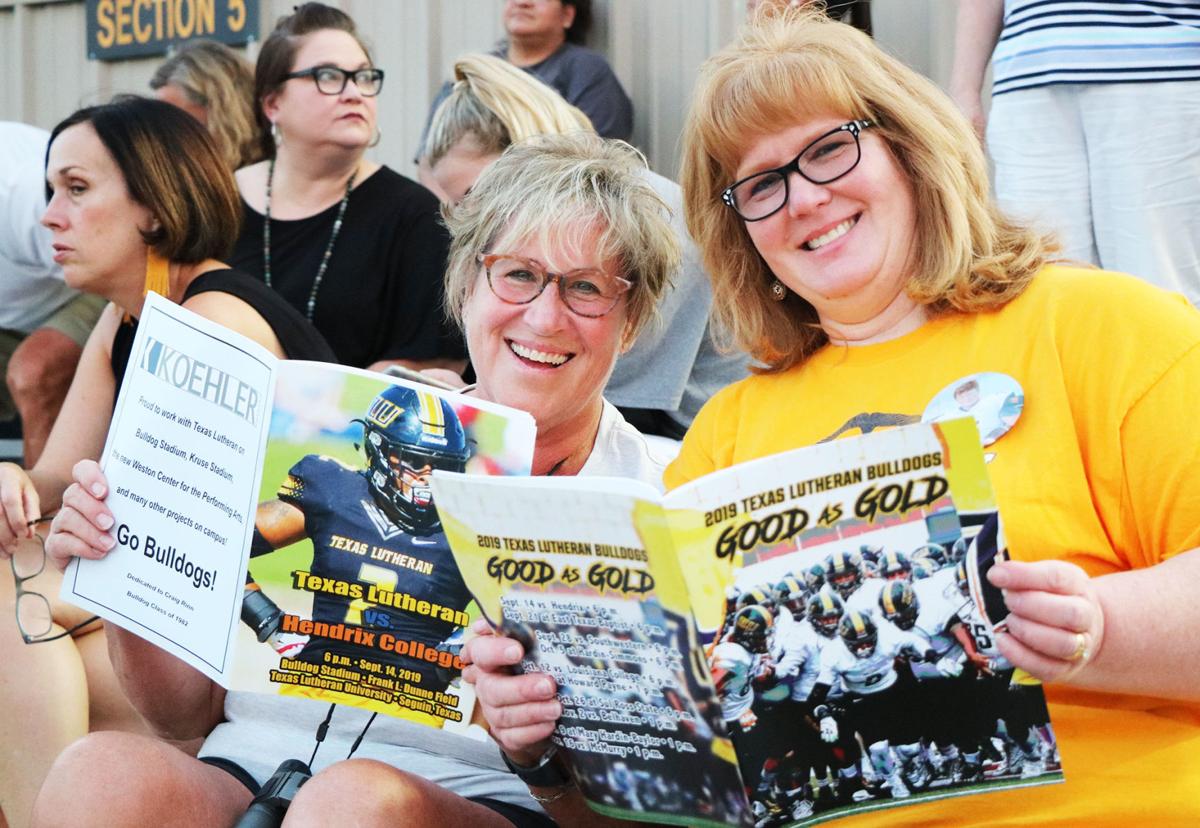 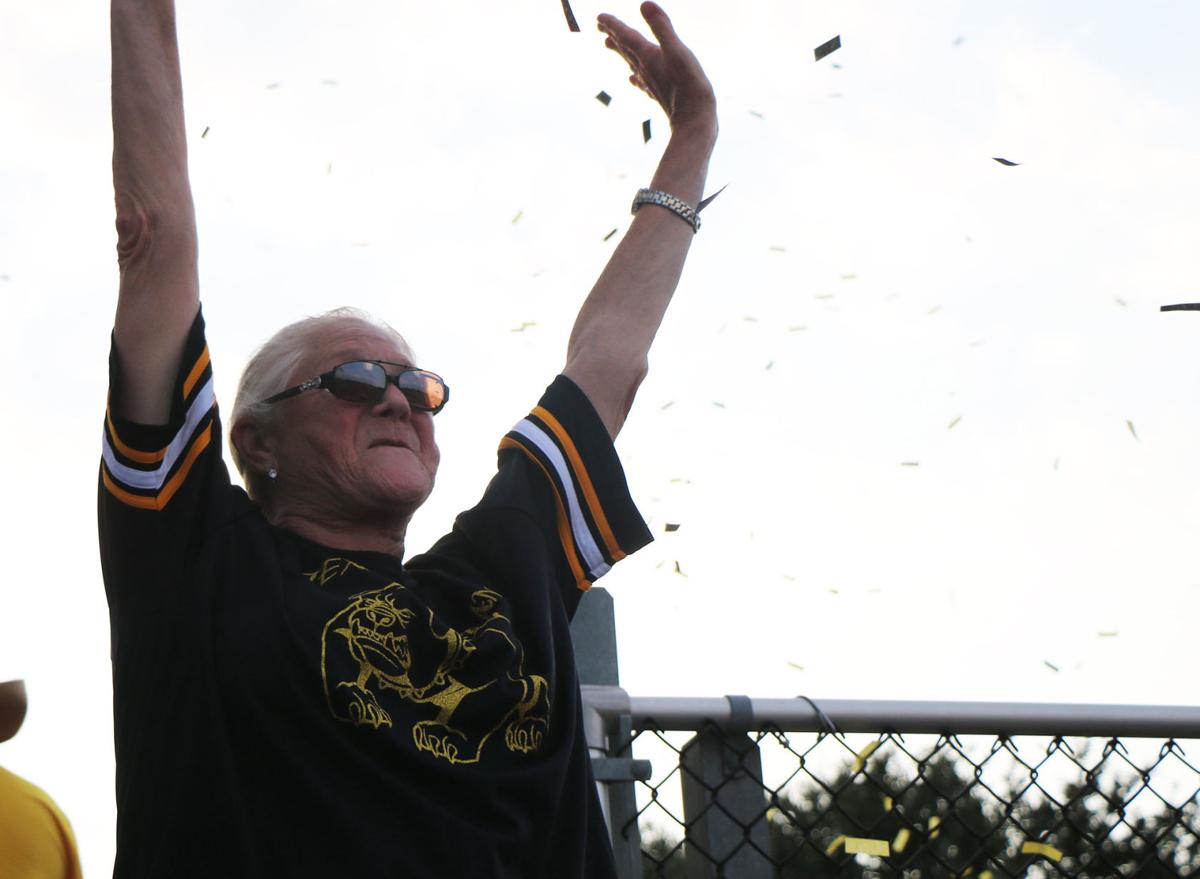 Kathy Long signals touchdown as the confetti flies around here in the stands at the TLU home opener on Sept. 14, 2019. Long has not missed a home game since she began working at the university four years ago. 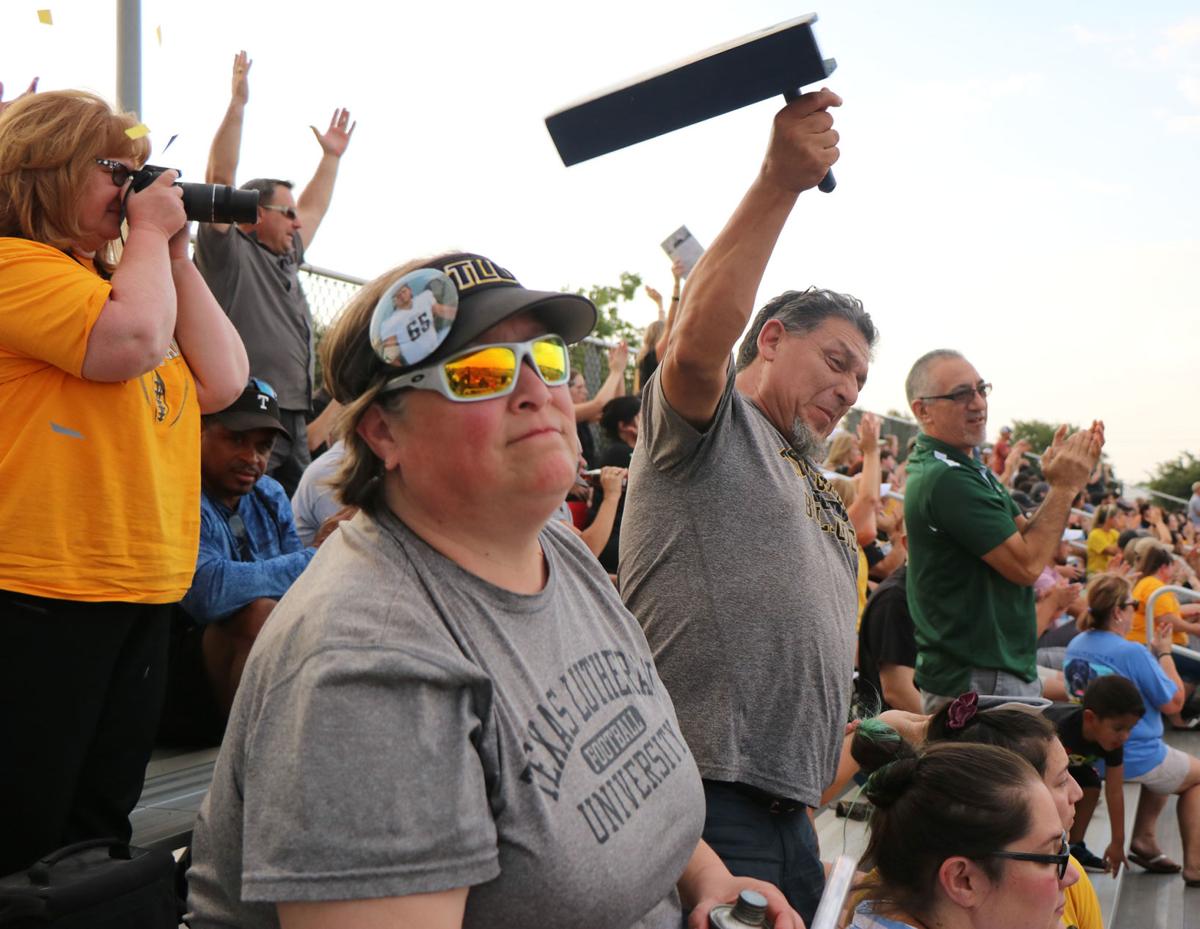 Fans in the stands at the Texas Lutheran football game cheer for a touchdown on Saturday, Sept. 14, 2019. The stands were filled to capacity for TLU's home opener against Hendrix College.

Kathy Long signals touchdown as the confetti flies around here in the stands at the TLU home opener on Sept. 14, 2019. Long has not missed a home game since she began working at the university four years ago.

Fans in the stands at the Texas Lutheran football game cheer for a touchdown on Saturday, Sept. 14, 2019. The stands were filled to capacity for TLU's home opener against Hendrix College.

I went to my first TLU game a couple of weeks back and got treated to a prime example of small town, small college football at its finest.

I’ve covered universities similar in size before and larger, from where I graduated college, Midwestern State in Wichita Falls, to my gig in Durant, Oklahoma, where I covered Southeastern Oklahoma State.

I’ve also covered games at larger programs like the University of Arizona and at Oregon State.

Of course the fans were great at all those schools, but I was pretty impressed with the packed stands — and the fans — at Texas Lutheran.

They were loud, raucous and enthusiastic in their support of the Bulldogs.

I was curious about why they loved their Dogs, so I talked to a few of them, and found a rabid TLU fan base right here in Seguin.

At the top of the stairs leading to the press box, the loudest fan at the stadium took her regular spot for all the TLU home games.

Her name is Kathy Long, known to the players at TLU as “Ms. Kathy” or simply “Mom.”

Ms. Kathy works in the dining hall at TLU, in the salad bar, and feeds the team five days a week as she has for four years now.

During the course of the game, as I sat a couple of rows from her in the stands, Ms. Kathy’s voice could be heard over everyone else at the game.

She led the “defense, clap, clap, defense” chant, she screamed at the officials, she called the players by their first names when they did something good — or not so good.

“Don’t you let him get that first down! If you have to, hit him harder! You got to hold your blocks guys!” she yelled at various times during the contest.

She hasn’t missed a home game in four years, one fan telling me, “She’s here all the time, we all know Ms. Kathy.”

“All the football players call me ‘Ms. Kathy’ or ‘mama,’” Long said. ‘This is my fourth year, all the seniors, I started with them their freshman year — these are all my babies.”

She’s lived in Seguin since 1995, but only started attending the games when she took the job at the university.

But her football roots run deep, she had three sons that played football at Industrial High School in Vanderbilt.

“My two oldest sons were linebackers and my youngest one was a running back,” Long said. “I’ve been a football mama for a long time.

“I’m on tape — in their football game films you can hear me yelling — the coaches would say “Oh, we know who that is.”

She’s become somewhat of a de facto coach for the players on the team.

“I watch them and if I see them do something out of line, I always tell them the next Monday,” Long said.

She’s a regular at the end of the games, standing in the line on the field as the players come off the field.

“When I’m standing down there, win or lose, I’m always so proud of them,” Long said. “They are my boys and I love them all.”

Long was not the only diehard TLU fan at the game, joining what I would estimate to be about 1,500 TLU fans in the stands.

Laurie York is an actual mom of one of the players on the team, senior offensive tackle, Travis York.

Travis played a Seguin High School, so Laurie has been to a ton of football games in Seguin over the last 15 years or more.

York could not tell me how many football games she had been to in Seguin in that time.

“I’m not really sure, I think I’ve been to all of them,” York said when I asked her to put a number on it. “He started to play in peewee, so I’ve been going for several years.”

Her son had the chance to play elsewhere, but chose to play at TLU.

“He had other choices, but this is the one he wanted to go to, he’s always loved TLU,” York said. “We had brought him to games here when he was a kid. He’s excited because he loves the team, loves the sport and loves TLU.”

York has been going to the games at TLU for years now for a number of reasons.

“I like the whole atmosphere,” she said. “The parents and fans — it’s like a family. It’s scaled down, since it’s a D3 school, but the games are very exciting.

“I feel like since we’re from Seguin, I welcome that many more people, because I want them to love Seguin and feel like they are part of a family here.”

Bill Klingemann and his wife, Lainey Joyce-Klingemann, were seated just below the press box and are season ticket holders at TLU.

“I guess I’ve been coming here since I attended TLU,” Bill said. “I graduated in 1974. But it’s nothing compared to some of the people that have followed TLU for 50 years.”

Lainey attended Penn State, so has been to games there.

“She’s from where football is really king,” Bill said. “At least Penn State thinks they’re the king of football.”

“There’s lot of college football tradition there,” Lainey said. “But TLU has a lot of tradition here too, it’s a nice environment.”

Bill is a big football fan, and noted the quality of the play at TLU. He and Lainey are also season ticket holders at Seguin High School.

“They’re very competitive,” he said. “TLU always puts a good team on the field. We know some of the kids because they played at Seguin. But even if we don’t know them, we get attached to them because we get to watch them play for a while.”

They are regulars at the games simply because of a love for the sport, Lainey said.

“We love football,” she said. “We left the house today watching football, came here to watch football — pretty much if there’s a game on, we’re watching it.”