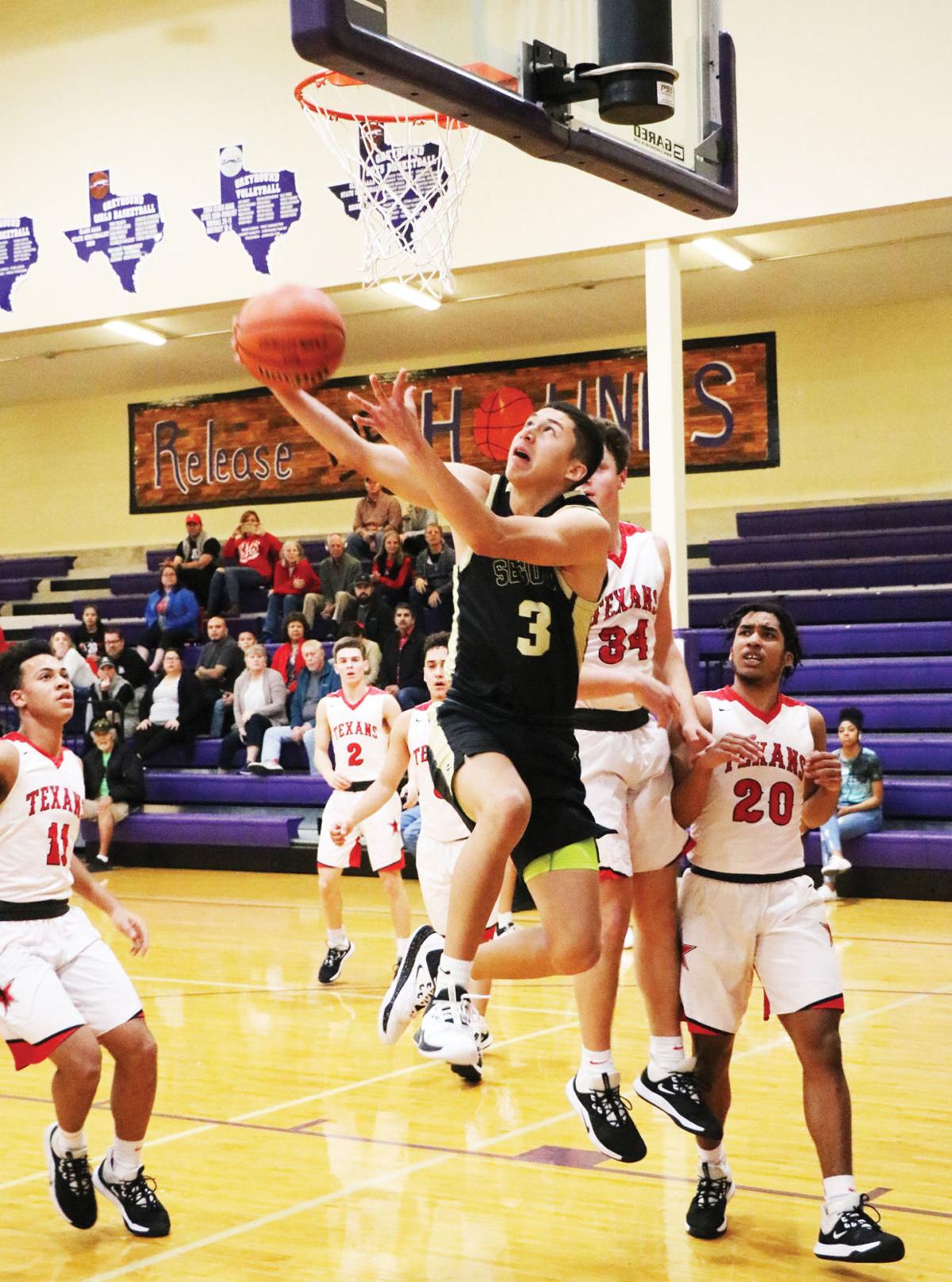 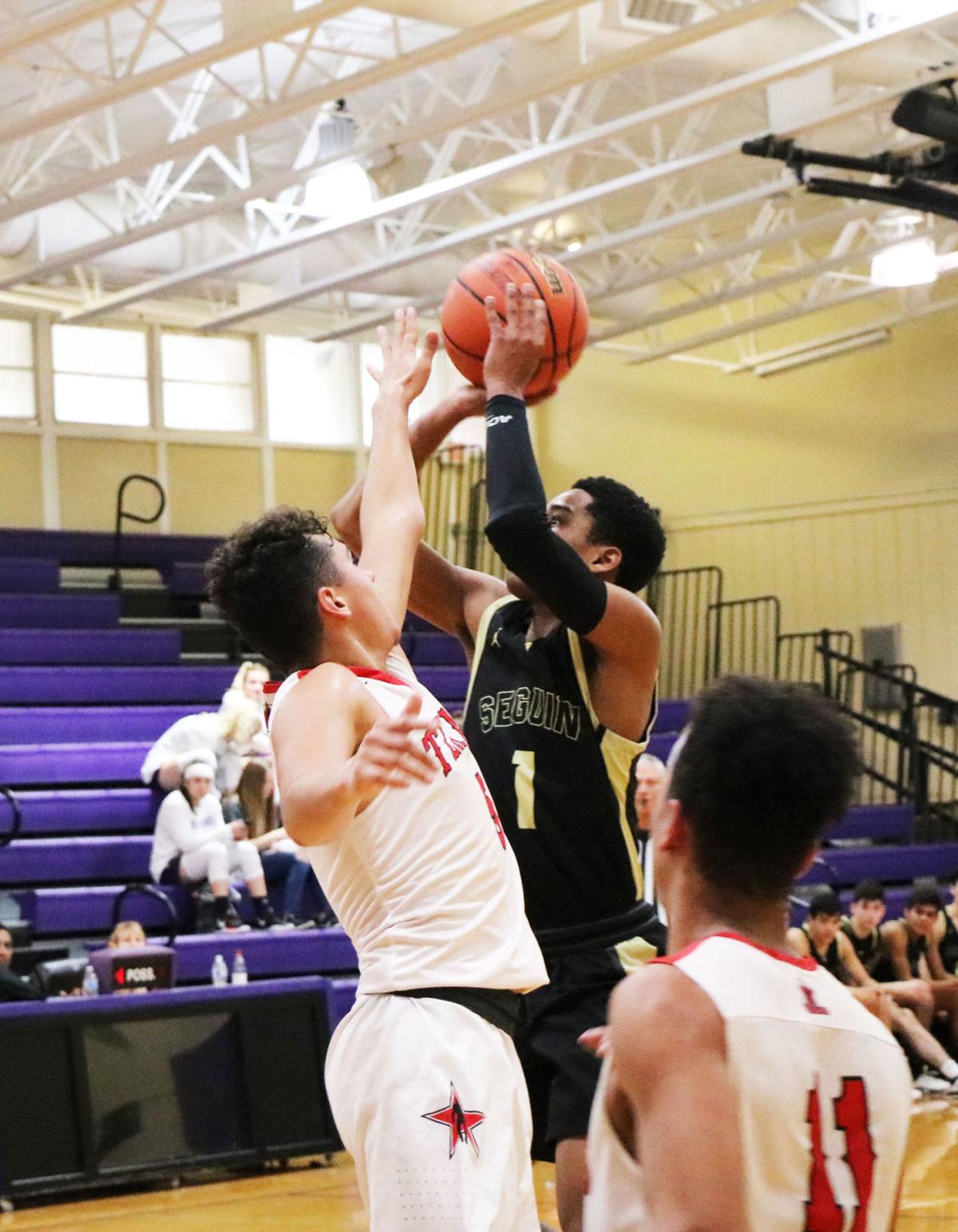 Seguin's Chris James goes up for a contested shot in the Mat' loss to Corpus Christi Ray on Friday, Dec. 28, 2019. James had 22 points in the loss and 38 in a win over Floresville earlier at the Boerne tournament.

Seguin's Chris James goes up for a contested shot in the Mat' loss to Corpus Christi Ray on Friday, Dec. 28, 2019. James had 22 points in the loss and 38 in a win over Floresville earlier at the Boerne tournament.

But that was exactly the situation Friday in Boerne for the Seguin boys basketball team.

The Matadors played Floresville at 9 a.m. and then had a quick turnaround for game two, a 12 p.m. contest with Corpus Christi Ray.

Guard Chris James had a career and season high for the Mats against Floresville, draining nine three’s on his way to 38 points, and the Mats held off a Floresville rally to win 79-75.

Two hours after the end of that game, the Mats were on the floor again, and the two games on top of each other had an effect in the second half, as Seguin couldn’t hold on to a second quarter lead and fell, 66-58.

“I thought the kids played really hard,’ head coach Dwayne Gerlich said after the Ray game. “They gave it everything they had, but this was our second game in three hours and they got tired a little bit.

“I could tell in the second half we had no legs, so everything was short on our shots. I thought we executed plays well, but the ball didn’t go in.”

The Mats took the largest lead of the game in the second quarter, using a 12-2 run to build a 30-23 lead. R.J. Acuna made two three’s, Joseph Vela had a bucket and James got a lay-in and two free throws during the run.

But the Texans came right back with an 8-3 run of their own over the last two minutes of the half to close to within two at 33-31.

The legs started to leave the Mats in the second half and Seguin went cold from the field, not getting their first bucket of the third quarter until there was just 5:45 left in the period.

Still, a bucket and free throw from Vela got Seguin back up by one with 2:40 left in the third, 42-41. But that would be the Mats last lead in the contest.

Gerrit Twitero came to life in the fourth, getting a three, a bucket at the rim and two free throws to cut the lead to six, and a three by James cut it to five (63-58), with 1:11 left. Seguin had their chances over the last minute, getting a turnover from the press, but couldn’t capitalize.

“We stole a ball, but missed the lay-up,” Gerlich said. “It was just a few things here and there — it could have easily happened.

“We executed a couple of plays well, but the ball just didn’t go in. Sometimes that happens, especially in the second game of a tournament.”

Seguin built a 14-point lead in the morning game against Floresville, mostly behind the hot shooting of James. The senior guard made his nine three-pointers from all around the arc, but it was a quiet 38 points, garlic said.

“He kind of carried us there for a while,” Gerlich said. “Our shots were going in that game. It was a phenomenal effort, but he wasn’t really trying to score that many points.

“I really didn’t know at the end of the game he had scored that many. He was in the flow of the game and did some great things.”

Seguin outscored Floresville 42-33 in the first half and built the lead to as many as 14 in the second half, before Floresville actually cut it to one in the fourth quarter.

“They whittled away at it and cut it to one,” Gerlich said. “We hit a big three to go back up by four, they scored, but we did a good job late of holding the ball and making them foul us.”

Seguin got two free throws with 6.7 seconds left to ice the win.

James led all scorers against Floresville with the 38 points, while Vela had 14 and Twitero nine. James had 22 in the loss to Ray, with Acuna getting 11 on three made three’s, and Twitero checking in again with nine.

The coach is using the tournament to prep the Mats for the next part of the District 26-5A schedule. The Mats have played three of the top teams in the district in the first three games and have started the season 0-3 in district.

“We’re trying to get back into things. We have a bye on Tuesday so our next district game will be on Friday against McCollum at home.”

The Mats played Boerne and Pleasanton on Saturday in the final two games of the tournament.