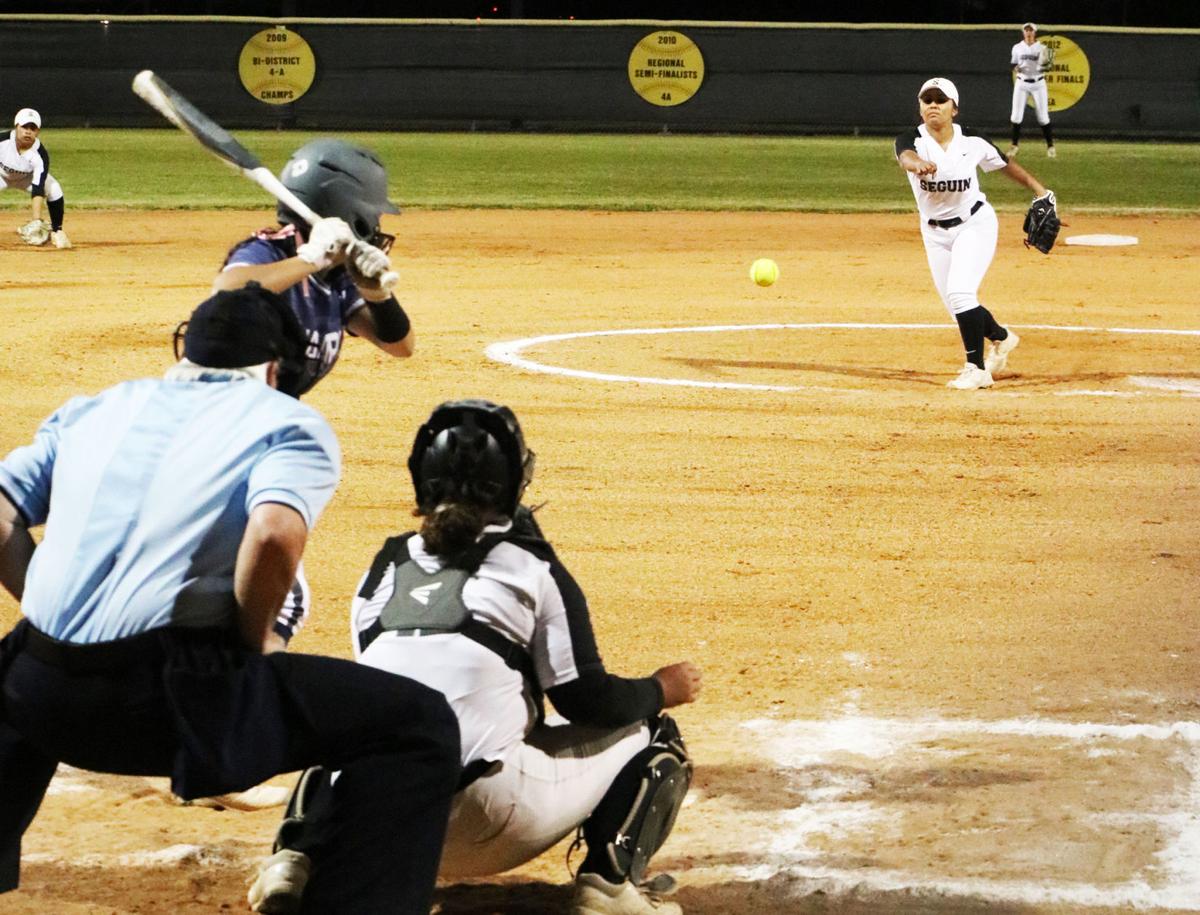 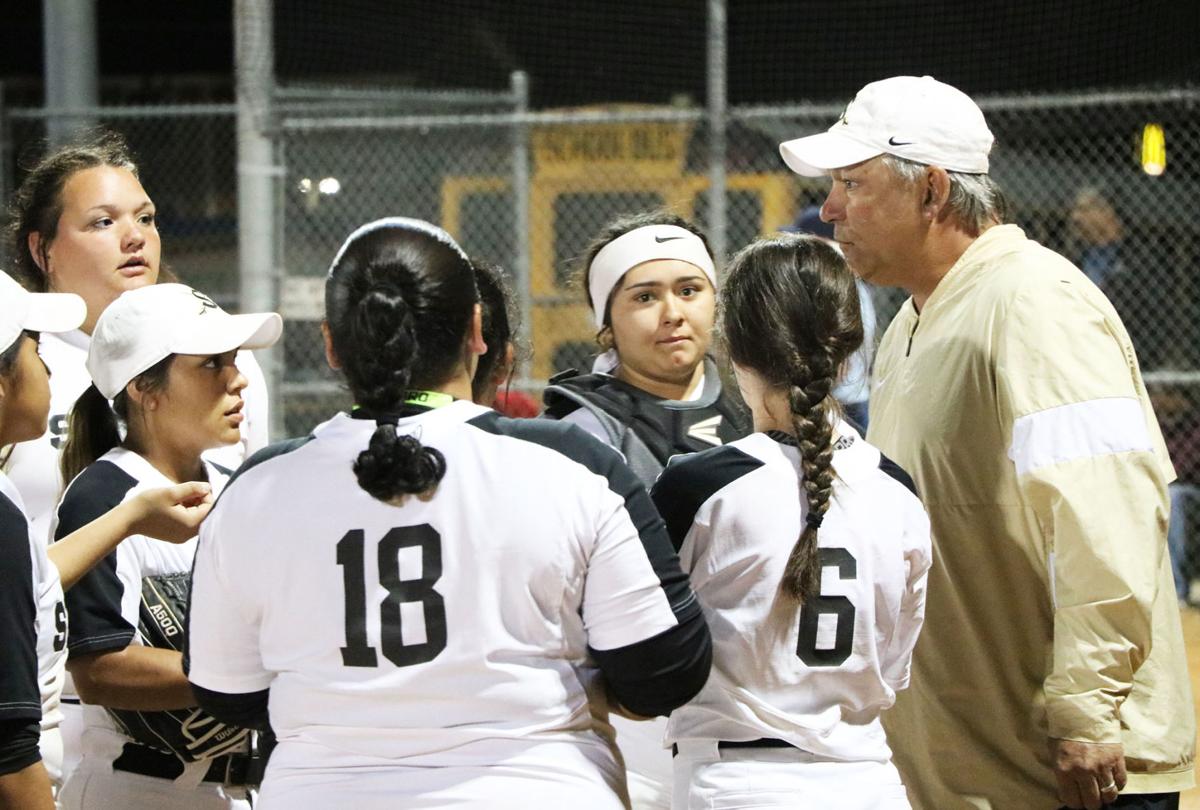 Seguin head coach John Garcia (right) talks with his team in between innings of the Lady Mats' 9-8 win over Boerne Champion on Friday night.

Seguin head coach John Garcia (right) talks with his team in between innings of the Lady Mats' 9-8 win over Boerne Champion on Friday night.

The ball hung in the air forever.

When Seguin’s Madaline Bone hit a towering fly ball to right field with the bases loaded and two outs in the bottom of the sixth, it appeared that the Lady Matadors would go into the seventh trailing by a run.

But the ball appeared to catch a little whiff of a wind as it tumbled out of the air and toward the Boerne Champion right fielder.

It drifted just enough that she had to make a last second adjustment — it hit her glove, and fell harmlessly to the ground.

Three runs came home, and the Lady Mats pulled out a crucial district contest against the Chargers, 9-8, in what was their third win of the day on Friday.

“It kind of went back and forth,” head coach John Garcia said. “Both teams played were playing good and both teams made mistakes that hurt themselves and gave the other team a chance to get in there.”

The Lady Mats were playing their third game of the day on Friday, having won against Southside (7-5) and Edcouch-Elsa (11-1) earlier in the day in the tournament at Huber Ranch.

“Unfortunately that’s the situation we were in with the way the district scheduling came out,” Garcia said. “The tournament we have we’ve got 40 teams. We told the girls on Monday it was going to be a grind this week.”

The Mats played two games Thursday, three on Friday and another two on Saturday.

After a scoreless first couple of innings, the Chargers put three on the board in the top of the third and Seguin responded immediately.

Marissa Bradley had an RBI single, and Ashlynn Flores blasted a triple to score two more as the Lady Mats came back to tie the game, 3-3.

“We did make adjustments, made better choices and had quality at bats,” Garcia said. “The adjustment was to be more patient, be selective and not chase bad strikes — to start letting these go.

Seguin would add two more in the fourth in to take a 5-3 lead, but Champion got three in the fifth and added another run in the sixth to take a 7-5 lead.

Then came the bottom of the inning, and it appeared that the Lady Mats would have to go on to the seventh to try and make the comeback after the first two batters were out.

But Seguin got two walks and a miscue from the Chargers to load the bases, before Bone’s fly ball was too hard to handle, and the three runs scored to give the Lady Mats the lead.

Flores started the game for the Mats, giving up three runs on seven hits through the first three innings, before Bradley came on in relief in the fourth.

And while she gave up five runs on seven hits, it was her pitching in the top of the seventh that secured the win for the Lady Mats.

Bradley gave up a triple to the fence and a double that scored a run to pull Champion within one.

But the senior pitcher got the last two outs and stranded the runner at second base for the one-run win.

“She’s a four-year starter, a senior, and that’s what you would expect,” Garcia said. “We’ve just gotten used to that with her.”

The win gave Seguin a 3-1 mark in District 26-5A as they moved to 14-6 overall on the season. Champion suffered its first district loss of the season to fall to 2-1.

“We feel like if we can put the ball in play, that we can compete in this district,” Garcia said. “That’s kind of what we did there at the end, we found a way to get on and that was huge in the sixth inning, when we put together those four runs.”

The win over Champion was the most important win of the day for the Mats.

“This was huge,” Garcia said. “I think playing the tournament games today, and winning those today, just put them in the right frame of mind, ‘hey, this is our day, let’s finish it with another win.’”

For the game Bradley went 2-4 at the plate with four RBI’s, Bone got three RBI’s on the sixth inning fly ball and Flores went 1-3 and drove in two.

Seguin played two more games in the tournament on Saturday.

The Marion boys went 3-0 at the Nixon-Smiley tournament, exploding for 57 runs in three games.

The Bulldogs beat Faith Academy 22-4 and Bloomington, 24-3, on Thursday, before shutting out Bloomington again on Friday, 11-0.

The Bulldogs’ softball team went 1-1 on Friday at the Blanco Tourney, losing to St. Anthony, 5-3, and beating Center Point, 8-0.

The Lady Panthers softball team beat Pleasanton on Friday 13-3, while the baseball team dropped two games at the Devine tourney, falling to SA Christian and Cornerstone by 4-1 and 8-4 scores.