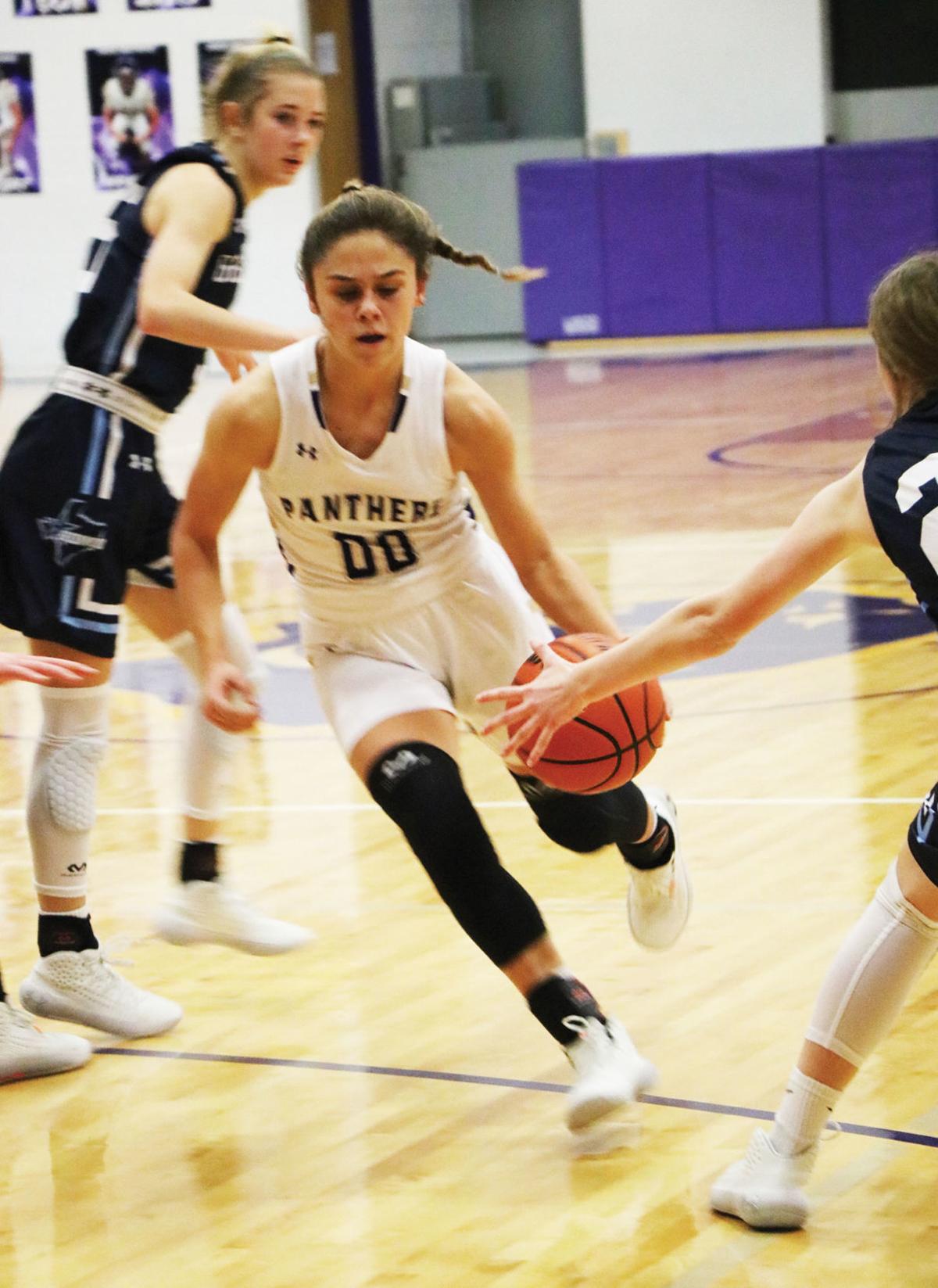 Navarro's Laylin Sturm drives between defenders in the Lady Panthers' loss to Midland Greenwood in the Gold Championship game of the Navarro Tourney on Saturday, Dec. 7, 2019. 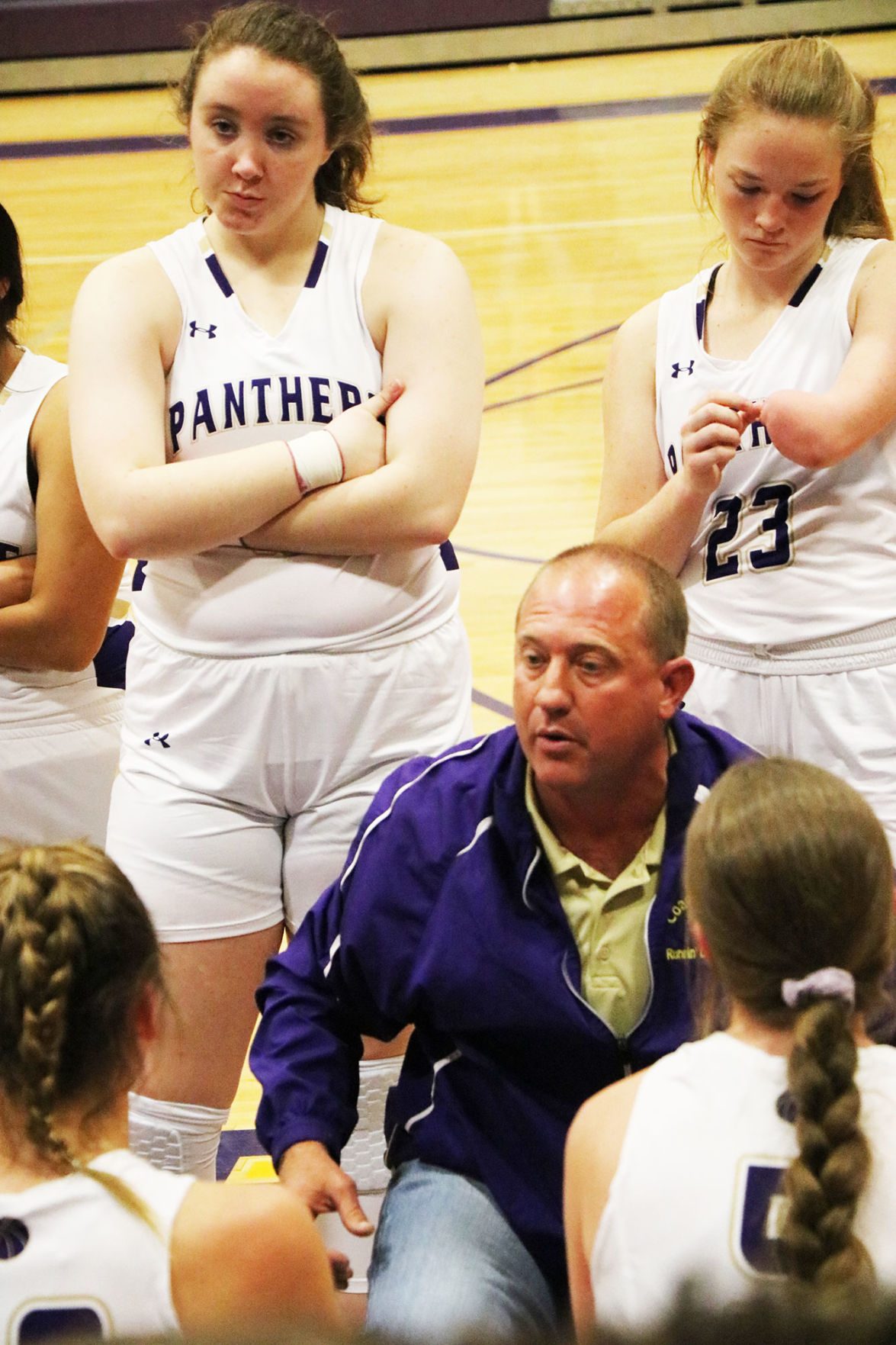 Head coach Darell Harborth talks in the huddle during a timeout in Navarro's loss to Midland Greenwood in the Navarro Tourney on Saturday.

Navarro's Laylin Sturm drives between defenders in the Lady Panthers' loss to Midland Greenwood in the Gold Championship game of the Navarro Tourney on Saturday, Dec. 7, 2019.

Head coach Darell Harborth talks in the huddle during a timeout in Navarro's loss to Midland Greenwood in the Navarro Tourney on Saturday.

Four straight wins in their own tournament — and a nine-game win streak — came to an end Saturday night at Navarro, as the Lady Panthers (11-5) fell to Midland Greenwood, 54-31.

The loss came in the Gold Championship game on Saturday night.

“We’re playing extremely well and won some tough games,” head coach Darrell Harborth said. “We were probably in the toughest pool there and I do that for a reason, so that we can have some battles and compete.”

In the wins over JP II and Floresville, freshman Tatum Harborth led the way with 13 and 18 points, respectively. Freshman Laylin Sturm had 10 against Floresville and freshman Ryanne Hepp had nine versus JP II. Senior Ali Harless added nine and junior Sara Benner had seven in the win over Floresville.

Saturday night, the Rangers jumped out to a 17-5 first quarter lead, as Navarro didn’t get its first bucket until there were under three minutes left in the quarter.

The Lady Panthers closed the lead to nine at 28-19 after a six-point run that included two Tatum Harborth free throws, a bucket by Sturm and two free throws from Harless.

It was as close as they would get the rest of the game.

“Tonight, I hate to say it, but we maybe laid a little bit of an egg,” coach Harborth said. “I don’t think we had, by far, our best game, but that might have been the best team we played.

“They came out and played extremely well and taught us something, I hope.”

Rebounding against a bigger Greenwood team and guarding its post player (Mathes) was an issue for the Lady Panthers in the game. Mathes would finish with 25 points on the night.

“We’re not the biggest team in the world,” Harborth said. “Their post play was very good, probably the best we’ve seen this year — and they abused us a little bit tonight.

“We need to get up and down the floor because we’re not the biggest team in the world and they did a good job of slowing us down a little bit.”

Harborth used the press sparingly against the Rangers, after Greenwood broke it and scored on several easy buckets throughout the night.

“We tried to here and there,” Harborth said. “That’s a credit to them and how good they are, because they were able to break it pretty easily and get some things.

“Against good ball clubs, you have to be able to play good half court defense, because they’re going to break the press.”

Tatum Harborth was the only Panther in double figures for the contest with 11, while Sturm added eight and Mary Gilliam had five in the loss.

Despite the defeat, Harborth was pleased with what he saw over the three days of the tournament from the Lady Panthers.

“Every game was a great team effort, we had different girls contributing throughout,” coach Harborth said. “I think we’re beginning to grow and come together and we’re just going to continue to get better.”

Sturm and Tatum Harborth both made the All-Tournament team.