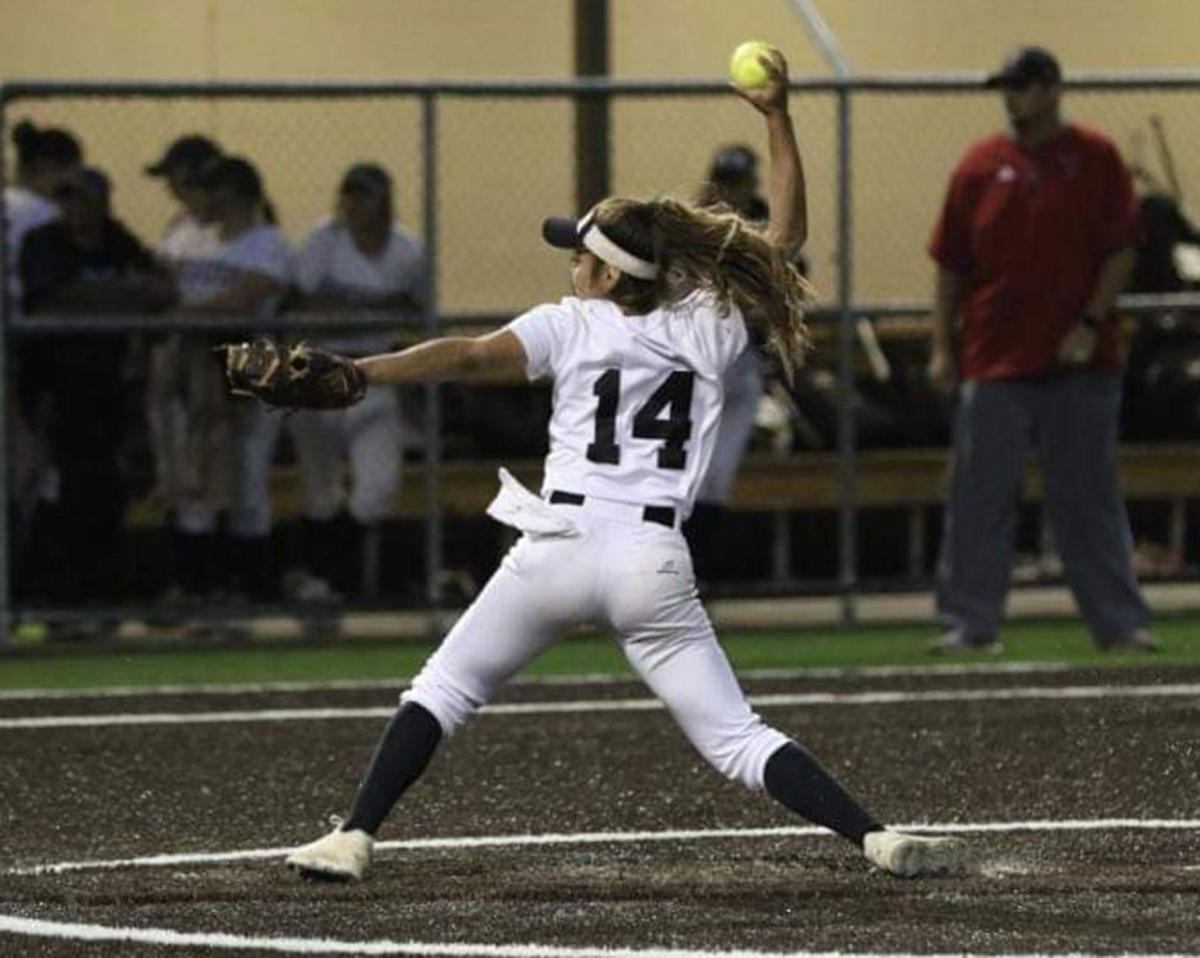 Seguin’s Ashlynn Flores pitches for the Lady Mats. Flores will pitch and play second base for Seguin this season and head to Coastal Bend College in the fall. 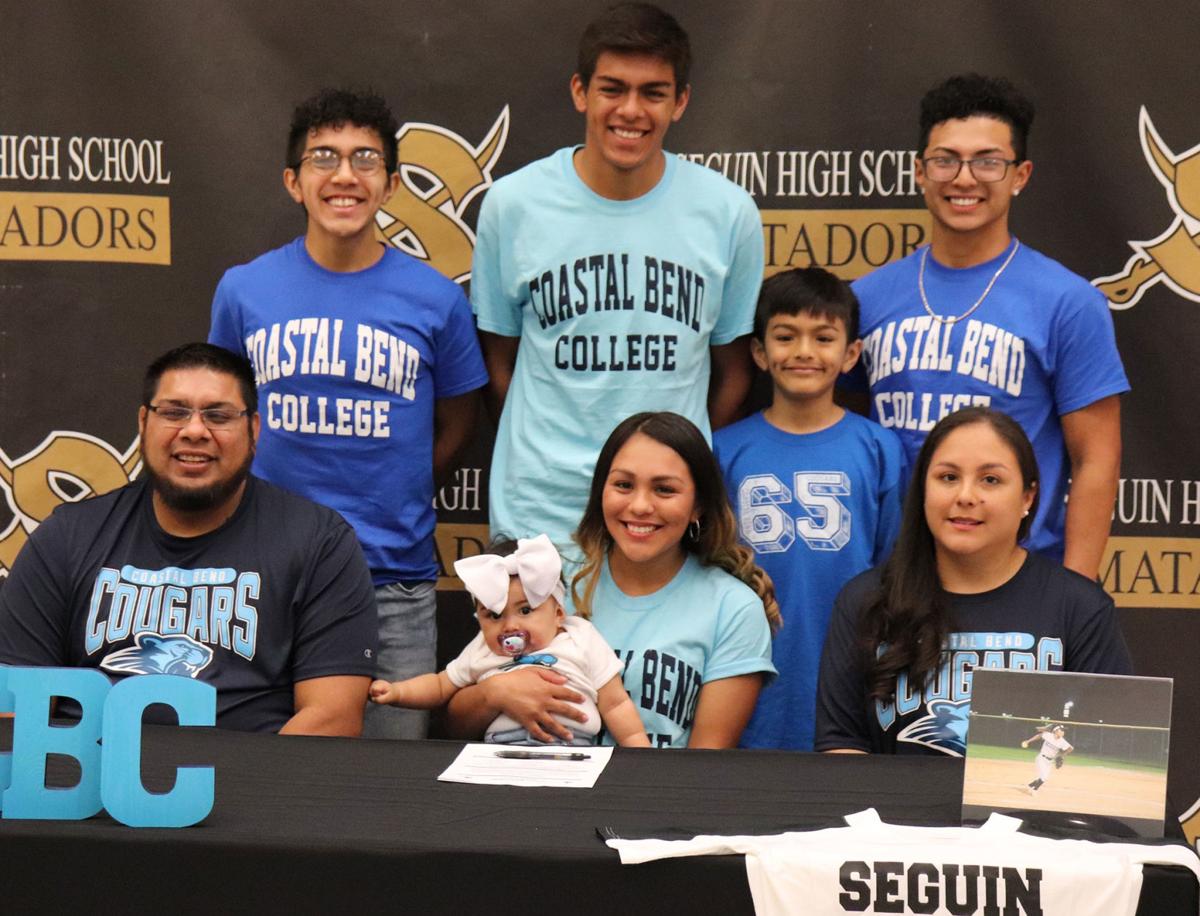 Ashlynn Flores (center), holding her daughter, Kaiya, is surrounded by family as she signs her letter of intent to play softball for Coastal Bend College in Beeville on Thursday, Feb. 13, 2020.

Seguin’s Ashlynn Flores pitches for the Lady Mats. Flores will pitch and play second base for Seguin this season and head to Coastal Bend College in the fall.

Ashlynn Flores (center), holding her daughter, Kaiya, is surrounded by family as she signs her letter of intent to play softball for Coastal Bend College in Beeville on Thursday, Feb. 13, 2020.

Even with that challenge, Flores continued going to school, although her softball career was put on hold.

Now the pitcher and second basemen for the Lady Matadors will be back on the field this season — and she’s got a place to continue that career into college.

Flores signed on Thursday to play softball for Coastal Bend College in Beeville, surrounded by her family, friends, coaches and her daughter, Kaiya, there supporting her.

Getting back on the field was important for the senior.

“I wanted to get back last year, but I couldn’t,” Flores, 18, said. “My senior year was big for me, so I was just really excited to come back and play.”

Flores started for the Lady Mats her freshman and sophomore years, before taking last season.

But she stayed in class the entire time and is on track to graduate this spring.

“We always emphasize that the student-athlete is a student — and we make that a priority in this program,” Seguin head coach John Garcia said. “Ashlynn has bought into that 100%. She’s a great kid, a great student, a great ballplayer and a great mom.”

She sees her ability to pitch and to put the ball into play when she’s at the plate as her strengths on the softball field.

“I would say my pitching is my strong suit,” Flores said. “I’m not really a power hitter, I hit to put the ball in play and try and make something happen.”

“She’s one of our slappers and has emerged as one of our top ones,” Garcia said. “She’s good enough that she’s helping to develop our younger players.”

Flores will rotate with pitchers Mckenzie Neumann and Marissa Bradley this season.

“It’s a good problem to have, when you’ve got three that you can rotate in at any time,” Garcia said. “It gives an extra starter, an extra weapon and makes us harder to scout when there’s three pitchers they have to look at instead two. It’s a win-win for us.”

Garcia is glad to have Flores back playing for his team, and thinks Coastal Bend got a good player.

“She’s bringing her experience as a four-year player,” he said. “We lost so many seniors last year, that her experience is vital for us this season and any success we have.

“Going to that next level, she’s proved that with any adversity coming up, she’s tough and is going to stick it out until she gets the job done.”

The team this season has played a couple of scrimmages so far, and Flores likes what she sees for the Lady Mats, even though Garcia is replacing six graduated senior starters.

She will be leaning heavily on her family for help with Kaiya while she’s in school.

“I have a very supportive family,” Flores said. “They’re going to help me out a lot.”

She made the choice to go to Coastal Bend, not too far from Seguin, for that support, and because she liked the coaches, players and campus.

“I had a number of choices,” Flores said. “When I went to tour the campus, it felt like home automatically. I wanted to feel comfortable and not worry — and that was I felt when I went to Coastal Bend. The coaches, my teammates, they really took me in and made me feel like I was already a part of the team.”

Flores plans to focus her studies on radiology at Coastal Bend.

“I want to major in radiology,” she said. “I’m excited to get to learn something new, something I couldn’t study for in high school.”