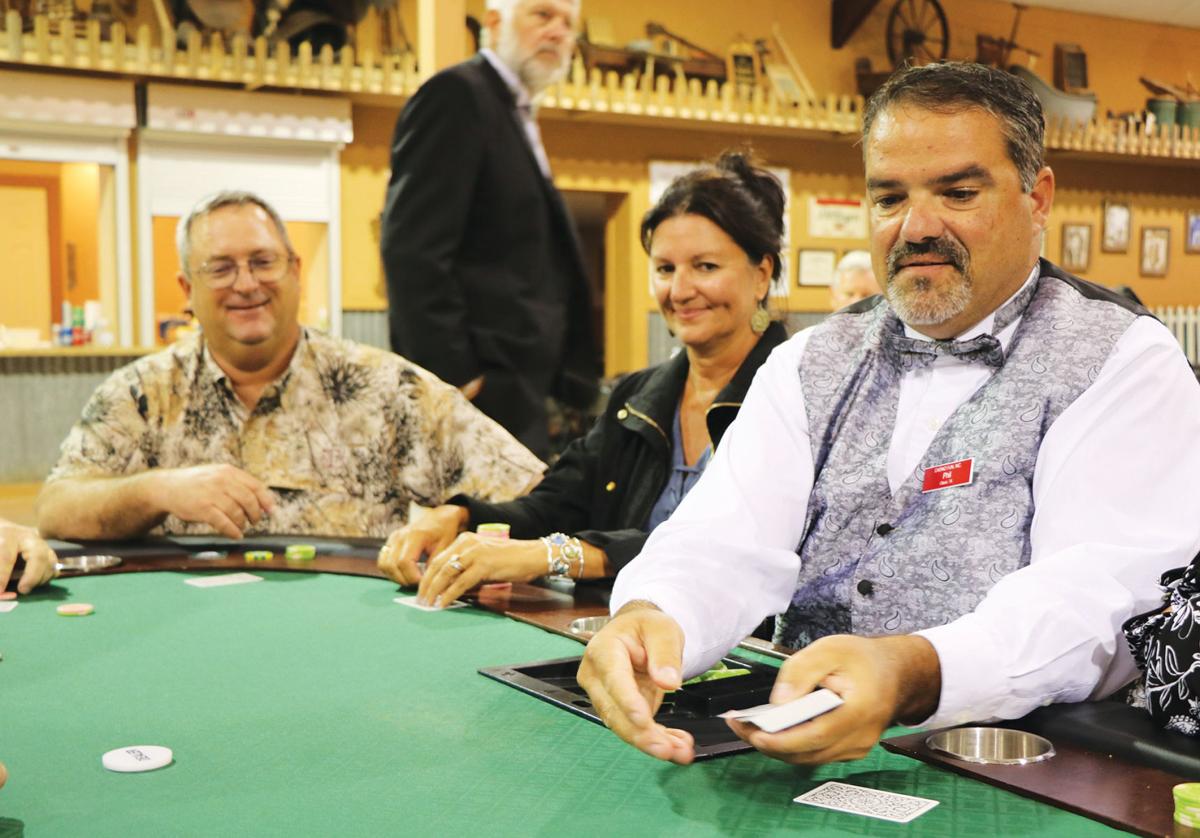 The dealer from Casino Fun deals a hand at the final table of last Saturday's charity poker tournament. The tournament raised money for the Big Red Barn, with 77 players giving it a shot to go to the World Series of Poker Main Event in 2020. 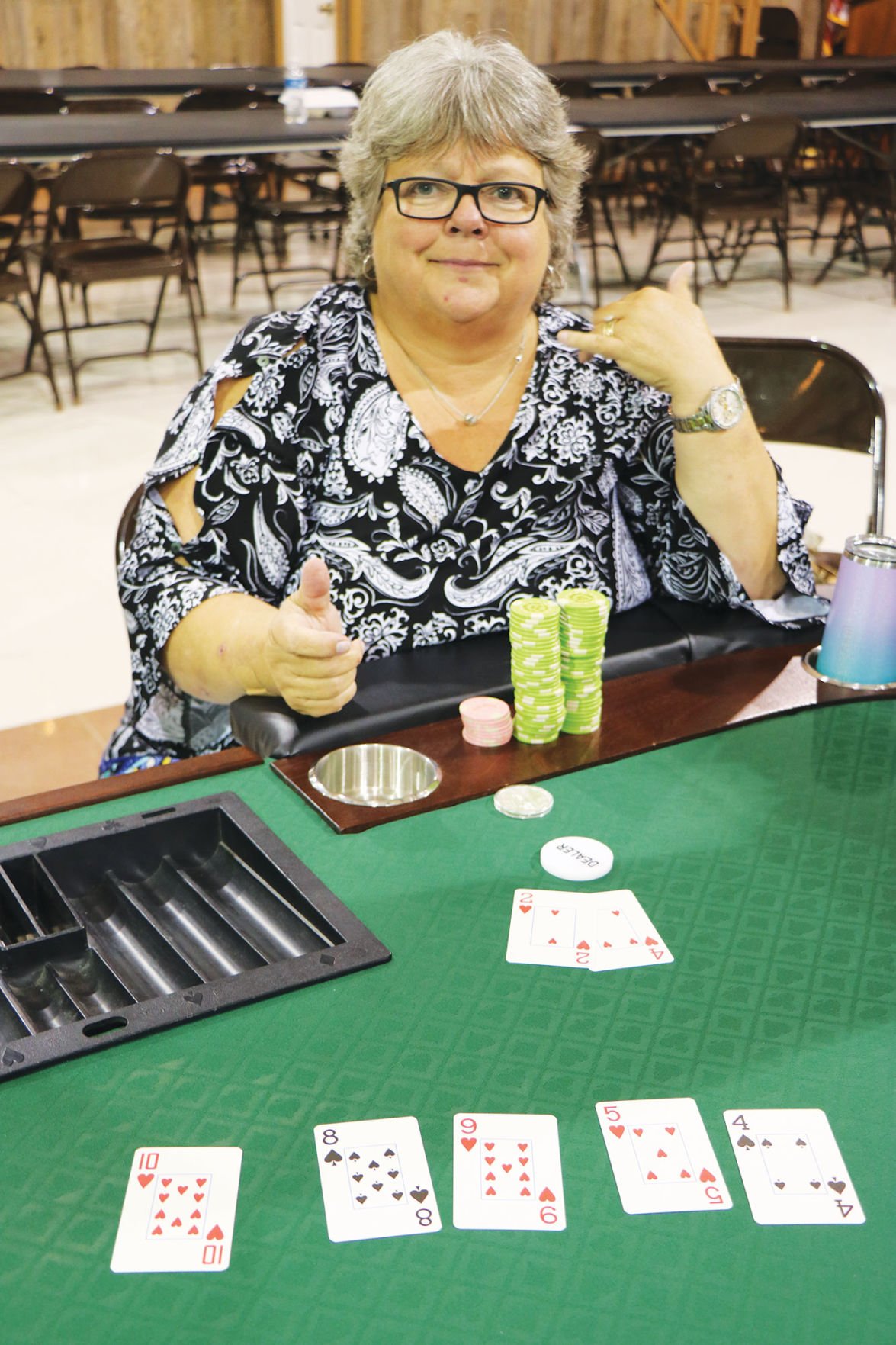 The dealer from Casino Fun deals a hand at the final table of last Saturday's charity poker tournament. The tournament raised money for the Big Red Barn, with 77 players giving it a shot to go to the World Series of Poker Main Event in 2020.

It’s 10 p.m. on Saturday night and the folks at the Texas Agricultural Education and Heritage Center, also known as the Big Red Barn, are there later than usual.

At a table in the middle of the banquet room, Patty Wright is nearly in tears.

Wright was so ecstatic because she had just cashed her ticket to the World Series of Poker Main Event next year, beating out 77 players in the All In For Agricultural Education Texas Hold ‘Em Poker Tournament.

“You don’t understand, I’ve always wanted play in the Main Event, it’s been on my bucket list for years,” Wright said.

It was awesome seeing how happy she was, as I also played in the tournament and was at the final table with her that night.

If I’m being honest here, of course I wanted to win it myself, but it was not to be. Seeing her joy and elation at winning the $10,000 seat made my sixth-place finish a little more bearable.

Next year poker gods, next year.

The folks at the Big Red Barn have regular small fundraising events, but nothing like the tournament, which is their largest fundraiser of the year.

Starting out with a casino night a few years ago, the board at the agricultural education center just north of Seguin made the switch to a poker tournament last year.

“We started this six years ago as a casino night,” Ron Heinemeyer, the director and a board member of the Big Red Barn, said. “We decided as a fundraiser that we could do better with a sanctioned Texas Hold ‘Em tournament.

The tournament raised around $25,000 last year.

“The important thing about all of this is that the money helps us to fulfill our mission, which is to educate our kids in the field of agriculture,” Heinemeyer said.

The tournament was sponsored by a number of businesses in and around Seguin, with donated prizes for many of the top 10 finishers.

“Some of the prizes are donations from businesses in town, on up to the top prize of the seat at the World Series,” Kerry Koehler, the president of the board, said.

While the top prize was the seat to the World Series, the rest of us at the final table won some cool swag, up to a 65-inch TV for third place, and a seat to a poker tournament in New Orleans (second place) next May.

Suicide Jacks, an online poker site where people pay a monthly membership fee to play in tournaments on the site, gave away one-month memberships to several lucky winners at the tournament.

Casino Fun, a casino party operator out of San Antonio, ran the tournament, bringing in professional dealers, the tables, cards and chips for the event.

Last year’s winner was Ben Notgrass, who turned his ticket into an $18,000 payday at this year’s Main Event.

Notgrass used $2,000 of that to purchase 10 tickets to this year’s tournament — and gave them all away.

That’s how I was able to play, as Notgrass called me the night before and told me he had a ticket if I wanted to play.

“I was just paying it forward, that’s what it’s all about,” he said.

Notgrass tried the tourney too, looking for a repeat of last year’s win. He was eliminated about four hours into the tournament.

Brandy Low, the wife of Texas Card Room (in Seguin) owner Wayne Low, played in her first ever tournament at the event.

“I had never played a tournament before,” she said. “I told him about 1 o’clock today that I was going to play in the tournament.”

Both have a history in agriculture, further influencing her decision to play.

Her son had participated in programs at the Big Red Barn when he was in high school.

“He competed in speech competitions out here through the F.F.A.,” Brandy said.

Brandy was not too happy with me that day, as I happened to be the player that knocked her out of the tournament.

“I got busted out by you,” she said, laughing. “Your Ace, King was golden over my pocket Kings.”

Don’t worry Brandy, you’ll get me next time, I’m sure.