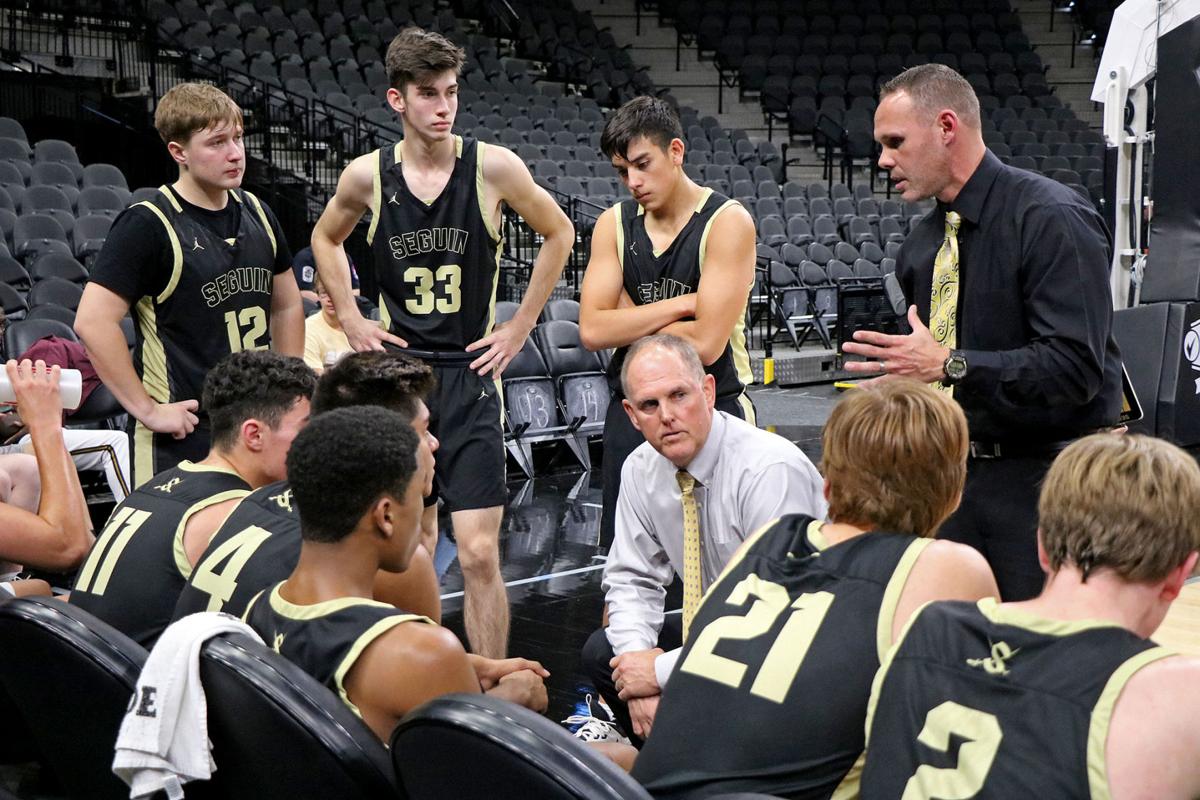 Seguin head coach Dwayne Gerlich talks in the huddle during a timeout in the Mats win over La Vernia on Tuesday, Dec. 3, 2019. 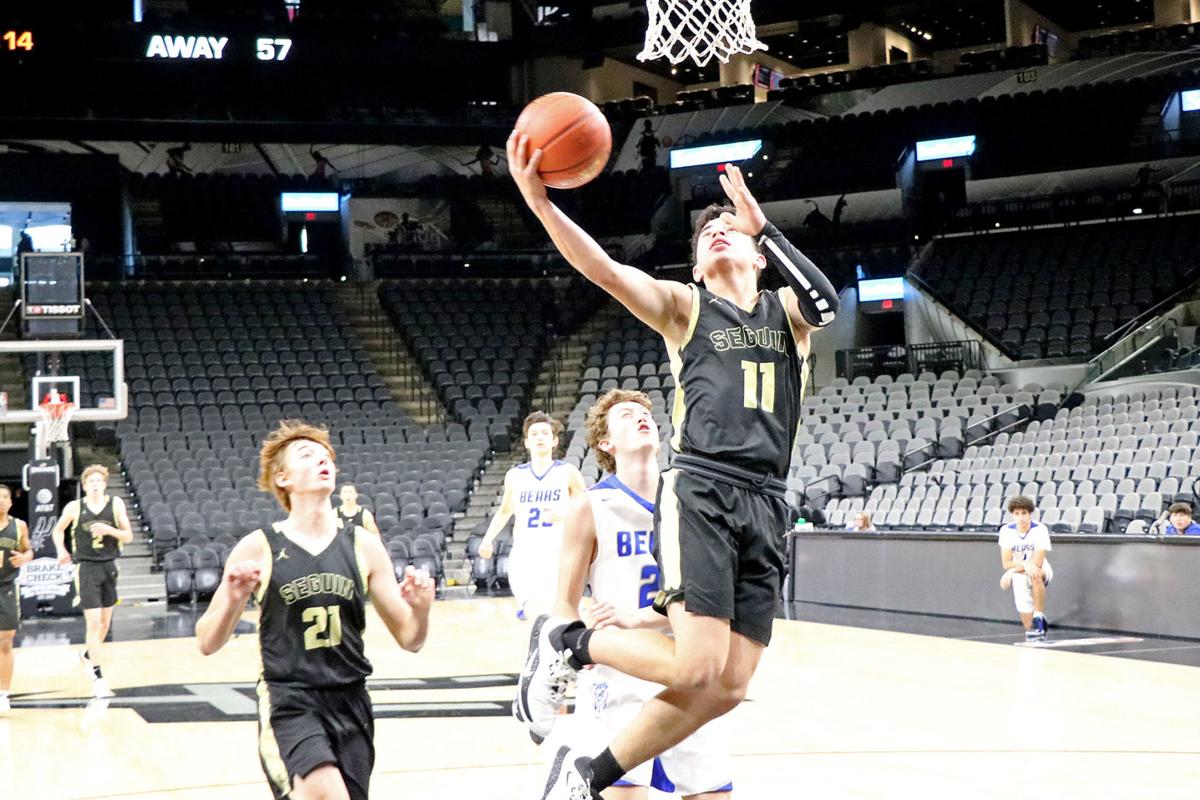 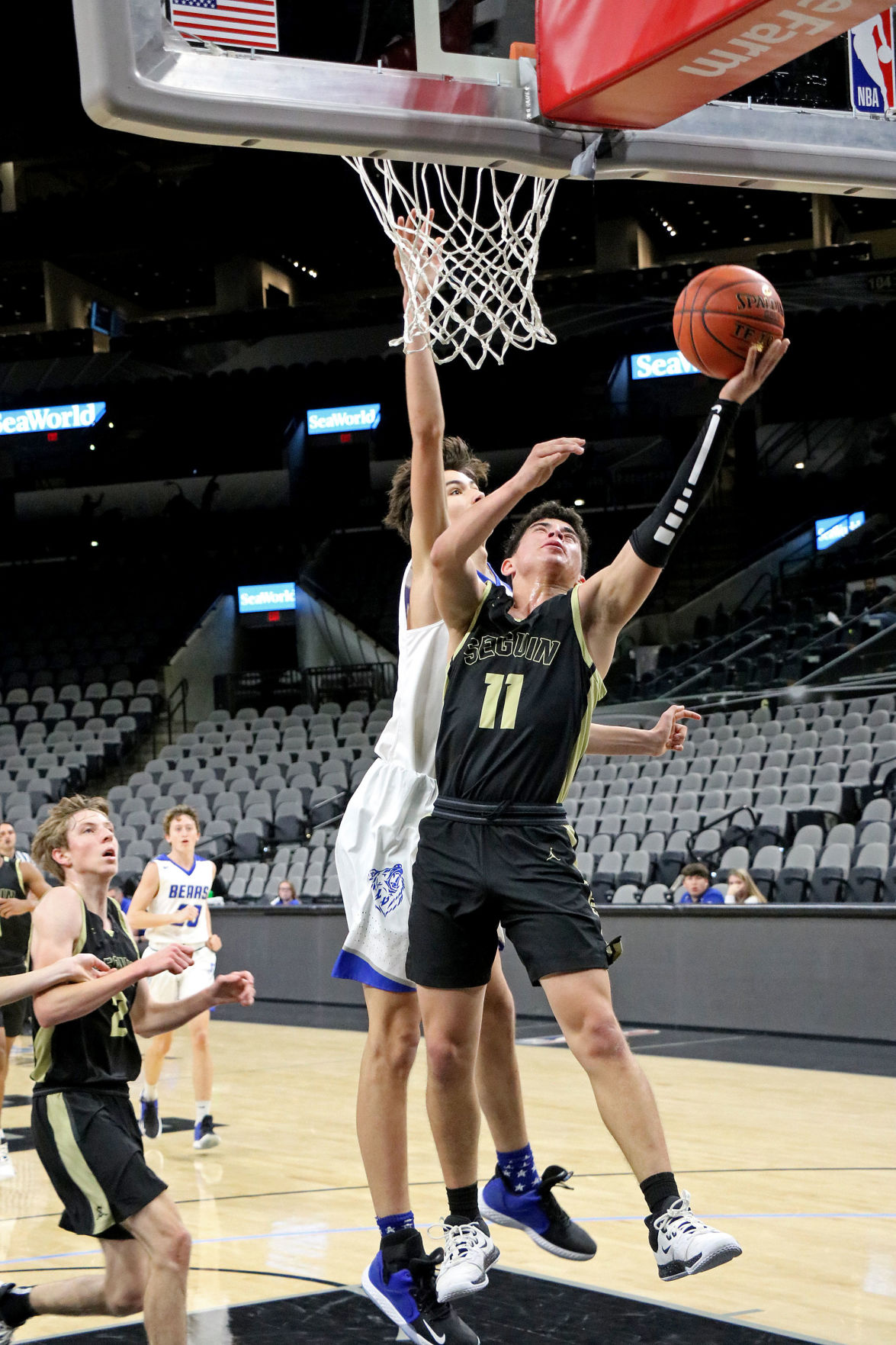 Seguin head coach Dwayne Gerlich talks in the huddle during a timeout in the Mats win over La Vernia on Tuesday, Dec. 3, 2019.

There may not have been thousands of basketball fans Tuesday afternoon at the AT&T Center, but the Seguin Matadors played like there were.

The Matadors took on La Vernia in a game originally scheduled for Tuesday night at La Vernia that was moved to the home of the San Antonio Spurs.

Seguin used a pressing full court defense to harass the Bears into turnovers, and made nine three’s through the course of the game to handle La Vernia, 80-68, and move to 3-2 on the season.

The opportunity to play at San Antonio’s most famous venue was a thrill for the players and the coaching staff alike.

The Spurs sent out an email over the summer with available dates and the coaches got together and agreed to play the game at AT&T Center.

“The coach called me and asked if we wanted to play,” Seguin head coach Dwayne Gerlich said. “I got to experience it once when I was the coach at Roosevelt and it was a neat experience for the kids.

“We got all the details and it was good to go.”

R.J. Acuna was in awe of playing the game in the venue.

“It’s an experience I’ll remember for the rest of my life,” he said. “Just the atmosphere, watching it on TV, it’s so surreal to actually play here.”

Guard Christian James came out hot, getting eight of his 15 points in the first quarter, when the Mats built a 23-12 lead. He was understandably happy to get a chance to play at AT&T.

“It was very fun, I never thought we would get the chance to do this,” James said.

Playing in such a large venue, versus a high school gym, took a little bit of an adjustment, Vela said. Vela made that adjustment well enough to hit three three’s in the first half on the way to a team-high 19 points.

“It takes a while to get used to it but once you do, it’s just knock down after that,” Vela said. “Defense was the main thing, when you come out hard on defense, it leads to easy buckets.”

Coach Gerlich noted the high shooting percentage for the Mats in the game.

“The thing that was impressive was the shooting,” Gerlich said. “You’re in an unfamiliar place, the depth perception is tough and we did well with it.”

The Mats led by as many as 24 (68-44) in the third quarter after a bucket by Tyson Coleman, and coasted in from there, as La Vernia scored and closed in the fourth after the game was out of reach.

Acuna agreed that the full court pressure was the catalyst for the team in the game.

“The way we come out hot is we use our defense to bring that pressure,” he said. “The offense, you never know if it’s going to be there, but you can always bring your defense.

“It helps get our energy going and when we do that, we knock down our shots.”

Gerrit Twitero added 15 for the Mats, while Acuna had two three’s for eight points, and Tyson Coleman matched him for the game.

Acuna likes where the team is at this point in the season.

“I feel like we are turning a corner,” he said. “I think when we get into district, we’re going to turn some heads for sure. We got a good group of guys, we’ve known each other since fourth grade and we can be really strong.”

Seguin is in action next on Thursday for the Matador Classic at Goldie Harris Gym with two games, at 10 a.m. and 4 p.m.

Kevin Duke is the sports editor for the Seguin Gazette. He can be contacted by e-mail at sports@seguingazette.com .