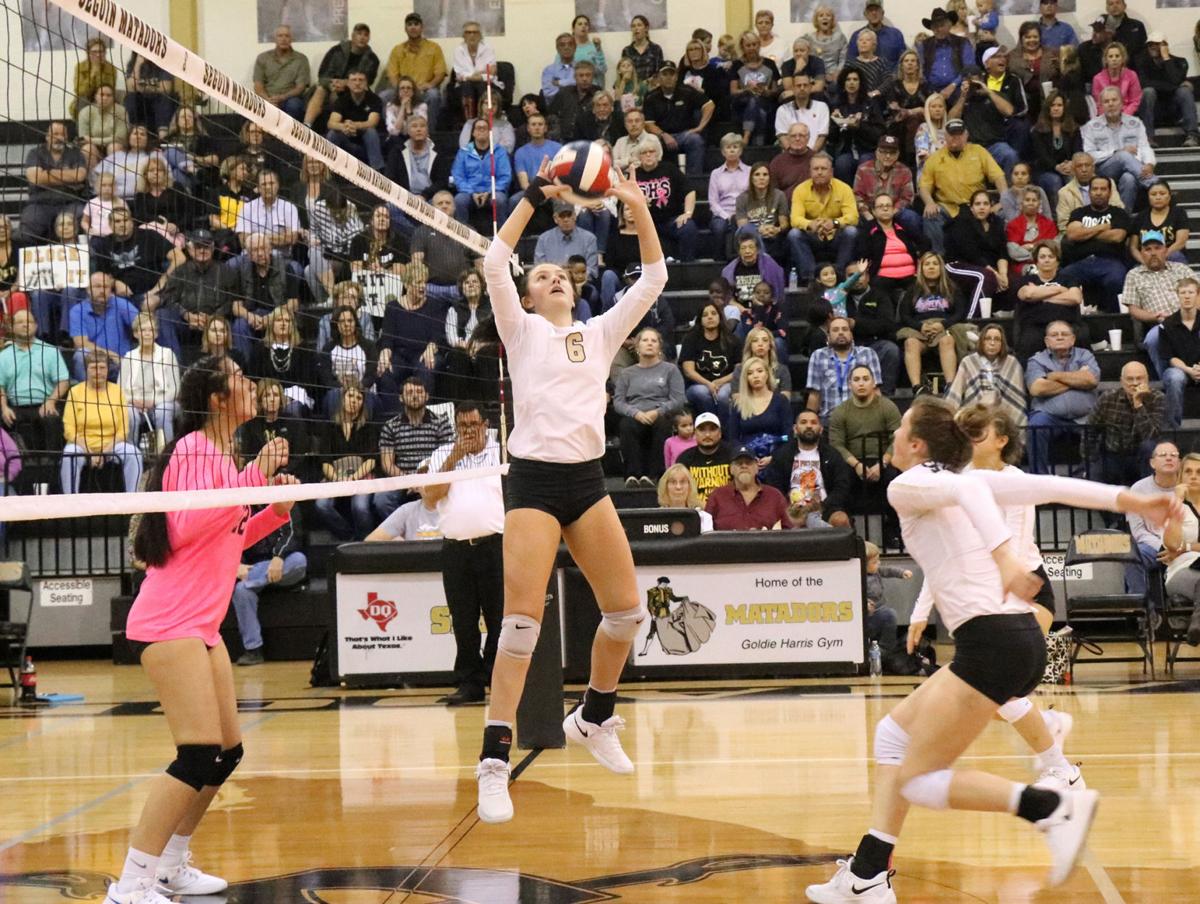 Seguin Riley Brittain (6) sets up a kill during a Lady Mats game in 2018. Brittain is taking her setting skills to the next level, siging to play for Howard Payne University in 2020. 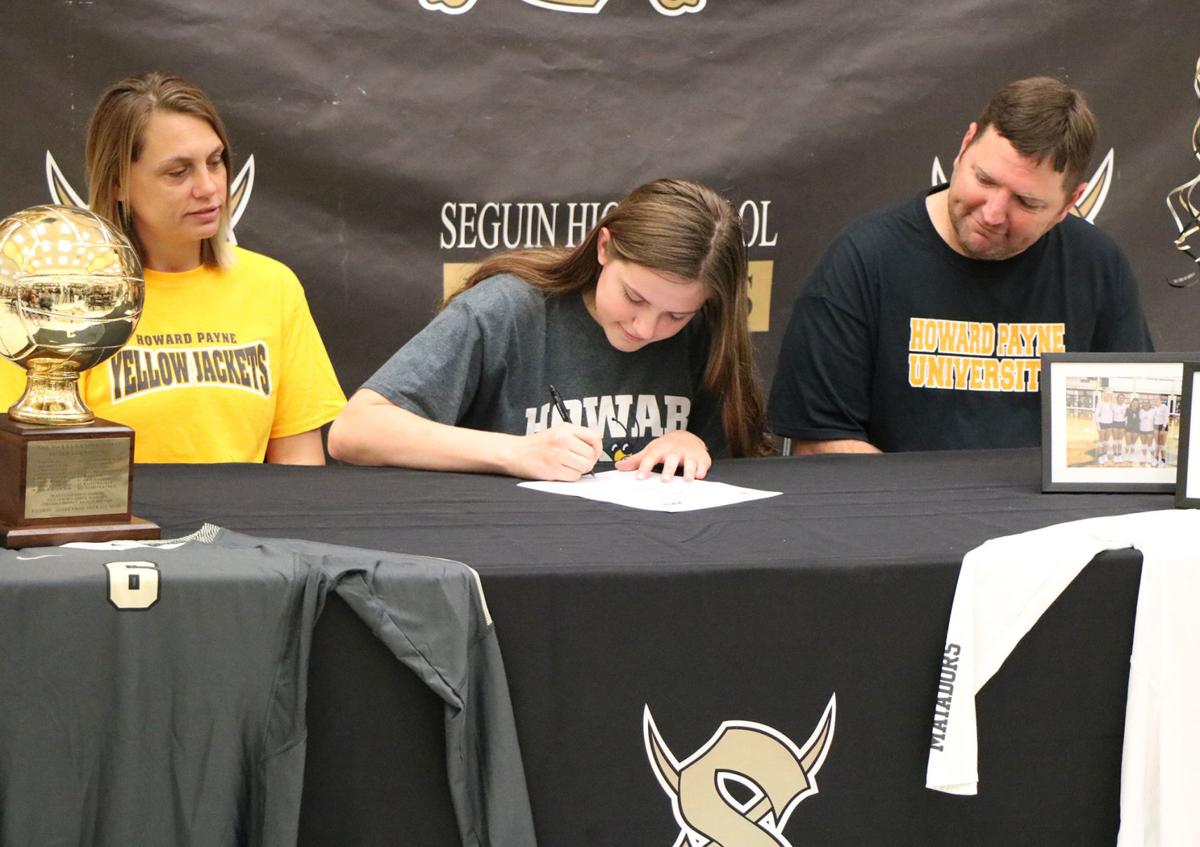 Parents Angela and Dusty Brittain looki on as .Seguin's Riley Brittain signs her letter of intent to play volleyball for Howard Payne University on Friday, Jan. 17, 2020.

Seguin Riley Brittain (6) sets up a kill during a Lady Mats game in 2018. Brittain is taking her setting skills to the next level, siging to play for Howard Payne University in 2020.

Parents Angela and Dusty Brittain looki on as .Seguin's Riley Brittain signs her letter of intent to play volleyball for Howard Payne University on Friday, Jan. 17, 2020.

The hiring of a couple of new coaches a year-and-a-half ago at Seguin High School had a nice side effect.

“We hired both of them summer before last, and they said they had some kids that were athletic,” Stanley said, in introducing Riley at her signing ceremony last Friday at Goldie Harris Gym. Riley was signing to continue her volleyball career at Howard Payne University.

“We’ve had these moments before, and I was wondering, ‘Is she really going to be a volleyball player?’” Stanley continued. “We had a summer league going and we got her to play with our team in San Marcos. I happened to go on vacation, coach McKinney was there and she texted me, ‘this girl is a REAL setter.’”

Stanley found her setter and Seguin had one of its best seasons on record in 2018, advancing to the playoffs after going undefeated in district play.

“We had a great team last year and had a lot of success, Riley was a huge part of that,” Stanley said. “We were district champions for the first time and Riley was ‘Newcomer of the Year’ in the area.’”

Too many awards to list here followed this season, and now Riley will take her skills to the next level.

“We’re just proud of her,” Dusty said. “We wanted her to further her education and her wanting to play is all the more better. We’re excited to continue to watch her and continue to be fans.”

Riley had a big part in being recruited, her mom said.

“She did it all on her own,” Angela said. “She made the highlight video, contacted all the coaches, reached out to the and went to the tryouts. She put in all that work and got that on her own.”

Brittain has played since sixth grade, most of that time in Copperas Cove, before coming to Seguin prior to her junior year.

“I don’t know life without volleyball since the the sixth grade,” Riley said. “When I came here I knew I wanted to play.”

Riley saw the court at Seguin as mostly a setter, but also did some hitting this year while playing with her sister, Reese.

“Coach asked if I could hit and I showed her that I could, so I became hitter and a setter,” Riley said. “This year I played with my sister, so she was setting me up sometimes.”

Being a part of a team, and taking those lessons into everyday life, is one of the things she likes most about volleyball.

“The friends you make, the experiences you learn, it applies to the real world a lot of the time,” Riley said. “You learn time management skills and a lot of responsibilities.

She’s been recruited as a setter by Howard Payne, which she visited in November.

“I went with my father over Thanksgiving break,” Riley said. “I was a little hesitant about the school, and then I went to go play with the team — and I was set. I had to go play for this team.

“They don’t have a lot of setters. She (the Howard Payne coach) told me I did a good job of running the court and being a leader, so I’m guessing that’s what I’ll do there.”

Playing at the next level has always been the goal, Riley said.

“I’ve always dreamed of playing college ball,” she said. “Last year and this year, I wasn’t sure if I was good enough to play college volleyball, but my confidence level from coach Stanley and playing on this team definitely changed that — I’m dead set on playing in college.”