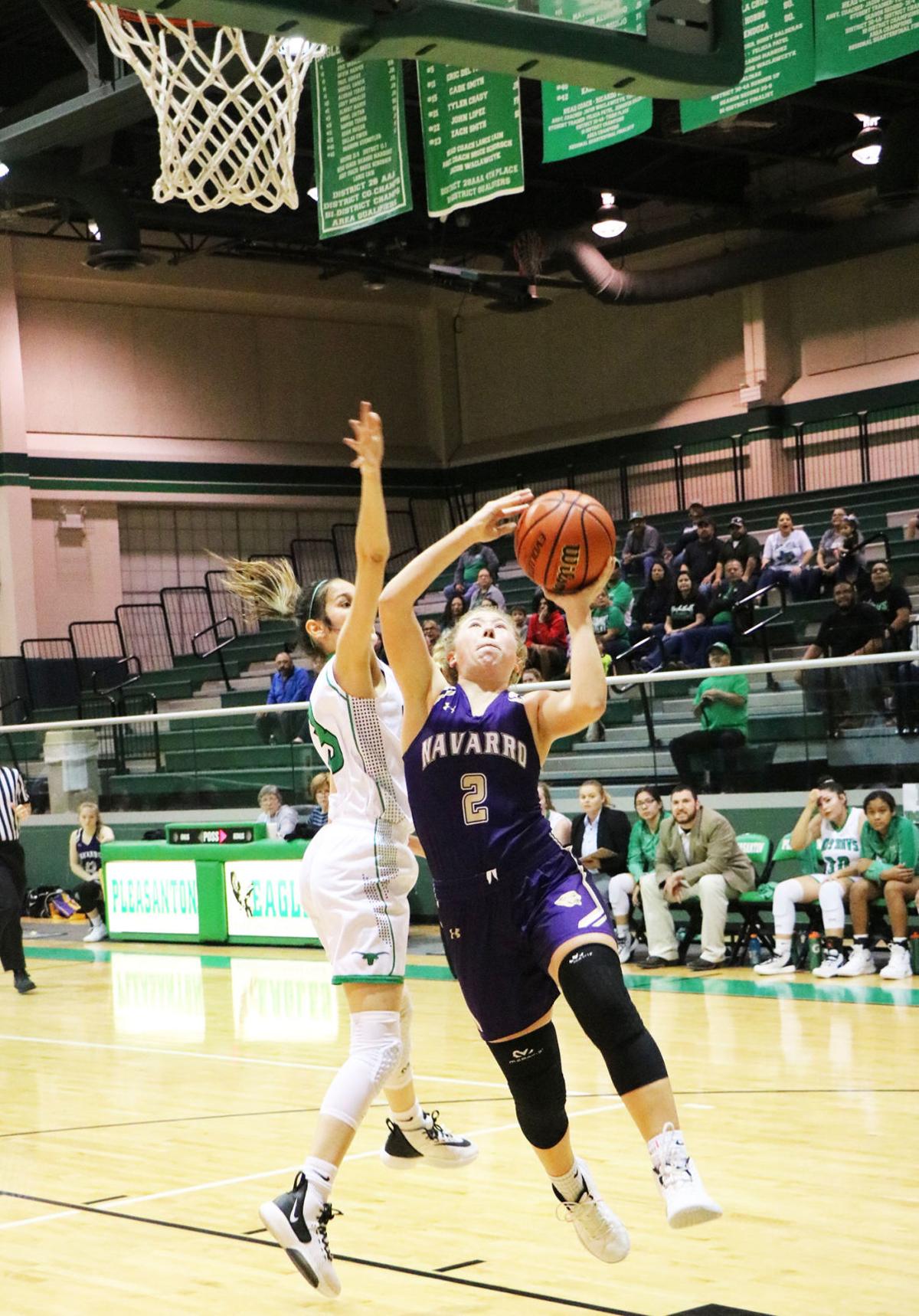 Navarro's Tatum Harborth draws the contact on a layup attempt in the Lady Panthers' bi-district win over Pearsall on Mon., Feb. 17, 2020. 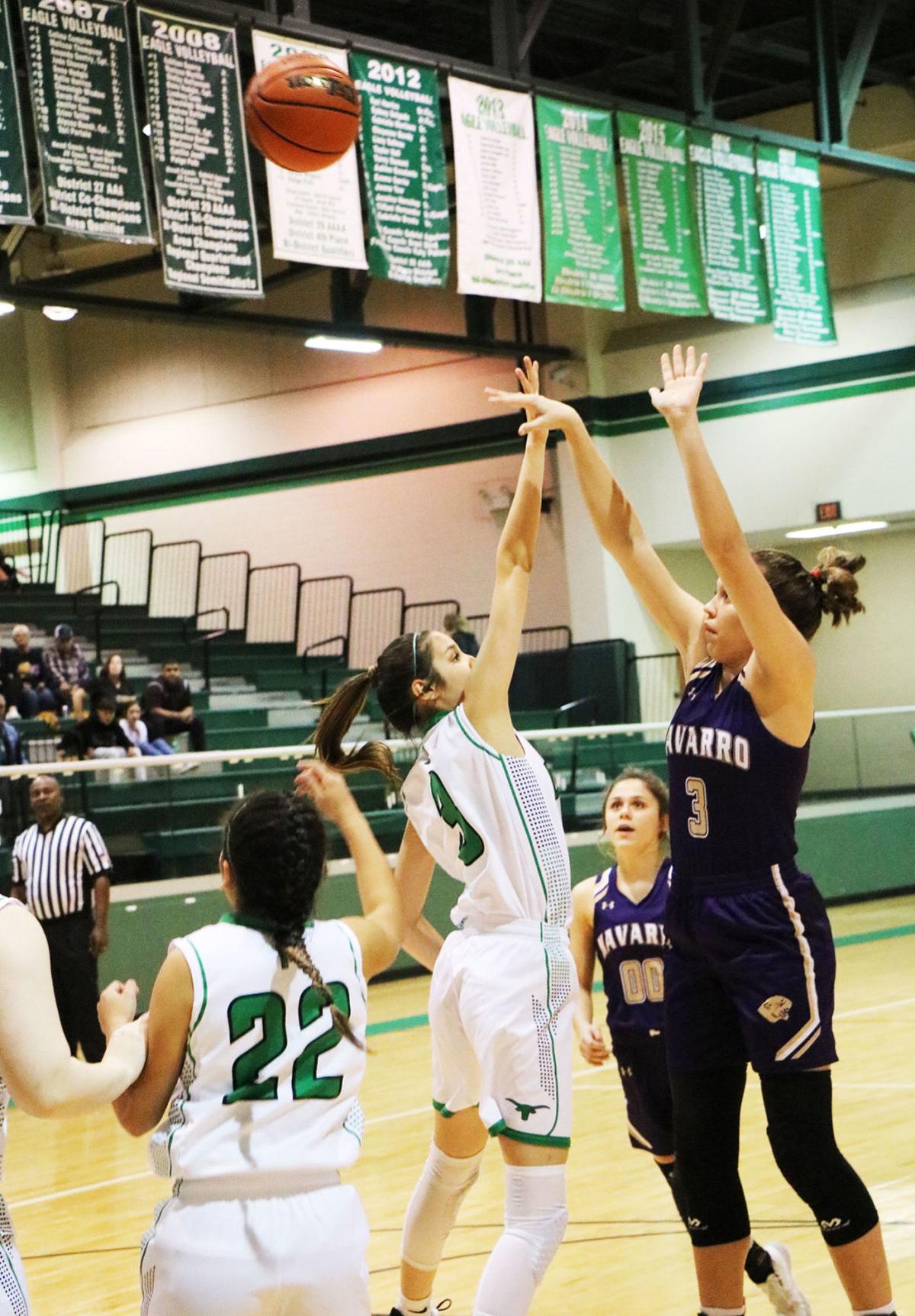 The Panthers' Ryanne Hepp (3) puts up a jumper as Laylin Sturm (00) looks on in Monday night's bi-district win over Pearsall.

Navarro's Tatum Harborth draws the contact on a layup attempt in the Lady Panthers' bi-district win over Pearsall on Mon., Feb. 17, 2020.

The Panthers' Ryanne Hepp (3) puts up a jumper as Laylin Sturm (00) looks on in Monday night's bi-district win over Pearsall.

PLEASANTON — Head coach Darrell Harborth has been talking about the team defense of his Navarro Lady Panthers over the last month of the season.

Navarro (26-10) has not lost a game since the first week of January, has moved up to No. 20 in the state 4A basketball rankings, and had won nine in a row going into the bi-distrct playoff game with Pearsall on Monday night in Pleasanton.

The defense showed up again — in spades — against the Lady Mavs, as Navarro held Pearsall to just three made baskets on the night on the way to a 50-20 blowout win.

While coach Harborth lauded the defense, in typical coach’s fashion, he lamented the offensive effort on the night.

“Our half court defense shut them down, but we struggled to score and missed a lot of easy shots,” the coach said. “But I think our half court defense is just really outstanding right now and teams are ready of our pressure in the full court. So sometimes we’ve got to rely on that half court, and I think it was successful tonight.”

Despite the struggles offensively, Navarro held Pearsall without a field goal until the Lady Mavs hit a jumper with just 2:30 left in the first half.

The Lady Panthers forced around a dozen Pearsall turnovers on the way to a 13-1 first quarter lead, then extended that lead early in the second, when Sara Benner hit two back-to-back threes to stretch the lead to 19-1.

Benner made all three of her three-point attempts in the first half.

“She’s been playing huge for us,” Harborth said. “People don’t expect it because she’s a tall girl, and they’re worried about our other girls driving.

“A lot of teams zone us lately because of our speed in our guard play, so she’s able to float around out there and get some open looks. Whenever she does that for us we’re just that much better.”

Leading scorer Tatum Harborth (the coach’s daughter) had 12 points to lead the Lady Panthers, but struggled to make shots most of the night. She didn’t score a made bucket until late in the third quarter, but got to the free throw line on drives under the basket and made six of those on the night.

“‘I think Tatum struggled, and I think Laylin (Sturm) struggled,” coach Harborth said. “But you know, they’re freshman and it was their first playoff game.

“Hopefully they’ve gotten their feet wet in the playoffs and in the next round they’ll be ready to go.”

Senior Haleigh Ortiz has been playing more in recent games for the coach after missing the majority of the district season with an injury, and scored her first points since returning. A couple of baskets late in the game were great moves inside after she had posted up under the rim.

“Haleigh’s slowly getting better and better,” coach Harborth said. “I tried to get a few more minutes out of her tonight and I could tell that her conditioning isn’t where it needs to be, but she brings some toughness to us and some good post play down there.

“The girls are confident getting it to her and she’s going to get that ball and get it up on the square, so it was good to see her get a couple of buckets.”

While the win came easily for the coach, he knows there are still things to work on as the Lady Panthers advance to the second round.

“We got a decent lead, but I was still frustrated with some of the things I thought we could do better,” coach Harborth said. “But overall I’m happy to get the first ‘W’ and get it under our belt.”

On the night, Tatum Harborth had her 12, Benner broke double figures with 11, while Sturm, Ryanne Hepp and Ortiz chipped in with seven points each.

The Lady Panthers advance to the area round against either Sinton or Port Isabel, which played Tuesday night. The day, site and time were yet to be determined as of press time.

Also on Tuesday, the Marion Bulldogs girls basketball team played in Buda in their bi-district playoff against No. 17 Jarrell. See that story online Wednesday at www.seguin gazette.com