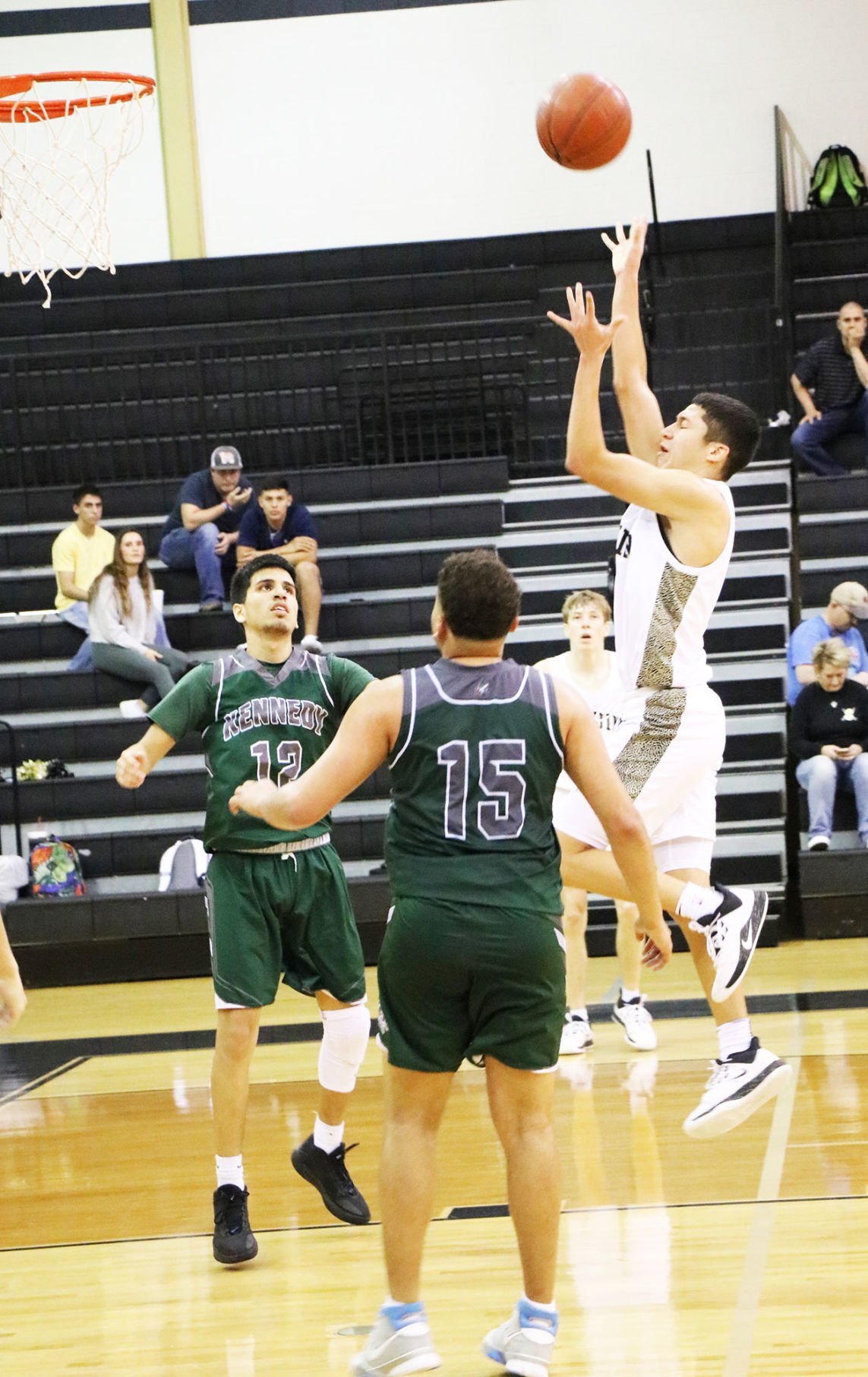 Seguin's R.J. Acuna drives down the lane for two in the Mataodrs' win over SA Kennedy on Friday, Jan. 10, 2019. It was the Mats third district win in a row. 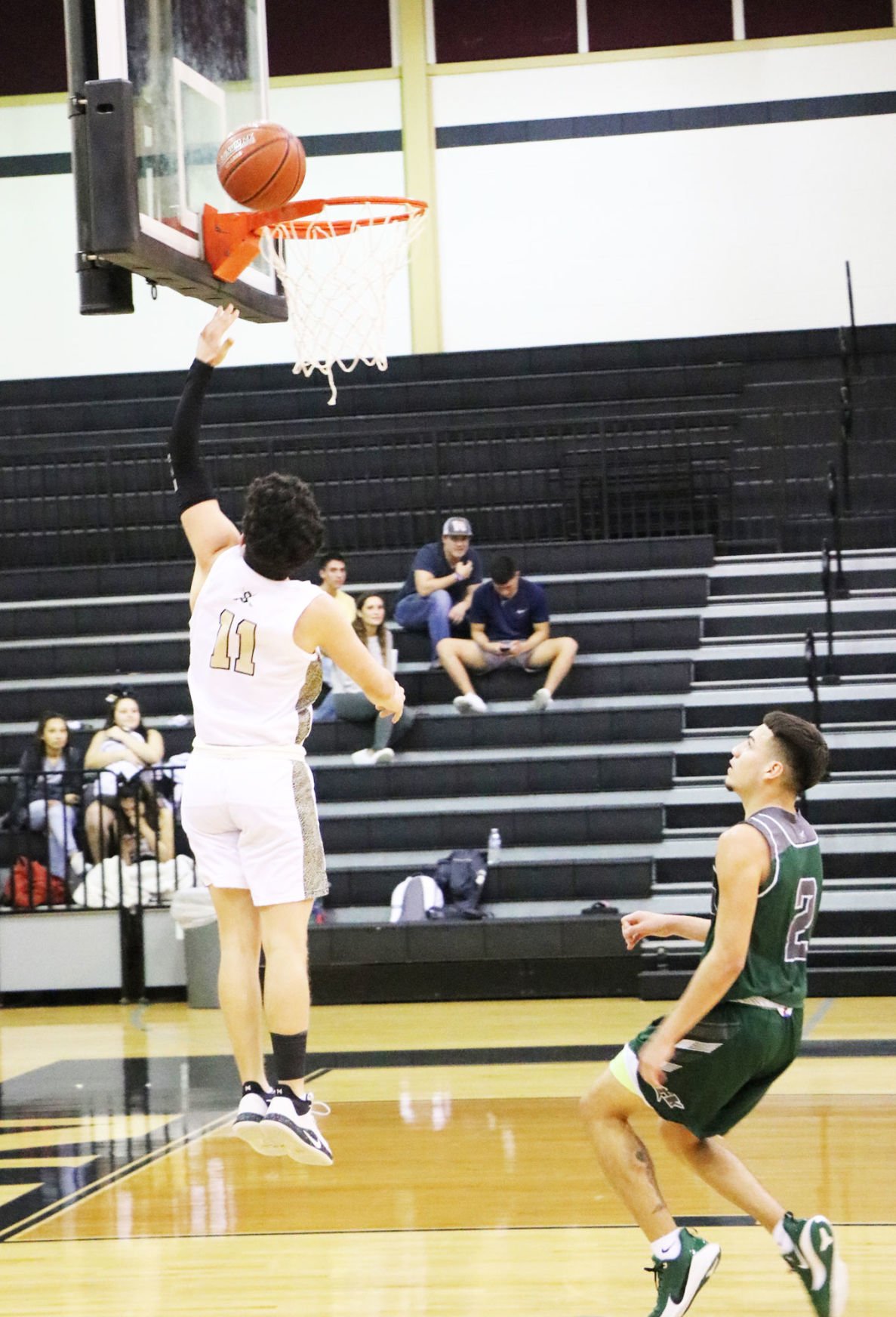 The Matador's Joseph Vela (11) lays it in for two in Seguin's win over SA Kennedy on Firiday night. Vela had 16 points in the second half to help the Mats to the win.

Seguin's R.J. Acuna drives down the lane for two in the Mataodrs' win over SA Kennedy on Friday, Jan. 10, 2019. It was the Mats third district win in a row.

The Matador's Joseph Vela (11) lays it in for two in Seguin's win over SA Kennedy on Firiday night. Vela had 16 points in the second half to help the Mats to the win.

It was a little closer than the coach would have liked.

He did not look happy.

The Mats (3-3, 12-11 overall) struggled with turnovers and shooting in a game that was a one-point spread at the half, and the Rockets hung tough much of the second half, before Seguin went on a decisive run at the end of the third quarter and into the fourth to put the game away.

The Mats struggled from the field and with turnovers in a first half when they couldn’t seem to get into an offensive flow, and led by just a point at the half, 29-28.

“We did a good job limiting their leading scorer, Cliff Lopez, but he hit that shot right before the halftime that was a great three,” Gerlich said. “Kudos to him, that was just a great three that he hit, and they were at one point and we gave them confidence.”

The Rockets took the lead midway through the third quarter on a three-pointer that gave them a 36-35 lead, before the Mats went on the first decisive run of the game.

Gerrit Twitero hit two of his game-high five three-pointers during the stretch and R.J. Acuna penetrated and scored on the inside twice as the Mats went on a 10-3 run to end the quarter and take a 45-39 lead.

The run continued into the fourth, as Chris James hit for three and the Mats got three successive turnovers and turned that into an eight-point run, four each from Twitero and Joseph Vela, to give the Mats some breathing room at 56-43.

“At halftime we talked about it, that we needed to run one of our defenses, where we trap from behind,” Gerlich said. “We needed to do that a little more and not let them get settled in on their offense.

“We buckled down a little bit, the defense kind of picked up. I wish we could have finished the game a little better, but you know a district win is a district win, whether it’s one point or 20 points — we’ll take it.”

Vela came on to score 16 points in the second half, after being held scoreless in the first half, mostly on drives into the paint, and fueled Sequin’s second half run.

“That’s what we talked about at halftime,” Gerlich said. “We do shoot the three ball well, but it wasn’t going in tonight. It was kind of going in and out and they were a little frustrated. I said ‘when it doesn’t go in attack the rim,’ and Vela took that to heart.”

While the rest of team struggled from outside, Twitero made the five threes on his way to 23 points on the night, which matched his season high.

“He’s really gaining confidence and the kids are looking for him,” Gerlich said. “He wants the ball and you can tell that corner three is his shot. We feel real confident that when it goes up it’s going to go in. He’s going to be a real threat coming down the stretch.”

After a difficult start to the district season, with the Mats playing three of the top teams in district and dropping all three, Seguin finds itself back in the playoff hunt with the win.

“We’re back to .500 in district and are back in the thick of the race,” Gerlich said. “We’ve got two huge games next week. They’re not killer games, we’re not supposed to win, but we’re fixing to hit a stretch right here where we’re going to see what we’re made of and teams are going to get our best shot.”

Twitero led all scorers with his 23, Vela had his 16 all in the second half and Chris James had 13 to lead the Mats to the win.

The Seguin girls got their second district win Friday night at Kennedy, 49-42. Cyan Clack led the way with 16 points as the Lady Mats improved to 2-6 in district play and 11-17 overall.

The Navarro girls (4-1 District 30-4A-II, 17-10 overall) got a big win at La Vernia, as freshmen Tatum Harborth and Laylin Sturm had 26 and 19 points respectively. The Lady Panthers led 32-22 at the end of the first half, and outscored La Vernia 27-24 in the second half to preserve the win.

The Marion girls (0-1, 8-16) dropped their first district game of the season, 49-33, to SA Randolph. Lizzie Abrameit had 19 in the loss, but the Bulldogs outscored Randolph 16-3 in the third to keep it close after trailing by 22 at the half.

The Marion boys (10-11) got a non-district road win over Poth, with Ryken Autry scoring 20 and Easton Allen, 16, on five made threes.

The Lifegate boys fell to Annapolis in Corpus Christi, 65-54. Quinten Shellnut had 19 and Zachary McCulloch, 18, in the loss.