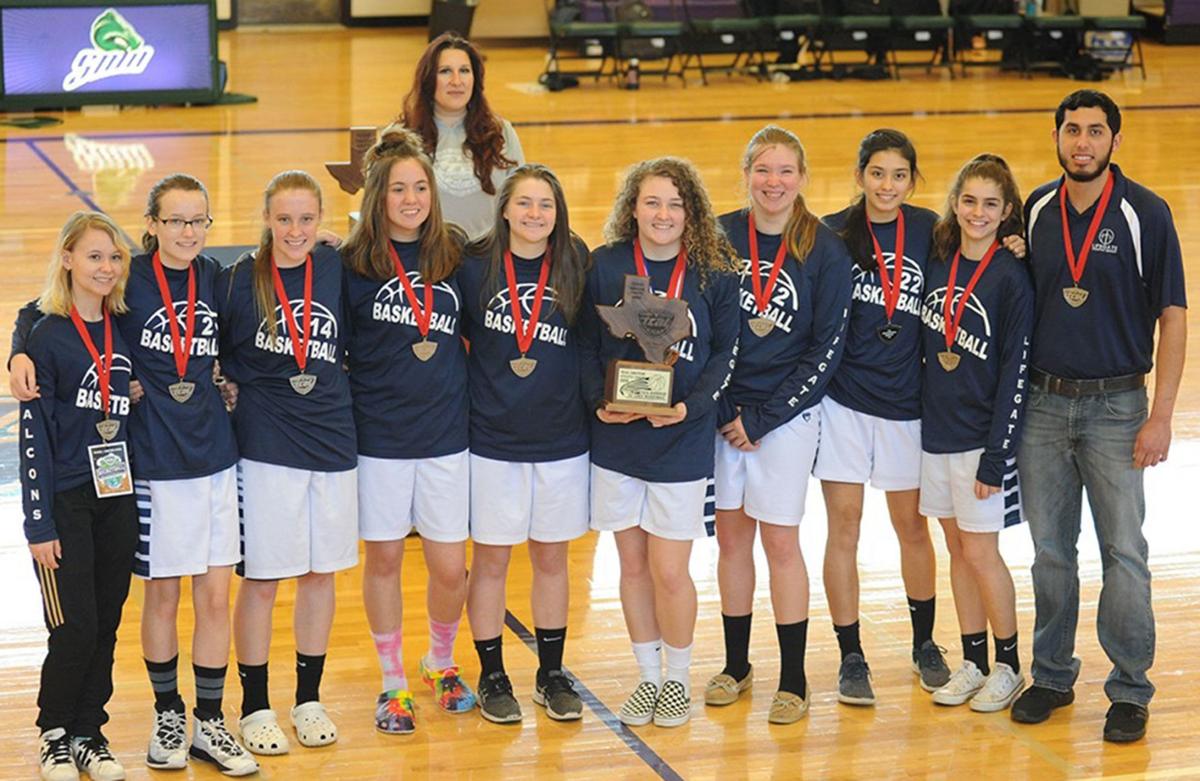 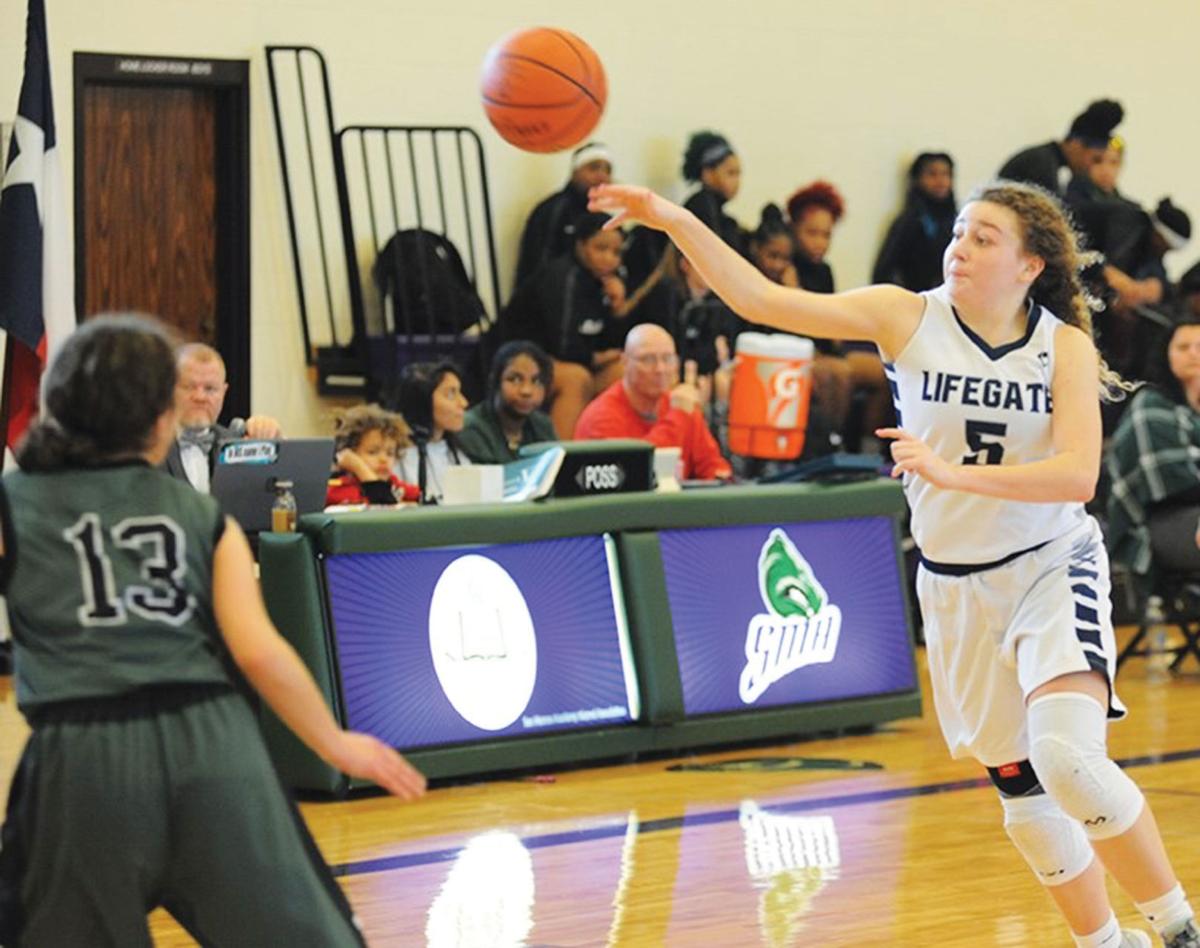 Lifegate's Kayla Hallmark (5) fires a pass at the TCAL 2A state rtournament last weekend. The Lady Falocns finished as the state runner-up after falling in the championship game on Saturday, Feb. 22, 2020.

Lifegate's Kayla Hallmark (5) fires a pass at the TCAL 2A state rtournament last weekend. The Lady Falocns finished as the state runner-up after falling in the championship game on Saturday, Feb. 22, 2020.

The Lifegate Lady Falcons beat the No. 1 seed in the semifinals, but fell to the No. 2 seed in the championship game to finish second at the TCAL 2A state tournament on Saturday.

The boys team lost in the first round, then won two straight before falling by two in the consolation bracket final to finish fourth at the tournament.

The Lady Falcons went into the tournament as the No. 4 seed, and handled the No. 5 seed Humble Christian in the first round with ease, 46-7.

A full court press employed by head coach Gabe Galvan allowed Lifegate to get easy buckets off of turnovers.

“We were more aggressive with that press, created turnovers and got fast breaks on them,” Galvan said. “They got the first basket of the game, but didn’t score again until midway through the second quarter.”

Madisyne Rice had 12, Kayla Hallmark, 11, and Sarinna Skrzycki had eight to lead the Falcons to the win.

That set up the semifinal game against No. 1 seed Bryan Cornerstone and the Falcons pulled off the upset, beating Cornerstone 32-30 in overtime to advance to the finals on Saturday.

“They were head and shoulders above the rest of the field,” Galvan said. “They had beaten the No. 2 seed twice already and had the most seniors, so their experience was huge.”

The game was low scoring, as the coach opted to not press the Cougars.

The Lady Falcons trailed at the half, but got back in it in the third quarter.

“We finally started making shots and slowing them down,” Galvan said. “They had two good shooters on the outside, but Madisyne Rice and Hannah Green did a good job of shutting them down.”

Lifegate took the lead on a loose ball picked up by Green and a layup at the buzzer at the end of the third.

Tied at 28-28, the game went into overtime, and Lifegate outscored the Cougars 4-2 in the overtime to get the upset.

“Our defense on their shooters allowed us to get the win,” Galvan said. “We took them away and forced them to put the ball in the hands of their weakest shooter on the court.”

Green had 10, Rice had nine and Hallmark had eight in the win.

The Falcons fell on Saturday in the championship game, 35-20, to No. 2 seed School of the Woods to come up a game short of the title.

“We hadn’t played against a 1-3-1 zone all season, or at least one of that caliber,” Galvan said. “I would say it was me not having prepared them to play against that defense and when we had open shots we weren’t able to make them.”

Hallmark and Green made the All-tournament team.

Galvan loses only one senior, Hallmark, so will have the rest of the starters back for next season. The Lady Falcons finished the season 8-10 overall, 5-1 against league opponents and the TCAL 2A state runner-up.

The Falcons lost the first game of the tournament to Houston Texas Christian, but played them much closer in a rematch in the consolation final.

The Falcons bounced back with two straight wins in the consolation bracket, beating the No. 6 seed Humble Christian, 59-57, in a tight game.

“We were trailing all through the game until the fourth quarter,” head coach Darryl Smithey said. “I think our overall understanding of the game and what we needed to do, running the offense efficiently in the fourth quarter, through our point guard Quinten Shelnutt and our senior Zach McCulloch, got us the win.”

Lifegate trailed by three at the start of the period, but outscored Humble Christian 19-14 in the fourth for the victory.

That set up the rematch with HTC, and the Falcons figured some things out in a game that went down to the wire.

“We were ahead with about three minutes left in the game and it was back and forth from there,” Smithey said. “We took a three-point shot at the buzzer that hit the rim and lost, 46-44.

“Once you see a team and make adjustments, between myself and the players, we did a couple of things different on defense. It was a more solid defensive effort.”

Shelnutt made First Team All-State and McCulloch made the second team.

The Falcons overcame early season adversity to make the tournament this season.

“I think the season played out pretty much as expected,” Smithey said. “There were some games early on that we could have played better. We had an injury through the first six games of the season (Barson Schmidt), but once he got back on the court that helped us.”

The Falcons were 3-6 when Schmidt returned and went 7-4 the rest of the way to finish the season 10-10 overall, and like the Lady Falcons lose only one senior, McCulloch, for next year’s team.

“The outlook for Lifegate basketball is very positive,” Smithey said. “I look forward to returning next year.”