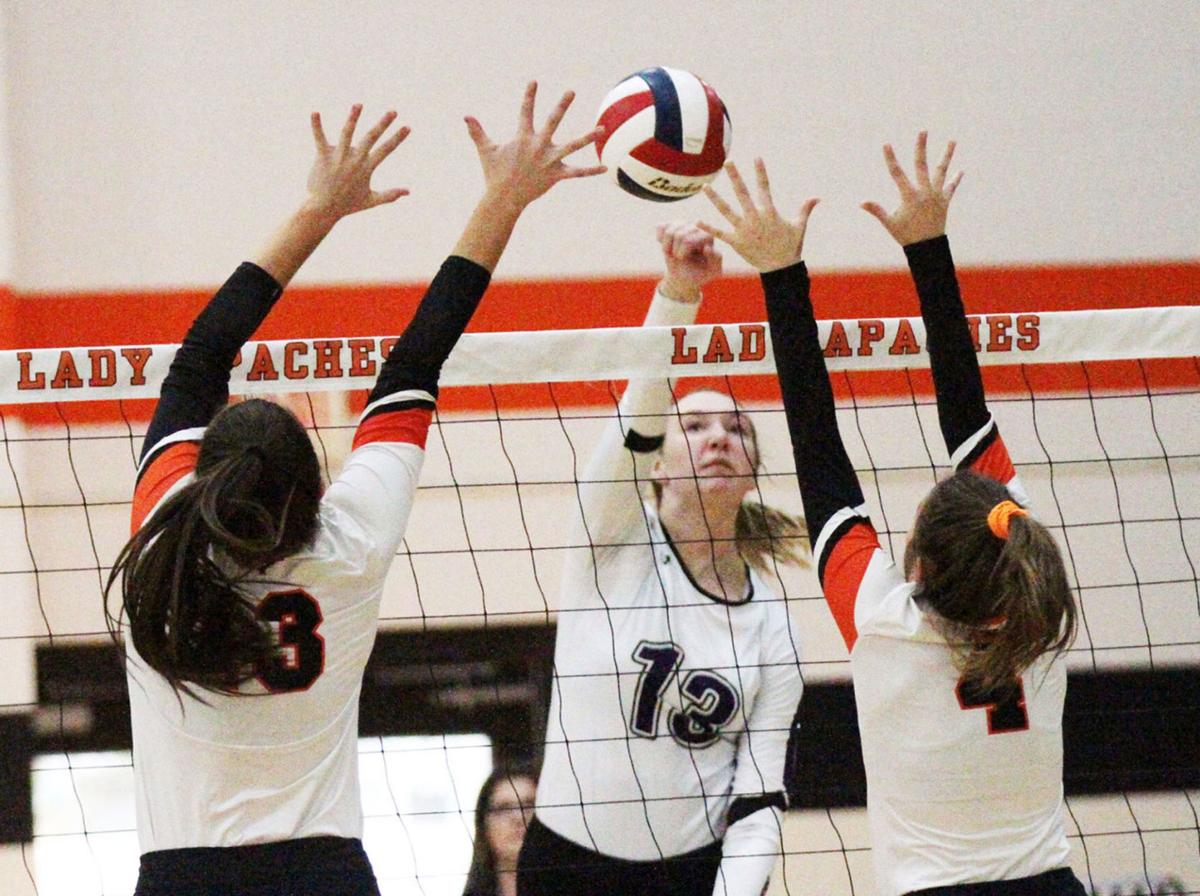 The Lady Panthers' Kelly Helms (13) goes up for a kill in a game last fall. Helms signed her letter of intent to play volleyball at Southwestern last Wednesday. 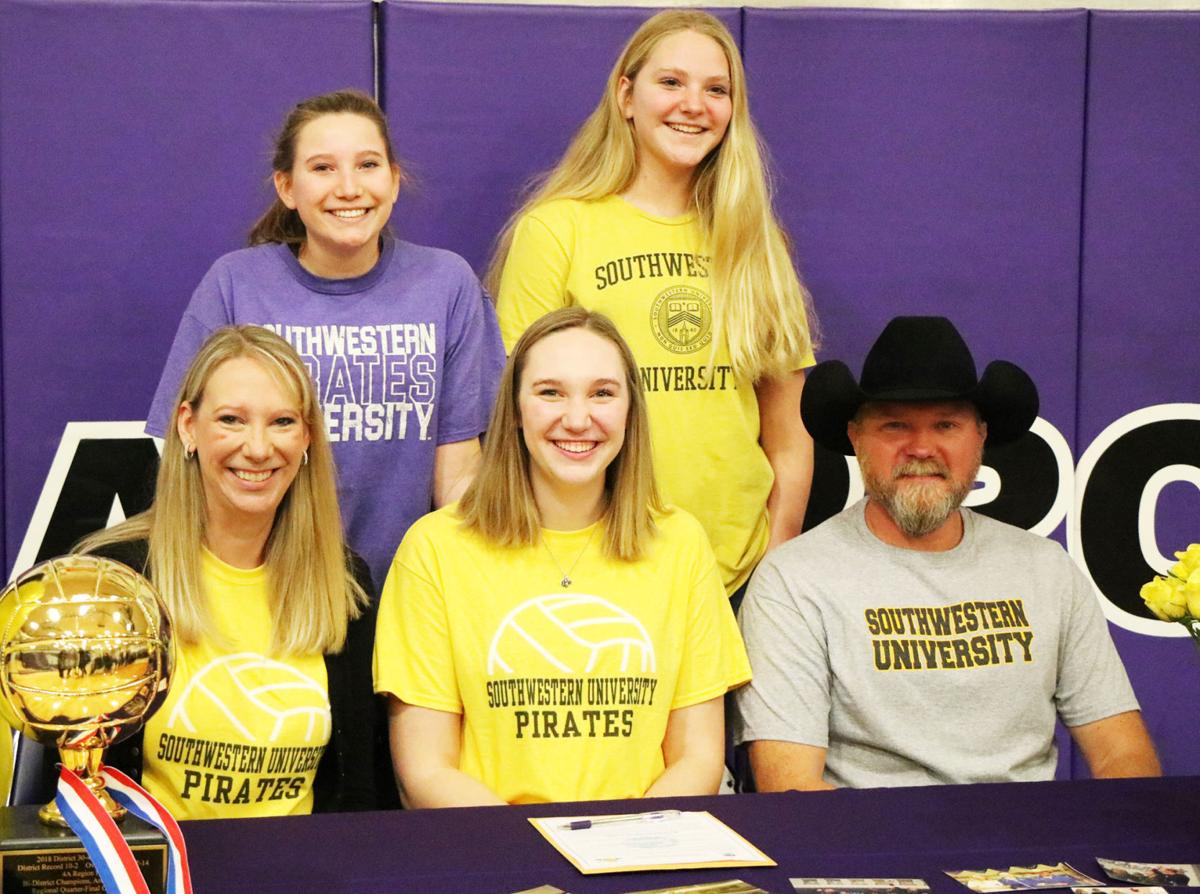 Navarro's Kelly Helms (center) and her family were all smiles as she signed her letter of intent to play volleyball at Southwestern University in Georgetown on Wed., Feb. 5, 2020.

The Lady Panthers' Kelly Helms (13) goes up for a kill in a game last fall. Helms signed her letter of intent to play volleyball at Southwestern last Wednesday.

Navarro's Kelly Helms (center) and her family were all smiles as she signed her letter of intent to play volleyball at Southwestern University in Georgetown on Wed., Feb. 5, 2020.

Anyone that saw the Navarro Lady Panthers’ run to a district championship and the 4A volleyball regional semifinals last fall knows the name Kelly Helms.

The 6-foot-3 outside hitter was a force for Navarro all season long, surpassing 1,000 kills for her career at the school in her senior season and earning numerous district, area and statewide honors.

Helms took over games at times for the Lady Panthers last season, whenever head coach Nicole Blakeman needed her to.

Last Wednesday at the Navarro Events Center, the Navarro senior signed her letter of intent to play volleyball at the next level for Southwestern University in Georgetown.

“She’s a standout on the right side with her ability to hit and provide such a huge block,” Blakeman said in her introduction of Helms. “Even though she’s one of the most highly awarded volleyball players in Navarro history, she’s also an asset in the classroom, being No. 2 in her class, and was a stabilizing presence and tremendous leader for us in volleyball.”

Helms decided on Southwestern after checking out a couple of other offers she had to play in college.

“I’ve been searching for colleges that I was interested in since freshman year, and kind of narrowed it down to a couple my junior year,” she said. “I had a couple of offers, but in the end I found Southwestern.”

Her coach on her club volleyball team helped get her in touch with the school.

“She talked to them and we went up and visited, and we just fell in love with the campus, the coach, the team and the academics,” Helms said. “We’re so happy.”

The reputation for the academics at the school was a major factor in her choice.

“Academics are really big to me,” Helms said. “That’s one of the reasons I wanted to go to a smaller school, so I couId go in and really focus on that. I worked really hard in high school and am going to be second in the class, so I really wanted to go into college and be successful and graduate with my business degree.”

Helms was the leader of the team that finished the year just two games short of the state tournament, earning a special nickname on the team.

“As a player, it’s going to be a gaping hole that we’re going to need to fill,” Blakeman said. “Not just for her volleyball ability, but for the other things she provided, like the team leadership. She was called ‘Mother Goose’ because she was that stabilizing influence for the team, especially for the younger kids.”

Her physical attributes notwithstanding, Helms’ volleyball I.Q. was off the charts, Blakeman said.

“She’s a very smart player and would help the other players see the holes on the floor,” the coach said. “She was our cheerleader, led the offense and sometimes carried our offense. She was one of the main reasons we were as successful as we were.”

Helms played all four years on varsity for Navarro, the only freshmen to play varsity when she started four years ago.

“Freshman year, I was the only one in my class (to start) with coach (Phyllis) Fowler,” she said. “We went to state and got third in state. We had some really strong seniors that year that led us to that point.”

Blakeman took over for Fowler Helms’ sophomore year and the team reached the regional semifinals, as it did her junior year and last season.

“We’ve seen a lot of success in my time here,” Helms said. “We were disappointed this year that we only got to the regional semi’s, but we had to remind ourselves it was a huge thing. So many teams don’t make it that far.”

Helms believes that her skills will translate well to the next level.

“I’ve worked really hard and I’ve worked with other coaches, gone to some college coach camps and played on the club team,” she said. “I think I’m ready, I just need to keep working hard.”

She’s had discussions with the coach at Southwestern a couple of times a month since she made the decision to go  there.

“He’s been really helpful, asking me what’s going on, what’s up with my practices and how they’re going to use me up there,” Helms said. “If I work hard, I should be able to fit right in.”

Coach Blakeman is looking forward to seeing Helms play in college and thinks the school couldn’t be more fitting for Helms.

“I think Southwestern is a perfect fit for Kelly, because it’s academically strong and she’s a very good student,” Blakeman said. “And Southwestern will be a good place for her to play volleyball.

“I’m excited for her, she’s close enough to go and watch and I think her best volleyball is front of her.”