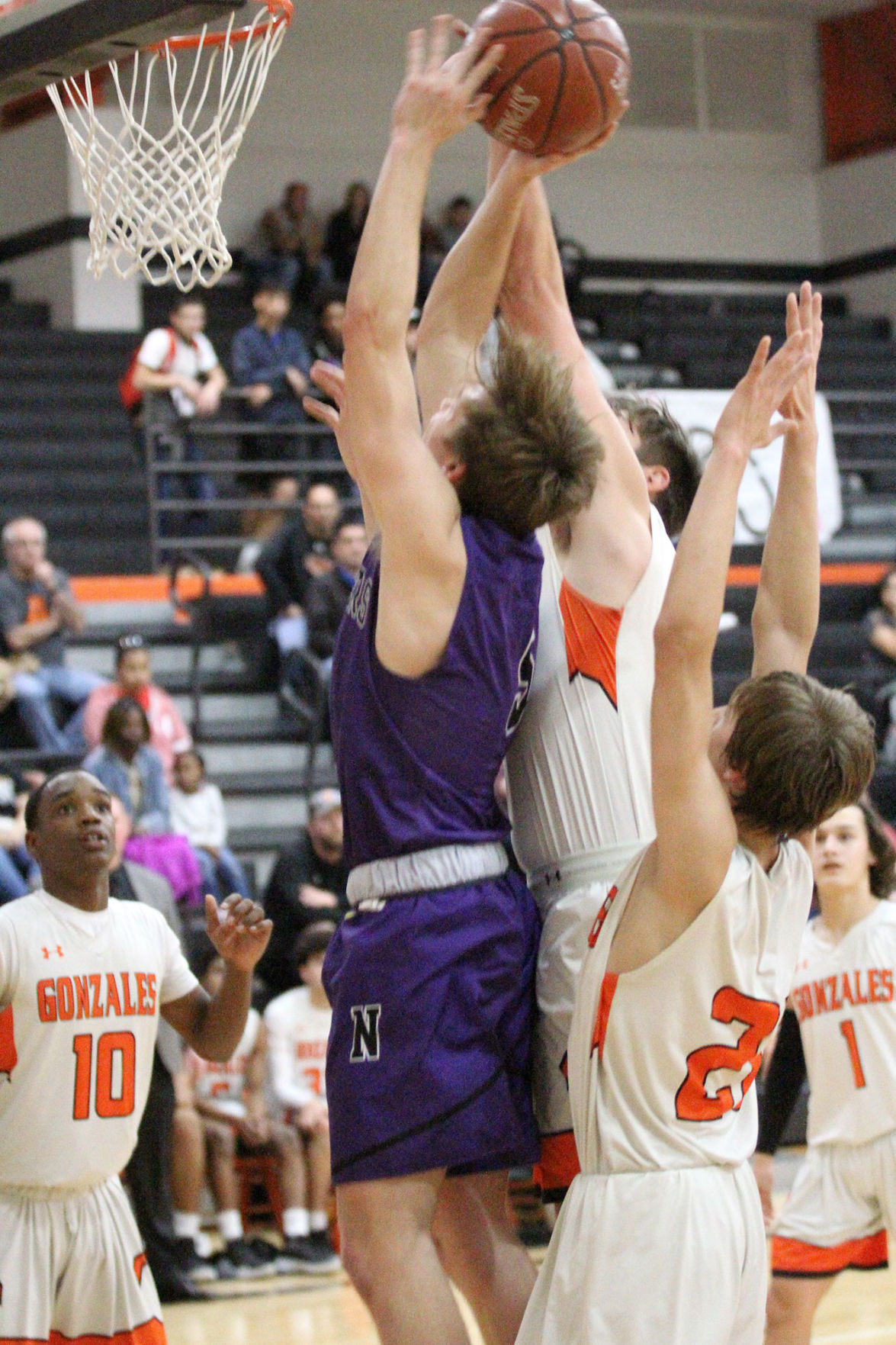 Navarro's Josh Linton takes it to the rim in the Panthers' loss to Gonzales on Friday, Jan. 31, 2020.The Panthers fell into a tie with the Apaches at 5-3 in district play. 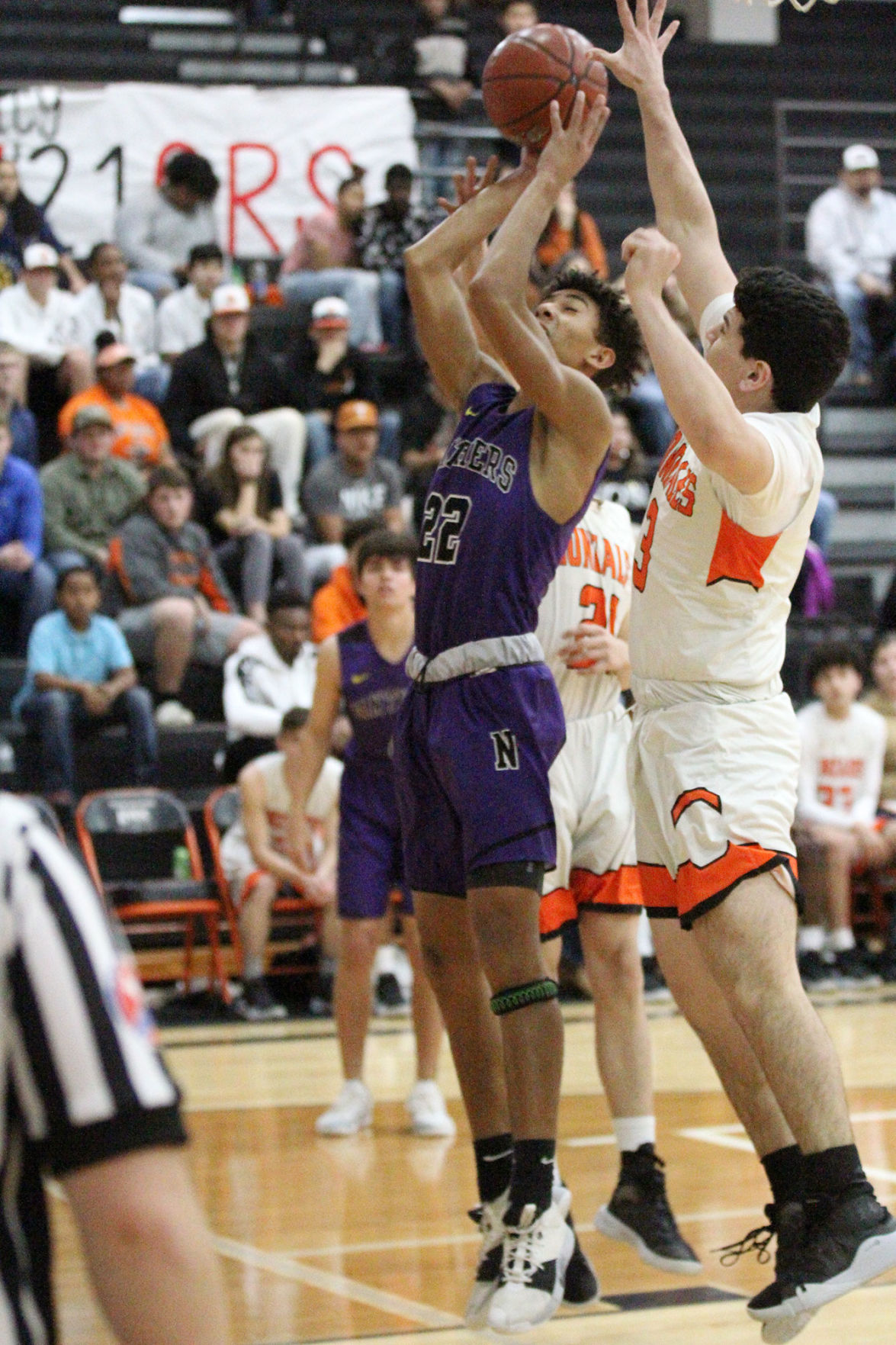 Navarro's Preston Grobe goes up for two in the Panthers' loss to Gonzales on Friday, Jan. 31, 2020.

Navarro's Josh Linton takes it to the rim in the Panthers' loss to Gonzales on Friday, Jan. 31, 2020.The Panthers fell into a tie with the Apaches at 5-3 in district play.

Navarro's Preston Grobe goes up for two in the Panthers' loss to Gonzales on Friday, Jan. 31, 2020.

A second half run from the Navarro Panthers had just got them back in the game.

The Panthers had stormed back from a 13-point halftime deficit to close the game to within a point (52-51), with just under three minutes left in the game.

But two dagger threes from the Apaches in the next minute of the contest allowed them to close out Navarro for a 64-55 win, in a game that threw the District 30-4A playoff race into chaos.

The Panthers had trouble scoring in the first half, managing just 18 points with about three minutes left in the second quarter, but still down by just four at 22-18.

“We just kind of got away from what we do in that first half,” head coach John O’Dell said. “We want to take care of the ball, move the ball and look for open people, we didn’t do that. We were taking some bad shots in the first half.

“But the kids came back with a great effort in the second half — we got back to taking the shots as they came to us and that was better.”

But the Panthers outscored Gonzales 14-8 in the third quarter, getting points from five different players after turnovers generated by the press, and were back in the game, 41-34.

“We try to do a good job of keeping the pressure on people on hoping they make mistakes,” O’Dell said. “We did a little too much reaching, but we’ll talk about that and hopefully it will come out better next time.”

The Panthers came out hot in the fourth quarter, getting three threes, two from Ian Osborne and one from Cooper Guetzke, and two more buckets from Guetzke, as they fought back form the seven-point deficit.

Reese Rojas would get the Panthers back within one with a couple of free throws, then after Gonzales hit a three, hit two more to keep Navarro within two at 55-53.

But the Apaches answered with another three, their second within a minute, to push the lead back to five, 58-53 with 1:40 left.

“That’s just the game of basketball,” O’Dell said. “Sometimes they’re going to hit them and sometimes they’re not. They miss those two and we’re back in it and maybe on top, but it didn’t happen that way.”

The Panthers turned it over and gave up a layup on their next possession as the Apaches went up by seven.

Forced to foul, Navarro sent the Apaches to the free throw line with time running out and the Gonzales made four in a row to ice the game.

Osborne led the Panthers with 13 points, including the two made threes in the second half. Guetzke had nine points in the fourth quarter, all coming after he went down with an apparent knee injury after taking a really hard foul in the third.

“Every game is a big game for us,” O’Dell said. “We’re going to worry about La Vernia, La Vernia only, then will think about somebody else after that.”

Love the coverage, for Navarro!