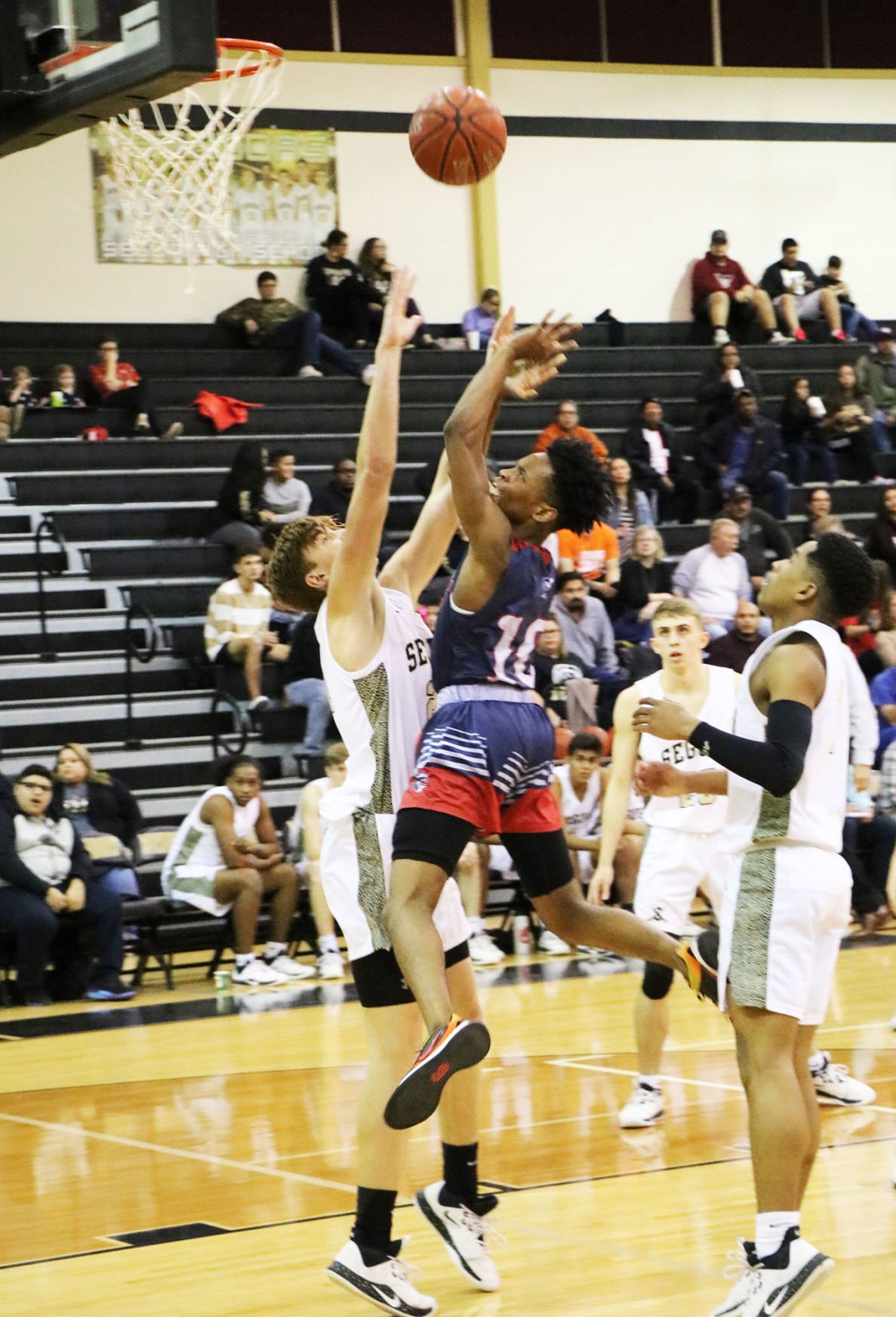 Seguin's Kaleb McCann plays defense at the rim for the Matadors in their 58-50 win over Veterans Memorial on Tuesday, Jan. 21, 2020. The iwn moved Seguin into the last playoff spot in district with seven games left. 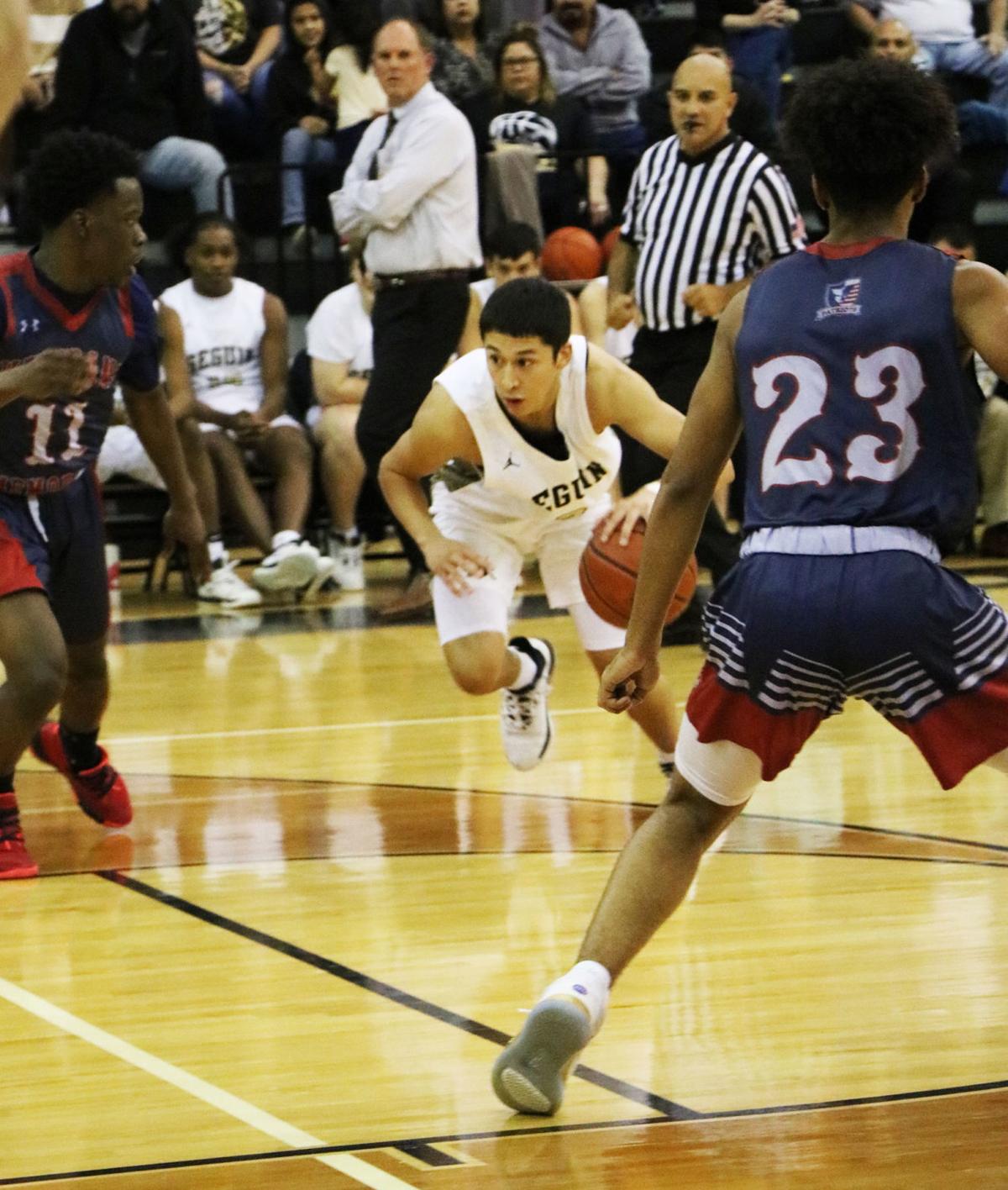 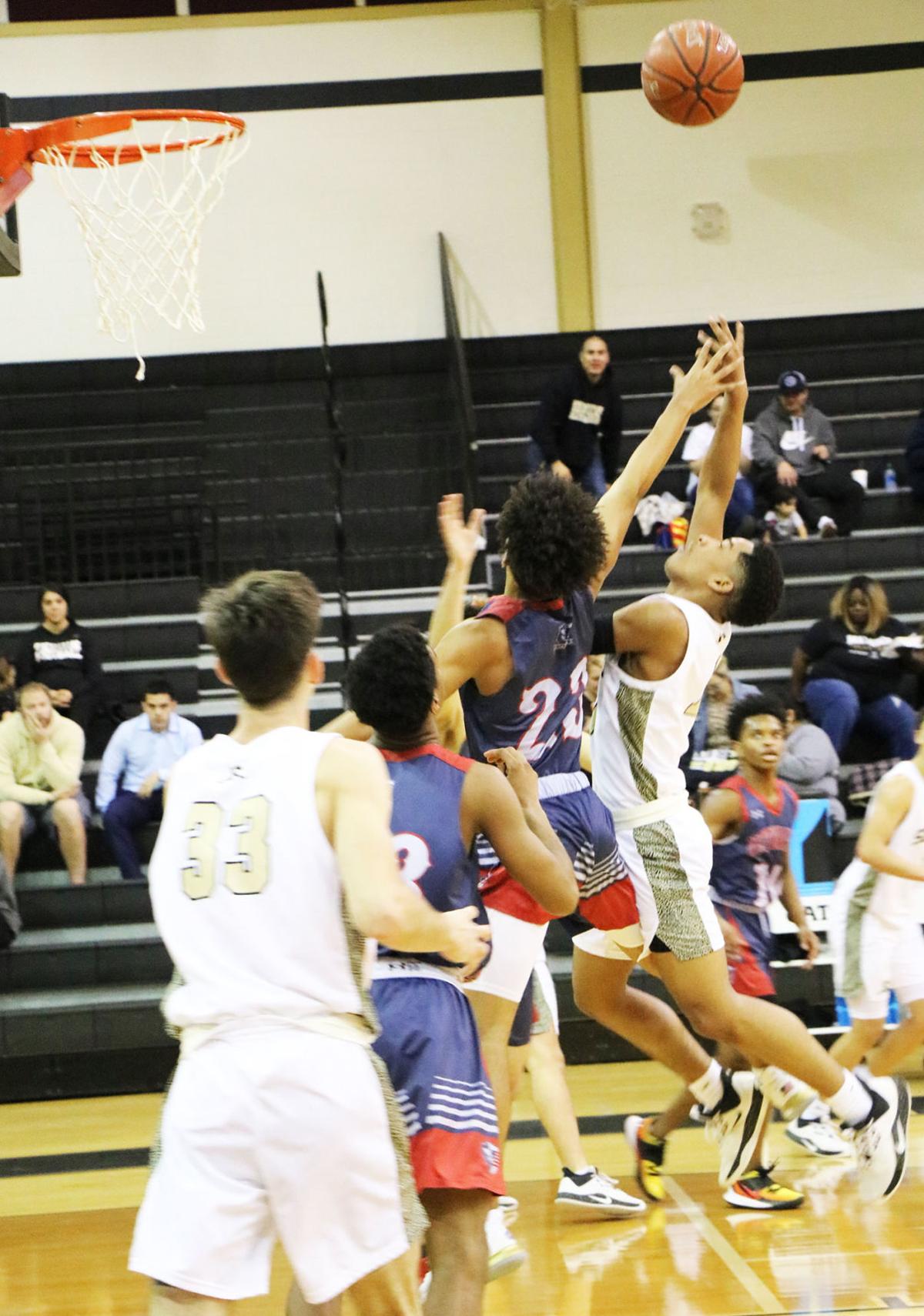 Seguin's Chris James puts up a floater in the lane during the Mats' win over Veterans Memorial on Tuesday, Jan. 21, 2020.

Seguin's Kaleb McCann plays defense at the rim for the Matadors in their 58-50 win over Veterans Memorial on Tuesday, Jan. 21, 2020. The iwn moved Seguin into the last playoff spot in district with seven games left.

Seguin's Chris James puts up a floater in the lane during the Mats' win over Veterans Memorial on Tuesday, Jan. 21, 2020.

For the Matadors playoff chances, this win was huge.

Seguin came into Tuesday night’s game tied with Veterans Memorial for fifth place in the District 26-5A standings, both teams at 4-4, and looking up at four teams above them for the four playoff spots out of the district.

A loss would have dropped the Mats to sixth in the district, at least two games out of that fourth spot.

And for a little while in the third quarter, it looked like the Patriots were the better team, as they shut out the Matadors for most of the quarter and built an 11-point lead (39-28) with just 1:27 left in the period.

But then … the lid came off the basket.

Seguin went on a 22-3 run over the next four minutes of the contest, in a stretch that saw four made three-pointers from Chris James and Joseph Vela, and the Mats would go on to take the game, 58-50.

“That’s actually a little quick hitter we run over there for Vela,” head coach Dwayne Gerlich said. “They left him open both times and he drained both of them.

“It could have easily gone the other way, but we trust our seniors right now — when you’re open, shoot it. He did and we got two threes out of it. It was a big help to get us over the hump and get some scoring going.”

It was the Matadors (5-4, 15-12 overall) fifth win in the last six games, as they held the Patriots to just 11 points in the fourth quarter, creating turnovers during the decisive stretch and getting points off those turnovers.

“I know sometimes we didn’t play a whole lot of people in the second half,” Gerlich said. “But what a great defensive effort for the win. It was definitely a team effort, I think we had four guys in double figures tonight. For us to be effective we have to have everybody involved.”

The win moved the Mats into fourth place in the district, a half game up on Boerne Champion (4-4), which dropped a game to Harlandale Tuesday night.

Seguin outscored the Patriots 22-11 in the fourth quarter, hitting 10-12 free throws to maintain the lead when Veterans Memorial was forced to foul.

“Free throws are a big part of our game right now,” Gerlich said. “We have good shooters and in a big game like this they’re pretty good at focusing and knocking shots down.”

R.J. Acuna carried the Mats in the first half, keeping them in the game with several great moves to the hole and a couple of outside jumpers to score nine of his 13 points in the first quarter.

The game was a big bounce-back win for the Matadors, who lost their first game in three weeks last Friday to SA Wagner, 81-49.

“Wagner is like a snowball out of control right now,” Gerlich said. “They’re very intense, they’re athletic and very big and right now they’re like a runaway train.

“For us and our playoff chances, we’re done with them. So I hope they beat everybody they play the rest of the season. It felt good tonight that the kids bounced back after a tough loss.”

To beat the team they were tied with going into the game was big for the Mats.

“It’s huge, we have to protect our home court,” Gerlich said. “We have to play them twice, so we have to get that win at home.”

The Mats travel to Boerne Champion for another crucial contest Friday night for a 6:30 p.m. tip.

The Marion girls also beat Ingram, 54-42, as Lily Bek and Molly Rooke had 17 and 14 points, respectively, to lead the way. The Bulldogs got their first district win to improve to 1-2 and 9-18 overall.

The Navarro girls improved to 6-1 in District 30-4A-II and 19-10 overall with a 65-40 win over Poteet. Freshmen Laylin Sturm and Tatum Harborth had 17 and 16 for the Lady Panthers, who trail district leader Gonzales by just a half game for first place in the district.

The Navarro boys are on a roll in district too, moving to 4-1 (13-11 overall) with a 77-48 win against Poteet. The Panthers are tied with La Vernia for second in the district, trailing undefeated Pleasanton by a game.

The girls and boys travel to Pleasanton on Friday night.

The Seguin girls lost to Veterans Memorial, 54-28, to fall to 2-9 in district and 11-20 overall. The girls host Boerne Champion at Goldie on Friday.

Kevin Duke is the sports editor at the Seguin Gazette. You can email him at sports@seguingazette.com.