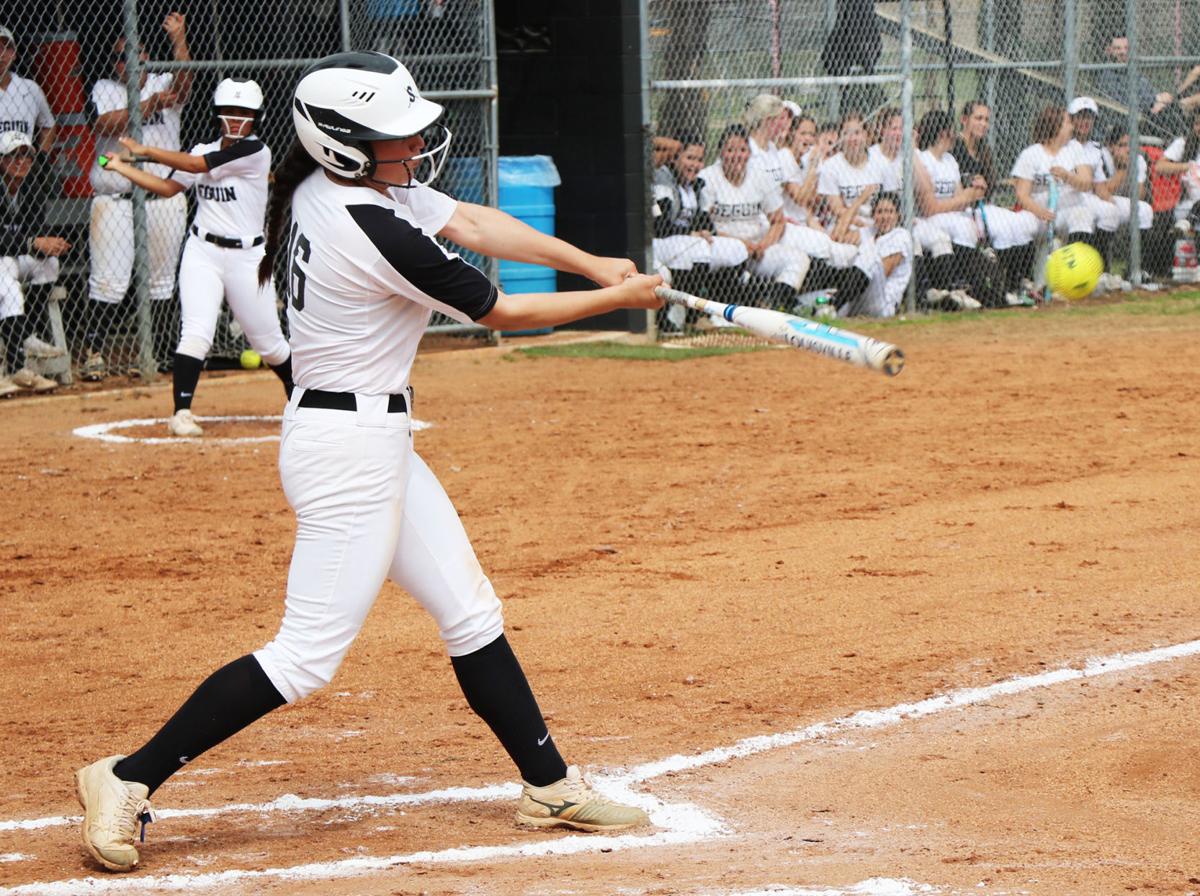 Seguin's Marissa Bradley (16) stokes a pitch for a base hit in the Lady Mats' run-rule win over Harlandale on Tuesday, March 10, 2020. 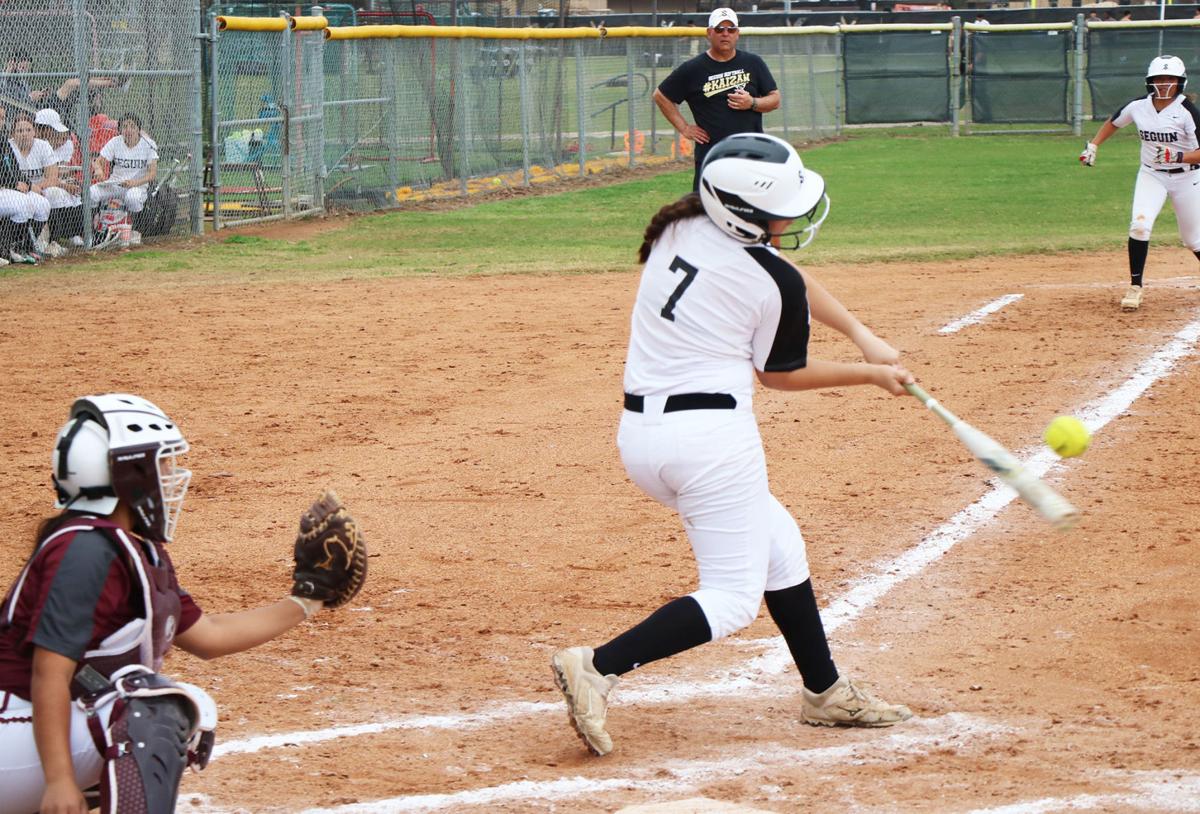 Seguin's Marissa Bradley (16) stokes a pitch for a base hit in the Lady Mats' run-rule win over Harlandale on Tuesday, March 10, 2020.

It seems the Lady Mats have struggled with these contests in the 14 years he’s been the coach at Seguin.

“We talked that we had that grind of last week, then you’ve got the kid’s mind of Spring Break, time off, relax, have fun,” Garcia said. “These girls have to come up here, work hard and play ball. It was big for us that they were able to stay focused and get the job done.”

The Mats got it done all right, sending 13 batters to the plate in a seven-run first inning on the way to a 12-2 run-rule win over Harlandale Tuesday afternoon at Seguin High School.

“I was pleased with the first inning,” Garcia said. “After that not so much — in a sense that we went out that first inning and put good bat on the ball, made good choices and did the things we talked about.

“Then we got a little greedy, a little anxious, weren’t patient and swinging at 2-0, 3-1 counts that should be hit hard somewhere — and we’re hitting weak grounders and pop ups. We’ve got to get better on our selection throughout the game, not just when we’re having a good inning.”

Marissa Bradley got it started innocently enough in the first inning, with a liner toward first base that was almost caught, but fell out of the Harlandale infielders glove when the glove hit the ground. An Ashlynn Flores walk was followed by a Madaline Bone infield grounder to put runners on the corners with one out.

McKenzie Neumann then had the at bat of the game, fouling off about seven or eight pitches before launching one that rolled to the fence and scored Bradley from third.

“That’s what you would expect from a four-year starter who’s a senior,” Garcia said. “That’’s what we teach — with two strikes you’ve got to battle and foul everything off, and eventually you’re going to get that pitch that you can get good bat on the ball.

“That’s what she did, it’s a good example of that and sets the tone for all the young ones to see that.”

Layla Salazar got a perfect bunt down to load the bases, before Allison Kubena cracked a base hit to score two runs and an errant throw brought in the third as Seguin took the 4-0 lead.

Taylor Springs kept it going with a liner to right center that rolled all the way to the fence, and Kubena scored to make it 5-0.

Mia Cevallos got the final base hit of the inning, driving in the last run to make it 7-0, as the Mats collected eight hits in the frame.

“That is a pleasant surprise and we’ll take it any inning we can get it,” Garcia said. “They did a great job with their pitch selection and keeping their head on the ball and getting the base hits by hitting them where they weren’t.”

Seguin would add another run in the second and three more in the third to for the 11-0 lead, before the Lady Indians got on the board with two runs in the top of the fourth. A run in the bottom of the fifth secured the win for the Matadors.

Bradley picked up the win from the circle, scattering three hits over five innings and giving up just the two runs in the fourth on a couple of successive hits from Harlandale.

“She had some trouble hitting her spots, but came back in the next inning, didn’t hang her head about it and got the job done,” Garcia said.

The Mats improved to 4-1 in District 26-5A and 16-7 overall — a hot start going into their bye on Friday. Seguin played eight games in five days since last Thursday.

“We’ve had a grind this week, so they’re going to get some time off,” Garcia said. “It’s well-deserved, they’ve worked hard and earned it and are a good group of kids.”

Seguin is done with tournament play for the year — only district games on the usual Tuesday, Friday rotation remain for the rest of the season.

“Now we can kid of sit back and relax little bit,” Garica said. “We’ll have some time to recover, where being tired won’t be as much of an excuse any more.”

For the game, Kubena led the way with four RBI’s, while Cevallos and Flores knocked in two runs each. Madaline Bone was 3-4 at the plate with a run scored and an RBI. The Mats got hits from nine different players and 10 players scored in the win.