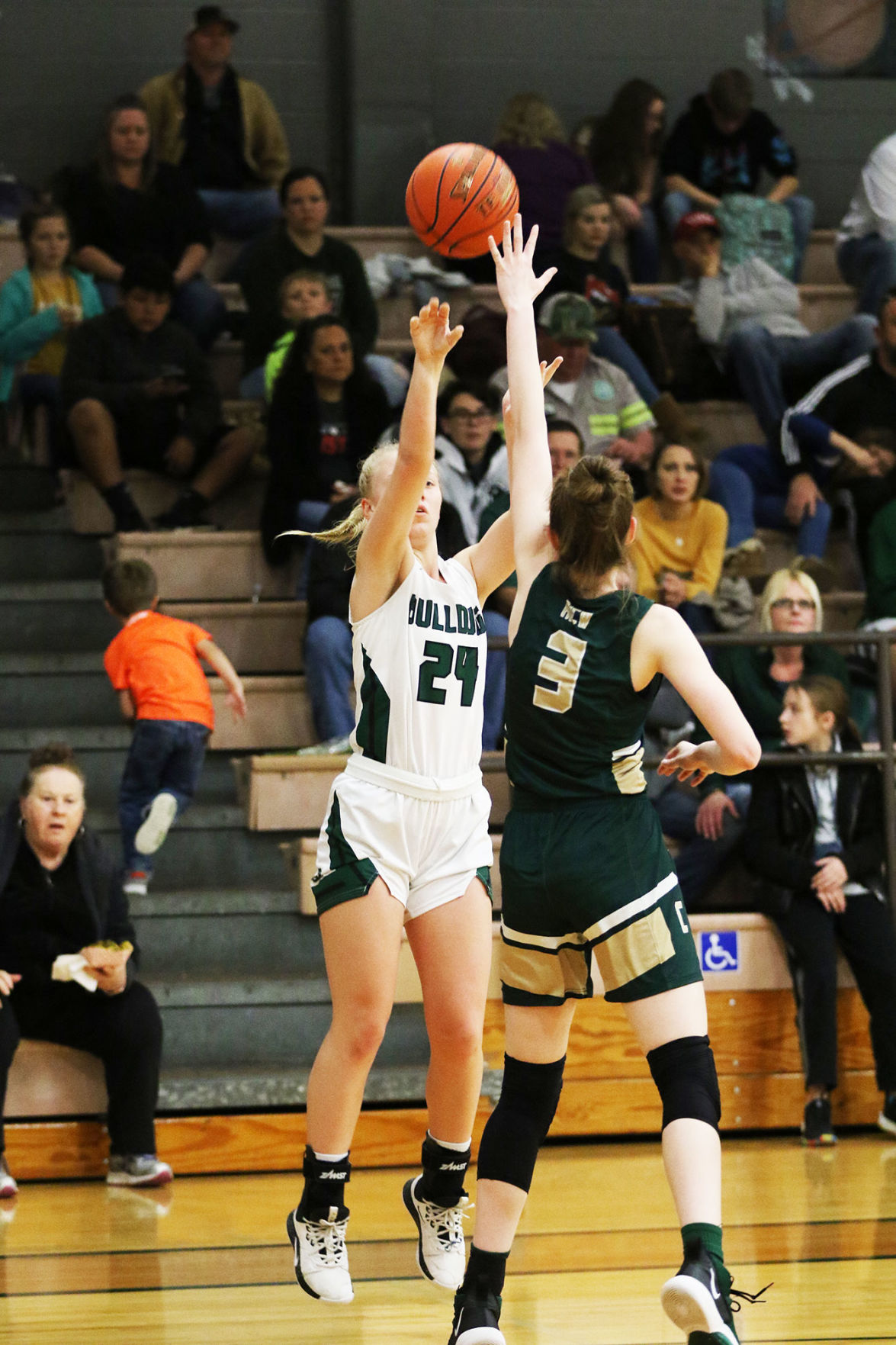 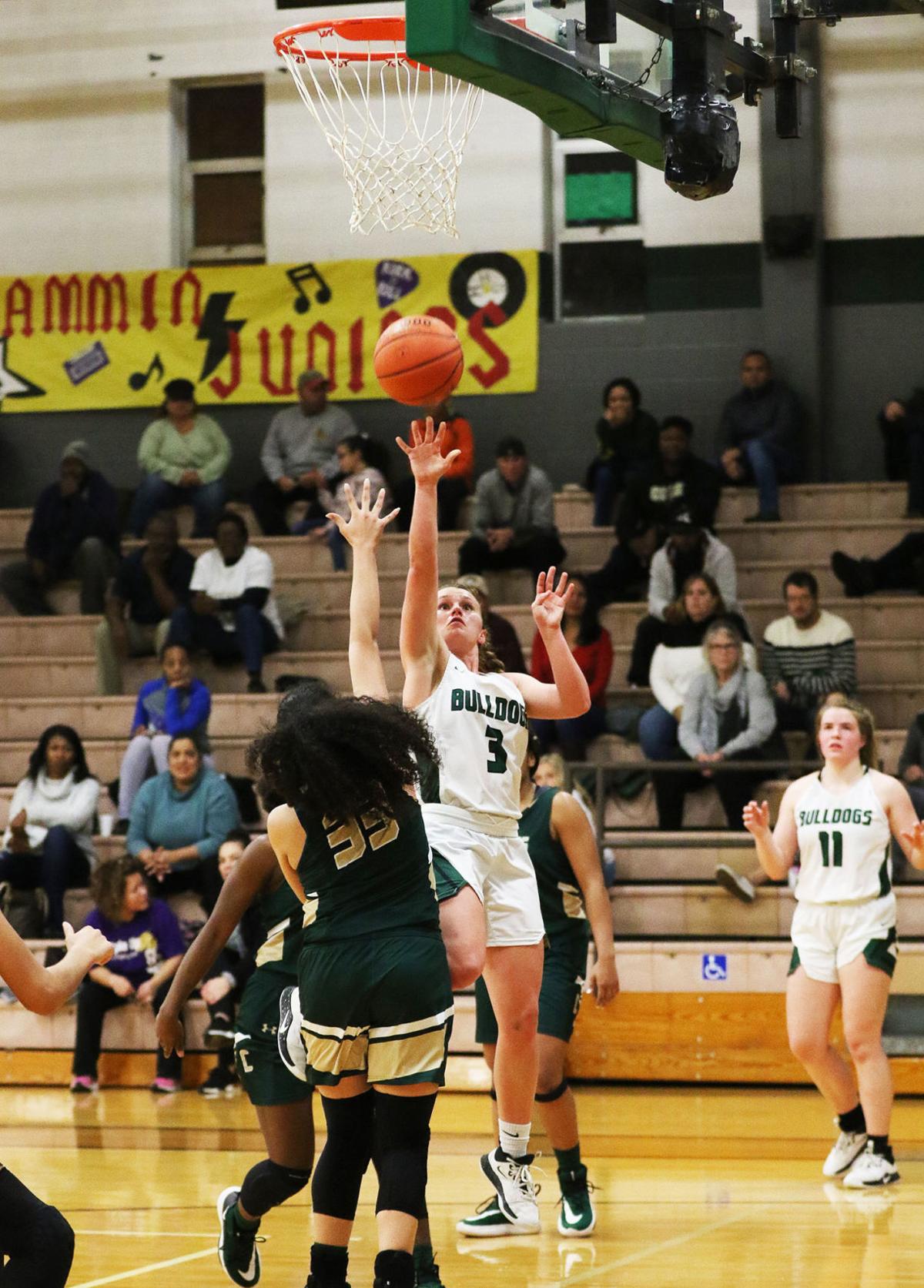 Marion's LIly Bek drives in for two in the Bulldog's win over SA Cole On Tuesday, Feb. 11, 2020. Bek had two free throws to ice the game with nine seconds left in the contest. 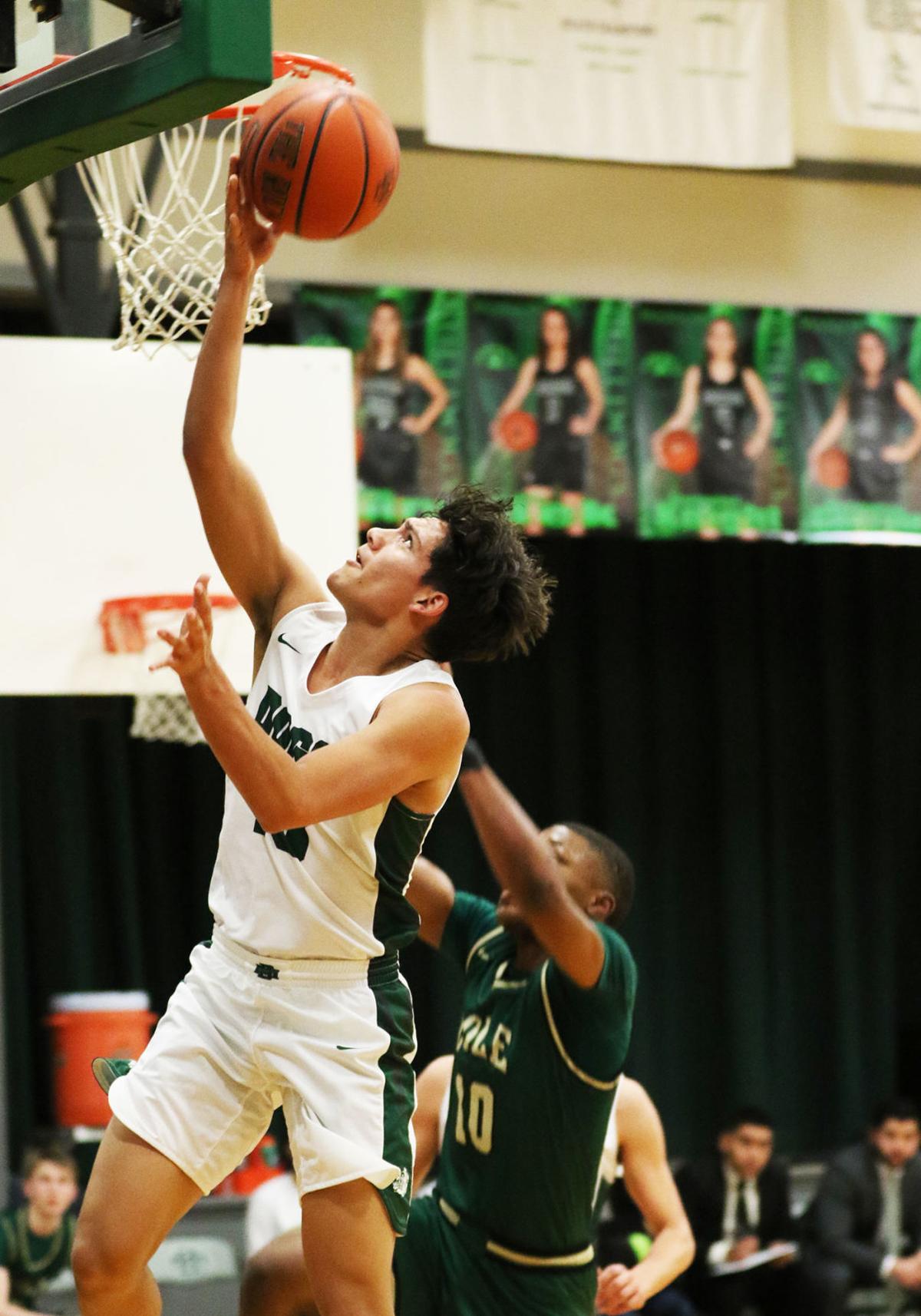 Marion's LIly Bek drives in for two in the Bulldog's win over SA Cole On Tuesday, Feb. 11, 2020. Bek had two free throws to ice the game with nine seconds left in the contest.

MARION — San Antonio Cole is currently the No. 3 ranked 3A boys team in the state.

How they are not No. 1 is anybody’s guess.

The Cougars visited Marion on Tuesday night for a 26-3A contest with the Bulldogs, after Marion had kept the game at Cole earlier this season within reach for three quarters.

That would not be the case Tuesday night.

The Cougars, behind 6-foot-11 sophomore Vince Iwuchukwu, turned a seven-point lead into a 20-point cushion over three minutes in the second quarter, and coasted from there to beat the Bulldogs, 72-47.

Iwuchukwu was virtually unstoppable under the basket, catching, turning and dunking at will (six times) — but also made two three-pointers and all four of his free throws on his way to 22 points.

“That’s a pretty good team over there,” Marion head coach Jon Allen said. “I fully expect to see them in the state tournament.

“There’s really nothing we could do with him, we just tried to work on what we work on and play hard.”

Iwuchukwu got a lot of help from a supporting cast that knocked down shots and broke free on fast breaks as the Cougars built the lead with a 13-0 run to start the second quarter.

“Last time we played them we hung with them into the third quarter before they pulled away,” Allen said. “This time they hit a few more shots in the first half and kept the lead on us.

“I’m proud of our kids for how they fought. We’re not as talented as them by any stretch — but we never gave up, we never quit playing and that’s what I want to see out of us right now.”

Ryken Autry scored 21 for the Bulldogs as the only player in double figures, hitting five of his eight three-pointers on the night.

Marion has two games left, sitting at 3-5 (13-16) overall) in district play. The Bulldogs face SA Randolph on Friday and SA Gervin next Tuesday, with the fourth and final playoff spot out of District 26-3A on the line.

“We’ll treat the game on Friday like a playoff game, and then when we get to Gervin it will be the same,” Allen said. “Gervin is the one we have to win, but of course we would like to beat Randolph on Friday.”

If the Bulldogs beat Gervin, which has just the two wins over Ingram in district play, they will make the playoffs.

“We won’t see competition like that the rest of the season, or even in the first two rounds of the playoffs,” Allen said. ”Our goal would be to meet Cole again in the third round of the playoffs.”

The Bulldogs came back from a six-point deficit at the start of the third quarter, mostly by drawing fouls and hitting free throws, to beat SA Cole 44-41 on Tuesday night.

Marion scored 16 of its 24 points in the second half from the charity stripe, including three of four in the closing seconds of the game, to hold off the Cougars and split the season series.

Coach Kollyn McWhinney noted the Bulldog’s defense as the key to the win.

“I’m so proud of our defensive effort tonight,” McWhinney said. “We played with a lot of intensity, put a lot of pressure on their point guard and really kept the ball out of her hands.”

“We had her force a few things when she was able to get it — and it took them out of their rhythm.”

The Bulldogs hit 9-10 free throws in the third quarter, including six straight from Lizzie Abrameit, before finally getting the first bucket of the second half from Sarah Cook to take a two-point advantage (34-32) into the fourth quarter.

“Lizzie did a great job of getting to the free throw line and then knocking them down when she got there,” McWhinney said.

The Cougars came back to tie it at 38-38, before two straight fouls on Cook and Abrameit resulted in a three-point advantage with three minutes left in the game.

Guard Lily Bek may have made the play of the game with 13 seconds left. The shortest player on the court, Bek grabbed an offensive rebound off of a Molly Rooke miss from the free throw line and was fouled with the Bulldogs up by two.

Bek calmly stepped to the line and drained both to give the Bulldogs a four-point lead, 45-41, with nine seconds left in the game.

“That was huge,” McWhinney said. “Lily is an energy player, she doesn’t know any way to play other than 100%. Between her and Cheyenne Dickey, they locked down No. 10 for Cole after the first quarter.

“She’s just an effort player and does not know any speed other than full out.”

The Bulldogs hit the free throws in the third, struggled with them through the fourth, before hitting the crucial three free throws at the end of the game.

“We struggled early with our shooting but we just kept working and eventually they started to fall,” McWhinney said. “Then we went through a stretch where we weren’t making our free throws, but we hit them at the end when it mattered.”

McWhinney got contributions from the bench in the second and third quarters, while the starters were struggling to hit shots.

“We had quite a few girls that scored tonight,” she said. “We got a nice lift off the bench and that was big for us tonight.

Abrameit had 13, Rooke had 12 and Cook had seven for the Bulldogs, while five others scored at least once in the contest.

Marion finishes the District 26-3A season tied with Cole for the third seed out of district. Tiebreaker details were supposed to be worked out sometime on Wednesday and the Bulldogs’ first playoff game will be either next Monday or Tuesday night.

Gerrit Twitero had 21, Chris James had 18 and Joseph Vela had 11 as the Mats built on a nine-point halftime lead with a 20-5 third quarter to win in San Antonio.

That makes Friday’s contest at Tivy (9-5) huge for the Mats. If the Mats win they’re tied with Tivy with the head-to-head tiebreaker with one game left (at Veterans Memorial), a loss would eliminate them from playoff contention.

The Seguin girls got their third win in a row to close out the season at Goldie, beating SA Kennedy 69-22. Tresalyn Roberts had 24, Liv Hernandez had 12 and Kaitly Ranft and Reese Brittain had nine points apiece.

Tatum Harborth had 19, while Laylin Sturm and Haleigh Ortiz chipped in with nine each as Navarro led the game 41-10 at the half.

The Lady Panthers (25-10) will find out their playoff opponent, either Pearsall or Carizzo Springs, after they play a tiebreak game on Friday night.

The Lifegate Falcons (8-8) won in overtime on Tuesday night over Bastrop Tribe, 45-44. Zach McCulloch had 16 for the Falcons, who head to the TCAL 2A state tournament on Thursday, Feb. 20.

The Lady Falcons handled Salem Sayers, 52-15, as Kayla Hallmark had 24. The girls will also compete at the TCAL state tournament next week.