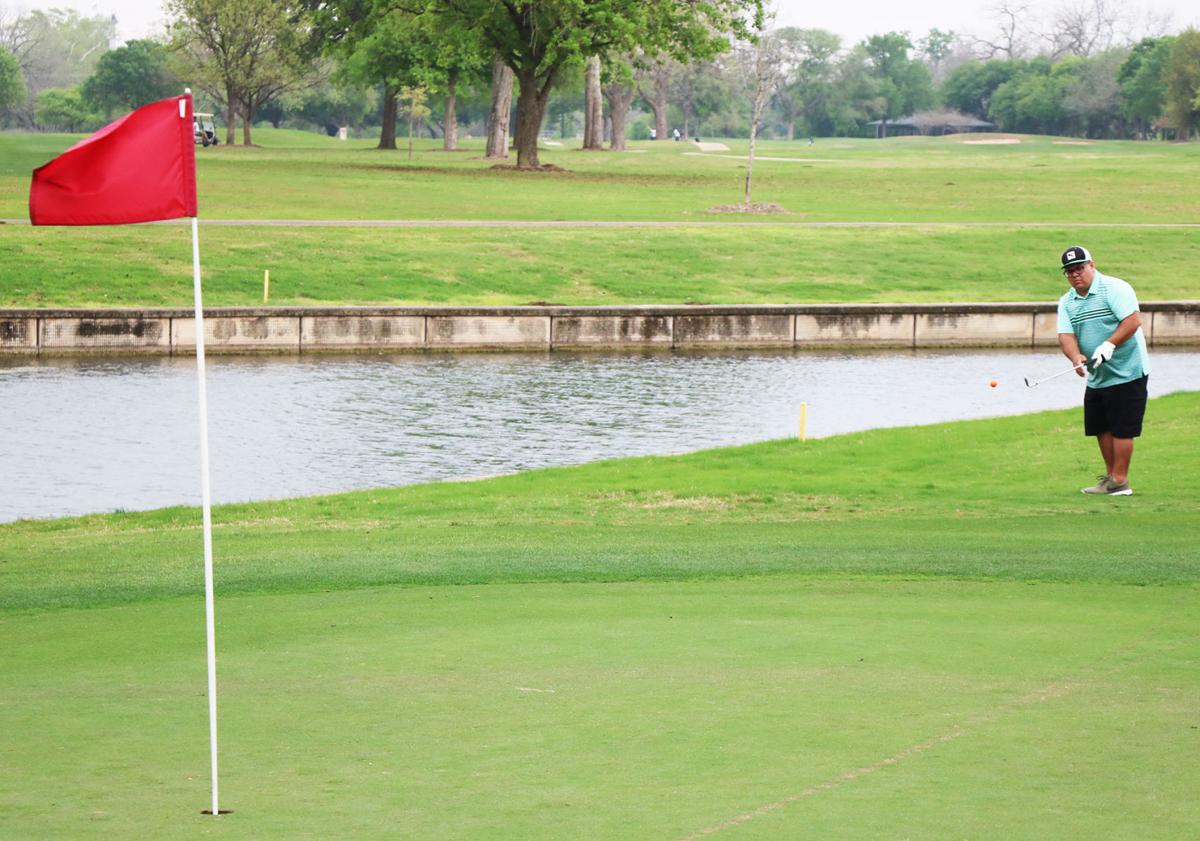 Joel Mata chips up to the green at Landa Park Golf Course during a round on Thursday, March 19, 2020. Mata and his partners played with COVID-19 recommendations in place as the course was packed last week. 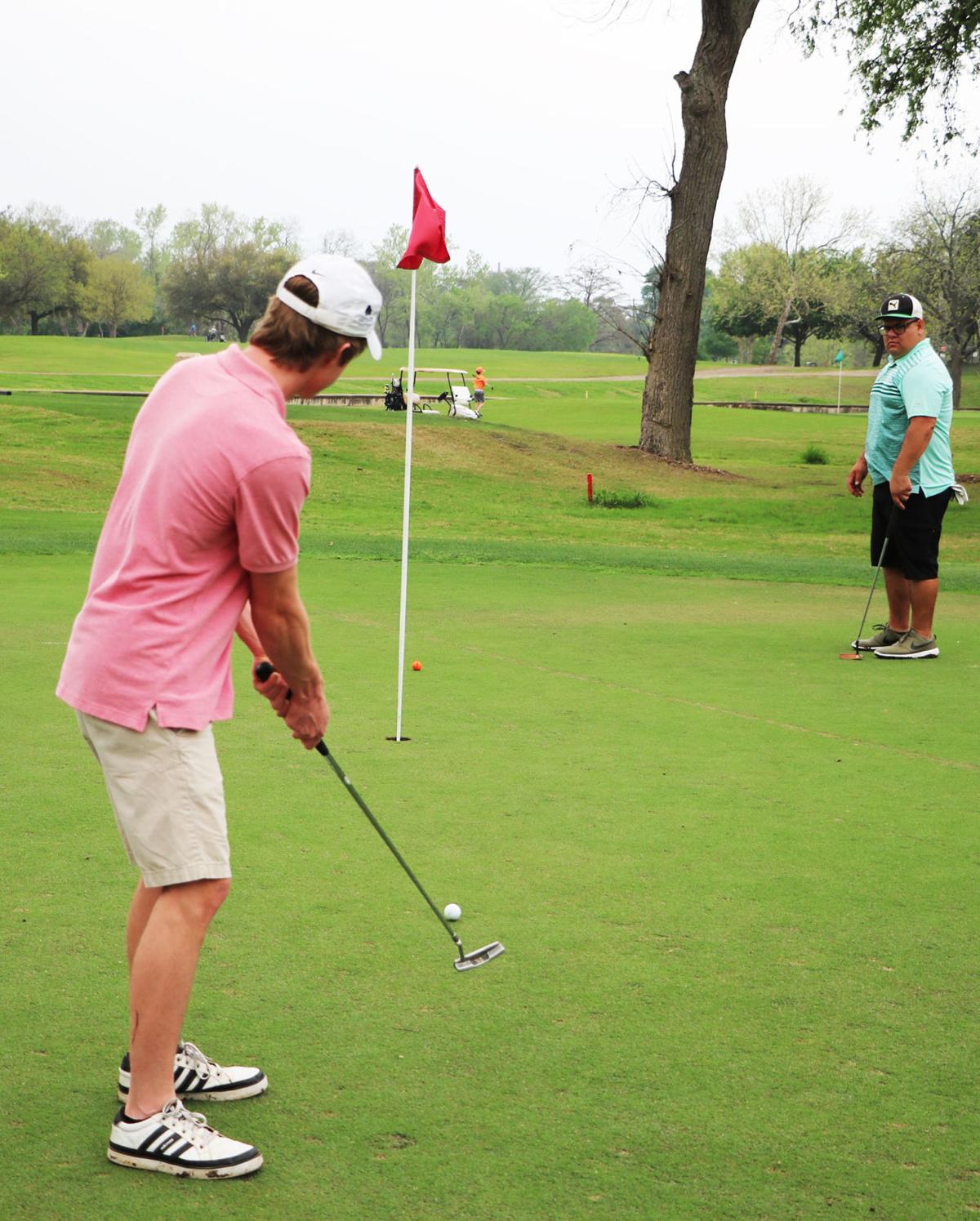 UTSA student Nick Bowers attempts a putt on the fourth green during a round at Landa Park oin Thursday, March 19, 2020.

Joel Mata chips up to the green at Landa Park Golf Course during a round on Thursday, March 19, 2020. Mata and his partners played with COVID-19 recommendations in place as the course was packed last week.

UTSA student Nick Bowers attempts a putt on the fourth green during a round at Landa Park oin Thursday, March 19, 2020.

The coronavirus hasn’t claimed all sports — not yet.

The golf course was packed at Landa Park last week, golfers everywhere trying to get in some sunshine and exercise in one of the last outlets remaining for sports enthusiasts to play.

Among those playing at Landa Park last Thursday were students Nick Bowers and Sam Lewis, and an emergency room employee, Joel Matta.

They came to the golf course that day trying to observe new protocols for playing with the virus outbreak.

There were no traditional handshakes before and after the round, flagsticks were left in the hole and they didn’t pick up clubs of their playing partners.

Bowers, a student at the University of Texas-San Antonio, was getting some extra golf in with the extended Spring Break announced by the university.

Lewis, who is from New Braunfels, attends and plays soccer and baseball as a high school senior at a boarding school in New York.

Matta works in the medical field for freestanding emergency rooms in the San Antonio area.

They were all thankful to still be able to come out and play — in some areas of the country, including right up the road in Austin, courses have actually been shut down.

Bowers said that classes at UTSA have been canceled for the rest of the semester, and that he would be starting online classes this week.

“We’re no longer going into classes, but the campus is open if we actually need to talk to an administrator or professor,” he said. “I wanted to take this extra time and enjoy the sunshine and good weather.”

He had played three rounds on his Spring Break as of last Thursday, with plans to play again. The 20-year-old thought that being on the golf course was a good way to get his exercise and noted that although he wasn’t that concerned about the coronavirus, golf allowed an opportunity to get out and still observe social distancing mandates.

“I’m not really trying to fall into the whole panic of the coronavirus,” Bowers said. “I’m trying to distance myself and golf is a distance sport.

“You don’t play with too many people, four at the max, so I feel golf is a good sport to play. You don’t have to think about everything, just about hitting the ball. So far I’ve gotten three rounds in, which is awesome.”

He wasn’t really thinking about the new guidelines for playing the game until Matta mentioned some of those on the first hole.

“I wasn’t really conscious of it until Joel made a joke about it on the first tee,” Bowers said. “I didn’t really have anything in mind about it, because I’m not really that worried about it.”

Bowers is a member of a club wake boarding team at UTSA, but that has been suspended along with the other sports at the university.

“They’re trying to distance us and not have us gather together,” he said. “So I’m trying to find something I can get out and do with a couple of buddies.”

Lewis, 18, hooked up with his buddy, Bowers, to play at Landa, just the second time he’s been on the golf course. He was also on an extended Spring Break from school, on his third week off.

“Before I left it was not a big deal, there were jokes being told (at school),” Lewis said. “When I flew through JFK, the New York City airport, I had hand sanitizer and I wiped down all the seats and everything.

“I was very cautious when traveling, and you could tell (travel was affected) because the airport was completely empty.”

Lewis was taking the time off from school to try and learn golf, hitting balls a few times and getting out to the course with Bowers.

“I play baseball and our baseball season got canceled,” he said. “So I’ve had so much free time that I’ve really been trying to pick up a new sport. Golf is a good sport and New Braunfels doesn’t really have any cases, or I’ve heard there might be one.

“But I’m really not that concerned about it, because I live out in the country and I don’t come in contact with people.”

Golf gave him a chance to get out and still keep a distance away from fellow players.

“When you come to play it’s out in the open and there’s only four people,” Lewis said. “That’s what the government is saying — groups of less than 10.”

He hasn’t been gathering with friends in New Braunfels because, “my mom doesn’t let me go out,” he said.

“She’s keeping me under wraps, not letting me go out at night, but she’s letting me come out to play golf or I can go to a friend’s house.”

Matta said that he has seen some people come in to get tested at the two emergency rooms where he works, but that they send the people that meet the criteria to get the tests elsewhere.

“We’ve had five or six that were tested, but I don’t know if they were confirmed,” he said.

The company is taking extra measures to protect Matta and fellow employees when people come in with symptoms, including full protective suits, gloves, masks and more.

He felt it was safe to come out and play because of the natural distance from others on the course.

“I think I have more interaction with my coworkers than I do with golf partners,” Matta said. “Let’s say you were to walk, you practically never even talk to each other. Even on the green you’re a few feet away from each other.”

He skipped removing the flagstick and the handshake after the round.

“You don’t gather after the round and you don’t share your clubs.” Matta said. “The post-round handshake, you just say good game and wave.”

To a man, they were all appreciative that — at least for the moment — they could still get out on the course.

“If I wasn’t here I would probably be inside playing X-Box or something,” Bowers said. “This is way better, it’s nice to get outside.”