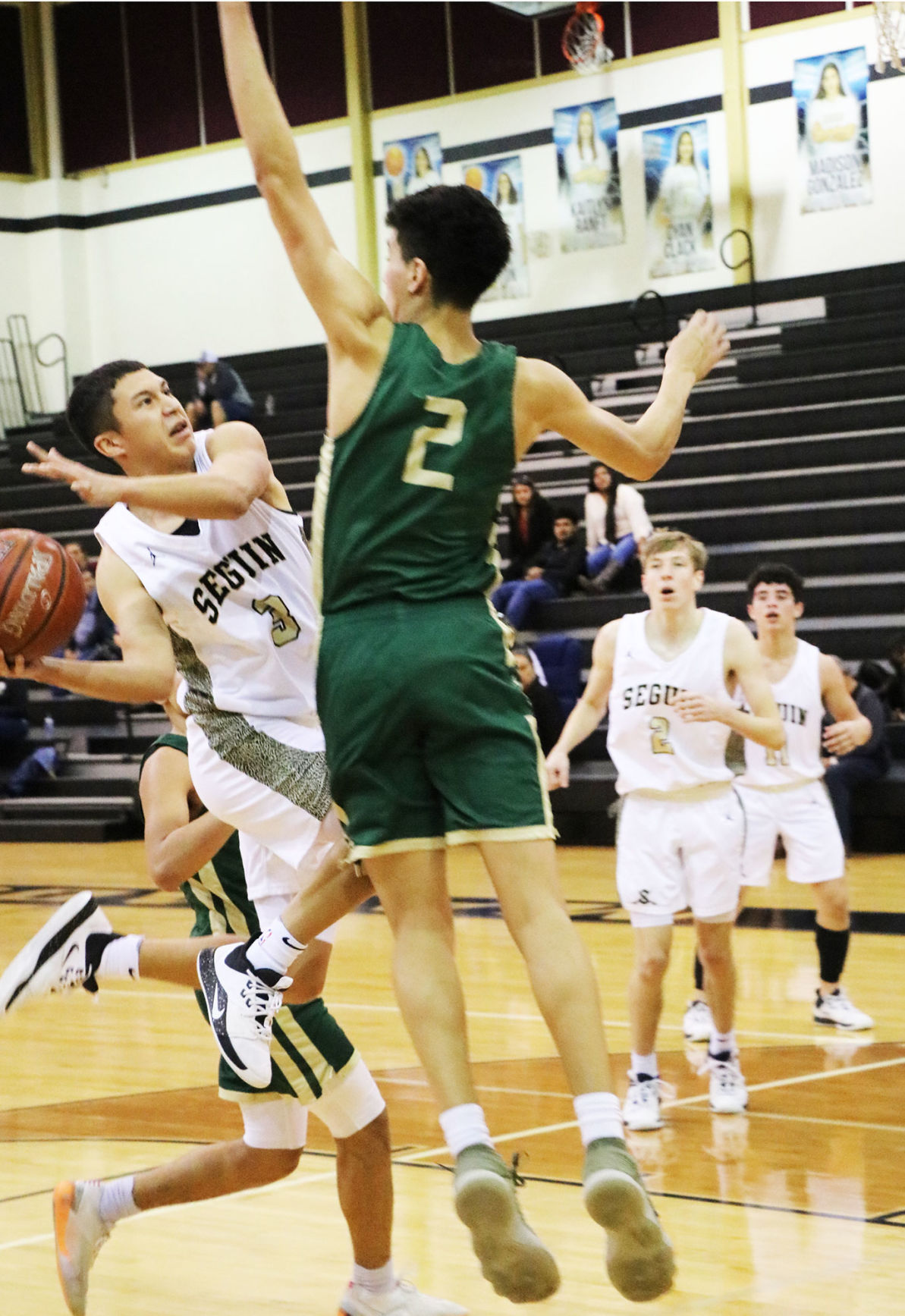 Seguin's R,J. Acuna goes in for a shot with a McCollum defender trying to block it in the Mats' wins over the Cowboys on Firday, Jan. 3, 2020. Acuna made the shot. 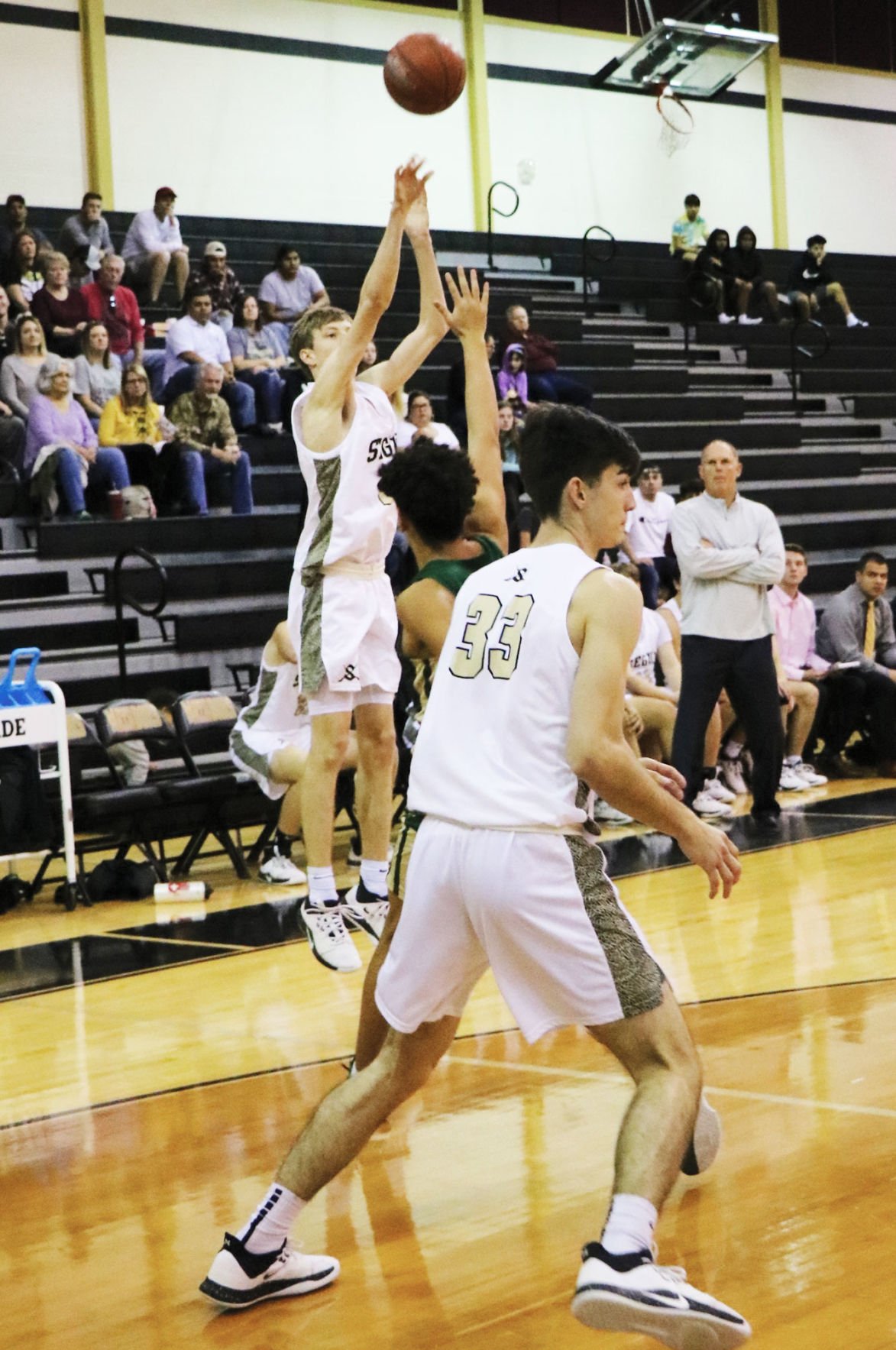 The Mats' Gerrit Twitero launches a three in SEguin's district win over McCollum on Friday at Goldie Harris Gym. 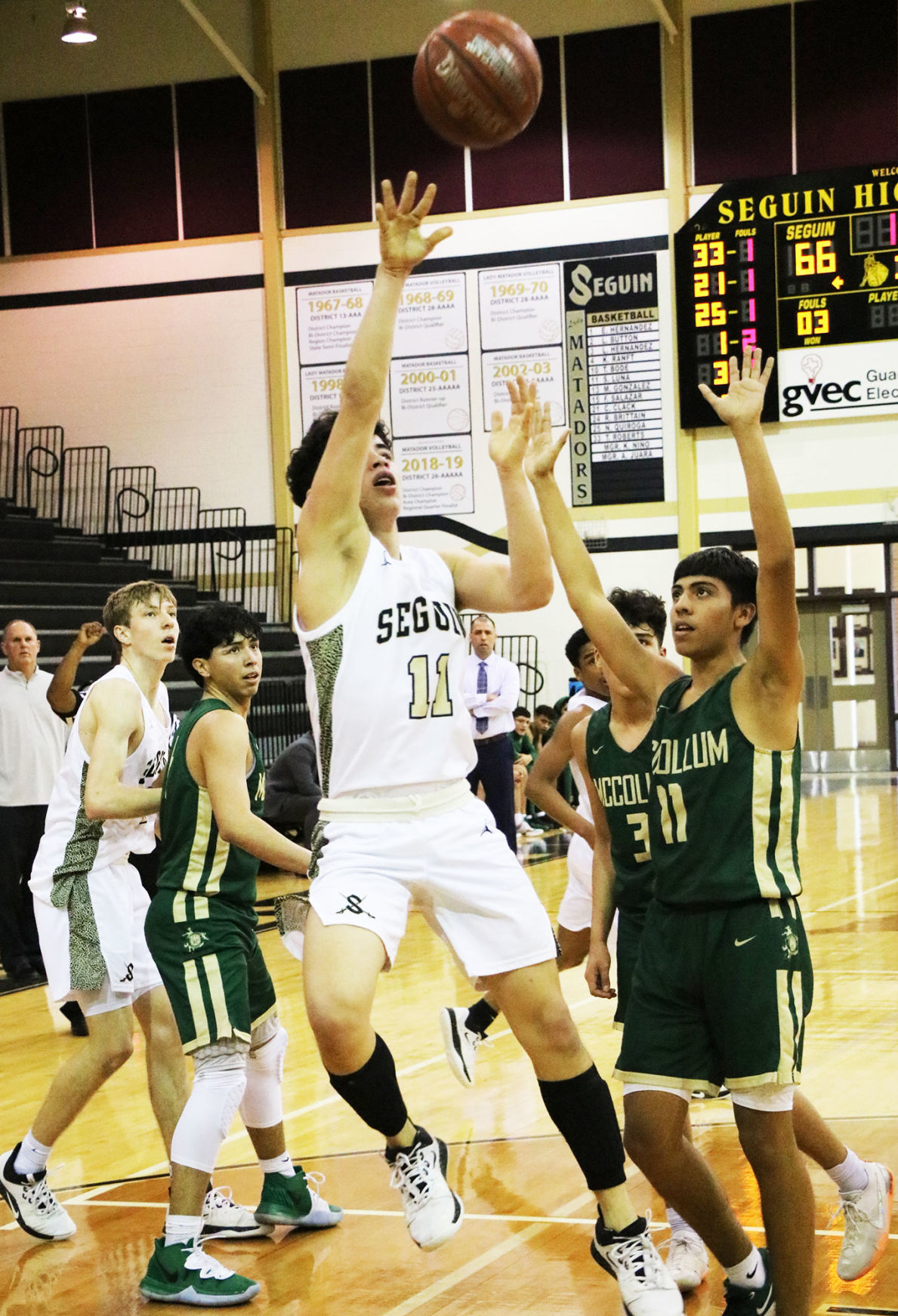 The Mats' Joseph Vela goes up for two in Seguin's district win over SA McCollum on Friday at Goldie Harris Gym.

Seguin's R,J. Acuna goes in for a shot with a McCollum defender trying to block it in the Mats' wins over the Cowboys on Firday, Jan. 3, 2020. Acuna made the shot.

The Mats' Gerrit Twitero launches a three in SEguin's district win over McCollum on Friday at Goldie Harris Gym.

The Mats' Joseph Vela goes up for two in Seguin's district win over SA McCollum on Friday at Goldie Harris Gym.

Following a brutally tough District 26-5A opening schedule that saw them play three of the teams expected to contend for the district title, the Seguin Matadors were in desperate need of a win.

The top four teams from the district will make the playoffs in 2020, so the Mats were up against the eight ball Friday afternoon at Goldie Harris Gym.

A win to get back in the hunt, or a loss that would make it extremely difficult.

The Mats (1-3, 10-11 overall) responded with one of the best games of the season, scoring 49 points in an offensive explosion in the first half, and coasting from there to beat the McCollum Cowboys, 82-59.

Defense and creating turnovers led to a 13-0 run in the last three minutes of the first quarter that got the Mats a big lead early, 21-6. The Mats made three straight three-pointers in the run, from guards Chris James and Joseph Vela, and from forward Gerrit Twitero.

“Defense started it, gave us the energy we needed and led us to the ‘W’,” James said. “We played defense the whole game — it was a good win for us and was very much needed.”

“The defense really led us to where we were today,” Twitero said. “That was our priority during practice, and we were executing well, passing the ball around and hitting shots.”

Head coach Dwayne Gerlich knew the Mats needed to get that first district win under their belts.

“We started out 0-3, but we also played the top three teams in the district,” he said. “We played the top ones, played well at certain times but never finished the whole game.

“The good thing about today was we came out of that Boerne tournament, had a good tournament, focused in today and came out and played a full 32 minutes.”

Seguin had five different players make three’s in the game, and got four more in the second quarter, when the lead ballooned to 26 points as Vela made a three to close out the half — and the Mats went into the intermission up 49-23.

The three’s came off of kick outs from the guards, James, Vela and R.J. Acuna, who consistently penetrated into the lane, leaving open shooters on the wing.

“That’s all our point guards,” Twitero said. “They were getting us open — they’re the best point guards in the district.”

“That’s part of our offense, to penetrate and kick,” Gerlich said. “We’ve been working hard in practice of getting our guys to the right spot.

“They got to their spot, we were making the correct pass today and making the right decisions. We made a lot of good decisions in the first half and the guys came out and produced.”

James consistently broke down players off the dribble and appeared unstoppable at times — the Cowboys were unable to keep him out of the lane when he decided he was going to drive.

Twitero and James were aware of the importance of the game, after  the Mats had started the district campaign with the three straight losses. The win gives the Mats a chance to go on a run and challenge for a playoff spot of the district, something Twitero and James have already been thinking about.

“We’ve just got to steal a couple of away games, win the rest of our home games and we’ll be fine,” Twitero said.

Gerlich felt the win gives the Mats a shot at going on a streak to make a playoff run.

“We’ll just take it one game at a time,” he said. “I feel like we have a chance, we’re in control our own destiny and doing whatever we need to do.”

Twitero led the scoring for the Mats with 23 points, while James chipped in with 18 and Vela had 16 in the win.

Seguin travels to SA Memorial for the next district battle on Tuesday. Tip-off is 6:30 p.m.

The Seguin girls fell at McCollum to stay winless in district play (0-6) in another close loss, 49-43. Tresalyn Roberts led the Lady Mats with 13 points, while Taylor Bode and Liv Hernandez had seven each.

The Navarro girls (16-9 overall) rolled over Brooks Academy to go 3-0 in district play, 59-6. Tatum Harborth had 12, Laylin Sturm and Ali Harless had nine and Sara Benner and Ryanne Hepp had seven each in the dominating win.

Marion’s Lizzie Abrameit scored the 1,000th point of her career, but the Bulldogs fell at La Vernia, 52-28, to go to 8-14 on the season. Abarmeit had 10, while Lily Bek had seven and Molly Rooke, four, in the loss.