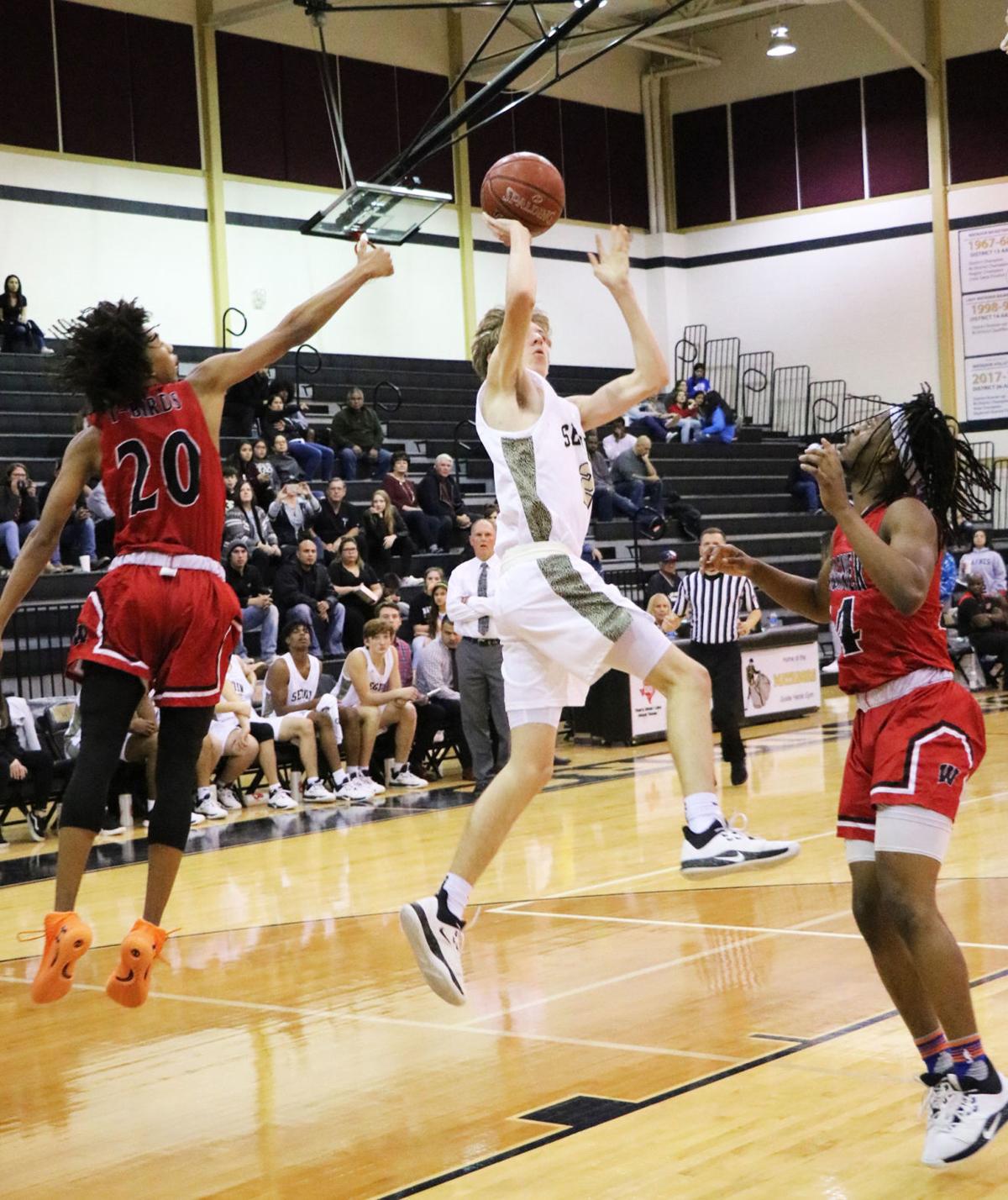 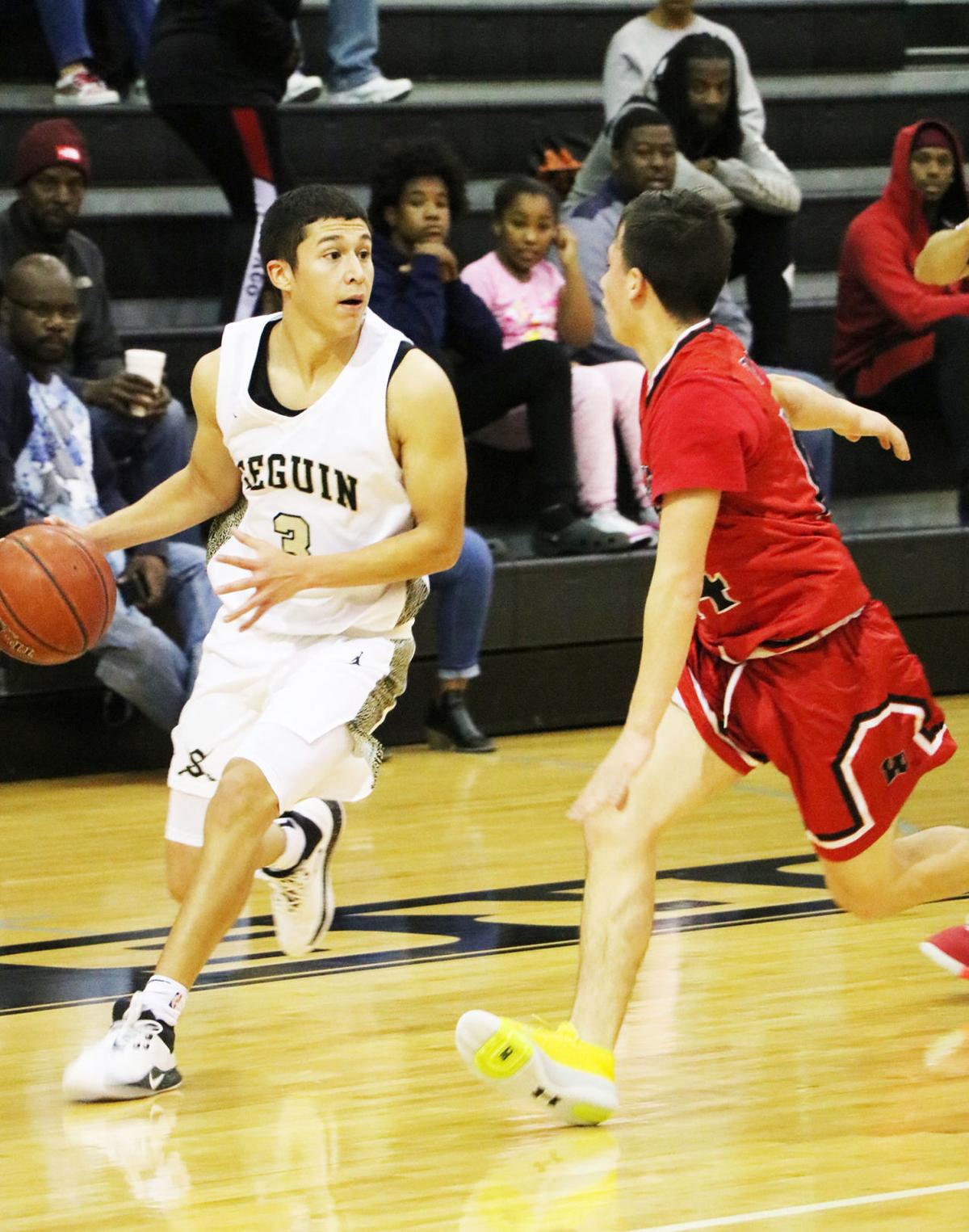 The Mats' R.J. Acuna lbrings the ball up the floor in Seguin's loss to Wagner at Goldie Harris Gym on Tuesday night.

The Mats' R.J. Acuna lbrings the ball up the floor in Seguin's loss to Wagner at Goldie Harris Gym on Tuesday night.

Seguin head coach Dwayne Gerlich makes a point to apply full court pressure to teams, looking to increase the speed of games and keep the action moving up and down the basketball court.

But Gerlich went away from his usual strategy Tuesday night against SA Wagner in the District 26-5A-I opener for the Mats and the T-Birds.

It was for a simple reason — the T-Birds had too much speed for the press to be effective.

Instead of Seguin pressing throughout the game, Wagner used its press on the Mats, resulting in 27 turnovers and a 71-53 loss to the T-Birds.

“It’s their overall athleticism at all five positions,” Gerlich said. “It’s hard to go double them, they are very quick, they see the floor well, and if they hit somebody open they’re going to attack the rim.

“We told the guys to give them a little bit of room and stay in front of them the best we could.”

After a Tyson Coleman three-pointer pulled the Mats to within one at 16-15 with six minutes left in the second quarter, Wagner came with the full court pressure — and the turnovers started piling up for Seguin.

The turnovers resulted in easy buckets for the T-Birds, and Wagner went on a 13-0 run over the next five minutes to build the lead to 29-15.

Seguin wouldn’t hit another shot until a Chris James three with 1:43 left in the half.

Gerlich said the Mats’ goal for the game was 14 turnovers, which was nearly doubled by the T-Birds pressure.

“It was a steady dose and diet of their defense,” Gerlich said. “We had 27 turnovers and that’s a lot of opportunities where we didn’t have a chance to score.”

“We’ve got to limit our mistakes, have fewer turnovers and allow less offensive rebounds,” Gerlich said. “If we cut out half of those (offensive rebounds) and half the turnovers, we’re right there and it’s a nip-and-tuck game.”

Seguin made a couple of runs in the second half, after the T-Birds went up by as many as 18, but could get no closer than 12 points down the rest of the night.

James led the Mats in scoring once again with 19 points, while Gerrit Twitero added 14 and Joseph Vela had eight in the loss.

“C.J. (James) has become a leader on the floor with his ability,” Gerlich said. “He’s our best defender, our best ball handler and has become one of our best shooters. He’s done a great job across the board.”

Seguin travels to New Braunfels for the River City Classic on Thursday, taking on Leander Rouse at 12 p.m.

The Navarro girls (11-6) lost to Karnes City in a one possession game, 50-47. Laylin Sturm had 21 while fellow freshman Ryanne Hepp, Ali Harless and Berklee Andrews had six points each. The Panthers (2-3) beat Smithville at home on Tuesday night, 49-39.