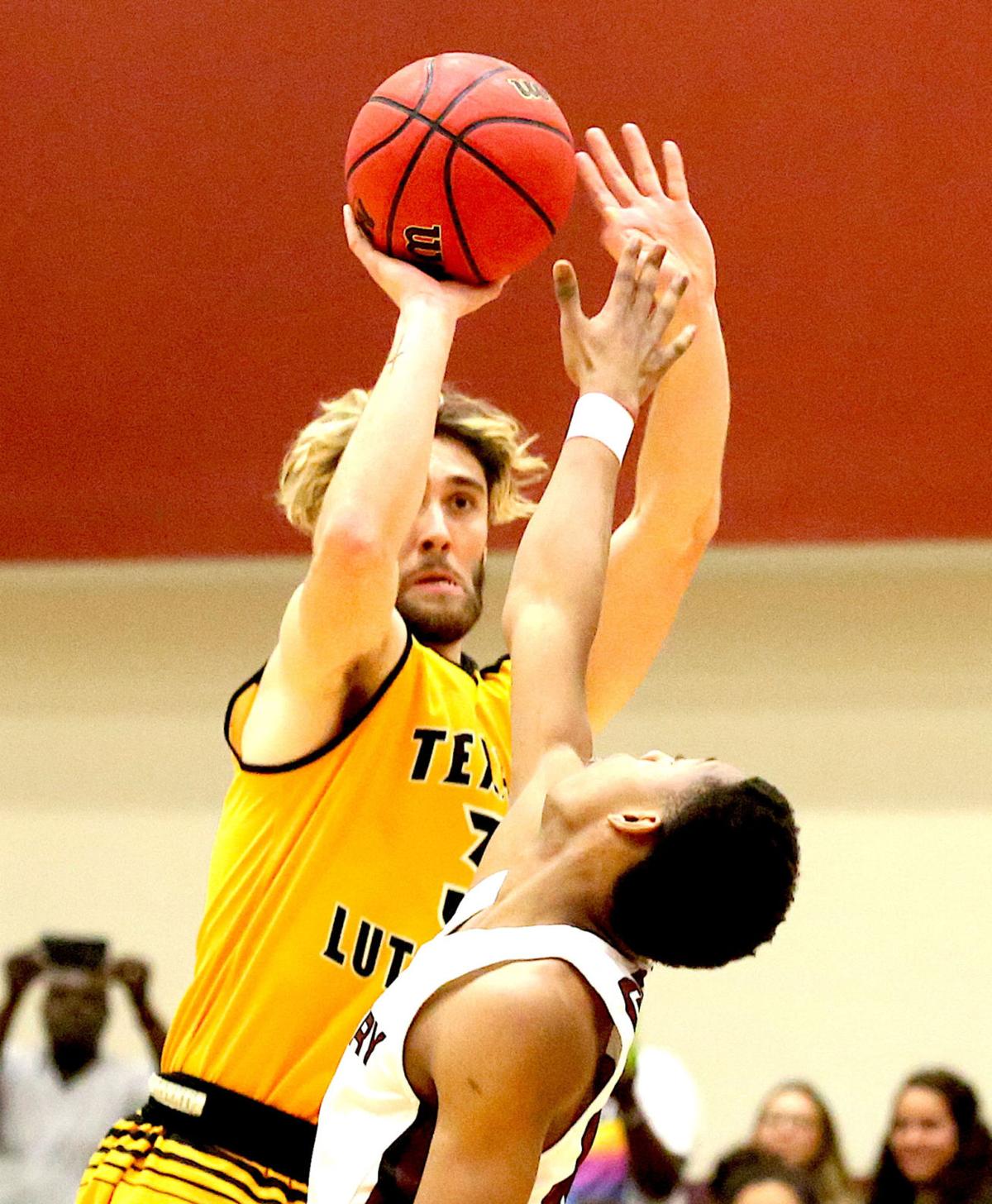 The Bulldogs' Sebastian Andrade (3) puts up a contested jumper in the Bulldgos' loss to Centenary on Sunday, March 1, 2020 in Kerrville. Andrade made the All-tournament team. 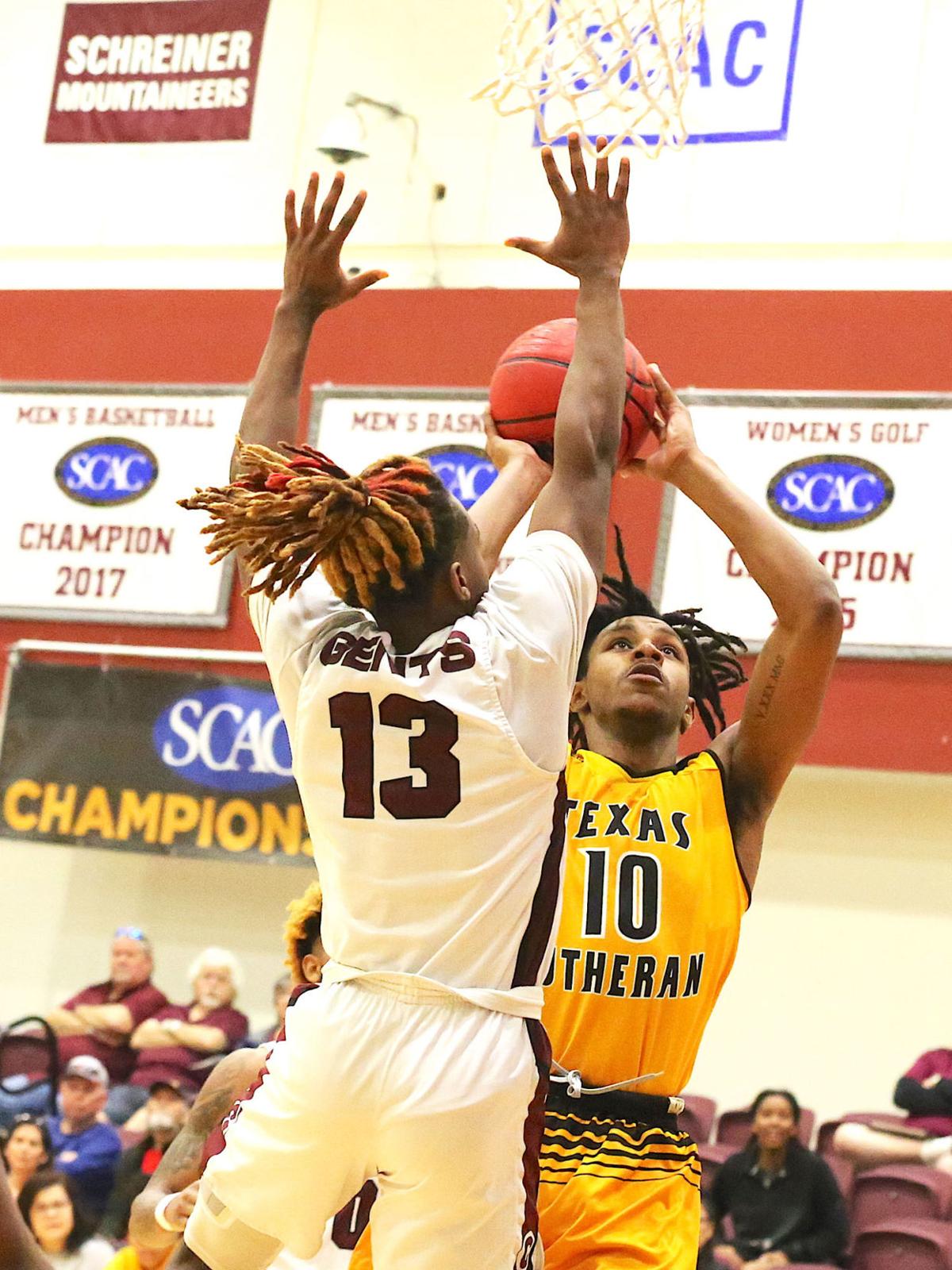 TLU's Jamir Mason goes up at the rim during the SCAC championship game in Kerrville on Sunday, March 1, 2020. Mason had 11 points as the Bulldogs came up one game short of advancing to the NCAA Division III Men's Championship.

The Bulldogs' Sebastian Andrade (3) puts up a contested jumper in the Bulldgos' loss to Centenary on Sunday, March 1, 2020 in Kerrville. Andrade made the All-tournament team.

TLU's Jamir Mason goes up at the rim during the SCAC championship game in Kerrville on Sunday, March 1, 2020. Mason had 11 points as the Bulldogs came up one game short of advancing to the NCAA Division III Men's Championship.

KERRVILLE — They really weren’t expected to be there.

The Texas Lutheran Bulldogs men’s basketball team was picked seventh in the Southern Collegiate Athletic Conference preseason poll, but far exceeded that prognostication with an 11-7 record and a tie for second in the conference during regular season play.

Then at the SCAC tournament over the weekend at Schreiner University in Kerrville, the Bulldogs (16-12) won two games, including an upset of second seed Austin College, 79-72, to reach the conference final on Sunday against No. 1 seed Centenary.

TLU and Centenary split the regular season matchup, with both teams winning on the road, so the game on Sunday was the rubber match for the right to go to the NCAA Division III Men’s Basketball Championship.

While the Bulldogs lost to the Gents (18-9), 77-56, the season was deemed a success for TLU by head coach Mike Wacker.

TLU made it to the tournament and the final with just one senior on the team.

“It’s outstanding, I’m really looking forward to our future,” Wacker said after the game on Sunday. “These guys were picked seventh and they definitely showed the world they are a lot better than that.”

On Sunday though, the lid was on the basket for most of the first half against the Gents.

Senior Jorden Kite hit the first three of the game to give TLU an early 3-2 lead — but that would be the only made three in the first 20 minutes for the Bulldogs, as they went 0-11 from outside the arc for the rest of the first half.

“We just didn’t shoot the ball well in the first half, had too many turnovers and that allowed them to get the lead,” Wacker said. “They played with more confidence when they had the lead. There’s a reason they were the No. 1 seed and they played like it.

“We uncharacteristically did not make shots in the first half, 1-12 on threes is not what we usually do, and even in the second half we were not really hitting.”

Despite that TLU kept the game within reach, as Caleb Lister had six early points and made a bucket with 3:25 left to pull the Bulldogs back within seven, 29-22.

Sebastian Andrade made a three-point play and got another bucket on back-to-back possessions early in the second half to keep TLU within 11, 43-32, but that was as close as they would get the rest of the game.

The Bulldogs beat Austin College in the semifinals after losing twice to the Roos in the regular season.

“It was a tremendous opportunity to show that we had gotten better,” Wacker said. “We had been improving, then in midseason we hit a little lull, but then we really came back and played well together the last four games and in the tournament.

“The game against Southwestern was awesome, we really shot the ball well, as we did against Austin College. I felt confident about our chances today — but hats off to Centenary.”

TLU was held to 31% shooting for the contest, (21-66), and put up 31 threes in the contest, making just six of those, most coming after the game was out of reach.

For the game, Lister led TLU with 19 points, while Jamir Mason, Andrade and Kite contributed with 11 points each.

Andrade and Lister had big games to get TLU to the final and were both named to the All-tournament team.

“They’re both just terrific,” Wacker said. “‘Bash’ (Andrade) has been a three-year starter and Caleb has put in the time developing his game and now he’s showing what he can do — 19 points and 14 rebounds in the championship game against the best athletes in the league.”

Kite, a transfer from Incarnate Word, was the only senior on the squad and scored 349 points and made 74 three-pointers this season for the Bulldogs.