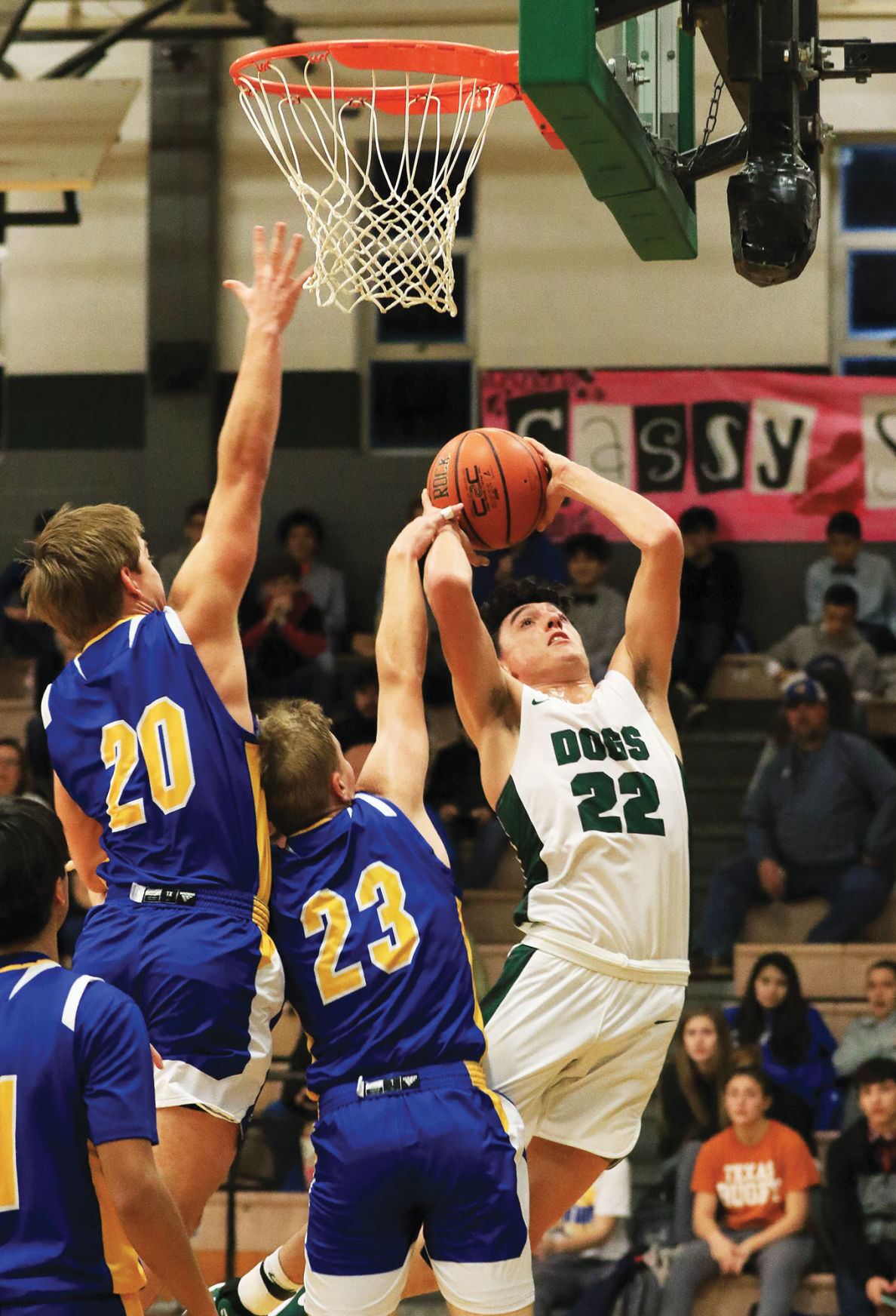 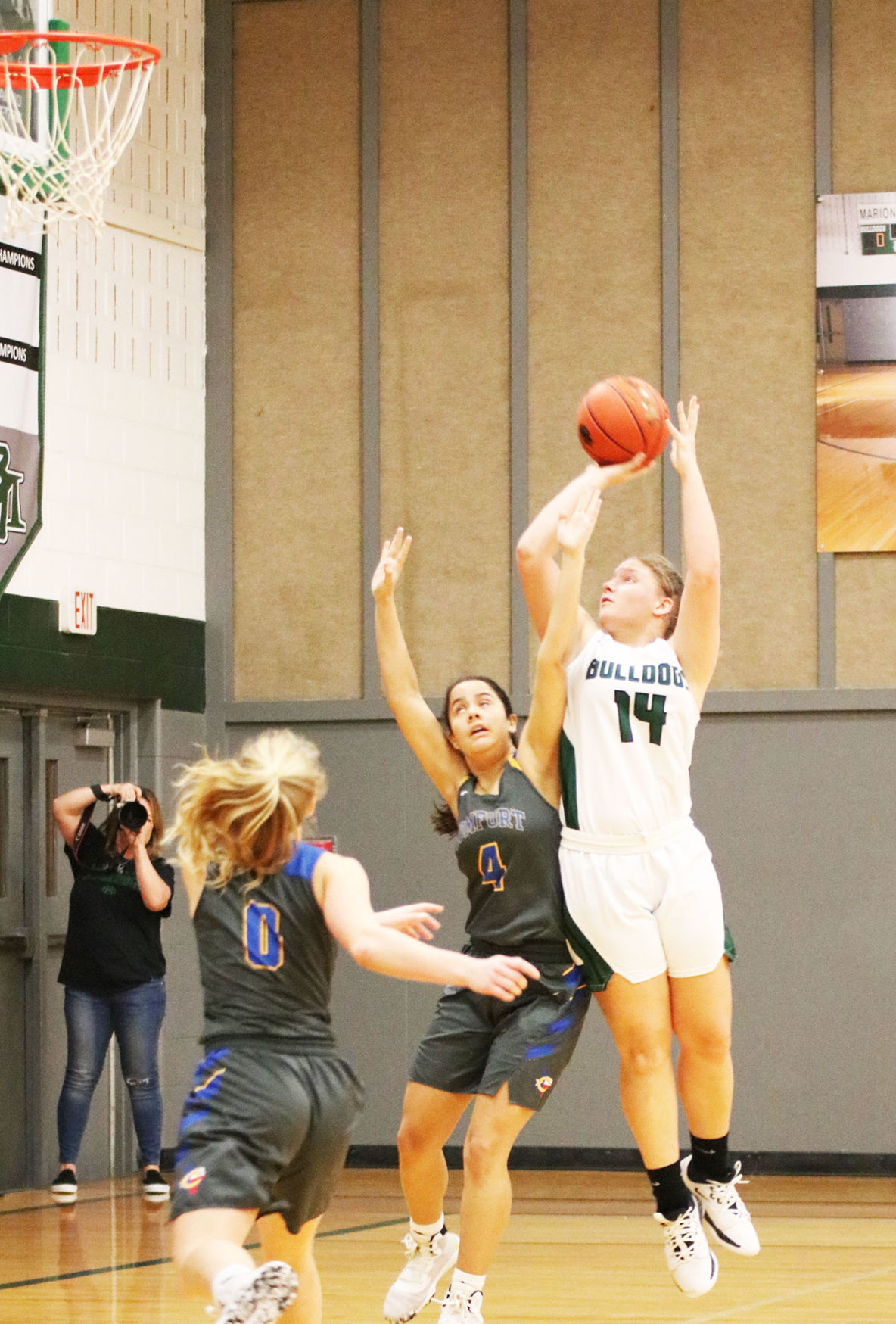 The Bulldogs' Sarah Cook goes (14) up for two in Marion's 59-50 loss to the Comfort Deer on Friday night in Marion.

The Bulldogs' Sarah Cook goes (14) up for two in Marion's 59-50 loss to the Comfort Deer on Friday night in Marion.

The Marion boys and girls squared off against two very good teams Friday night in Marion in the first District 26-3A games of the season — in the form of the Comfort Deer (girls) and the Comfort Bobcats (boys).

The Deer came into the game 15-9 and the Bobcats were 19-5, and both species had the team to back up those records.

The Deer would end up beating the girls from Marion, 59-50, while the Bobcats would handle the Bulldogs for the 71-59 win.

Both games were highly entertaining affairs for a great night of basketball in Marion.

Lizzie Abrameit was on fire in the first half against the Deer, as the Bulldogs outplayed Comfort for the first three quarters of the contest.

Abrameit made five threes in the first half to give Marion an 11-point lead, and added a sixth at the end of the third quarter, as Marion built a 45-34 lead.

“We played really well for three-and-a-half quarters, it was probably one of our better games of the whole season,” head coach Kollyn McWhinney said. “We were as aggressive as we’ve ever been. We were attacking, moving the ball and did a good job of shutting down their point guard.”

But the Deer mounted a furious comeback in the fourth quarter, outscoring the Bulldogs 14-2 over the first four minutes of the period to take a 48-47 lead.

Marion did not make a bucket during the stretch, managing just two free throws as Comfort stormed back to take the lead.

“Once they made that run, we kind of had to get out of our defense we were running, and their point guard was able to pick us apart after that,” McWhinney said.

The Bulldogs were in the bonus by that time, but were unable to make free throws when they got to the line, as they went 3-10 at the charity stripe in the period.

“We were 7-23 at the free throw line, and we were 7-23 on three-pointers,” McWhinney said. “You can’t make the same percentage at the line as you do from three-point range. It all comes down to making free throws — and we did not.”

The Deer would outscore Marion 11-3 the rest of the way to secure the win, as the Bulldogs didn’t get a basket until Abrameit made a layup with just :30 seconds left in the game.

Coach McWhinney thought the Deer’s senior-laden team was the difference.

“They had the experience, returning all five starters, all seniors,” she said. “I think when it came down to it, they were just mentally tougher than we were.

The Bulldogs have played better of late, losing by just three to Lago Vista (57-54) and then playing Comfort close Friday night, but it’s the time when they need to put together some wins, the coach said.

“We work really hard, we don’t work for moral victories,” McWhinney said. “At this point of the season we're working for wins. It’s disappointing to see us work so hard and not being able to finish the game.”

Abarameit led the Bulldogs with her 25, while Molly Rooke had 11, and Lily Bek and Sarah Cook chipped in with 7 point each. The Bulldogs are 0-2 in district and 8-18 overall.

The Bulldogs ran into a high pressure defense in the Bobcats, which pressed Marion the entire game and forced 14 turnovers on the night — in a game that turned into a track meet at times.

“It was exactly what we expected coming into the game,” head coach Jon Allen said. “Our game plan was to slow the game down, and we didn’t do a very good job of that tonight.

“We tried to run with them early and had some success here and there, but that’s not our style of game. I thought they did a good job of making us play their style.”

Still, Marion got solid play from Ryken Autry (five threes and 20 points) on the outside and Jayden Williams (12 points) on the inside to keep it within reach through three quarters.

Autry kept the Bulldogs in it with three straight threes, the last coming at the start of the fourth quarter. Four straight points from Marion after that got them within six, 58-52, with just under seven minutes left in the contest.

But the Bobcat press forced a couple of Marion turnovers, leading to points, the Bulldogs missed a couple of shots from close range — and they would not get closer the rest of the game.

“When it mattered we didn’t make the right plays,” Allen said. “We missed some layups we could have made and didn’t get a couple of rebounds — I told the guys all that stuff matters.”

Autry had five of the six made threes for the Bulldogs in the game.

“He’s got to have some help with the scoring, especially from the outside,” Allen said. “Our outside shooting besides him has been nonexistent for a while. Most of our losses are because of that. If that’s the shot we’re getting we’ve got to knock those shots down — we didn’t do that tonight.”

Williams played tough on the inside on his way to the 12 points, while Zach Goodwin scored on most of his points on fast breaks for 11 and Bradley Cook had 10 in the loss.

Top-ranked and district leader SA Wagner handed Seguin an 81-49 defeat at Wagner Friday night, dropping Seguin to 4-4 in District 26-5A and 13-12 overall.

The loss ended a five-game winning streak for the Matadors.

Chris James had 18 and Joseph Vela, 14, as the only Matadors in double figures. Gerrit Twitero was held to three points on the night. The Mats are currently tied for fifth place in district play with eight games left.

The Seguin girls fell to Wagner at Goldie Harris Gym, 60-30 for its second straight district loss.

The Lady Mats (2-8, 12-17 overall) got 10 points from Kaitlyn Ranft, Tresalyn Roberts had eight and Cyan Clack, five, in the defeat.

The Lifegate Falcons (3-6) fell to Coastal Christian, 59-34, with Zach McCulloch scoring 15 to be the only player in double figures.

The Lady Falcons fell to the Corpus Christi Badgers in a tight game, 43-39. Hannah Green had 12 while Kayla Hallmark, Madisyne Rice and Kimbree Wrinkle had seven points each.