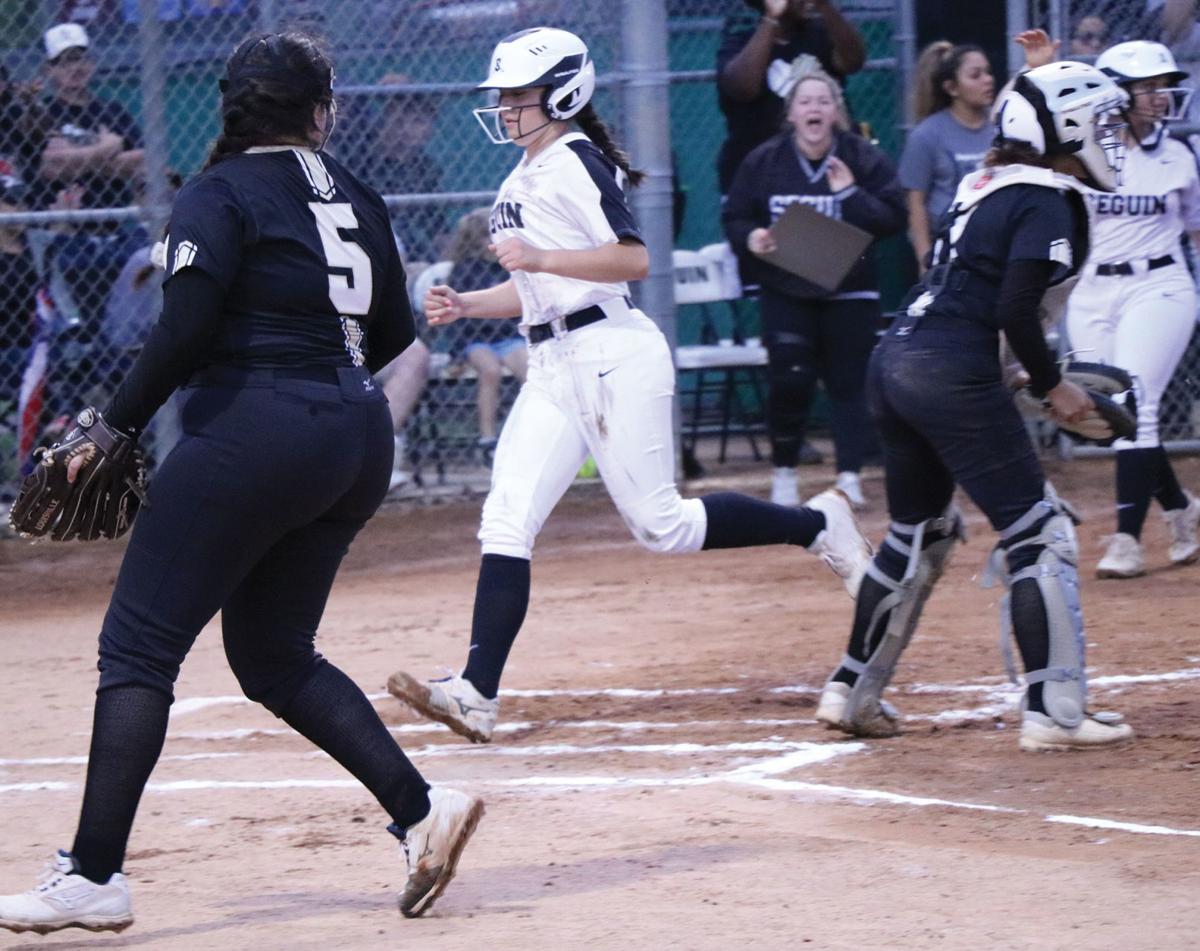 Seguin's Marissa Bradley scores in a game against the Edison Golden Bears last season. Bradley signed last week to continue her softball career at Our Lady of the Lake University in San Antonio. 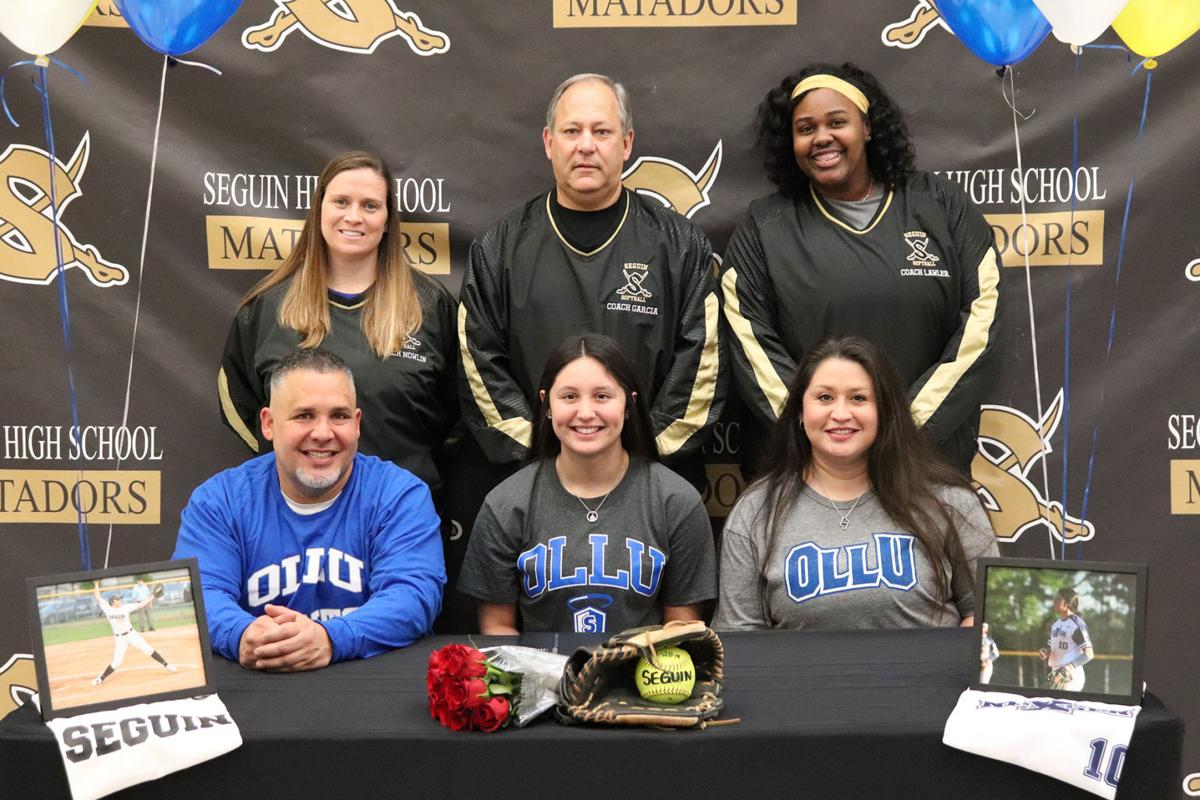 Seguin's Marissa Bradley signed her letter of intent to play for Our Lady of the Lake University surrounded by her parents and Seguin coaches at Goldie Harris Gym on Thursday, Jan. 16, 2019.

Seguin's Marissa Bradley scores in a game against the Edison Golden Bears last season. Bradley signed last week to continue her softball career at Our Lady of the Lake University in San Antonio.

Seguin's Marissa Bradley signed her letter of intent to play for Our Lady of the Lake University surrounded by her parents and Seguin coaches at Goldie Harris Gym on Thursday, Jan. 16, 2019.

Seguin senior Marissa Bradley still has a season to play as a Lady Matador.

But the first baseman and pitcher already knows where she’ll be playing in college.

Bradley signed her later of intent to play at Our Lady Of the Lake University in San Antonio last Thursday at Goldie Harris Gym.

Bradley made an impression at a club softball game on OLLU head coach Bruce Lenington, who was actually at the game looking at other players.

“We were just about done with our 2020 class and were looking for just one more player to round out the class,” Lexington said. “We were looking at two players on the team that Marissa was playing, but Marissa was the best kid on the field.”

In the middle of the game, a game in which Bradley had already hit two home runs, Lenington approached Marissa’s club coach to ask him about her.

“She hit two balls that hadn’t landed yet, so that’s number one,” Lenington said. “To make a long story short, I think she can hit, she can defend and I think she can help us right away at the next level.”

The game in December was a college showcase, so coaches were there looking at players for potential recruitment.

“There were college coaches there and the coach came up and talked to me after the game,” Bradley said.

Just a week after Bradley visited the campus and was sold.

“We offered her our very last spot in our 2020 class,” Lenington said. “From the time we met her to the time she committed it was seven days.”

Bradley had visited other campuses, primarily at junior colleges, before her visit to OLLU.

“I went to that one and it just felt right,” Bradley said. “It was a four-year school, so I wouldn’t have to transfer, and it was close to home — it checked all the boxes for me.”

“One of the things that makes Marissa successful at what she does is her focus,” Garcia said. “I haven’t seen that level of focus and dedication in a ballplayer in a long time.

“She leads by example — she’s’s not one of those that has to yell and scream at people, she gets out there and gets it done and everybody has to fall in line. She’s going to be greatly missed.”

Garcia has seen a lot of growth in Bradley’s game over the past four years.

“The game has slowed down for her,” Garcia said. “When you’re a great player and you work hard at it, and you learn the game, you don’t just play the game, it slows down for you and everything becomes easy.”

Bradley still has her senior season to play for the Lady Mats this spring.

“I’m hoping to make every game count,” she said. “I’m a senior so, yes, it’s sad that I’ll be leaving. But I just want to play to the best of my ability and just have fun with these girls, they’re my family.”

She’s been playing with some of the girls on the team since she was eight years old.

Bradley hopes to play her natural position at first base for the Saints, but of course is willing to play wherever they need her.

“I do play first base, so I would like to play that, but if I need to be a cheerleader or support the team in any other way, that’s what I’m going to do,” she said.

Bradley will receive an academic scholarship to play at the NAIA school, where she’ll be taking pre-pharmacy classes, and has already started toward that goal. She’s taking a class at Seguin to become a pharmacy technician.

If she passes the test, she plans on getting a job at a pharmacy while she’s in school at OLLU.