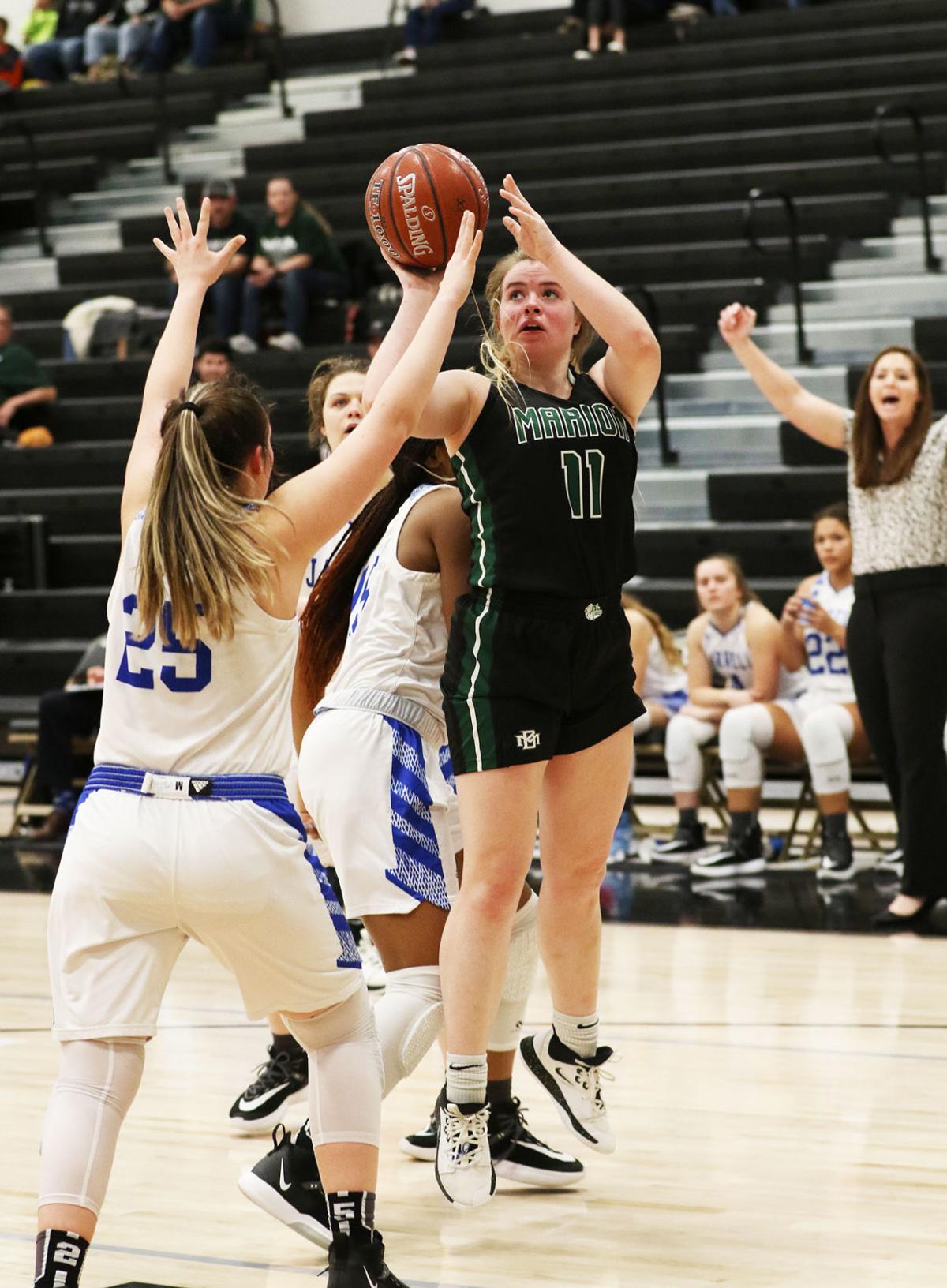 Marion's Lizzie Abrameit puts up a jump shot on her way to 20 points in the Bulldogs' bi-district loss to Jarrell on Tuesday, Feb. 18, 2020. 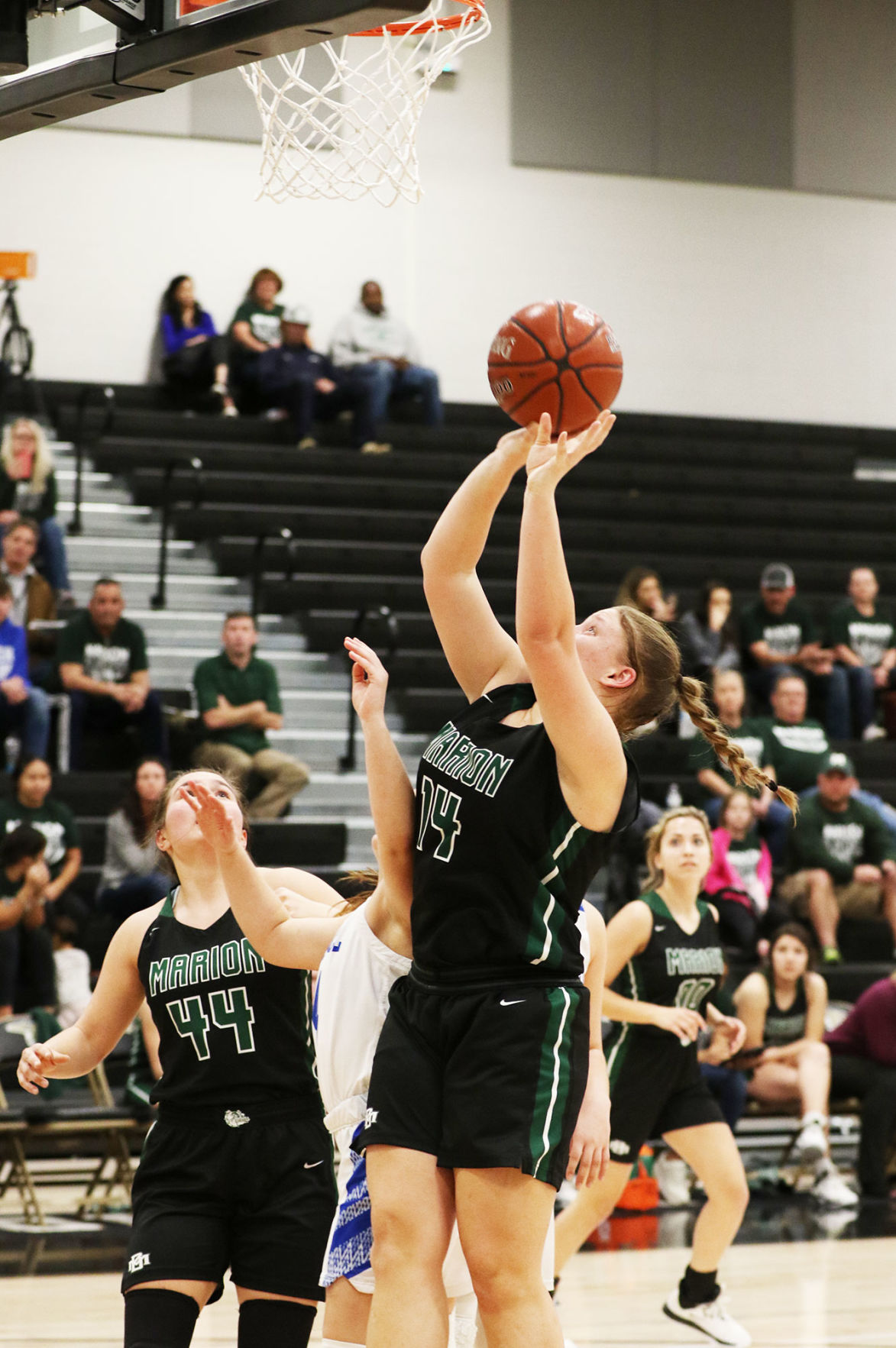 Bulldog freshman Sarah Cook gets two of her 12 points in Tuesday's loss to Jarrell.

Marion's Lizzie Abrameit puts up a jump shot on her way to 20 points in the Bulldogs' bi-district loss to Jarrell on Tuesday, Feb. 18, 2020.

Bulldog freshman Sarah Cook gets two of her 12 points in Tuesday's loss to Jarrell.

The first few minutes of the game were a killer.

Marion (12-22) succumbed to the pressure early in Tuesday night’s 3A bi-district matchup with No. 17 Jarrell (26-7), as the Lady Cougars came out in a full court, trapping press — and the Bulldogs simply could not break it.

Marion turned the ball over to the press a half dozen times to start the game, not getting a shot off for the first three minutes of the contest.

“I think the nerves got us,” head coach Kollyn McWhinney said. “We were making mistakes that we haven’t been making lately on the press break for the last couple of weeks.

“We were throwing passes three feet over our heads — I think had just a little too much energy.”

The trouble with the press put the Bulldogs in a 9-0 hole early, before Molly Rooke got the Bulldogs’ first basket of the game with just over four minutes left in the first quarter.

Jarrell would outscore Marion 21-7 in that first quarter, and go on to end the Bulldogs’ season with a 71-49 win.

Marion got back in the game in the second quarter, as the aggressive Lady Cougars fouled the Bulldogs with regularity in the first half, sending Marion to the free throw line 17 times as they kept the game within reach, trailing by just 11 after Lizzie Abrameit got her second three of the game to close the lead to 34-23.

“I was proud of once we dug ourselves a pretty big hole, we kind of settled down a little bit and we were able to play with them,” McWhinney said. “We got aggressive, which got us to the free throw line. They just kept working and working. That’s a good team, give them credit.”

The Bulldogs also had trouble keeping Jarrell off the glass, as the Lady Cougars got buckets throughout the game on second chance points after offensive rebounds.

“They killed us on rebounding,” McWhinney said. “That was one of our points of emphasis, but when you don’t block out you’re not going to get rebounds.

“But I’m proud of our girls — last year when we dug ourselves a hole we never got out of it, so it was nice to see this group respond the way we did.”

After an 8-1 run to start the second half, Jarrell had the game in hand with a 50-26 lead, and the Bulldogs would get no closer than 17 the rest of the game.

Abrameit, a senior, played her last game for the Bulldogs and led Marion with 20 points.

“They left a great example for them and because of that, this group is going to be able to carry this on once they graduate.”

Freshman Sarah Cook hit a couple of threes and finished with 12 on the night.

“Sarah had been playing very well recently, and I still think she hasn’t quite figured out how good she can be,” McWhinney said. “When she figures it out she’s going to be a double, double machine every game.”

Cook, along with juniors Lily Bek and Molly Rooke, saw significant playing time this season and will return to give the coach a core group to start with for next year.

The Seguin boys finished the season with a 61-47 win over Veterans Memorial in San Antonio.

Chris James led the Mats with 18, while Gerrit Twitero had 14, Jhalen Mickles had nine and Joseph Vela had eight in the win.

The Apaches also finished the season at 6-6. The winner will get the No. 3 seed out of the district, the loser will be the No. 4 seed.

The Marion boys held off SA Gervin on Tuesday in Marion, 55-53, and secured the fourth seed out of District 26-3A.

The Seguin Lady Mats won the first official game of the season on Tuesday night, with an 11-1 run-rule rout of District 26-5A foe Kerrville Tivy.

Marissa Bradley notched the win with four innings of work, allowing just one run on three hits. Bradley was also 4-4 at the plate and McKenzie Neumann was 3-3 with two doubles and three RBI’s.

The Lady Mats soccer team fell to Tivy in a hard-fought game, 3-2. Nayeli Segura and Reagan Rodriguez had the goals for Seguin.