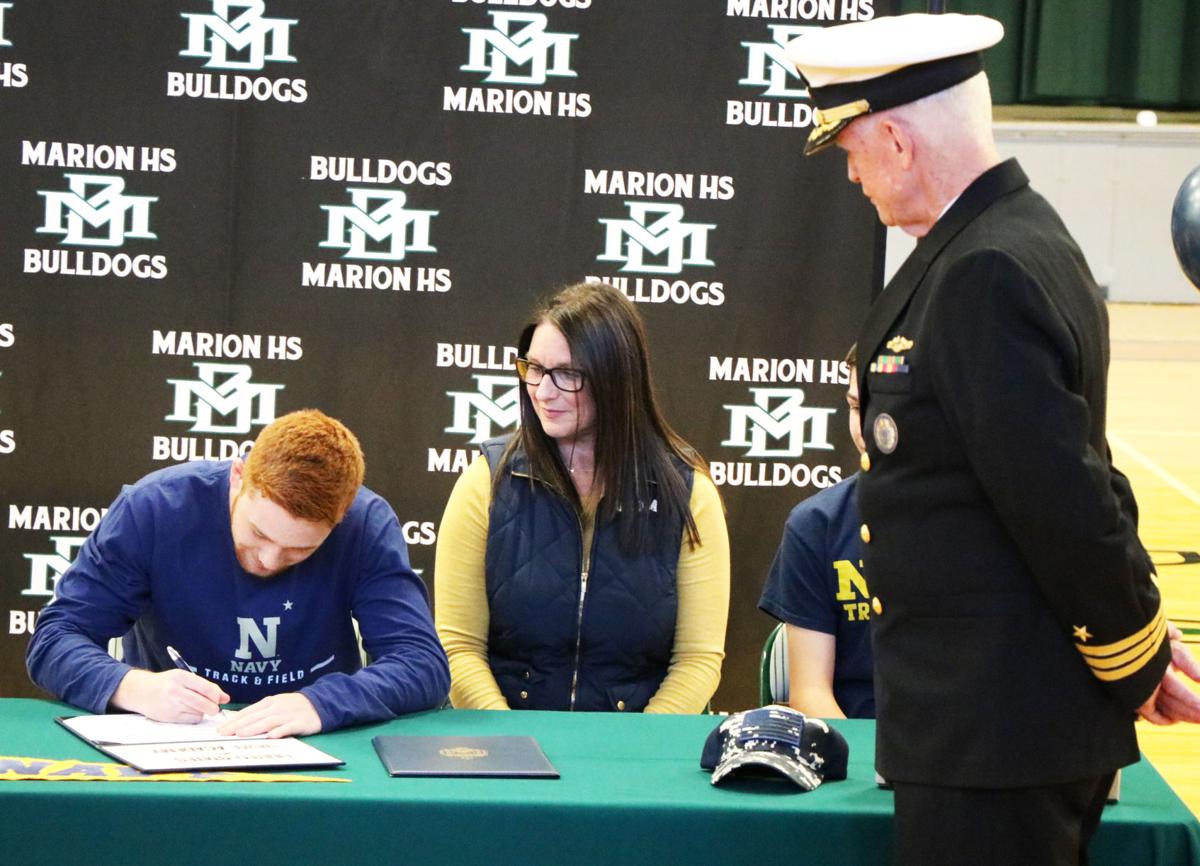 Marion's Walker Rudisaile signs his athletic scholarship to attend and pole vault at the Naval Academy, as his family and Naval officer J.K. Minton observe on Thursday, Feb. 6, 2020. 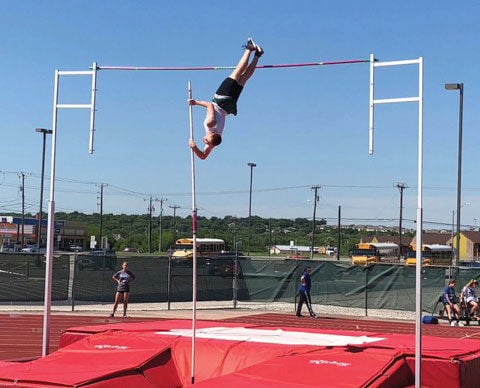 Marion's Walker Rudisaile pole vaults at a meet last year on his way to the 3A state championship. Rudisaile accepted an athlettic scholarship to vault for the Naval Academy on Thursday at Marion High School.

Marion's Walker Rudisaile signs his athletic scholarship to attend and pole vault at the Naval Academy, as his family and Naval officer J.K. Minton observe on Thursday, Feb. 6, 2020.

Marion's Walker Rudisaile pole vaults at a meet last year on his way to the 3A state championship. Rudisaile accepted an athlettic scholarship to vault for the Naval Academy on Thursday at Marion High School.

Walker Rudisaile never thought that his ability to use a pole to vault over a bar would lead to this.

The Marion senior signed and accepted a full athletic scholarship to pole vault for the Naval Academy on Thursday at Marion High School, in front of a packed gym of friends, family and supporters.

“My first meet ever (in the seventh grade) I no-heighted, I didn’t even clear a bar,” Rudisaile, 17, said after the signing on Thursday.

“But I won every meet in the eighth grade and I thought, ‘hey, I should pursue this.’”

Rudisaile found a coach for the pole vault and “ever since then, things just took off. I just fell in love with the sport and wanted to keep doing it.”

The hard work paid off last year, as Rudisaile won the 3A state championship with a vault of 15’6”, and in December, cleared 16’4” at a national meet in Reno, Nevada. That jump now has him ranked as the fifth-ranked pole vaulter in the sport nationally.

Rudisaile had offers from other NCAA Division I schools, but the road to the Naval Academy decision started, almost by chance, a year-and-a-half ago.

“I visited the campus and walked over to the indoor track facility,” Rudisaile said. “I snuck in the back door and went to look around, and I met the pole vault coach while I was there.”

It just so happened that the Academy was hosting a pole vault camp on the day that Rudisaile walked in.

He started the application process about a year ago, and kept in communication with the coach but, “they didn’t seem that interested,” Rudisaile said.

“Then out of nowhere I got a call from West Point and I thought that was where I was going to go — because they were interested in my vaulting. I let the Navy know that my jumps were getting higher and I was going to probably go to West Point —and they said, ‘No, don’t do that.’”

Idaho State, the University of Memphis and Texas Christian University in Fort Worth had shown interest in Rudisaile and made him offers to join their track teams.

“Idaho State offered me a full ride and I visited there,” Rudisaile said. “I liked the area, but I had to look at the opportunity that came with the Naval Academy that would set me apart in the future.”

Rudisaile’s granddad was in the Navy, and had some influence over his decision, which he made in January of this year.

“My grandfather was in the Navy and he’s been a big influence in my life,” Rudisaile said. “He talked to me about what they do — I don’t know what I want to do, but I knew I wanted to serve.

He finally made his choice over the holidays in January.

“I made the decision over New Year’s break that I was going to go the Naval Academy,” Rudisaile said. “I was in the moment and kind of saw my future in that moment — I knew that this was where I needed to be.”

After his gold medal winning jump at the UIL State Meet last year of 15’6”, Rudisaile attempted to clear 16 feet, a milestone for vaulters.

But while it didn’t happen at the meet, he cleared it shortly after the state competition.

“Right after the season ended I hit 16 feet,” Rudisaile said. “‘I’ve been slowly progressing, and at a meet in Reno a couple of weeks ago, I was jumping with all of the best high school guys in the nation.”

“We’re all actually friends now, but we were all jumping and supporting each other — and everybody was jumping big numbers.”

“I ended up with a PR of 16’4”, and as soon as the numbers went into Milesplit, I was the fifth-ranked jumper in the nation,” Rudisaile said.

Rudisaile still has his senior season to improve at Marion and has big goals.

“A state record will be really nice, but I definitely want to go over 17 feet,” he said.

Marion track coach Cliff Hill noted Rudisaile’s commitment to the sport in his introduction at the signing on Thursday.

“Something that sticks out to me about Walker is his passion for excellence,” Hill said. “Case in point, yesterday evening, it’s near dark, and he’s out there teaching some seventh grade kid how to pole vault in the sand.

“You don’t do that unless you have a passion for what you do.”

Rudisaile signed the scholarship given to him at the ceremony from Naval Blue and Gold officer J.K. Minton, who interviewed Rudisaile as part of the interview process for attendance to the Naval Academy.

“What we look for is their ability and motivation, because we know if somebody gets an appointment, they can make it,” Minton said. “Nobody transfers into the Academy, so you have no more than you start with in any one class.”

If he stays in the Navy, Rudisaile could end up on a ship, a submarine or could be a pilot in the Navy Air Corps, Minton said.