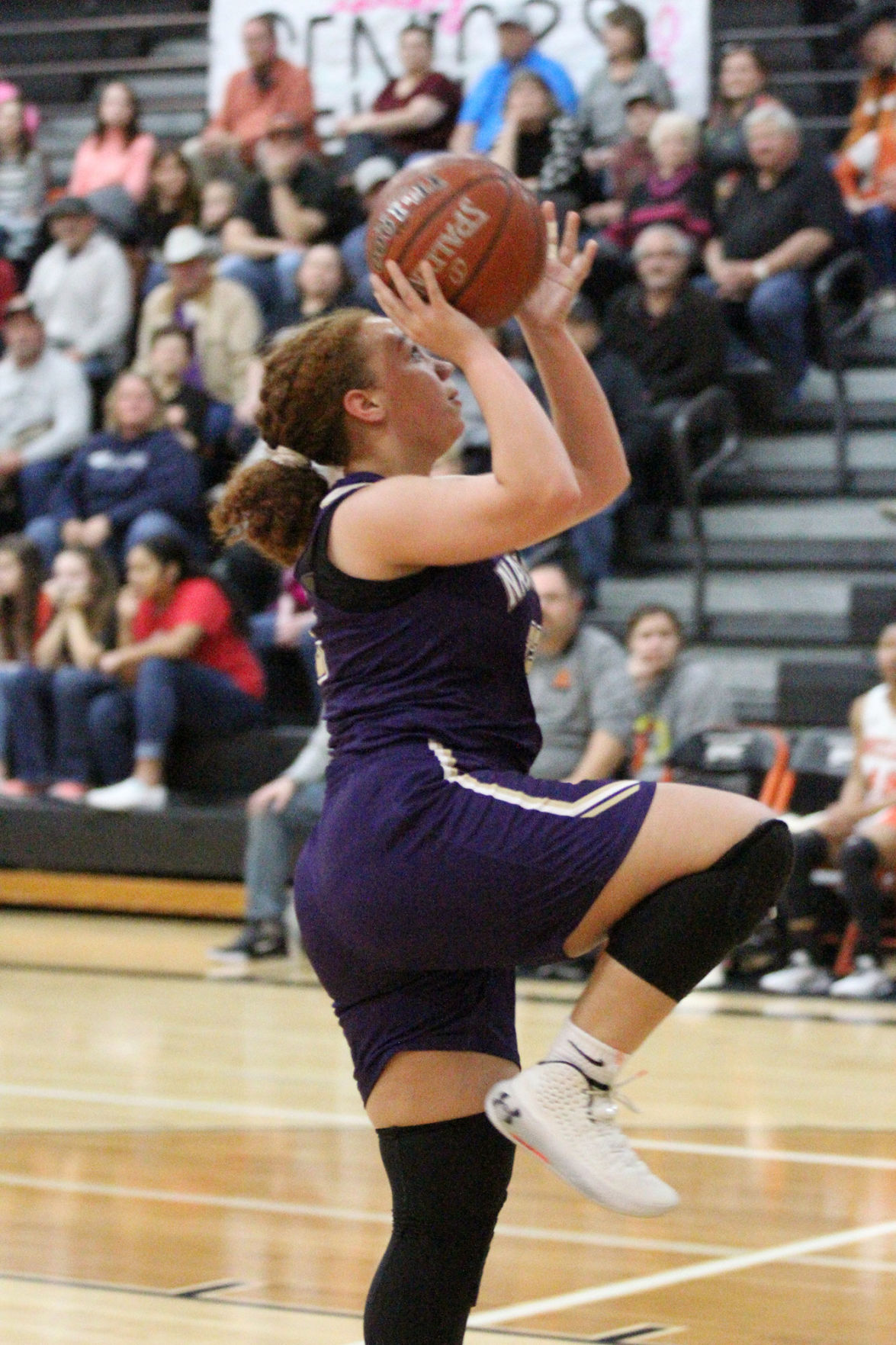 Navarro's Micayla Hawes drives in for a layup in the Lady Panthers' District 30-4A win over Gonzales on Friday, Jan. 31, 2020. The win put Navarro at 9-1 in district play. 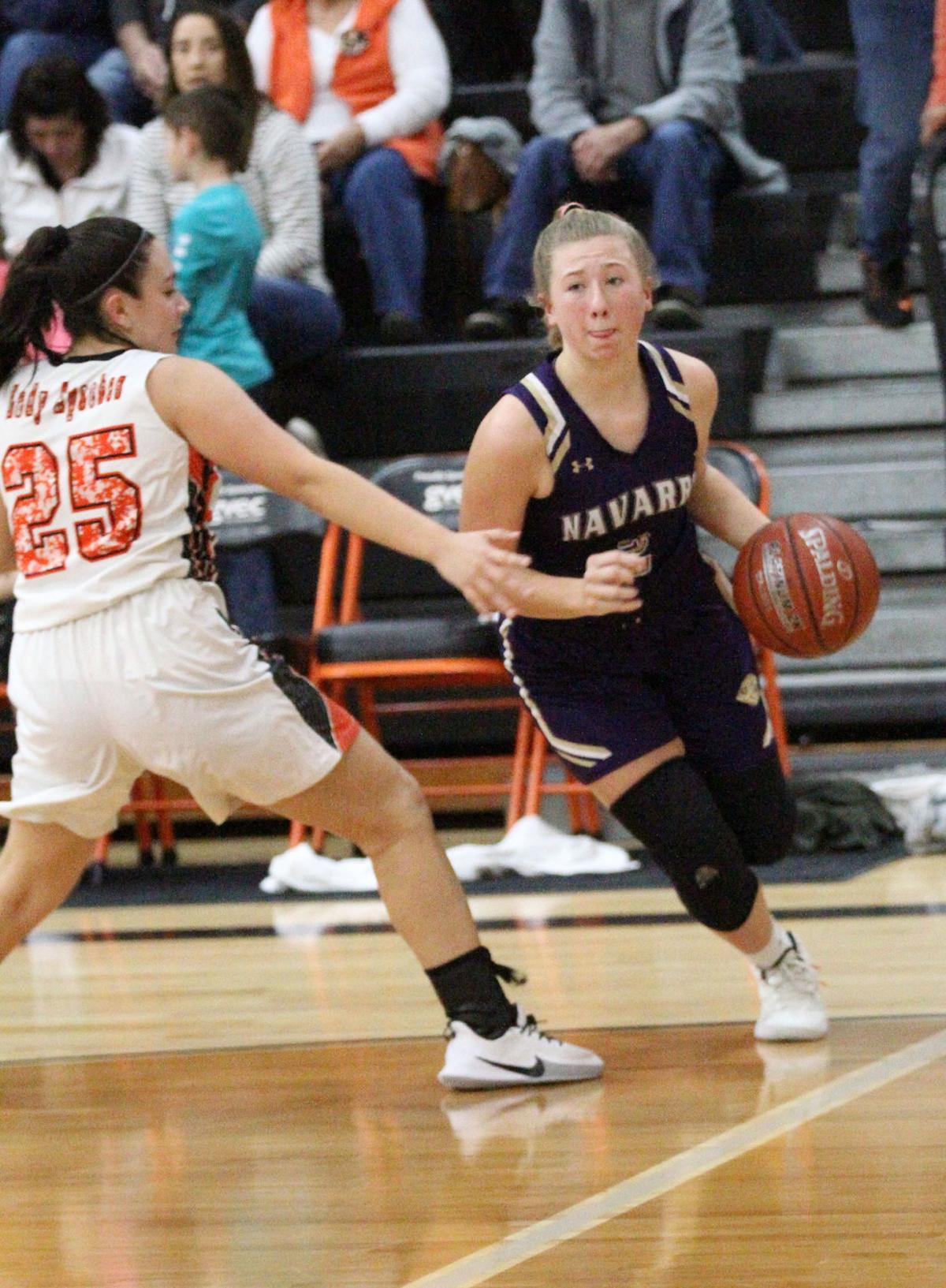 Navarro's Micayla Hawes drives in for a layup in the Lady Panthers' District 30-4A win over Gonzales on Friday, Jan. 31, 2020. The win put Navarro at 9-1 in district play.

Coaches preach defense to players all the time.

“Our offense comes off the defense, good defense leads to easy buckets on the other end of the floor,” coaches say.

That was the case Friday night in Gonzales, as the Navarro Lady Panthers and the Gonzales Lady Apaches were locked in a defensive struggle for most of the second half.

The Lady Panthers managed just 10 of those 24 points, but full court and half court traps created numerous turnovers from the Apaches, and Navarro gave up just three points in the fourth quarter to hold on for the win.

“We probably didn’t press as much as we normally do, but our half court defense tonight was probably the best I’ve ever seen,” head coach Darrell Harborth said after the game. “That was our plan, to come with more of our half court stuff tonight, because they use their tall girl to break our press and just throw over the top of it.

“We knew that would be a problem, so we came with a few different things that had their time for us.”

Navarro’s defense against 6-foot-2 post Devon Williams, the Lady Apaches’ leading scorer, was strong most of the night.

“Ryanne Hepp guarding her, she battled and competed all night,” Harborth said. “Occasionally she lost her and she got a few points in the third quarter, but overall, when you hold a team like this to 27 points — I’m super proud of how we played defense tonight.

“We came into tonight thinking we might even go zone against her, but we had the big first half offensively with 28 and keeping them to 13 — so why change then?”

The game may have been won in the second quarter, with Navarro holding on to a 14-12 lead with just over four minutes left in the half.

Navarro got two threes from the corner from Sara Benner, four points from leading scorer Tatum Harborth, and a couple of buckets from Hepp and Laylin Sturm to go on a 14-1 run to close out the half for the 28-13 lead.

“Benner hit a couple of big threes that helped us increase the lead and I think we kind of took their confidence from them a little bit,” Harborth said. “We just had to withstand the third and fourth quarter where we had some struggles scoring, but we did enough to get it done in a hostile environment.”

Williams was held to just two points in the half, and Gonzales’ three-point attempts were off the mark as the Navarro built the lead.

“They took a lot of threes in the first half, and luckily they didn’t make many,” Harborth said. “That was probably because we were pressuring them.”

Navarro had just three made buckets in the second half, missed several layups off steals and turnovers and had several jump shots go in and out as they struggled offensively.

“As good as the first half was, we probably missed four or five wide open layups,” Harborth said. “In the second half, we didn’t attack enough offensively and missed a few open shots.

“Our free throws weren’t good tonight either, I would like to see that a little better.”

For the game, Tatum Harborth led the lady Panthers with 17 points, while Sturm, Hepp and Benner chipped in with six points each.

The Lady Panthers have two games left to finish the run to the district championship.

The Lady Panthers take on La Vernia on Tuesday night at Navarro for a 6:30 p.m. tipoff.

Jayden Williams had 17 and Easton Allen, 14, to help the Bulldogs to the win.

The Marion girls got a non-district win over St. Anthony on Friday, 75-24. Lizzie Abrameit led the Bulldogs (1-4, 10-20 overall with 18 points, while Alicia Durbin had 11 and Anessa Madrid had nine in the win.