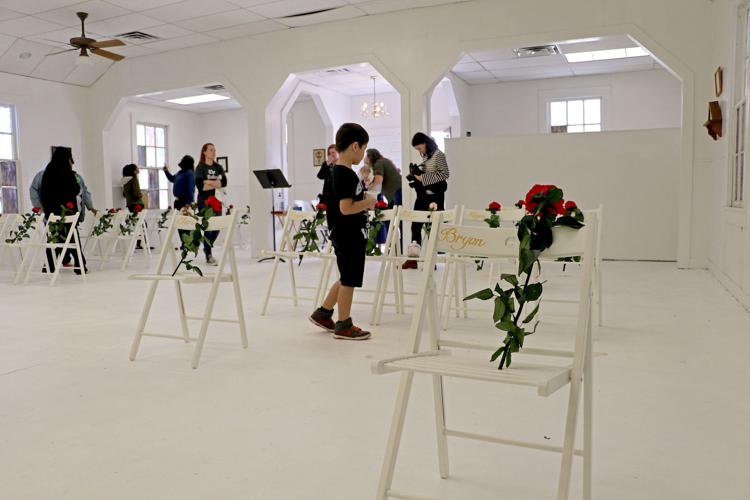 Visitors meander through the chairs in the memorial of First Baptist Church of Sutherland Springs on Sunday, Nov. 4, 2018. Each chair and rose signifies a victim who perished in the shooting. 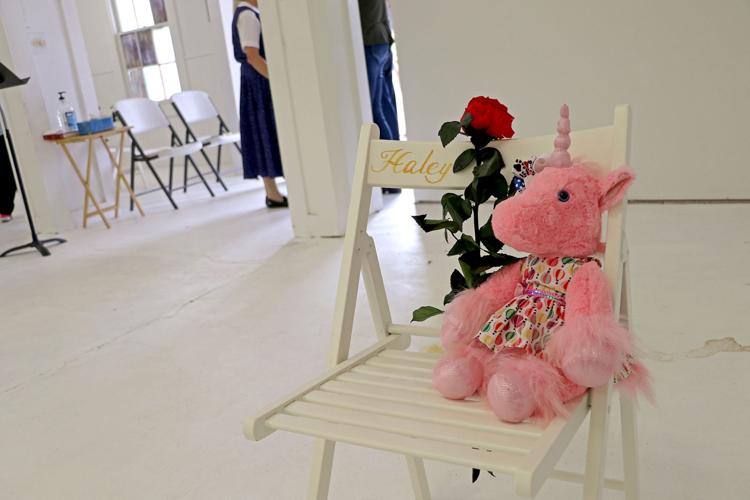 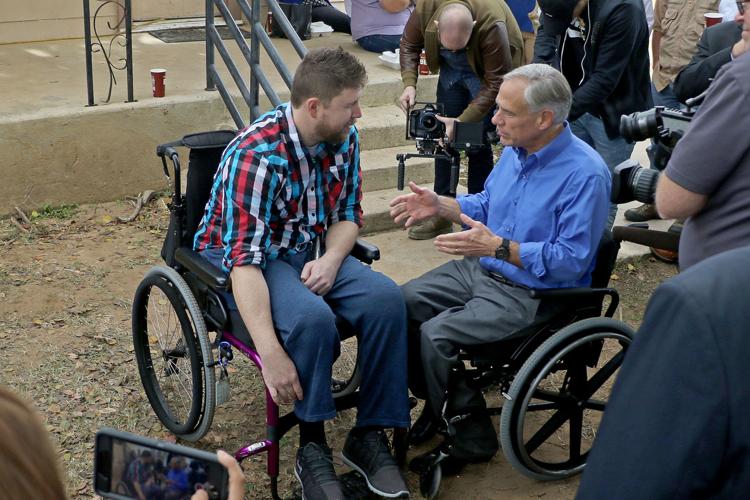 Texas Gov. Greg Abbott talks with Sutherland Springs survivor Kris Workman during the memorial celebration marking the first anniversary of the shooting held at the church on Sunday, Nov. 4, 2018.

Crosses, flowers and photos line the construction fence of the new of the First Baptist Church of Sutherland Springs on Sunday, Nov. 4, 2018 honoring the 26 victims who were killed one year ago.

Visitors meander through the chairs in the memorial of First Baptist Church of Sutherland Springs on Sunday, Nov. 4, 2018. Each chair and rose signifies a victim who perished in the shooting.

Texas Gov. Greg Abbott talks with Sutherland Springs survivor Kris Workman during the memorial celebration marking the first anniversary of the shooting held at the church on Sunday, Nov. 4, 2018.

The fence surrounding the white church in the heart of Sutherland Springs was adorned with signs of love and flowers on Sunday, the air filled with the smell of barbecue and the sounds of inspirational songs.

It had been almost one year since a gunman entered the First Baptist Church of Sutherland Springs and opened fire on the congregation gathered inside.

On this day, people were there to honor and remember the 26 people who lost their lives and to demonstrate the love and strength that held the tiny community together.

“There is somewhat mixed emotions — crowded, busy, but joyous,” First Baptist Church of Sutherland Springs pastor Frank Pomeroy said. “There is one part of me that misses those that can’t be here, but is a joyous part to see that the community is looking up, looking on and moving forward.”

Most of the guests took a moment inside the church that was transformed into a memorial honoring all of the victims and the survivors.

Among them were Sheri Kay, who lost her nephew and niece — Robert “Bob” and Shani Corrigan — in the shooting.

“It is hard because they are gone, but we know where they are,” Kay said. “This is a church who knows who God is.”

Kay, a member of the church, said she happened to miss church that morning after working a mid-shift at the Baptist hospital system in San Antonio.

“My phone was on vibrate and it was going off and going off and I finally got up and answered it,” she said. “It was my two children who were trying to get a hold of their cousins and were unable to reach them.”

The days, weeks and months after have been challenging, but the family is working through it, finding solace in knowing their loved ones are in good hands, Kay said.

“We have our moments. There is certain things that might happen that we remember. That is the way grief is,” she said. “I’m blessed because we know where they are. Like the pastor said in his sermon, we know that all 26 knew the Lord and they are in the hand of the Lord right now, so we can rejoice in that.”

Michelle Englert, a member of the Black Sheep Harley Davidson for Christ, came out with the group based out of New Braunfels to show their support for their fellow members — Pomeroy, and Rodney and Judy Green.

“What I love is that this church has nothing but love. They just give you such hope,” she said. “Even today, Pastor Frank’s message today about the memorial ... we’ve got to memorialize because this is God’s hands. God is going to wrap his arms around.”

“The horrific shooting that took place here could’ve ripped this community apart — but it didn’t,” Abbott said. “Instead, you came together and turned to the Lord for strength, guidance, and healing. While we may never fully understand why these things happen, we know it is through Him that we can overcome these challenges. Through Him, we have the hope and assurance that good always triumphs over evil. Together, we will work every day to honor the memory of those who died.”

The governor recalled receiving the phone call and making his way to the church to talk with officials, family members and survivors.

“I hugged with them, I cried with them, I prayed with them,” he said. “I found that far from the people of Sutherland Springs needing to be inspired, you were inspiring me and inspiring others because you were the revelation and the reflection of the face of God himself.”

Abbott also talked about meeting with the survivors in the hospital — particularly Kris Workman, who has a similar back injury.

“When I entered the room I saw Kris on the bed to my left with all types of medical devices and equipment in his body and his mother was on the right in a semi-inconsolable state, completely uncertain about what future was ahead for her son, who was now in this condition,” he said. “Having seen my own mom in that very same situation, decades ago, I knew once again I needed to summon some way to provide a sense of hope to Julie Workman for her son. Knowing that her son had been injured like I had the only thing I could think of was to tell Julie it is great to come and get to meet a young man who may be a future governor of the great state of Texas.”

Abbott said there was still one thing the community of Sutherland Springs had — hope.

“God is hope,” he said. “I’ve seen God at work in your lives because I see … you still cling to the one thing and the only thing that really matters, and that is embracing God in your lives knowing that God works through you for the betterment of his world.”

Pomeroy agreed, adding that the events of that day brought the community together.

“The tragedy doesn’t define us, it is just another step in who we’ve become and I think that the community has grown even more cohesive,” he said. “Sutherland Springs is a community ... we wrap arms around one another, we hold one another whether you are a member of this church or not. It doesn’t matter. We lean on one another and help each other get through the trying times. It is a loving community.”

It is that strength that has carried the survivors through, Kay said.

“I just hope that the people that are here see Christ in us and know that is where our strength comes from and that is how we get through this,” she said. “God is the source of true strength and true joy.”

Pomeroy, whose daughter — Annabelle — was among the 26 killed, said that day has changed how he approaches life.

“I knew and have preached on the shortness of life,” he said. “I know that it can be taken quickly, but this has shown me how tangible it can be and now I choose to live more for today.”

Felicia Frazar is the assistant editor of the Seguin Gazette. You can e-mail her at felicia.frazar@seguingazette.com

Success! An email has been sent to with a link to confirm list signup.

Error! There was an error processing your request.