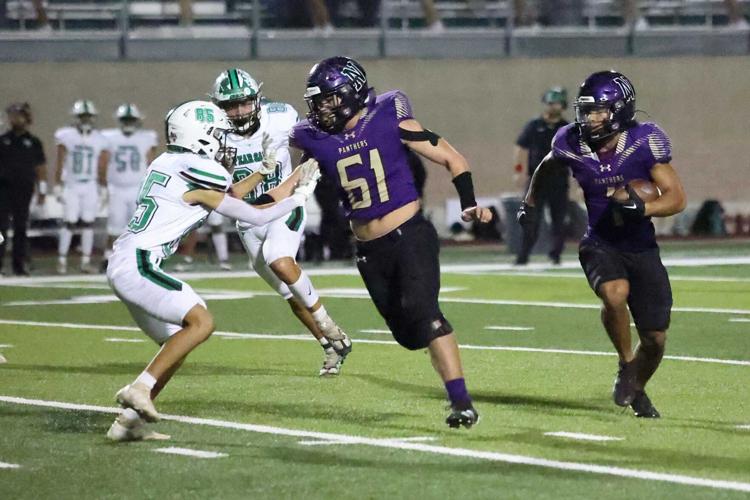 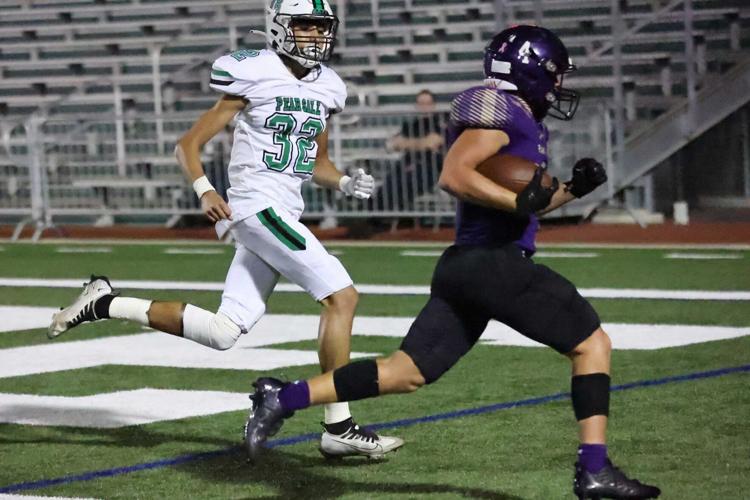 Panther running back Colton Chambers crosses the goal line for a touchdown against the Mavericks on Thursday, Nov. 10, 2022 in San Antonio. 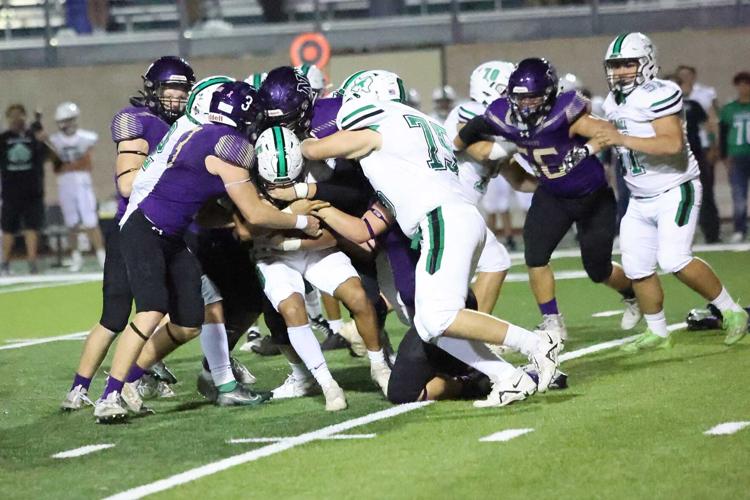 A pack of Panthers surround a Maverick to keep him from advancing during the bi-district playoff game on Thursday, Nov. 10, 2022 in San Antonio.

Panther running back Colton Chambers crosses the goal line for a touchdown against the Mavericks on Thursday, Nov. 10, 2022 in San Antonio.

A pack of Panthers surround a Maverick to keep him from advancing during the bi-district playoff game on Thursday, Nov. 10, 2022 in San Antonio.

SAN ANTONIO — The first round of the playoffs seems to have become a formality for Navarro football.

On Friday, the Panthers (7-4) walloped the Pearsall Mavericks (7-4) by a 50-8 score to win their opening round playoff game for the 11th straight year.

The win was similar to many of those previous victories as the Panthers rolled up 443 rushing yards and seven rushing touchdowns. Antwoin Mebane led the way with 158 yards and two touchdowns on 10 carries. Colton Chambers added 97 yards and one touchdown on 10 carries for Navarro.

Their defense was also on the top of its game, holding the Mavericks to just one score on their only real threat of the night. They also forced three turnovers and nabbed two sacks.

The Panthers jumped out to a 22-0 first-half lead. Running backs Kohen Blount, Diego Chapa and Mebane put those points on the board with runs of 2, 2 and 48 yards, respectively. Chapa and Blount also scored on two-point conversions.

The Mavericks answered late in the half on a trick play — a double pass that resulted in a 31-yard touchdown completion.

That gave Pearsall momentum heading into halftime but the rest of the contest was all Navarro.

On the opening drive of the half, Panthers’ defensive back Gabriel Rangel forced a fumble that was booted and then recovered by lineman Knox Gallini at the Mavericks’ 27-yard line.

Mebane took the handoff on the next play and appeared to be wrapped up by three defenders at the line of scrimmage. But he somehow broke out of it and found open field and his second touchdown of the night.

Linebacker Nick Schwarzlose ended Pearsall’s next series with an interception and that was followed by quarterback Bryce Nall running 17 yards for another Panthers’ touchdown.

Chambers scored on a 25-yard run late in the quarter and Chapa added one more in the fourth — a six-yard run that was set up running back Gabriel Rangel’s 72-yard run.

Navarro head coach Rod Blount, who is 51-14 in his five years at the school, had expressed concern about how his team would respond after three weeks without a competitive game. But he said his squad responded well.

“We were a little rusty at first but we eventually got into a rhythm on both sides of the ball,” he said. “The kids didn’t get phased by some of the calls going against us or other adversity and just focused on the next play. I thought our offensive line got good movement all night on a defensive front that had given opponents a lot of problems this year.”

The Panthers now advance to a meeting with the Bishop Badgers, who blanked West Oso 24-0 in their first-round matchup. The teams will meet in Jourdanton next Thursday night at 7 p.m.

Writer’s note: Thanks to Colten Magin for his assistance with this report.

Scot Kibbe is a regular contributor to the Seguin Gazette. He has covered Navarro football for 31 years.

Success! An email has been sent to with a link to confirm list signup.

Error! There was an error processing your request.